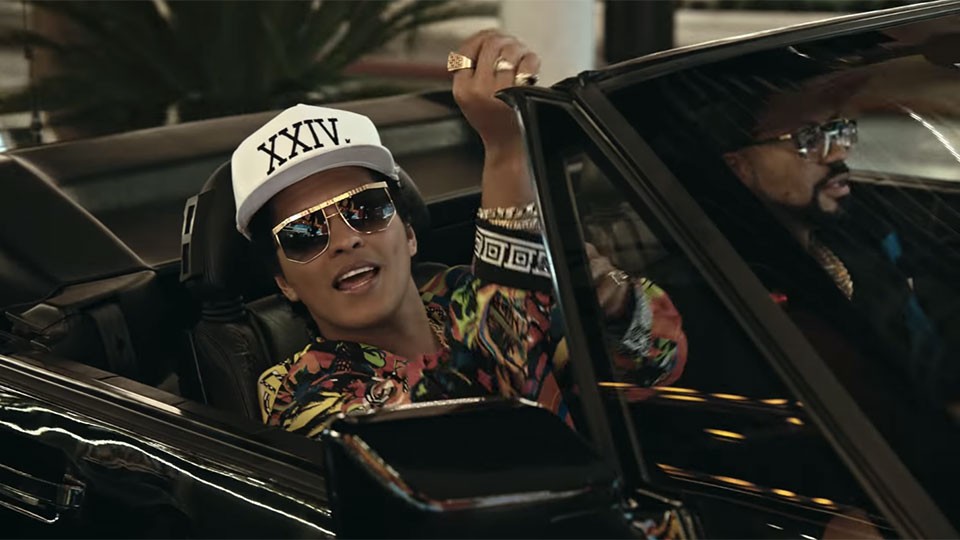 As Bruno Mars reveals the first single off his new album, Getintothis’ Shaun Ponsonby wonders when he is going to get an identity of his own.

Bruno Mars dropped the first single from his upcoming album a few days ago. It’s called 24K Magic, and as a frivolous pop song it isn’t bad. It is certainly a foot stomper, and he appears to be parodying some of the more chauvinistic behaviour we see in pop. It is somewhat enjoyable.

However, it is becoming increasingly apparent to me that there is a massive quandary about Bruno Mars. And it’s not even that I don’t think he is cool enough to pull off the cool persona he is trying to reflect (though that is true). The thing is as a pop star I think he’s okay, definitely one of the ones I can at least stomach. He is an energetic performer and a decent enough songwriter. The problem is that he has no musical identity of his own. Really think about it; Bruno Mars is always reminding me that I quite like other people.

This has always been the case to a point, but it seems to be increasing. His first album, which has the unfortunate task of having to live up to its pretty awesome title of Doo Wops and Hooligans, has a few songs peppered in there that remind you of other people. On stage, he would perform a James Brown-type breakdown in Runaway Baby, but that seemed like an intentional homage rather than a lack of originality.

Also from that album is the aptly titled The Lazy Song, which is basically Daniel Powter or something. The kind of thing a real “bro” would write. You know the kind I mean. Bruno lazes about doing nothing, proudly proclaiming he isn’t going to get that degree that has left me thousands in debt and making reference his gigglestick a disturbing number of times.

It was his second album, Unorthodox Jukebox (I swear his album titles are his best asset) where Mars fully embraced his ability to ape other artists. On the album’s first single, Locked Out of Heaven, he was being The Police. On Treasure, he seemed to be doing a 70s Gamble and Huff or Earth Wind & Fire song and matches it with a video that is a clear homage to the latter’s Let’s Groove. More recently, on Uptown Funk he embodies The Time, especially the persona of frontman Morris Day.

Truth be told, I don’t mind this. I actually quite like Treasure and – despite how overplayed it got – Uptown Funk. They may be mere pastiches, but I’d take it over the whiny and borderline psychotic Grenade.

Not that it always works. Gorilla was a particularly dumb song. He was trying to be Prince on that one, except he can’t quite pull off the sex God schtick like Prince. The problem I find with Mars is that he is a razzle dazzle kind of guy – which I’m all for, incidentally – and when he starts getting intense it comes across like Phillip Schofield hitting on you. It’s just not going to be a massive turn on.

Plus, watch Schofield on This Morning and tell me he gives a fuck about anything they’re talking about. That tends to be how I feel about Mars – he has read the text books and knows the theory, but he hasn’t passed the practical. There’s a bit of a vacuum. Gorilla is a good example of that. He knows what a sexual image is, but doesn’t understand what makes it sexy.

The hook in Gorilla is “You’ll be banging on my chest baby, gorilla/You and me, baby, making love like gorillas”. Let’s just think about that for just a second. Firstly, why is she banging on your chest? If you are having sex and your partner is banging on your chest, then I must question whether said sex is consensual. Given that the way male gorillas incite sex is by walking up to the female and grunting at their genitalia (Trump-like, if you will), this might actually explain the song a little better.

Secondly, not only are gorillas not sexy, but they have very small penises in relation to the rest of their body – about 3cm on average – and many only have sex for a matter of seconds in most cases. Believe me, I found this out the hard way.

Regular moaning and occasional pointless analysis is common in Cosmic Slop. If you’re the kind of massochist who finds that entertaining, click here.

So, yeah, I don’t like Gorilla. Like many pop songs about sex, it comes across a little like Bruno doesn’t know what sex is. I’m no expert either, but at least I’ve seen drawings of people copulating in biology text books. It’s closer to the Starland Vocal Band’s Afternoon Delight than it is Prince’s Sexy MF.

So, what about this new one? Does 24K Magic finally break Bruno’s run of songs that sound like other people? Of course it doesn’t, it just sounds like 80s funk band Zapp. It’s funky, electronic, a little robotic and its lyrical obsessions are similar. Incidentally, Zapp ended when leaders – and brothers – Roger and Larry Troutman died in a murder-suicide. That has nothing to do with anything, it’s just vaguely interesting.

24K Magic opens with a talkbox that sounds like 2Pac’s California Love, and after that it is just Zapp, although he is still cultivating the Morris Day persona from Uptown Funk, which is no surprise given how successful that single was. In fact, he does Day’s signature squawk at one point.

I maintain he’s not quite cool to pull it off though. He succeeds with the line “Everywhere I go they be like ‘ooh, playa’” about as well as Will Smith pulled off the line “Many have died trying to stop my show” in Boom! Shake The Room. You can’t help but look at them both and say “Let’s be honest, that never happened”, like if the Tories said they care about poor people, or if I told you I had dinner with friends last night. Unlike Day, he is way too safe to be funny enough to pull off the necessary outrageousness.

Which is all fine as far as I’m concerned in theory; pop doesn’t always have to be progressive and push things forward. Sometimes you just want a good dance song on the radio. Except people working on the album with Mars, such as Skrillex and band member Jamareo Artis have described the album by claiming it “sounds like nothing else that’s happened before” and “it’s going to have a new sound”, which isn’t true judging by the first single.

There is only so far you can go if all you ever do is recreate other people’s styles. Mars’ exploration of these influences in his own work amount to the equivalent of him trying on jumpers in Topman, not sure which one he really likes. He still hasn’t settled on exactly which one he wants, but he’s aware that he kind of suited the red one, even though it is slightly out of his price range. It’s almost like the opposite side of the Led Zeppelin coin; they full-on plagiarised material (and there is a Willie Dixon case they lost for Whole Lotta Love to back this up, rockist snobs, so don’t bother questioning it), but made it sound like them. Bruno Mars is writing his own material, but none of it sounds like him. It is frustrating, because he is clearly talented.

Still, I look forward to the day Bruno Mars does a Matt Goss and takes over Vegas. Admit it, it is inevitable.

Leonard Cohen says he is “ready to die“. Hold off, Len. We’ve lost too many this year as it is.

Looking at the line-up for the EMA‘s is making me lick my cosmic lips. It is going to be even better/worse than the BRITS!

I say we all club together and buy Prince‘s Vault, if it is up for sale.