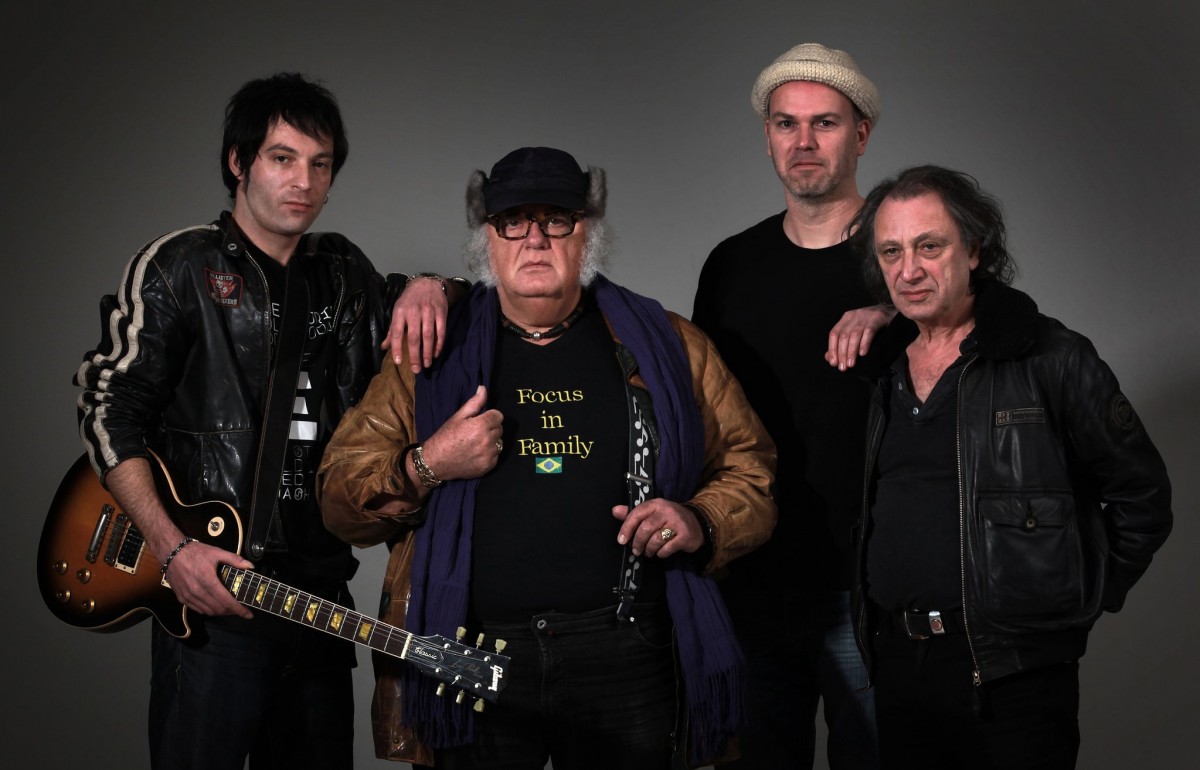 As Focus rolled in to Liverpool’s Epstein Theatre, Getintothis’ Benjamin Duvall enjoys a night of preposterous silliness alongside a technical prog-rock masterclass.

With a crowd comprised overwhelmingly of loyal fans – the vast majority seemingly onboard since the band’s beginnings in the late sixties, and with tucked in t-shirts and silver ponytails aplenty, it was a good night for real ale sales and a bad night to be in the queue for the gents, as Focus took to the stage of the Epstein Theatre.

Ambling on for the first half, organist/vocalist and group founder Thijs van Leer, decked out in a resplendent pink jacket, settled himself behind a weathered the-stories-I-could-tell Hammond Organ with the words FOCUS visible in peeling block electrical tape on the front. Around him the slight but poised frame of drummer Pierre van der Linden, leather-jacketed guitarist Menno Gootjes and oak-like bassist Bobby Jacobs assumed the position to a warm so-good-to-see-you-again welcome from the crowd.

Opening with the atmospherics of Focus 1, pairing a languid guitar lead against baroque organ and soft rock rhythm section – perfectly complementing the immense curtain of dry ice cloaking the stage – the group hit its stride with second tune House of the King (aka the one used as the theme from Saxondale). Moving from an opening Medieval flute fanfare to a driving slice of propulsive whimsy, complete with audience-encouraged handclap backbeat, van Leer switched between flute and organ, cracking a grin and politely headbanging in time with the rest of the crowd while the rest of the band cranked up a notch.

As they briskly hit the next couple of numbers the fundamentals of the Focus sound began to lock into position like a cheery well-oiled machine. At the forefront, the harmonising melodies of organ, flute and bright, fuzzed guitar built on a bedrock of baroque, jazz and flamenco flourishes, came off like Pink Floyd without the blues influences. This helped create a distinctly European pastoral atmosphere with the sudden plunges into chunky power chords dotted throughout lending the material a thrilling edge. Tasteful splashes of delay helped to elevate some of the more earthbound material into a headier space without going full Darkside, emphasising the hippie elements of krautrock without its motorik influences.

In its place was a rhythm section switching between a punchy dexterity and a range of moods from Experience-era Hendrix tom-tom roll-arounds to remarkably subtle time-signature changes, all fantastically directed by drummer Pierre van der Linden. Exuding the class of a well-travelled old pro, the sticksman played with the kind of jazz-inflected technique only found in rockers of a certain age; a busy, lighter-touched approach to rhythm drawing on the flashy drummers of the big-band/early-jazz era. This bubbled to the forefront every time the band hit a surprisingly heavy bit of riffage with rattling toms and crashes of accenting cymbals.

After treating the crowd to cuts from Focus 1-3, the smiling, mischievous figure of Thijs van Leer explained that “We would like to play a song that is a little bit longer than the normal pop song” prompting an excited, hop-fuelled shout of “ERUPTION!” from a member of the audience, as the group navigated exactly the sort of multi-part quasi-symphonic opus that one would expect to hear from a Dutch prog group, attempting to tell the tale of Orpheus and Euridice in a hard rock style.

Executing a series of razor-sharp stops, left-turns into quasi Bardo Pond flute reveries and much athletic reprisal of instrumental themes, you could feel the band flexing some serious technical feats. This was greatly enhanced by shared beaming looks between drums and keys at every tricksy turnaround, seemingly in awe of the sound of it all despite having been playing the piece for the best part of 40 years.

At this point guitarist Menno Gootjes – blessed with a first name custom built to be shouted appreciatively by drunk scousers – dispensed some genuinely beautiful volume-swelled guitar, a technique reprised several times throughout the evening and never failing to sound anything less than otherworldly. Eruption over, the quartet moved through some deliciously old-school showbiz staples with, in turn: a jazzy number boasting call-and-response scat singing from van Leer and audience, a drum solo (the first of two), an auto-wah’d funk bass interlude, and the concluding number of the first half, the choppy-Whistle Test highlight Sylvia.

Post-interval (during which van Leer roamed the lobby eating ice cream out of a tub) the band kicked off with a brace of new tunes that allowed Menno to throw some decidedly NWOBHM galloping chugs into the mix, before unveiling a melodica-led slow burner that could best be described as Gallic Reggae, complete with a wistful whistling melody that lent the whole thing a melancholic dignity; a feat both improbable and near-impossible given the musical elements at play.

More volume-swell guitar gave way to a couple of fast rockers, including a pop punk-in-Middle-Earth power chord thrasher called Peace March that seemed to acknowledge its own ridiculousness while simultaneously convincing with its sheer gusto, prompting a few standing fist pumps and shouts of “GO ‘EAD MENNO” from sections of the crowd. Some lengthy improvised sounding interludes followed, remarkably tasteful in terms of restraint and invention and giving Tijs van Leer the chance to showcase a still-impressive vocal range. Making heroic leaps across the octaves and indulging in some inventive vocoder work, the founder member of the group temporarily dropped the winking asides, thumbs up signs and mad uncle grins that had categorised his performance for the previous hour and a half to play a heartfelt wordless, vocoder fugue at odds with much of the surrounding bombast.

A solo moment for Menno to do his thing brought much appreciation from the getting-livelier audience before drummer van der Linden and bassist Bobby Jacobs each got a turn supplying more Buddy Rich-esque razzmatazz and oh-so-seventies fuzz wah bass noodling. At this point the collective anticipation for the inimitable Hocus Pocus became highly tangible, its signature riff hinted at by each of the musicians’ solo moments in a masterful display of high concept musical teasing.

When it finally arrived it didn’t disappoint, van Leer gracefully choosing not to go for the kettle-whistlingly high yodelling vocals of yore on the higher runs and letting Menno‘s guitar and the audience do the heavy lifting, drums and bass thundering along behind him. The inherent ridiculousness of a room full of old rockers attempting to hit pitches testing to a castrato was fully acknowledged by van Leer, cupping his hand to his ear and grinning manically at the crowd’s efforts, reinforcing the general mood of the evening which struck a well crafted balance between easy-on-the-ear technical flashes and unashamed silliness.

Abstracted to a running time of close to twenty minutes in length and boasting a round of introductions and thanks to band members, crew and of course – this being tried and tested show business of a very particular type – the audience, the tune encompassed everything that made the performance an impressive evening’s entertainment.

The evident rapport and glee between the two long standing principals of van Leer and van der Linden coupled with the suitably dignified showmanship of the younger guitarists showcased the material wonderfully, creating a performance where preposterousness and serious enthusiasm could exist quite comfortably together.