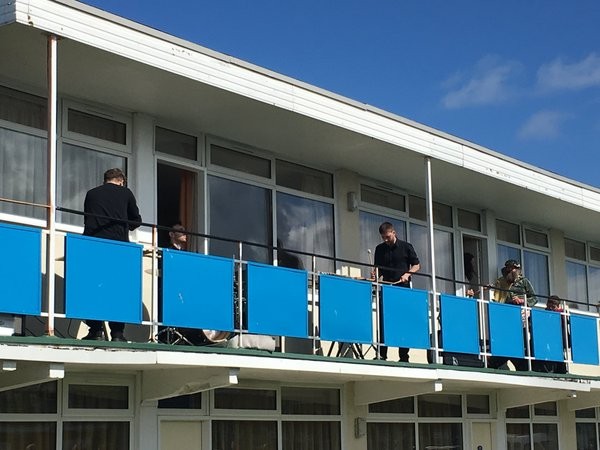 As ATP finally cancel the Drive Like Jehu festival, Getintothis’ Paul Higham looks back at the Stewart Lee event and wonders if this marks the final nail in the coffin for the holiday camp festival.

Oh Barry, oh ATP, where did it all go wrong? It wasn’t meant to end like this. The revival of the holiday camp festival template following the End of an Era run in 2013 had promised to revive the ailing brand and restore relationships that had been pushed to the point of breaking following the last-minute cancellation of 2014’s Jabberwocky event.

Yet as festival-goers awoke this morning at Prestatyn Pontins following the end of the Stewart Lee hosted event, they were greeted with the news that next week’s Drive Like Jehu-curated festival, already relocated from Prestatyn Pontins to Manchester, was finally to be cancelled.

This provided confirmation of rumours that had circulated all weekend and which culminated in it effectively becoming common knowledge on-site during Sunday evening.

Similar to the confusion of last month’s ‘has it or hasn’t it been cancelled’ social media furore, the method of the communication left a lot to be desired. Rather than be upfront, it was left to Drive Like Jehu to break the news by providing an understandably frustrated confirmation on their Facebook page.

Although an official announcement by ATP followed later in the morning, for a time you were still able to book tickets for the event through the ATP website, despite Drive Like Jehu’s definitive cancellation statement.

It is this apparent duplicity that has angered many long-term fans and one-time enthusiastic supporters of the event. Amid the many questions that remain unanswered, the most pertinent is when did ATP become aware that the Drive Like Jehu event was unlikely to go ahead?

Did they know at the point it was transferred to Manchester when presumably festival-goers were forced to make additional travel plans at, no doubt, additional cost?

Cryptically Mick Collins of The Gories has suggested on social media that ATP hadn’t yet fulfilled its agreed obligations to arrange the band’s travel to the event. Given that the event was due to take place this coming weekend it does appear a case of organisers being unwilling to commit to costs for an event that they knew was unlikely to take place.

@EwanRussell @thelexington ATP were supposed to buy our plane tickets and didn’t, so while we’d love to, we can’t.

All this is likely to mean the end of ATP as a credible festival organiser. Its reputation has now reached a new low from which it will surely struggle to recover, with any sense of trust and lingering goodwill appearing now to have been irrevocably eroded.

As festival-goers increasingly seem unwilling to part with cash to buy tickets and bands, fearful of not getting paid and being left out of pocket, will equally be reluctant to perform. Without punters and performers you’re not left with much remaining.

Throughout the recent weekend there were on-site rumours of artists not being paid to perform. Roky Erickson and his band performed seemingly out of a sense of duty to fans while citing from on-stage an on-going dispute with festival organisers. John Cale pulled out at short notice suggesting that they had been let down by ATP.

When one of the key members of the band that performed the song from which the event takes its name withdraws from it a under a cloud it cannot make for good PR.

regrettably, @therealjohncale‘s ATP shows now canceled.”we did our best to believe in the organizers, in the end, they let us all down” – jc

Now while we instinctively don’t like talking about money, much of the issues do seem to stem from bands not getting paid. Rightly we’d much like to talk solely about the fantastic art and not sully it by placing a financial value on it. But therein lies the crux. Art needs money in order to be produced; artists need financial security to invest in the fundamentals such as equipment, rehearsal space and time, as well to provide the space to be creative.

In the current climate the first rule must be that everyone gets paid. There can be no excuses for not paying artists. If it is true that artists have not been getting paid and are being left out of pocket then that is unforgiveable. ATP merit all the opprobrium that comes their way.

As such there was something of an uneasy atmosphere as the weekend’s event at Prestatyn began. There was a strong sense that this would be the last happening we would experience. Curator Stewart Lee confronted it head on during a comedy routine on Friday night. It felt like a piercing denunciation of ATP delivered from behind the protective shield of alternative comedy.

Despite apparent jokes that Stage 3 was being moved to Manchester and shuttle buses would be running, you could sense his anger and frustration that the whole ATP edifice was crumbling around him.

Yet amid the rumours, the sense of chaos and the downbeat atmosphere, was a weekend that mainly lived up to its billing and offered something of a characteristically authentic ATP experience.

Offering an insight into Lee’s musical upbringing, the weekend lent heavily on the world of post-punk with a terrific set from The Nightingales, a high energy set from The Ex and a typically abrasive and idiosyncratic set from The Fall.

Indeed Saturday evening set by The Ex felt like the moment the festival came alive. The bigger picture issues that had hitherto dominated felt cast aside as people lived in the moment. The reciprocal energy that rebounded from stage to crowd and back again felt truly infectious.

Sunday afternoon belonged to Boredoms. After having performed last year with a circle of 88 cymbal players this was a pared-back, single, 80-minutes-in-duration piece, performed as a trio. Claiming the prize for the most bizarre stage set-up of the weekend, they began by playing a series of suspended horizontal metal poles in a difficult and very avant-garde opening.

Where an earlier performance at Jeff Mangum‘s ATP in 2012 was intense and pummelling, this outing was more restrained and varied, weaving through textures and warped electronica with intoxicating ease. Played to a live-filmed backdrop of crockery jumping between two pulsating bass-cones, the music shifted from chaos to order and back to chaos, making for an utterly transfixing experience.

Other high-points included moments of intense and enveloping psychedelia from The Heads and Bardo Pond. During the latter’s woozy, dreamlike and utterly immersive Sunday evening wall of sound set they offered thanks to Barry and Deborah of ATP. This suggests that the bond between artist and organiser was not wholly broken and, among certain acts, a residual loyalty remains.

What was noticeable was the near absence of audience reaction. Where once this may have induced a collective whoop of support was greeted only by silence and murmurings of discontent. It felt telling.

The festival revealed Lee’s affection for folk, and in particular a brand of progressive folk and avant-garde inspired experimentalism. Trembling Bells excelled with their distinctive blend of pastoral traditions with psychedelic wig-outs and free-form folk. The smaller third stage saw a wealth of collaborative performances reminding of the ATP tradition in providing a platform for the one-off and the unique.

If the festival had nonetheless felt understandably downbeat and lacking in any overall standout moments. Sunday lunchtime did offer a welcome moment of genuine magic. Ex-Easter Island Head, fresh from a triumphant, packed-out and rapturously received impromptu performance on Friday evening, set-up on the balcony outside their chalet and began to play.

As word spread, an ever-growing crowd gathered and a frisson of excitement was felt. It felt special seeing the band get their moment in the sun and introducing themselves to new fans and acting as a reminder of the halcyon days of ATP, when moments like this felt like a regular occurrence.

In spite of all the problems it did prove to be a highly enjoyable weekend, one in which the on-site experience differed from the more visceral anger expressed on social media. Yet by Monday morning, it became clear that for even the most staunch defenders of ATP, patience had worn thin. There are only so many times that you can defend the indefensible while retaining credibility, irrespective of how much fun has been had.

Does it mean the end of festivals that celebrate the niche and the alternative? Is there an inherent barrier to operating such events on a sensible commercial footing? Festivals such as Liverpool International Festival of Psychedelia suggest this not to be the case.

In many ways ATP feels like it has run its course. Its raison d’etre seemed initially to provide a platform for alternative acts of the late 80s and 90s that were overlooked at the time. While it has tried to expand its brief, it has felt somewhat shackled. As much as it tries to champion emerging artists it will remain indelibly associated with the likes of Dinosaur Jr, Shellac and Slint.

That has had an effect on its audiences. There’s no escaping it, long term devotees and their core base are getting older. The average age of the festival feels to be heading that way too. It hasn’t seemed to resonate with the young in the way it needs to to remain viable. With age comes responsibility, we can’t all commit to carefree hedonistic weekends in the way we were once able. It seems that their market and therefore demand has contracted.

Perhaps it’s the acts being booked that have contributed too.

Maybe Drive Like Jehu was just too niche, especially for an event scheduled the weekend after a similar event. You can’t, it appears, spread yourself so thinly and remain viable.

A cursory scan of the acts booked indicates a festival looking to the past, content to bask in a sense of nostalgia without really engaging with a more youthful audience that would provide new demand. Has alternative music become the new dad-rock, maligned by a new generation more keen to look forward with a time-honoured rebellious streak?

You can’t help but feel that in its current form, ATP no longer feels relevant. Barry Hogan seemed to recognise this three years ago when he signalled the end of the holiday camp festival blueprint. Despite appearing to effect a change with the ATP 2.0 rebrand it appears not enough has actually altered. If it felt broken then, nothing has since suggested that it has been fixed.

For a festival that has built its reputation on a sense of communality, where the lines between audience, performers and organisers are increasingly blurred, its apparent demise is tinged with sadness. ATP has long celebrated the niche and the obscure, taking risks to put on defiantly alternative acts that operate far from the mainstream. It just seems now a risk too far for both artists and the paying public alike.

As the passage of time allows the current mood of anger to dissipate we can hope that ATP and its festivals will be remembered for their cultural value rather than its ultimately fractured and disharmonious relationships. Let’s not see its memory further tarnished; as sad as it is, it’s time to go and time to move on.

You’ve given us some of our best experiences, contributed vastly to our education and shaped our collective outlooks. Let’s hold that memory and hope someone is able to pick up the baton, champion alternative music and make it financially viable.