As Liverpool Psych Fest celebrates its 5th anniversary, Getintothis’ Paul Higham brings news of a stellar line-up for the 2016 version of this much loved event.

What begun inauspiciously in 2012 as a low-key single day celebration of whacked-out music in its many and varied forms has since cemented itself as one of Liverpool’s most loved festivals, becoming a permanent fixture in our early autumn calendar. Having expanded to two days in 2013, last year saw Liverpool International Festival of Psychedelia expand geographically, taking in District alongside its spiritual home at Camp and Furnace.

With 2015 demonstrating more of a festival feel, the announcement of its line-up for 2016 perfectly illustrates the stature of the event, its confidence and its ambition. Seeking to combine the biggest names while remaining committed to unearthing some of the more eclectic and esoteric talents from the farthest corners of the world, revered Welsh experimenters Super Furry Animals will be returning to Liverpool to headline.

Do you agree with our Super Furry Animals top 10? Check out our countdown here

Joining Super Furry Animals as headline acts will be Southend’s The Horrors, whose recent run of albums, culminating in 2014’s Luminous, has revealed an ever-broadening sonic palette that has explored far more than one might have initially expected from a group whose initial forays suggested little more than bandwagon-jumping chancers. In music, much like in life, you have to grasp opportunities as they arise and in demonstrating their longevity and expanding their creative horizons The Horrors have done just that and fully merit an opportunity to dine at Liverpool Psych Fest’s top table.

Liverpool’s International Festival of Psychedelia has always eschewed narrow parochialism in favour of a truly global outlook. It really is International more than just in name alone. 2016’s incarnation will see the festival look eastwards as Tokyo based label GuruGuru Brain  will present Narrow Road to the Deep Mind, a curation of the best modern psychedelic acts from the Asian underground scene.

On the bill will be Kikagaku Moyo and Minami Deutsch from Tokyo, NAWKSH from Taipei and Prairie WWWW from Karachi. It promises to be an irresistible voyage to new and exotic sounds.

Proving that psychedelia celebrates sonic diversity as much as it does the geographical, sinister and ambient electronic producers Demdike Stare play alongside the infectious bluesy-jangle of Liverpool’s The Stairs. Fans of the more kraut-influenced end of the psychedelic spectrum will be well served by Tim Gane’s Cavern of Anti-Matter while Dungen will add some prog-inspired Swedish psychedelic rock to the party.

In making a Liverpool return Silver Apples will provide a link to the beginnings of psychedelia, rolling off Chile’s endless psychedelic production line will be La Hell Gang while Acid Mothers Temple‘s fusion of heavy space rock and whacked-out blues will go down well in a city raised on a diet of Mugstar.

This year’s festival will also present one of the more potentially interesting acts around, Moonlandingz, which features an unlikely collaboration between Eccentronic Research Council and Fat White Family. Indeed Moonlandingz first emerged as the fictitious band fronted by Johnny Rocket in last year’s excellent Maxine Peake-narrated concept album by Eccentronic Research Council. Billed as a “cosmic synth kraut-a-billy group“, it will be fascinating to see how this translates into the real world.

With many more acts already announced, this year’s festival looks set to raise the bar higher still, bringing new and exciting sounds alongside some established favourites. From squalling fuzz to walls of feedback, 60s jangle, to motorik rhythms, and hazy ambience to gnarled electronica Liverpool Psych Fest‘s success has been built on presenting a diverse array of sounds under the collective banner of psychedelia.

Based on this line-up announcement we can excitedly expect the festival to go from strength to strength. Here’s to the next five years. 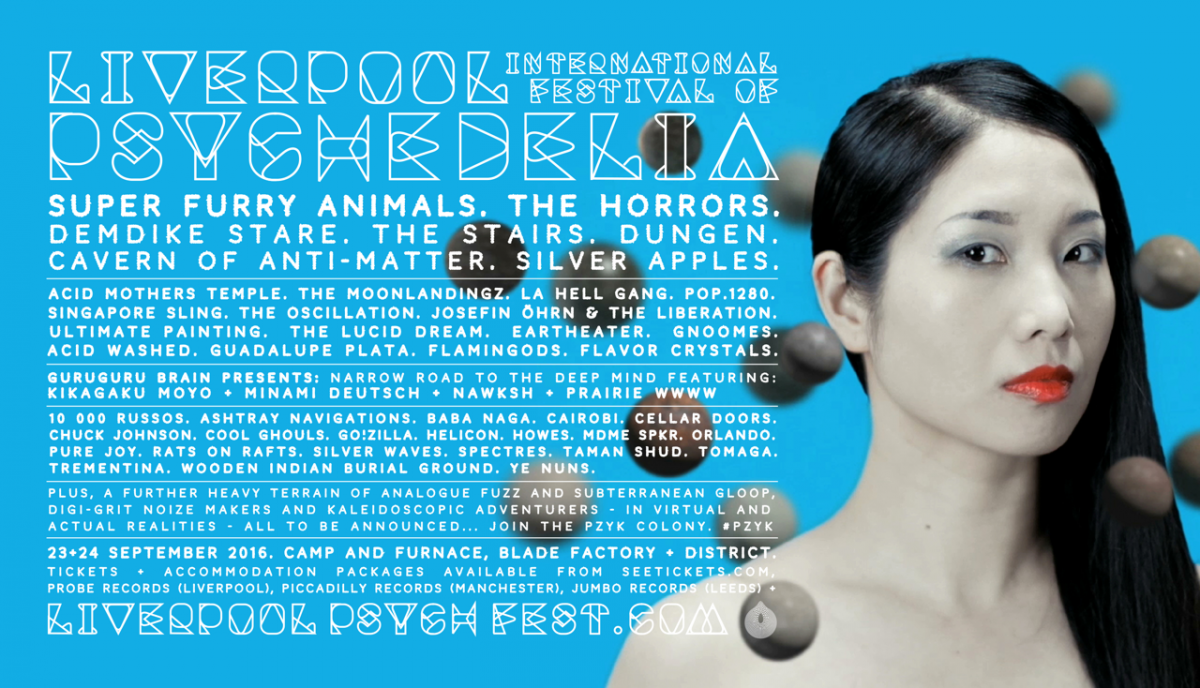 Liverpool International Festival of Psychedelia will take place at Camp and Furnace, Blade Factory and District on September 23-24 2016. Tickets and accommodation packages are available here.