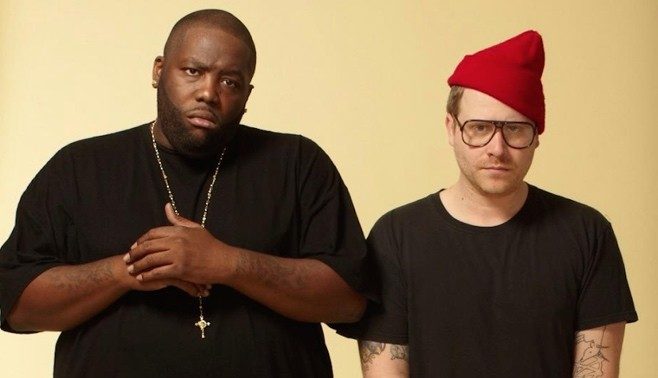 Yet again impressed by arguably the best psych act around, Getintothis’ Matthew Wood hops on a carousel with a Scouse trio, and makes a Faustian pact with some dangerously dark doom rockers.

A monster of a track for you here from the ever-deadly hip hop supergroup, Run The Jewels; our first flavour of the duo’s upcoming third album, Run The Jewels 3.

Moving closer with a immediate sense of urgency, Talk To Me lets any anticipation rise to the brim before bubbling over at the first strike of those scorching, delayed chords and a slick tom fill before Killer Mike begins to sow his lyrical seeds.

Launching into a spine tingling beat of a magnitude that seems as though it grows larger by the second, the track pulls no punches and teases you with a brief spoken interlude before returning with another wave, blowing out of the water any third album doubts.

Turn this one up and let it’s rattle your innards.

The Vryll Society – A Perfect Rhythm

Another spectacular effort from our very own psych pioneers; A Perfect Rhythm is a cascade of complex, interweaving melodies that crash and spill tremendously within the confines of a punchy 3 minute cracker.

Opening with a powerful surge of a warped drum beat, it isn’t long before we’re soothed by the ambient twinkles of the lead guitar and the ever distinct call of vocalist, Michael Ellis, breezes itself into the melee.

When in full flow, The Vryll Society offer an unparalleled brand of psychedelia that demonstrates the synergistic effect of an interlocking five-piece. In my opinion they’ve yet to release a track that has disappointed, and with an album set to arrive any time soon, it’ll sure to be a record to remember.

Trudy and the Romance – My Baby’s Gone Away

Liverpool trio, Trudy and the Romance, never cease to amaze with their eclectic sound and their ability to push boundaries in a manner that appears so effortless. Their latest, for instance, sounds somewhat like a battered Pete Doherty smoking fags on a carousel waiting for a long, lost lover to give him a hand getting off without falling on his face.

Capturing the topsy-turviness of the fun fair with a waltzing, vintage organ, frantic drum fills and a neat interplay of characters via frontman and backing vocals, urging him to sing like a scene from a musical.  You can catch them at Arts Club on October 28.

Taken from his upcoming EP, To Being Free, Mat Hunsley’s finely crafted folk is, at times, cold and desolate as his solo acoustic guitar breaks the silence, yet his vocal has a quality that is as warming as a deep gulp of hot, spiced wine on a winter’s evening.

Hunsley takes you hand in hand on a snowy stroll telling tales of love and loss, while flickers of electric guitar join you and subtly guide the way like a slowly dying lantern. Perfect for the coming months when your icy climb needs a gentle warming.

The full EP is out November 18.

A new favourite of mine, sex icon Connan Mockasin joins LA PRIEST for some super smooth funk that’ll have your clothes boogying their way from your body in no time.

In typical Mockasin style, his presence is as sensual as a pair of silk pyjamas, while as freaky as Michael Jackson on acid; once again he harbours the ability to make you wanna groove and burst out laughing simultaneously.

Perfect for your Friday evening jive when your pay cheque just hit your account and there’s an ice cold beer waiting for you in the fridge.

A neat combination of post-punk guitar riffs and spoken word vocals, James Leonard Hewitson is Hartlepool’s answer to the likes of Parquet Courts; slightly glum, slacker riffs, witty social commentary and a layer of noise and fuzz for good measure.

The Screen makes reference to the undeniable fact that society is permanently glued to one screen or another and the repetitive simple riff mirrors the monotonous nature of day to day life, scrolling drearily through wave after wave of meaningless shit that our Facebook feed throws up.

Naming your band after a venomous snake and a synthetic brand of weed that is arguably equally venomous and really mashes your brain, then you’re going to have to pack some kind of punch to do it justice.

For you Sheffield dwellers, they’ll be bringing their venomous racket to The Shakespeare on November 4.

A fierce, cathartic endeavour from Rocket Records for you here; Pigs (x7) explore their raw, organic emotion and transform it into something brutal, something destructive, but something truly real.

Sweet Relief is a gurgling blast of sludgy rock that has taken a hit from the same bong as stoner doom legends Sleep, while worshipping Ozzy Osbourne and co. along with a possible Faustian pact just in case.

Post Pines are an electronic duo from Sweden who will polish your very soul with their spiritual yearnings and their delicate, ambient glow.

Moon is a beautiful construction, minimal in it’s delivery as a crisp vocal washes over glimmers of synth that shrink and throb like gasps of the wind. A more rhythmic current of synth creates an intensity to the track as darker sounds join the mix.

Vocals fade into the darkness as the track draws to a pensive close, leaving you wondering whether the track brought you a sense of cleansing, or whether it left you staring into an endless void on your imaginary journey to the moon.

Siphoning ounces of that baggy swagger from the spectacular Urban Hymns, and pumping their own brand of mellow psych into the mix, The Sailmakers give us another taste of what they’re made of, and they’re proving a force to be reckoned with.

There’s a calm yet persistent energy running through Mountain Song, the band have a direction, but they’re in no hurry, slowing it down to an easy stroll but harnessing an excellent groove.

It’s a cracking blending of 60’s psych throwback, The Babe Rainbow, a steady dose of Brit-Pop and a stir of the more serious, sense-boggling work of Toy.