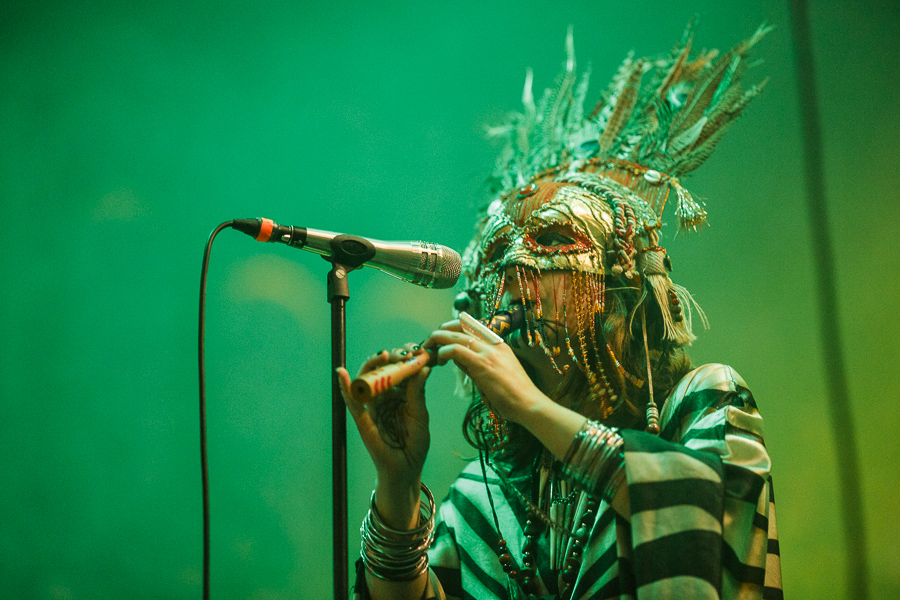 Goat headlined an all-dayer at Manchester’s Albert Hall, Getintothis’ Michael Hovercraft and friends took a trip to the next dimension.

It began before that night in late October. In fact it had probably been going down for more than a decade now.

The psychosis they’d been feeling was just an extension of what seemed like forever but Big Rob’s tales about sitting up in his spare room road-testing his new Electrohome Signature Vinyl record player by repeatedly playing Neil Young‘s On The Beach from 2am until 7.45am while hoovering up half of the North End’s class As perfectly suited the day’s pre-amble to Manchester. Big Rob was on fine form and his stories about hallucinating deep into Saturday morning while fantasising about quitting the 9-5 office game and becoming a heavy-weight boxing champion may have sounded fantastical in the extreme yet they were also characteristic about what lay ahead and where they were all at. Who knows, such was his substance resistance he probably could take down half the heavyweight division. And still have something left for later.

But here they were. Mid-30-year-old’s drinking Belgian lager on a slow train to Manchester that stunk of a geography supply teacher’s cardigan ready for a full-on evening of carnage and mind corruption. Having arrived at the station first, Whitey had done them all a solid picking up tickets, grabbing a six pack plus a pick-n-mix of bottled ale as Frank nonchantly prepared another spliff much to the chagrin of a jobsworth Tory in the adjacent seat. Frank couldn’t give a shite. He’d been smoking weed since he was 11 and he wasn’t going to stop for some jumped-up Tory on a day-trip from Southport. Anyway, it settled his nerves, he didn’t know any of the cunts he was travelling with except Big Rob who told him to come along when he bought tickets back in the summer guaranteeing a good laugh and some top tunes. ‘Goat – whoever calls their band that must be taking the piss,’ he thought to himself while poking the roach in with the end of his market stall lighter, all the while watching Spidder in the seat opposite devour a duck wrap he’d stolen in the M&S shop at Lime Street. He had hoisin sauce spattered on his chin and it was slowly solidifying into a greasy splodge resembling an oversized mole. Moving on to the continental lager, Spidder walloped a chocolate flapjack and some mini raw carrots – ‘It’s like a scene from a middle-class Enid Blyton book’, thought Frank…

The Enchanted Wood, or maybe Roald Dahl‘s Dirty Beasts would be an appropriate context for tonight’s proceedings as they alighted at Deansgate and a mix-up with Whitey’s ticketing arrangements saw Frank having to illicit some fancy footwork while evading a collector’s eye as the group realised they were one train ticket short. Summed it up. All par for the course on this kinda away day. Onwards to the Albert Hall. Despite the darkness, and having said he’d never been the place before, Frank was like some marijuana-fueled missile insisting he knew the way; his stoned swagger acting like a radar as he weaved in and out of late evening shoppers, narrowly missing an oncoming tram as they turned on to Peter Street. A brief stop saw the group chat to some like-minded heads Deborah and Mad Ian. ‘We’re going there later, just gotta meet some mates for a bevy‘, Deb said. Ian wasn’t really mad but had been given the nickname from his teenage years when he used to walk his pet stout round the field in St Helens. Not many people had stouts and Ian was quite shy so people thought he was a lunatic. In some respects he was. The stout was dead now, but the nickname was his for life. He wasn’t arsed.

It was still early evening as they trickled into the Albert Hall, around 17 people were there cradling their five pound a pint house lager as Josefin Öhrn‘s final strains of From Madrid / Rainbow Lollipop reached a crescendo; an epic she’d obliterated on to an unsuspecting crowd earlier in the year in Liverpool at the International Festival of Psychedelia, and to the four lads who’d made the trip from Merseyside it was hard to escape the fact that the night felt like the closing chapter on 2016’s never-ending cosmic marathon – and they weren’t altogether sure who was getting out alive. Having hovered around the mixer, Spidder decided to find a position for the evening.

The Albert Hall is a magnificent Grade II baroque-gothic structure that would lend itself to the odd hunchback swinging around it’s horse-shoe shaped balcony – and given the chance, and enough stimulants we’re pretty sure it has had in recent times. A veteran at this magnificent venue, surely one of the UK’s finest, Spidder positioned himself back right allowing the final rays of light to burst in from the tall adjacent windows, just as Liverpool titans Mugstar booted off the second set of the evening. Mugstar are the aural equivalent to being trapped inside a Mini Cooper at the heart of a particularly nasty typhoon – they hurl your senses all over the shop while rattling your insides – and coupled with unofficial fifth member Sam Wiehl‘s visuals the effect is akin to the climax of Star Wars when the X Wings are being chased down that narrow channel in the Death Star all the while being shot at by the TIE fighters; a dizzying array of lazers layered with claustrophobic aural tension. Tonight Mugstar are without their focal point Peter Smyth and there’s a slight keys-guitar dynamic lost but it is what it usually is – a monster of swirling riffs colliding with a full-on percussive assault.

The quartet set up shop, and soon their own corner of that Albert Hall resembles a mini tuck shop of substances and ale as the next artist Jane Weaver provides some levity into proceedings playing tracks from her superlative Silver Globe album. The neo-Oriental chimes and cheeping refrains of Don’t Take My Soul proves a set high only to be eclipsed by one of the finest tracks of the last few years, the towering eight minute epic Argent which is given added resonance by some searing guitar work. 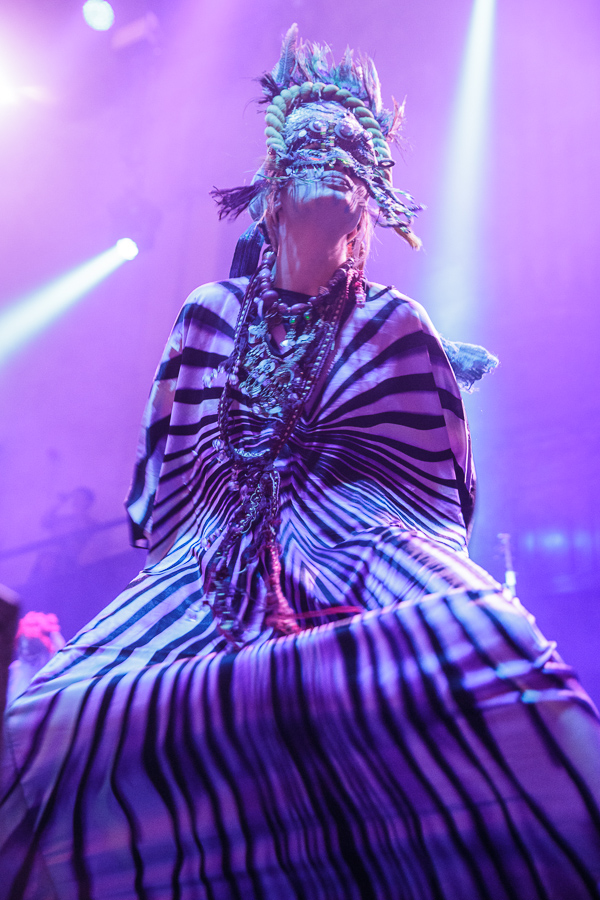 It’s around 8pm and four become five when Jim turns up out of nowhere. He’d been out the night before with Big Rob and Whitey, but unlike the former who’d continued to party til he passed out and the latter who’d sensibly took stock of today’s misadventures, Jim had leathered the ale and spent half the day in his duvet, the other half with his head down the toilet. He still didn’t look right when Whitey forced a pint into his hand. Frank chuckled to himself as he skinned up for the fourth time.

Hookworms hadn’t played the North West in what seemed like aeons; and their return was greeted like some kind of homecoming – and boy, did they deliver – this was the start of the night descending into all out ferocity; a searing, white-hot rollercoaster with no intention of breaking. The Leeds five-piece mix things up from their two albums in what seems even heavier than usual with pulsating keyboards thrust to the fore all the while retaining their nous for solid gold melodies. The weight of their sonic breeze-blocks almost intent to force itself through the chests of the audience. Spidder had to have a sit down. Whitey declaring it the best he’s seen them. Over in the far corner of the room, Finders Keepers head honcho Andy Votel is living up to his musicologist reputation by DJ-ing the latest in contemporary Namibian outrock – complete with flute solos. No one in the venue has heard such music before yet everyone is loving it.

And then came the main course. By now, Spidder and Big Rob were on a collision course with Fear Tuesday, Whitey had gone AWOL, his last text message read ‘By bar…‘ So were several hundred. Frank looked suitably fuzzy, his grin was now stretched like an elastic band almost past his ears and touching round the other side of his head. Jim was still forcing down his second, now tepid, pint of ale.

Goat are a funny bunch. In isolation they look like a Gay Pride version of Games Workshop fanatics. Or a contemporary Rentaghost. But when the opening juggernaut thud of Words from second album Commune ripples around the Albert Hall; all squalling John McLaughlin serrated guitars it’s like the musical equivalent of the All Blacks laying down a Haka. It’s positively terrifying. Several early bites from their 2016 album – notably the eastern-imbued Try My Robe and the 60s piccolo-infused Union of Sun and Moon takes things down a notch before the Afro-Caribbean jive of Trouble on the Streets turns the Hall into a thriving mess of boogieing bodies. Better yet is the run in, a frenetic chase of rattling bones, wood on leathery drum skins, thick-broth-like bass-lines, cowbells fighting for attention and those dual near indecipherable chanting female banshee wails as Run To Your Mama and a main-set closing Talk To God – complete with outrageous guitar clamor reaches the point of ecstasy. A brief breather and then the one-two body blows of the Funkadelic-aping Goatman and the brassy stew of Let It Bleed segue into a 20 minute ritualistic spacerock jam Det Som Aldrig Förändras – complete with that distinctive Arabic wrecking ball finale. It’s quite literally interstellar. A final frontier. Another dimension…

‘Where’d you end up,’ Spidder texted the next morning. ‘A techno dungeon, I’m still out‘, Big Rob replied. ‘Kinel – where?‘ Spidder asked… Two days later came the response, ‘Mate, it was all in my head, great that though, right?‘ 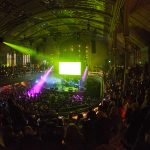 The Albert Hall in Manchester 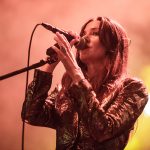 Josefin Ohrn + The Liberation at The Albert Hall, Manchester 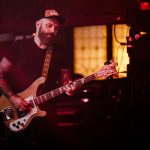 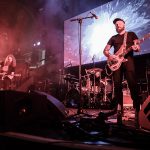 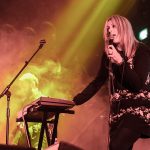 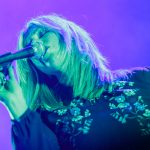 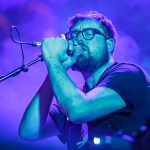 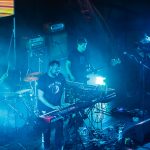 Hookworms at The Albert Hall, Manchester 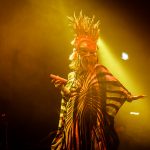 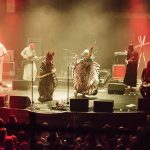 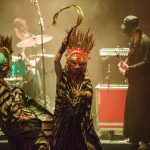 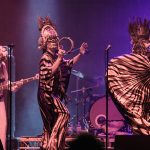