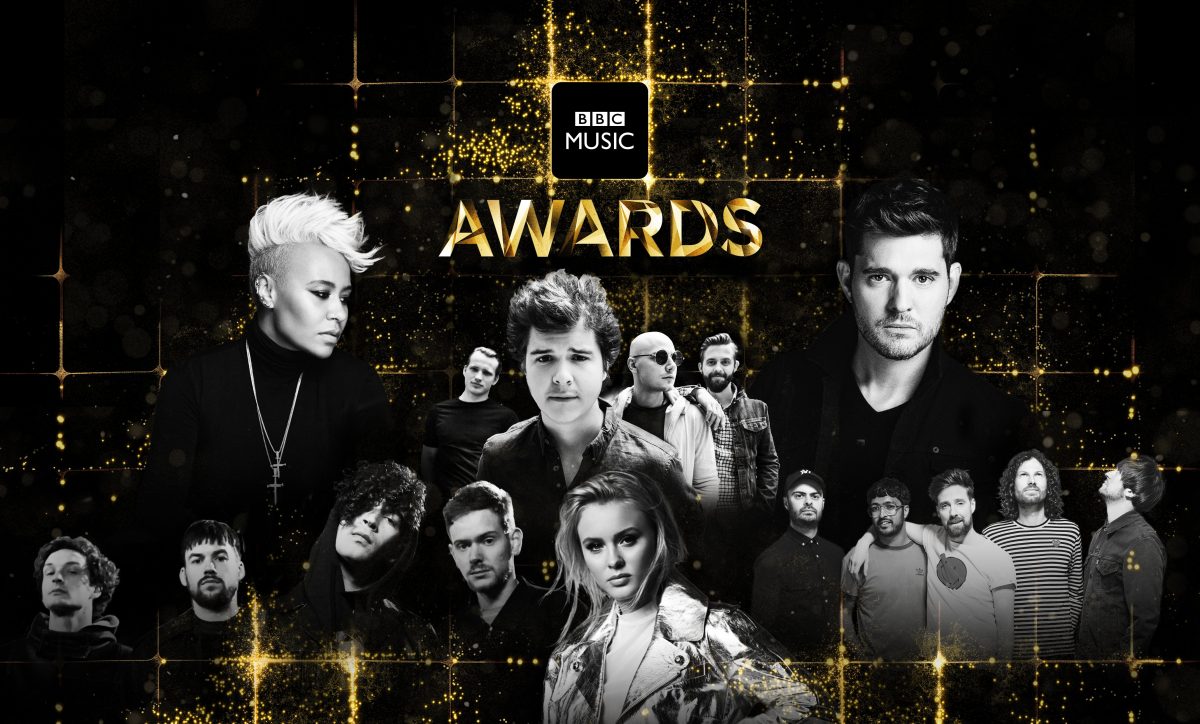 The BBC Music Awards returns for its third depressing year, and as ever Getintothis’ Shaun Ponsonby watched it so you don’t have to.

So…erm…I made a massive blunder.

You see, last week I did the Christmas number one predictometer, which I had planned to precede the Cosmic Slop round-up of the year. But, being the international joke of a man that I am, I miscalculated the number of columns I had left to write this year, thinking that this week would be the final Slop of the year.

Obviously, that isn’t the case.

Luckily, the BBC Music Awards happened this week, so I was able to find something to write about quite easily.

By now, you no doubt know exactly how horrible the whole event was. If you didn’t see it, you don’t fully understand. I have nobody in my life, so I have the time watch these things and let me tell you in no uncertain terms; this shit is worse than the BRITS. Imagine swallowing a piss stained nettle whilst being forced at gun point to whack off your crazy Uncle Jeff to climax. That is the benchmark we’re talking about.

The hosts were Fearne Cotton, Claudia Winkleman and Gemma Cairney, which I guess made this this the opposite of a Sausage Fest, whatever that might be. I’m going for Flower Show. Obviously this isn’t a problem, but the fact that the three hosts had about as much chemistry as the cast of Grease 2 did. 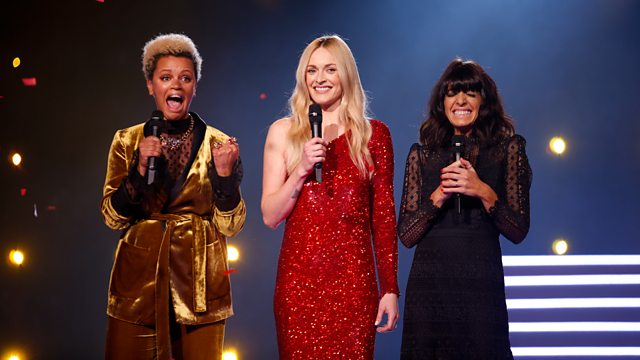 Winkleman was as overexcited as ever, referring to the show as “An early Christmas present”. Not a good one, obviously, more like a boring but vaguely convenient Lynx Africa set. You won’t get excited about it, but you’ll thank your Nan for the thought. After all, she doesn’t really know anything about you outside of the fact that you’re a boy.

Fearne Cotton is someone I always wonder about. Like, how does she have a media career, exactly? Then I remember that she is related to former BBC Executive Sir William Cotton. Aside from the fact that she seemed constantly surprised that she was on TV, she is one of those irritating people who feel compelled to force too much enthusiasm for the blandest of bullshit via an assortment of buzz words; “Wow, guys, look at that tree! Wicked!” Fuck off. If you are that impressed with everything, then you must be hiding some dark secret. I’m not saying Fearne Cotton is responsible for a number of unsolved murders, I’m just saying it’s possible.

Whereas at most award shows, the main host just introduces the award presenters and lets them get on with it, for some reason Winkleman and Cotton had been instructed to interview everyone who came on, leading to classic anecdotes such as the time Claudia Winkleman and Rick Astley did a conga in Blackpool. The only person in the country who found this interesting was Peter Kay, as that scene is clearly his ultimate wet dream.

There was also a moment after Craig David (currently on the least likely comeback since Tony Christie) performed, when Cotton asked him if he was cooking Christmas dinner. You know, the question on the nation’s lips.

Cairney was responsible for backstage interviews, disguised as small talk between two people who work in the same building and see each other in the lift every morning. All this celebrity bumming is so boring. I’ll give points to Robbie Williams though, he was at least trying to be entertaining, even if putting a handful of miniature chocolates in your mouth with the wrappers intact is very, very silly.

He was also way too present; backstage interviews, appearances in VT’s, performing, accepting an award on behalf of Adele. It started to feel a little Orwellian. On this evidence, I wouldn’t be surprised if 2017 was the year he made his bid to take over the world a la Pinky and the Brian. Maybe then Barlow could finally get his knighthood.

The event started off proper with The 1975, who were excitedly announced as having “the longest album title of the year”, which is a pretty bizarre honour to bestow upon somebody during their introduction. It’s like introducing Arnold Schwarzenegger as “The man with the 20-letter name”.

If you think this is moaning, you ain’t seen nothing yet – the entire history of Cosmic Slop

They performed The Sound, which is actually a decent pop song, but Matt Healy is just too pretentious to fully enjoy. He basically just stumbled around the stage, mumbling incoherently into the mike during the performance. He made a big deal about making the audience jump and down, and the camera panned around the auditorium so we could all witness this magical moment. And I’m sure both of the people who did as he said enjoyed briefly being on TV.

The 1975 also won an award for Best Live Lounge Performance, and it occurred to me that there are other members of the band. Do they even have mouths? I have literally never heard any of them speak. You could replace them with mops and nobody would notice.

What the other performances revealed is that we are living in turgid times. Everyone sounds like they can’t be arsed when they are singing, even if they can actually sing. Emeli Sande, John Legend, Coldplay (who won Artist of the Year over David Bowie, despite being the worst British band since UB40), everyone just sounds fucking bored of themselves.

when BBC chooses Coldplay over Bowie for artist of the year https://t.co/ayg7p3K6HM

Of course, Denmark’s Lukas Graham – a band named after their frontman, Lukas Graham, taking Matt Healy’s pushing of the rest of the band into the background to a whole new, boundary-pushing  level – performed their big hit 7 Years; a terrible, pretentious ego stroke that is a pretty good song to have diarrhoea to. Anyone who claims to like it is either brainwashed or a liar. Later on, Zara Larsson did that “starting backstage and walking to the front whilst singing” trick. It shows up on at least half of the award shows every year, and every time they act like it’s the first time anyone has ever done it.

There were a couple of bright spots. I figured BBC Introducing winner Izzy Bizu (what’s with all of these half-rhyming names?) would just disappoint me. With a name like that, you would expect her to be glam, but she wasn’t quite glam enough. I mean, she had some glitter, but I demand jet boots or some shit. She was pretty cool, to be fair. White Tiger had me tapping my foot in the living room, and she had a bit of girl group schtick with her backing singers, which I fully approve. It wasn’t enough to save the show, but it was a step up.

The worst parts of the show were the weird VT’s. At the beginning, Danny Dyer voiced a video that seemed to say “It’s OK that we lost Bowie, Prince, Lemmy and Leonard Cohen, because at least we still have Adele and fucking Coldplay”, before leading into a full on propaganda piece regarding the BBC’s music coverage.

But even that couldn’t match Ricky Wilson. As if wondering why the Kaiser Chiefs are still a thing wasn’t troubling enough, he did this weird sketch where he went undercover backstage in an overdue tribute to Jeremy Beadle. He actually ended up looking a little bit like Tom Petty. It just went on and on and on. You could almost feel the nation scratching their heads. “Why is this happening?” we asked. “Is this punishment for Brexit?” It was so pointless that it was almost Dada. Winklemen commented that Wilson was a “modern day master of disguise” – and if they’re referring to the notoriously awful flop Dana Carvey movie, I agree.

There were only five awards, and I’m guessing you don’t care what they were or who won them. Geri Horner, formerly Halliwell, formerly Ginger Spice came out to present Song of the Year, which undeservedly went to Adele. Ginger walked on stage to Justin Bieber’s Sorry, which almost felt like an apology to the viewers for her presence, as I suddenly remembered what a massive fucking phony she is.

As Adele wasn’t present, Cotton read out a statement from her that looked a little bit like she was channelling Adele in a séance. Geri couldn’t help stealing the moment, and started on an desperate, interminably lengthy monologue about how she would accept the award and that Adele should come round to her house for a cup of tea (no, really, she actually used those words).

Then it was left to Robbie Williams to crop up yet again to finish the show in a typically ridiculous performance. But, in fairness to him, a dose of silly pizzazz compared to the other performances made it feel like genius. The song he sang had the hilarious line “I’m hung like a dolphin”, there were old fashioned showgirls, he was posturing around the stage like pop stars daren’t anymore. Frankly, it was a much more entertaining ending than the show deserved.

But I still came away feeling naked, cold, alone. And not just because I was literally naked, cold and alone. What the hell is this show supposed to be?

It says it’s an awards show, but it doesn’t feel like an awards show. Adele cares so little about this shitshow that she didn’t even bother to record an in absentia message. Then there are the weird sketches that nobody wants to watch, and the interviews on stage which make the whole thing feel like a variety show.

There is no reason for this show to exist. All it is doing is providing yet another platform for the likes of Adele and Coldplay, whilst allowing Robbie Williams to continue into his Orwellian future. It’s worse than the BRITS, it is worse than the VMA’s. At least they know what they are. I’m not even talking about who they give the awards to – I couldn’t give less of a shit about that. The whole thing is a confused mess, and everyone involved is making a fool out of themselves for doing it.