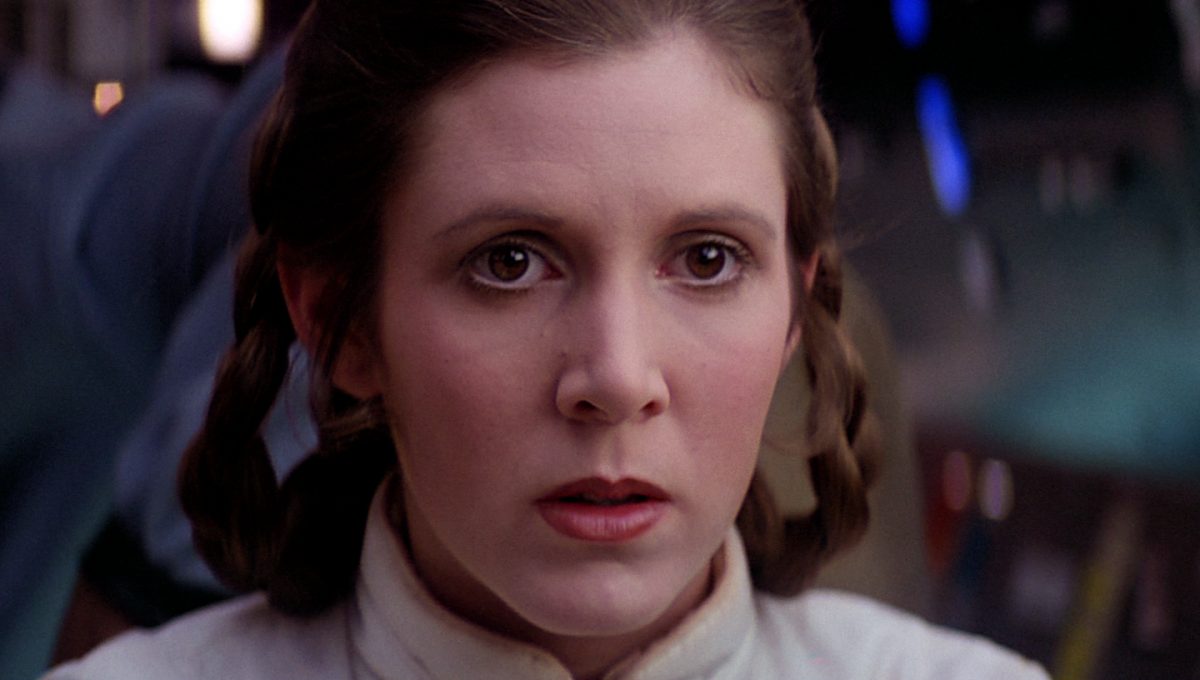 Carrie Fisher in her most famous role – Princess Leia

Following the tragic news of the death of actress Carrie Fisher, Getintothis’ Del Pike looks back on her varied and incredible career.

When the news broke before Christmas of Carrie Fisher’s dramatic heart attack, we all held out hope that she would recover, but in this tragic year perhaps a return to health was too much to ask.

Fisher who died today will always be remembered for her role as Princess Leia, the feisty heroine of the original Star Wars trilogy, who recently reprised her role in 2015’s The Force Awakens, but she had so much more to offer than just a Star Wars actress.

Appearing as Leia in 1977 at just 20 years old, her twin-Danish bun hairdo and no-bull stance made her an instant icon for girls across the world and resulted in a female action figure it was ok for boys to own. Her whiter than white appearance in the movie appealed to kids but being born into a Hollywood Babylon lifestyle with movie stars Eddie Fisher and Debbie Reynolds for parents, her private life became a fascination for older fans, and it was no secret that she was having an affair with the then married Harrison Ford throughout the filming of Star Wars. Fisher would later marry the singer Paul Simon, but the marriage was short lived lasting just one year.

A rebel on screen and a rebel in real life, Fisher rarely chose the easy route. Very much in the public eye due to the major success of the Star Wars movies, the pressure was often a lot to bear and she found herself gaining attention for the wrong reasons. Periods of drug addiction were discussed openly in her semi-autobiographical novel, Postcards from the edge in 1987 and she later helped to adapt the book into a successful film, directed by Mike Nichols in 1990.

In 1980, Leia returned to the big screen in arguably one of the greatest movies ever made, the next Star Wars chapter, The Empire Strikes Back. In a case of art imitating life, the romance between Han Solo and Leia grew stronger, and she swapped her royal gowns for more practical kick-ass action outfits. Alongside Sigourney Weaver who had just kicked similar ass in Alien, this was a time for a new kind of heroine and Fisher became the poster girl of the 80s for girls and boys alike.

Her turn as the psychotic ex-girlfriend (Mystery Woman) of John Belushi’s Jake Blues in John Landis’s cult action musical The Blues Brothers that same year, showed a darker yet more humorous side to Fisher’s acting skills. Yielding a bazooka, she appealed to a much more complex taste and was fast becoming a sex symbol for a new generation.

This appeal was shamelessly exploited in the third Star Wars epic, Return of the Jedi in 1983 which found her sporting the equally iconic metal bikini as a prisoner of Jabba the Hutt. Reprising the role for Rolling Stone Magazine that summer in a revealing photo-shoot, the newly sexualised Leia was a major step away from the innocent princess from the summer of ’77.

See our review of 2016’s year in film right here

Fisher’s post Star Wars years would not leave her free of the role with seemingly endless public appearances and that fateful curse of appearing in any cult movie, a lifetime of being stalked by fans. Her roles however continued and Fisher carved out a niche in 1980s comedies including The Man with one Red Shoe, When Harry met Sally… and The ‘Burbs.

It would be easy to focus on the hard times of Carrie Fisher’s life, but a resume of her post Star Wars career reveals a talented and hard-working professional and there is so much in her life to celebrate.

Outside of acting Fisher was a successful novelist and an award-winning script polisher. Working alongside George Lucas on his Young Indiana Jones Chronicles series, Fisher also worked on many scripts including Hook, Sister Act, The Wedding Singer and most notably the three Star Wars prequels.

Fans may have been surprised to find her in the strange environs of a British sitcom as Rob Delaney’s cranky mother in Channel 4’s Catastrophe and roles such as the voice of Peter Griffin’s boss in Family Guy and Star Wars related appearances in Jay and Silent Bob Strike back, Scream 3, 30 Rock and Fanboys assured fans that her sense of humour was still well and truly intact.

Work such as her successful 2006 one woman play and subsequent autobiography, both titled Wishful Drinking made sure she was a force to be reckoned with. Tackling serious issues head on in an accessible and valuable format appeared to be yet another talent from this incredible woman.

Fisher’s own struggles with depression and a bipolar disorder have been highlighted in recent years and she has been rightfully recognised as a leading figure in raising awareness of the issues. Fisher blamed these illnesses on her dependency for vice, and it is refreshing to see already on social networking sites that she is being remembered by many for this work in addition to her work in show business.

It seems cruel that Fisher should leave us now tragically at 60, and because for her fans she was once again becoming more and more visible in the world of Star Wars. The reprise of Princess Leia in The Force Awakens, alongside Harrison Ford and Mark Hamill, was one of the major attractions, for true fans particularly, and the spirit of the original movie and the Leia character looms large in the recent Star Wars spin off, Rogue One. The latter is a perfect tribute to Fisher and her Leia character and for that matter to Kenny Baker (R2-D2) who also passed away this year.

Carrie Fisher will remain alive as Princess Leia but will be sadly missed as a true rebel, one of the great Hollywood stars who lived life on the edge but always delivered. A hero on screen and off and so much more than just another figure in the bizarre celebrity cull of 2016.