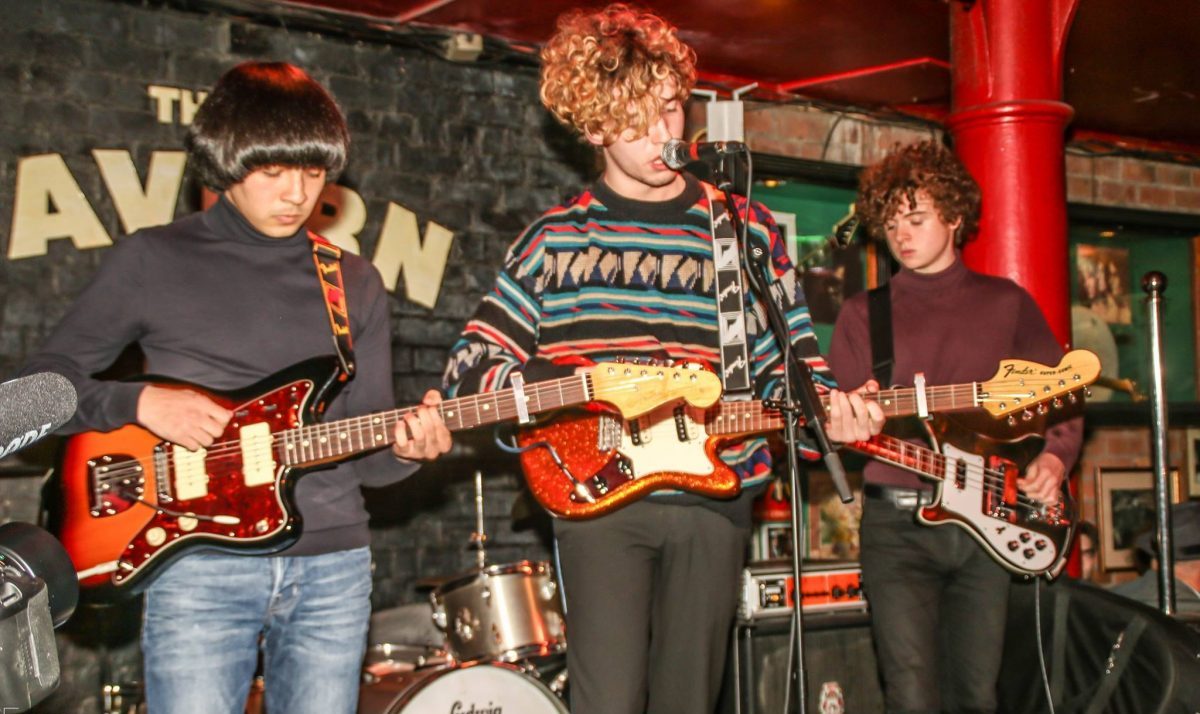 You have never seen a crowd of teenagers moshing to a Wham! classic, Getintothis’ Lily Corke Butters has got something on you.

The evening opened with an energetic set from youngest band of the night, Eastcote. Armed with a vibrant and expansive setlist ranging from Green Day to The Who, the band’s enthusiasm overshadowed their lack of experience. Despite a string breaking on their guitar, the band kept the audience engaged – even as guitarist, Josh Nimmo, sat on the edge of the stage attending to his instrument.

The voice of singer Jodie Young flooded through the bending notes and heavy beats of the songs, perfectly accompanying and completing their sound. It is hard to categorise Eastcote’s style into one genre, but they don’t stray too far from grunge. Their popularity can only be expected to rise as they play more gigs and perform more songs.

Next up were three piece SPILT. Their songs conjured up a Wytches-like infusion of grunge and psychedelia. Rage-induced moshing in the small crowd created total immersion in the music. It became apparent that the band carried a set of diehard fans who gathered at the front of the crowd and knew exactly when to jump into a frenzy when the songs dropped.

After singer Morgan Molyneux shamelessly announced their Runcorn origins, and how they “copy everything you Scousers do”, the crowd seemed even more enthused with the band’s energy. Their music can be found on Soundcloud, but with less than 800 followers on Facebook it is clear the band need to up their social media game to gain the maximum benefits that it poses.

The Kulaks lured the crowd into a false sense of security with Tame Impala-like riffs and a sound reminiscent of early Arctic Monkeys. However, across the set, their sound seemed to evolve from like that of peppy indie pop, to heavier, almost psych rock. Liam Doyle‘s vocals echoed that of Circa Waves’ Kieran Shudall. Yet during the band’s exceptional cover of The Modern Age, Doyle’s voice perfectly mirrored that of Julian Casablancas.

Hear Spinn and other artists in our Deep Cuts column

The pivotal moment of the set had to be during one of their final songs, as Ben Harper (guitar and vocals) unrelentingly screamed into his guitar to create an infusion of reverberating chords and ringing shrieks. Over the course of their half an hour set, the band’s eclectic mix of songs mixed to create a fresh and almost seamless performance.

The infamous Bohos held up the fort as the fourth band of the night. Finally encouraging the crowd to edge forward to the front of the stage, it was clear the band had already had extensive experience of performing. Their songs offered a sense of urgency, as Fin Power’s aching vocals poured across the music.

Paranoia Dreams was clearly well-known and well-received by the crowd, with the majority singing along with the chorus. After a short break from SPILT, they succeded in getting the crowd moshing once more – seemingly the preferred method of movement by many.

Finally, after the long build up, Spinn arrived, their light sound floating through the small venue and engaging everyone in earshot. The lyrics and vocals conveyed a sense of longing or pining, and Andy Power’s guitar echoed that of Johnny Marr during his days in The Smiths.

The upbeat Green Eyes awoke the crowd from their apparent indie daze. Before the end of the set it appeared that the band had somehow fallen short of songs or maybe wanted to further please the crowd, so turned to the audience for suggestions.

After someone jokingly shouted out “Last Christmas!!” the band charmingly took on the challenge and converted the Wham! classic into an Indie sensation. With the laid-back vocals and jangling guitar, the song could have been passed off as a Spinn original. One of the most surreal gig moments that we have witnessed was when the teenage crowd began to mosh to the George Michael classic. The cover undoubtedly finished their set in the best way possible, leaving fans slightly confused, but nonetheless wholly satisfied.