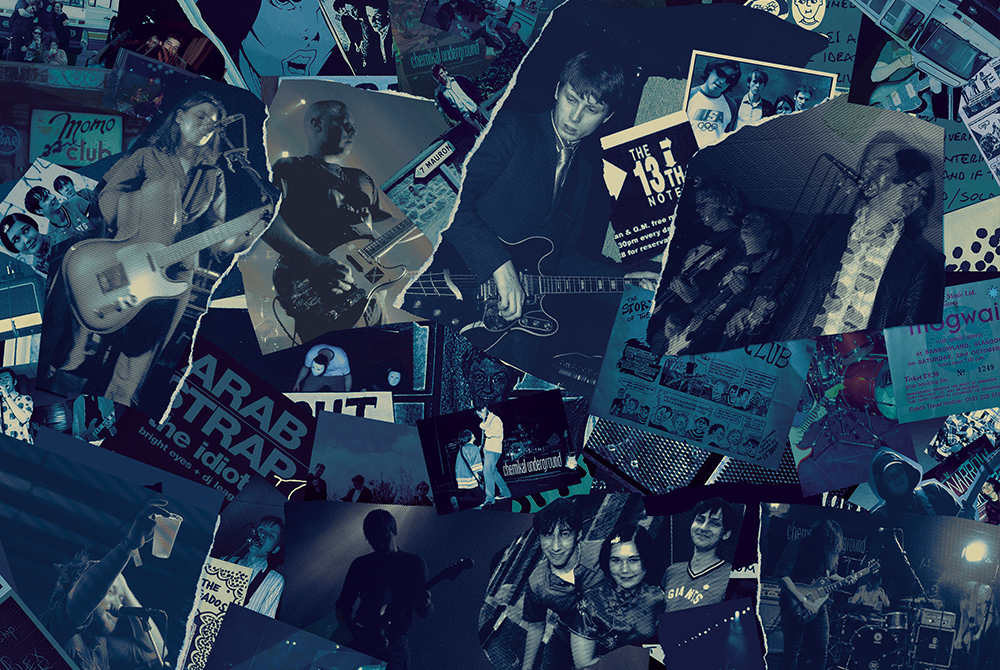 As the Chemikal Underground film screened at FACT, Getintothis’ Paul Higham drew comfort from the twin embrace of friendship and music despite an uncertain future.

In telling the story of Chemikal Underground through the eyes of many of its principal protagonists, Niall McCann‘s Lost In France offers a poignant, sad-yet-uplifting and often funny portrayal of the enduring power of friendships forged in our youth.

As the title suggests the film is anchored in France, in the small provincial town of Mauron on which a coach load of dishevelled and debauched Glaswegian musicians descended for a music festival in 1997.

Combining rare archival and concert footage from the original trip with a return visit two years ago by Mogwai‘s Stuart Braithwaite, Stewart Henderson, Paul Savage and Emma Pollock of The Delgados, RM Hubbert and Franz Ferdinand‘s Alex Kapranos, the tales of rampant, youthful excess on land and sea contrasted neatly with the modern day respectability the now mature and responsible gang exuded.

So much fun at the @LostFranceFilm showing in Glasgow tonight. Great to see so many old pals and play with Alex, Paul, Emma and Hubby ⭐❤

The intimate 2015 performances were full of polite reserve and reassured contentedness; the delicate rendering of Braithwaite‘s Cody basked in the grace and ease that comes with age. The contrast with the wild-eyed exuberance of yore proving marked.

Yet this was something more than just the music. It was about life. About memories. About hopes and regrets. About the past and the future. And about the unbreakable bonds of friendship.

The most affecting scene was set in the small Mauron bar, where memories were shared and half-remembered stories pieced together with the aid of a box of old photographs. Photographs of photographs were taken and messaged back to those unable to make the return visit while misty-eyed reminiscences were told with genuine laugh-out-loud humour, including the tale of the always-drunk coach driver channelling Graeme Souness and injecting a dose of Glaswegian bite to a friendly end-of-trip football match.

While there was an unsurprising willingness to relive the past and share old stories, there was no sense of wallowing in it or dwelling excessively on nostalgia. The past being used to strengthen the bonds of the present, rather than to express any real desire to return to days of old. Photographs and footage greeted as much with a sense of embarrassment as pride.

There were tales of regret of course. Bis recount how their stardom and Top of the Pops appearance all came too soon and wished they had enjoyed the transitory moment more. There is a sense of frustration at the lack of professionalism in the label’s early days, a niggling sense that this might have hindered chances of success. Kapranos appearing slightly ill-at-ease with his subsequent finding of mainstream success that perhaps eluded some of his, at the time, more musically established colleagues.

What a wonderful film, well done everyone! So proud to be part of it & ready for the follow-up single to Kandy Pop on @ChemUnderground pic.twitter.com/XwAVoL6Vhd

The film successfully captures those early carefree days where life was simpler and the future felt too far off to worry about. The excited sense of community built around the Hubbert and Kapranos-run Kazoo Club night at The 13th Note. The euphoria of the early hits, the dangerous unpredictability and cross-generational shock of Arab Strap, the lack of plans and strategy beyond putting out a seven inch single. The live-for-the-moment-to-heck-with-the-future attitude lighting the fire that forged lasting friendships.

The film casts its net wider. Post-war Glasgow, blighted by industrial decline, economic hardship and urban decay, was held together by its sense of humour and love of music. Social welfare offered a lifeline, not as a recipe for idleness but as a vital fund for the creative arts.

The ambition of the Garden Festival, the importance of the Capital of Culture and the decline of Thatcherism offered a hopeful environment and provided opportunity and it was in this landscape that Chemikal Underground initially, if chaotically, flourished. Yet it is clear that times have changed, the outlook less than rosy.

When Liverpool did Paris – The Liverpool 1990 Festival: Lost in France

Stewart Henderson appears less than sanguine about the prospects for both his label and the wider industry as the balance tips away from buying records in favour of streaming services. His ailing dog barely subsisting on a diet supplemented by doses of Gaviscon offering ample metaphor to accompany Henderson’s frustration at bands as gifted as The Phantom Band being denied wider recognition due to a paucity of funds. Emma Pollock reveals a hand-to-mouth existence, only ever six months away from having to get a proper job away from making music.

What was it that was lost in France? The 1997 trip seemed to mark the end of one chapter and the beginning of a new. A coming-of-age last hurrah, one final fling before real life beckoned. The end of innocence and the moment things became serious, less fun and more business-like.

Yet the relationships have remained. Amid the unpractised ease in each other’s company, it is RM Hubbert who best captures the essence of the story. At his lowest ebb following the death of both his parents, relationship break-downs and having been diagnosed with chronic depression he turned to his oldest friends, friends he had not seen for many a year.

His recovery is testament to the power of friends and of music. And if Lost in France teaches us anything in this most uncertain of worlds it is that we should cherish both and hold them close.

Last night’s incredible #LostInFrance show – you can still catch the film at @glasgowfilmfest including a Q&A with the director today 15:30 pic.twitter.com/FS2ixTRXya

The special screening of the film was followed by a short one-off concert beamed live from Glasgow’s O2 ABC as the Maurons – Paul Savage, Alex Kapranos, Emma Pollock, RM Hubbert and Stuart Braithwaite – took us on a whistlestop tour of the Glasgow underground taking in The Jesus and Mary Chain‘s Some Candy Talking, The Pastel‘s Nothing To Be Done and Franz Ferdinand‘s Jacqueline before culminating in a rip-roaring lost classic of the scene, Owl in the Tree by Trout.

Watching a gig beamed live to a cinema screen is an odd experience, and one that no-doubt worked better for those lucky enough to be at the Glasgow screening. Yet here it oddly worked, a worthy celebration of the film and the smiles on the faces of the five on-stage performers said it all.

Yet this was merely a nice addition; the real star and the real reason for attending was the film itself.