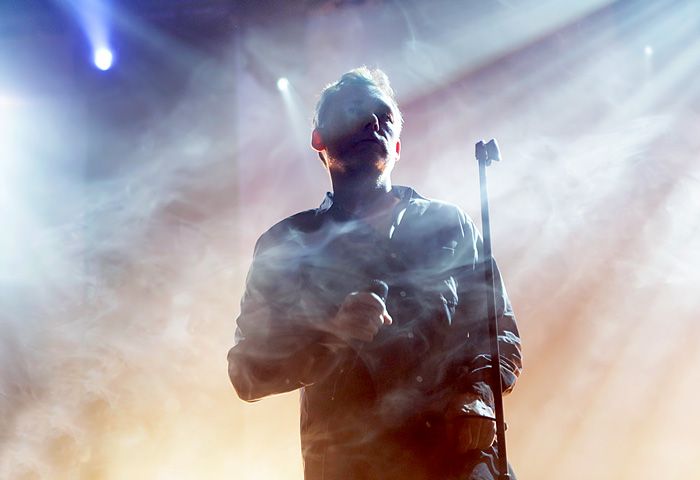 With anticipation at fever pitch for their upcoming Liverpool date, Getintothis’ Patrick Clarke speaks to The Jesus and Mary Chain’s Jim Reid on hedonism, legacy and rebellion.

When the colossally acclaimed War on Drugs announced that their November Liverpool date last year was to be rescheduled for this February 16, a situation arose. Just two weeks after the announcement news broke that the seminal, formative alt-rock leviathans that are The Jesus and Mary Chain would be taking their lauded recent tour to Liverpool that very same day, and thus were Merseyside’s musical savants split.

On face value it’s perhaps easy to find the divide. The War on Drugs, fresh from topping almost everyone’s end of year lists with the propulsive Lost in the Dream are essentially the contemporary band of the hour – the sound of 2014’s cutting edge. The Jesus and Mary Chain are a band in their fourth decade, and the close-minded among us might easily surmise that their gig was to be the refuge of the relics while the young delinquents indulged in their own generation’s acclaim.

However The Jesus and Mary Chain are not your average throwbacks. So mercurial, so stratospherically important is their 80s output that even thirty years on from Psychocandy they’ve inspired a flock of young people and a cascade of attention from all quarters of the city and beyond, arguably outweighing the alternative option.

It’s a pan-generational legacy that the band’s Jim Reid is well aware of when Getintothis catches up with him ahead of the show. “It’s a pretty mixed bag to be honest with you” says the frontman of his new crowd. “It’s been like that for the past several years. There’s lots of young people out there and there’s people our age still hanging around.”

“It shouldn’t really matter whether you’re 20 or 50 out there, you should be into what we’re all about, we assume that’s why you’ve stumbled into the building” he continues, and though age has seen the singer mellowed to an extent their shows remain as opaquely intense as ever.

When the Psychocandy tour hit Manchester we were there to praise it as “A perfect storm from a perfect band… on this form, they are still the most thrilling and the most important band in the world,” a live experience Reid calls ‘essentially the same’ as those high-octane eighties outings.

“It’s strangely enjoyable to still be doing these kinds of things” Jim goes on, “we’ve gotten older, maybe a bit fatter and balder, but basically we make music for the same reasons we did back then, just for the love of it.”

It’s a live style that can betray more comfortable scenes behind the curtain than those infamous early days. “It might not come across that way – I look anything but relaxed on stage, but the fact of the matter is I’m a whole load more laid back than I was in 1985” says Jim.

“We’ve got nothing to prove all these years later, and some people still want to come and see the Mary Chain, so that gives you more of a relaxed attitude.”

“The Mary Chain can only ever be professional to a certain degree, though” he continues, allaying any fears of a blunting with age. “I always find it weird when people say ‘yeah, slick Mary Chain show’ because no such thing has ever existed and never will. We’ve still got all of the rough edges to it.”

And how rough those edges were back in the day. Decried as obscene by the tabloid mouth of decent society, infamous for the riotous scenes surrounding their temperamental sets, they were hyped as the 80s’ answer to the Sex Pistols, and for the band that was something to lap up.

“We were young, we were basically living out our fantasy,” Jim recalls. “We’d been stuck in this little dead end existence for longer than I could remember, then suddenly you’re in a rock band and everybody wants to know. So you indulge in all the things that a young kid would, like a kid in a sweet shop.”

“In a lot of ways with the hedonistic lifestyle you’ve got to cram as much in as you can before it all evaporates,” he continues. “you think, ‘well I like this, I don’t want this to go away’, so you spend a lot of time worrying if you’re going to end up working in McDonald’s in a couple of years.”

A lot of that, of course, was the product of some good old-fashioned press hyperbole, though, especially, for Jim, the political bent. “We at the time felt as if we were some kind of disease, a boil on the bum of the establishment or what have you, but at the age of 53 I can see how ridiculously naïve that was” says the singer with hindsight. “We were a little pop band in show-business, that was the reality of it.”

“We didn’t get within a million fucking miles of the establishment. At the end of it, in terms of pop music we were probably a bit more dangerous than your average band, but I don’t think there’s ever really been a rock band that’s ever threatened the status quo,” Jim surmises.

It’s the kind of romanticised, and ultimately false political rebellion that some of the older generation’s more loathsome fogeys are quick to decry as absent from our own era, but for Jim there’s no such divide.

“I think that with every generation’s music scene, there’s gonna be 99% of it that’s just dross that will be forgotten six months after it’s made” he asserts. “I remember when I was kid and everyone was saying ‘it’s all been done, there’s nothing new, nothings dangerous blah blah blah’, but it’s all bollocks. There will always be people that are trying to fuck with things and try and change the norms, and I’m sure that’s happening now.”

“I’m not saying that people now are watered down, I’m sure that when the Mary Chain were making Psychocandy there were a bunch of old fuckers saying ‘Christ I’ve heard all of this before’” he continues, “but I do find that the older you get you realise that after a while there is only so much that’s original, really.”

Speaking of originality, The Jesus and Mary Chain themselves can be credited as one of their era’s most influential outfits when it comes to the shape of the class of 2015, a legacy Jim’s happy to embrace.

“We wanted to be the kind of band that made people realise what was possible – it was easy to do, or at least it was easy to get off the ground” he says. “There were lessons in what we did, the same sort of lessons I learnt from the likes of The Ramones.”

“There’s an element of desperation when you can’t really play your instrument, and what sometimes happens is you’ll do something utterly unique, and I think my brother [William Reid, Jesus and Mary Chain guitarist] did that. He was no great technician, but he played guitar and continues to play guitar like no one else I’ve ever heard.”

Perhaps the most influential figure to hear those cacophonous caterwauls of feedback was Creation Records’ Alan McGee, who last year re-signed them under his management, as he had done so before in the group’s original run.

“I think at first he thought we were just a bit mental, and that appealed to him” Jim remembers of their first stint together. “He put on this gig in London that was more or less just a favour to Bobby [Gillespie, Primal Scream frontman and early Jesus and Mary Chain drummer].”

“He wasn’t that keen on the demoes we’d sent to be honest, and then we did the soundcheck and me and my brother were just screaming at each other and practically came to blows. ”

“Then we plugged in and it was just so non-musical I think he just thought ‘who the fuck are these guys?’ and he was literally frothing at the mouth like ‘brilliant!’ It went from complete indifference to wanting to do five albums in a matter of seconds.”

And what albums they were. At its heart, beyond their inflated insubordinate reputation, the reason The Jesus and Mary Chain still last like arguably no one else is for the transcendent, mutinous beauty of their music – a timeless assault on the senses to inspire all who hear it.

The fervour around the opportunity to catch the majesty of Psychocandy, Darklands and the innumerable overlooked gems that followed on their upcoming tour exceeds petty sensationalism, and is nothing more than testament to a band the likes of which we’ve never seen since.

“Music isn’t going to change the country or the world” Jim asserts at one point during our conversation. “It changes things in a small way because it affects certain people. There’s certain records and bands -they’ll live with you for the rest of your life and change your attitude towards the world.”

His own group are the shining illustration of his point. The Jesus and Mary Chain might not have been political revolutionaries, but they were, and will forever be life-changers.