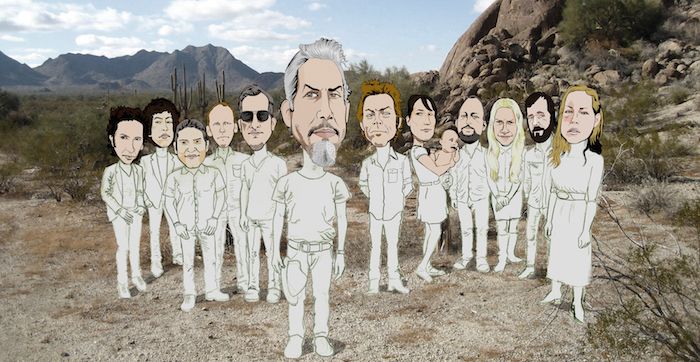 With a new album in the works to coincide with their 30th anniversary, Getintothis’ Adam Lowerson looks ahead to Giant Sand’s visit to Liverpool.

Celebrating their 30th year as a band, American rockers Giant Sand are set to bring their blues rock and roll sound for a performance at St George’s Hall on on June 3, courtesy of Harvest Sun and Liverpool Philharmonic.

Having first risen to prominence back in 1985, the Howe Gelb fronted outfit have released over 20 studio LPs, the latest being the 2012 album Tucson, a country rock opera which was released under the name Giant Giant Sand.

Now in their 30th anniversary year, the legendary collective are set to release a new, as yet untitled record in May later this year. The LP, which will be the first for three years will feature guest performances from Jason Lytle, Steve Shelley and The Common Linnets amongst many others.

The group have become known over the years for their Fall-esque member merry-go-round, with the line up often changing with each album. The current touring party features around nine members, and in the past has featured some notable names including PJ Harvey, and John Convertino and Joey Burns of Calexico, who are also set to hit Liverpool later this year with a show at the Philharmonic Hall on May 1.

With an extensive back catalogue of songs to pick from, and the new album in the works, the rootsy Americana sounds of Giant Sand is sure to be a great match for the cavernous St George’s Hall Concert Room.

Tickets for the show are on sale from February 11.