As The Pastels mark 30 years since debut album Up For A Bit With The Pastels with an appearance at 6 Music Festival, Getintothis’ Cath Bore explores the group’s ongoing influence.

Formed in 1982 in Glasgow, the phrase “cult heroes” could be invented specially for The Pastels. Moving on quickly from C86, the song Breaking Lines appearing on the NME‘s famous compilation tape, with each album they moved on from a world of button badges and fanzines to become eventual creators of dreamy, sophisticated records of not inconsiderable beauty.

The passionately independent group’s early recordings were made addictive by endearing earworm melodies, sweet shambling singles emerging on a smattering of different labels; Songs For Children on the Whaam! label, I Wonder Why on Rough Trade, Something’s Going On and A Million Tears on Creation Records.

The band’s line-up shifted and changed in those early days, but founder member Stephen Pastel/McRobbie remained the constant, steadying presence. Keyboard and bass player Annabel Wright (Aggi) joined in 1986, The Pastels releasing their debut album Up For A Bit With The Pastels the following year on Glass Records. Up For A Bit… is a classic pop record, one with an extra woolly jumper to keep the cold out, and laced up sensible shoes.

Drummer and singer Katrina Mitchell joined in 1990 and it is Stephen and Katrina who are the mainstay of the group nowadays, after Aggi’s departure in 2000 (although she contributed to the 2013 album Slow Summits, and supplies much of the band’s distinctive artwork).

The Pastels delight us with new material sporadically, averaging one album per seven or eight years, and perform occasional shows. As they admit themselves, activity is ‘songs, intervals, long intervals, clang, vibrant clang, sudden clang, no clang’.

They’ve gifted us five Pastels albums proper in all, the aforementioned Up for a Bit with The Pastels, the tougher Sittin’ Pretty (1989), followed by the positively dreamy Mobile Safari (1995), Illumination (1997) and the gentle and tender Slow Summits (2013). Collaborating with Japanese duo Tenniscoats in 2009 resulted in Two Sunsets, an underrated oft ignored album of fragile gorgeousness.

Illuminati (1998) is an album of Pastels songs remixed by Jim O’Rourke, My Bloody Valentine, Stereolab and others. Suck On (The Pastels) (1988) and Truckload Of Trouble (1994) are compilations no home should be without. The Last Great Wilderness (2003) is a mostly instrumental soundtrack album for the film of the same name, though notably contains the smutty little ditty I Picked a Flower, lyrics and vocals provided by Jarvis Cocker. Try listening to it without smirking. I dare you.

It is four years now since Slow Summits, but Stephen and Katrina keep themselves well occupied. In 2016 they provided harmonies on Ela Orleans’ You Go Through Me from her album Circles of Upper and Lower Hell, and last month Stephen Pastel sketched out the Glasgow vibe at the turn of the 1980s as the city changed its face towards the future, for the release of Strawberry Switchblade‘s lost 1982 4-Piece Demo EP.

‘Glasgow was starting to clean up its sandstone buildings and there was a feeling that it was slowly edging towards becoming a more outwardly cosmopolitan European-style city.  Sort of like David Bowie’s Berlin phase, I guess more than a few people hoped,’ he wrote. ‘Simple Minds were at the vanguard of this kind of aspirationalism and although sometimes ridiculous, they weren’t without a sense of social duty.  They donated an old sound-desk to their departing live engineer, David Henderson, who used it to document a madly growing local bands scene via his popular, friendly rehearsal room…’

Yet The Pastels themselves are unexpectedly also a substantial force for change along a similar vein. Stephen Pastel along with Sandy McLean (owner/manager of the Love Music record shop in Glasgow) and Shop Assistants’ David Keegan, released early records through their 53rd and 3rd label by Shop Assistants, The Vaselines, Jesus & Mary Chain, Beat Happening, BMX Bandits, and the Soup Dragons, from 1985 until the end of the decade.

In 2000, McRobbie and Mitchell birthed the Domino imprint Geographic Music, putting out records from the likes of Future Pilot AKA, The Royal We, Lightships, and  Maher Shalal Hash Baz. This month the newly revived Geographic releases Raining On Hope Street, the second single from Glasgow’s Spinning Coin, charmers of Teenage Fanclub’s audience  with their deceptively political and oh so pretty melancholic pop when they supported them on tour in December last year; a debut album produced by Edwyn Collins is due late summer. 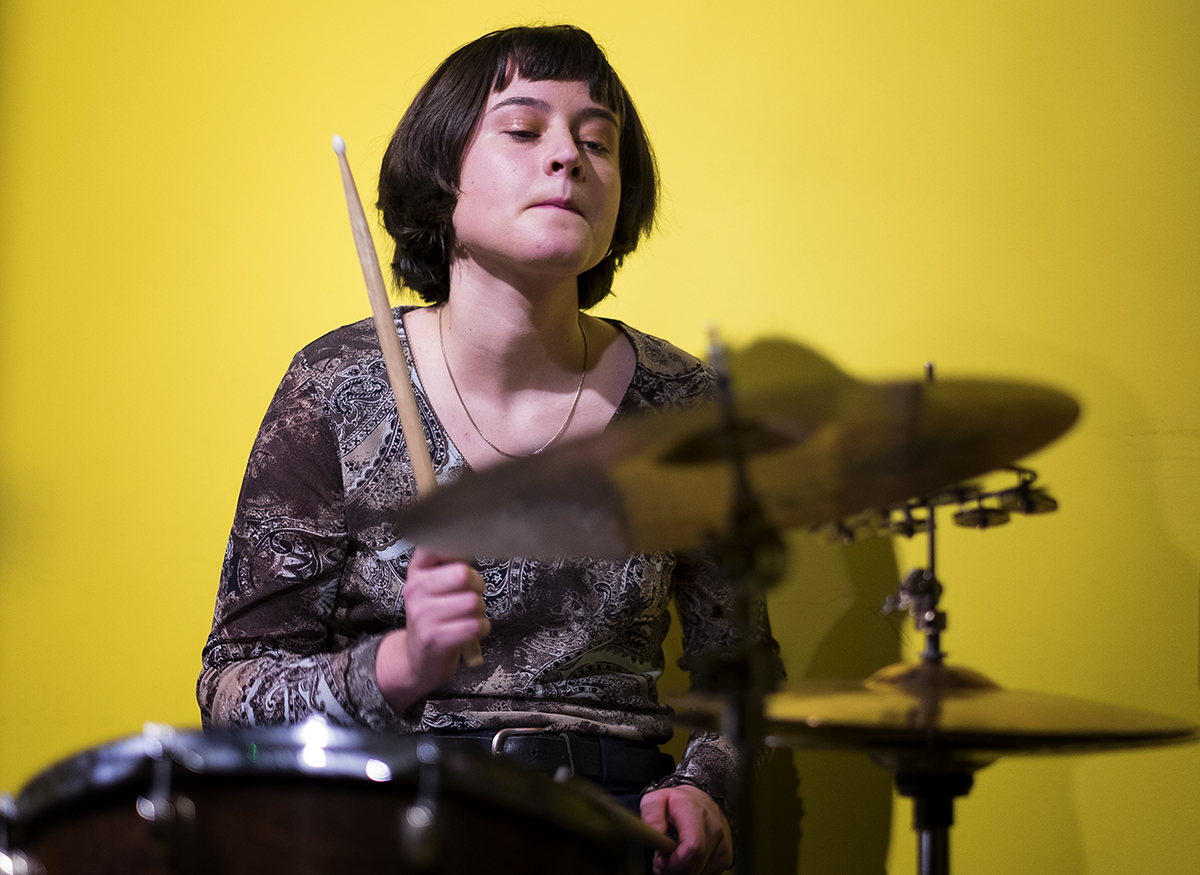 The Pastels’ influence shimmers brightly outside the city of Glasgow as well, new Heavenly Recordings signings The Orielles are big fans ever since Sidonie and Esme Hand-Halford, drummer and bass player/singer respectively, saw The Pastels play in Preston back in 2013 in their mid-teens.

‘They instantly inspired us to go away and write more songs with male and female vocals as they do this so perfectly. The rhythm section is also highly influential and I love the way in which Katrina plays the drums in an almost careless way, with washy cymbals and fills that sound as though they have been double-tracked. This DIY/lo-fi ethic is something that we have tried to emulate in our songwriting,’ Sidonie of the Halifax-based surf pop threesome tells us. ‘In particular the track Summer Rain (from Slow Summits) is just beautiful, melody is definitely the band’s forte! The end of the track is great too, how it turns into a sort of shoegaze wall of sound is something we have definitely been influenced by. Amazing!’

So yes, The Pastels, who at the end of March appear in conversation with Gideon Coe at 6 Music Festival in Glasgow, produce recorded work at an often glacial pace but when they do, it is loved and affections remain strong (when the band were a clue on brainy BBC quiz show Only Connect, there was a frisson of excitement from fans on Twitter, giddy with surprised delight). They feature in a forthcoming documentary, Teenage Superstars – the fall of Postcard & the rise of 53rd and 3rd Records, and notably, the number of songs written about, or which reference them is more considerable than you’d maybe imagine.

In Pastel Blue by Sister Vanilla, Linda Reid, sister of Jim and William Reid of Jesus and Mary Chain, recalls crashing her car whilst blissing out to their songs.  In Van Van Van , Cud confess to plagiarising Truck, Train, Tractor, claiming it fell of the back of a van; finders keepers. Goodbye Our Pastels Badges from Flipper’s Guitar tells the tale of an innocence and youth lost along with a simple button badge and homemade haircut, and Spearmints’ Shirley Lee  compares the joy in his heart for Scottish Pop with his in real life flesh-and-blood love. Aww.

Here’s five of the rest of the finest, cutest and funniest tributes to The Pastels in song:

I’d have given them the elbow myself, but singer Richard assures a lover of his continued affections despite her taking a hammer to his copy of The Pastels’ 1986 single Truck, Train, Tractor and hating Up For A Bit…’s Baby Honey. The Leeds five piece were named after Beat Happening’s 1988 song The This Many Boyfriends Club, yet another essential link to the band themselves.

A magnificent exercise in ripping the piss out of that namedropping bloke – and it’s always a bloke, don’t argue – who brag of considerable record collecting prowess, owning that record you’ve ever been after for yonks and telling you all about it at every available opportunity. The said bloke’s copy is signed by each member of the band, honest to god, including the one who died in an unfortunate gardening accident. Yeah, him. Only really it’s on a crappy cassette tape, innit. On On Tape, Pooh Sticks boast possession of The Pastels’ rarer than hens teeth 7” single from 1982 Songs For Children on Whaam! Records, along with Orange Juice’s Falling And Laughing – the original Postcard version OF COURSE. There’s a sweet fade out in the end, echoes of I’m Alright With You… adding further charm.

A cross between a love song and a murder ballad, a plea from Black Tambourine’s Pam Berry to Stephen Pastel to dispose of poor Aggi, to ensure true love flourishes and blooms.The Maryland twee popsters shake their heads ruefully, and lament ‘We both know it’s got to be done’, the logic clear enough. All’s fair in love and war, yeah?

The music police and your nan might tell you that a neat and tidy voice wins out every time, but Sprites have their own opinion on the matter. In I Wish I Sang a Little Better, wonky singer Jason Korzen laments his lack of vocal vigour but reckons if you really believe you have to sing properly, then you’ve never heard Stephen Pastel. He then go on to compare Stephen’s voice to the, er, looseness of Bernard Sumner from New Order, which is a bit much to be honest, but Korzen’s original point still stands

There’s nothing more bitter than a jilted lover, and it makes for magnificent sentiments in pop songs. From the Seattle band’s album Old Traditions, New Standards, Tullycraft gleefully point out how uncool the new boyfriend is, taking a guess that ok, he might know who the Breeders are, and Green Day, woop de woo, but does he know The Pastels? No, he does not. Dump him, then.  Sounds reasonable enough to me.