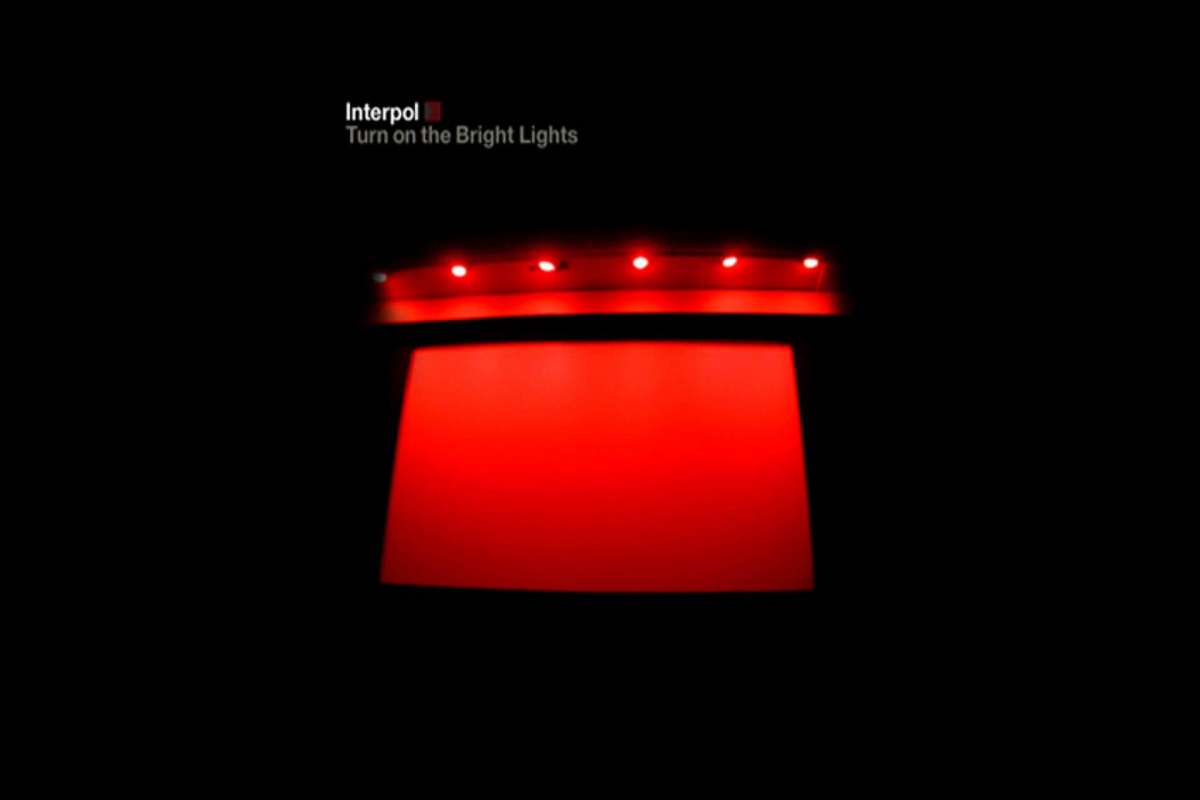 Turn on the Bright Lights

Interpol’s Turn on the Bright Lights is 15 years old and Getintothis’ Laura Brown celebrates it as a landmark record.

When you’ve lived in a place for long enough you have this quiet dream.

You imagine you open the wardrobe and find a box long forgotten. Inside is something beloved you’d lost. A picture of you and your brother you’d half imagined was a memory. A book you read obsessively for a summer and then tossed aside. The brooch your nan bought you misplaced. You open the box and the emotion floods out of it. It doesn’t matter how long has passed.

Music, and its ability to weave its tendrils into every fibre of our beings, has that same ability to tug our hearts back to a specific moment. When Interpol released Turn on the Bright Lights in the summer of 2002 it was part of a gathering wave in what people were already starting to call a post punk revival.

The early part of any decade is a difficult one to define. But not for the 2000s. The shattering terror of 9/11 ripped us out of the warm womb of the 90s. If you think 2016 was bad, you should have seen 2001 and 2002. Uncertainty barely begins to cover it. It was terror. We had no idea what would happen next.

The first few bars of Turn on the Bright Lights, the jangling, close stringed introduction, casts aside what has gone before. It ebbs and flows, turning the page and beginning  a new chapter. The guitars start so close together, intertwined. The drums ease in. While outside everything is raging, while we pit nation and religion against each other and define axis of evil this sounds almost like a march, a unity in vision. Togetherness in sound.

‘Surprise, sometimes, will come around’.

Change is a constant, we are reminded. Deal with the change. Understand the change. Roll with the punches. It felt as though you were walking along a corridor and could hear music drifting from within a room. You left the path you had been on to follow the sound.

Keep up to date with Getintothis’ monthly album club

This album was succour. The idea that music, amidst all the horror and carnage, would save us all. That bands and musicians would, while leaders contemplated pushing buttons and killing millions, continue to create new things, to tell new stories, to continue to inspire and surprise you. You have no idea how important that was in 2002. It was a most significant self-determination.

There’s also an important shift that’s happening here, and it starts before 9/11. We’re entering a new decade here that many in the UK scoff at musically. The charts are, it has to be said, as bland as a house that eschews salt.

There was also, a sense in 2002 of the UK music scene resting its laurels on the previous decade. The 90s had opened with a US west coast shoegazing, which migrated across the Atlantic and evolved into Britpop. Graham Coxon leaves Blur just months before Turn on the Bright Lights is released. Britpop is dead and buried.

We forget that while we in the UK swished in cords and velvet jackets, that the West Coast Revival travels across the US to the east and becomes something different. Still authentic, still rooted in underground clubs, but that Britpop is book ended by two punk revivals in the US is interesting.

The sound has matured in that decade. It’s sharper. Interpol only got together in 1997, but they sound like they have known each other forever. They, along with The Strokes who had released Is This It the year before, sound like the next logical clause in a sentence.

That two timeless, identity defining albums would be released so close to each other, geographically and culturally makes you think about when we were all having this conversation where we talked about how important Britpop was, other people were having far more interesting conversations.

Albums of place and identity are often the most important. Like the concept album they feel more like art. New York, in suffering the most horrific, violent, real time terror attack, defined itself from within. It would be the city that found its voice again and returned stronger.

We can be the change that happens. We are our own voice. We are not our grief or our pain. We are the future and no one can ever take that from you. It’s a powerful message.

While this album is very much like a time capsule, a bottling of one of the BFG’s dreams, it’s also an album about looking forward. As a debut to start an album ushering in a new sound and identity and then, only a few tracks later to be determinedly asking ‘what’s next?’ takes real balls.

‘One day we’ll live together, And life will be better,I have it here yeah in my mind, Baby, you know someday you’ll slow’

‘We’ve met, fallen in love, had our first fight, moved all our things into our first flat, lived a life and started to crumble in the time it’s take you to realise music has changed. The next five years are dominated by bands trying very hard to be the next Interpol. Hell, within the next ten years Interpol are trying really hard to be this Interpol.

But you can’t blame this album for all the Razorlights and Fratellis and Kaiser Chiefs that come next. In the same way you can’t hold it responsible for the Elephants and the Black Rebel Motorcycle Clubs and the Bloc Parties you’re yet to enjoy. It is the start of the very vinyl revival we find ourselves in now.

Of underground clubs, of the musician’s musician, of the album being all, of a rich and vibrant live music scene, of the city as greatest love and most terrifying foe. Of living a life on the city streets and it being your best friend along with your backdrop.

As the world becomes more global we become more tribal and music begins to reflect who and where we’re from. This is one of the albums that begins the birth of that gritty self-identity in music.