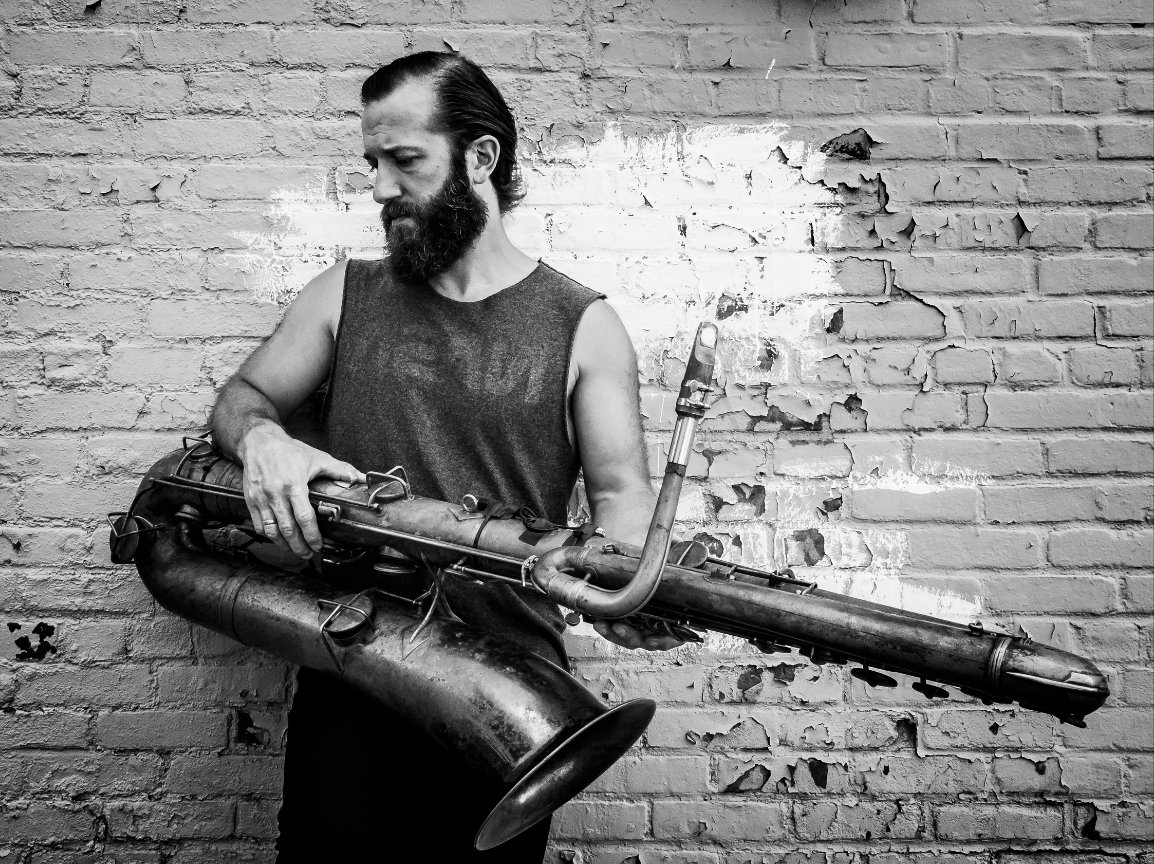 Getintothis’ Matthew Wood sends you more than showers this April with some fine tunes to kickstart the month, including some of the most outrageous saxophone work and another cracker from hip hop’s MVP.

Colin Stetson – In The Clinches

Radical multireedist Colin Stetson follows up his astounding debut track Spindrift with another fantastically immersive track of raw emotion and talent. Stetson maybe be familiar to some of you through his collaborations with huge acts such as Arcade Fire and Bon Iver; while his solo venture is less accessible, it is arguably the most original piece of music you’ll hear this week/month/year/ever.

Stetson’s aim with this one was to create a direct parallel to Spindrift. While Spindrift pulses elegantly on waves of arpeggiated sax, In The Clinches destroys any sense of tranquility and instead takes over your faculties with its manic urgency and bludgeoning energy.

Relentlessly it thuds and bumps before elephant-esque bursts of sax complete the conquering march. Spindrift will caress your very soul, while Clinches rock and ruin, but both will astound you, I can guarantee. Phenomenal.

His solo album, All This I Do For Glory is out April 28.

At long last! After we were promised a second album from Melody Prochet back in 2015 but it never came, finally the French songwriter has marked her return with a brand new track and album titled Bon Voyage, due out in the Spring.

At over 6 minutes long, the track spans familiar territory as well as more experimental episodes, including groovy pipe solos and rumbling jungle beats. There’s still that distinct vintage feel, with string accompaniments pulled straight from the Golden Age of cinema and that elegant vocal that was such a strong feature of her 2012 debut album.

PLAZA – Deep In My Head

Featuring heavily in recent Singles Clubs, Hartlepool’s talent youngsters PLAZA are taking their brand of ‘post-indie’ to the stars. They’ve amassed hundreds of thousands of listens through Spotify alone and with their debut self-titled EP set for release April 14, it’s safe to say 2017 is going to be a big one for PLAZA.

Their fourth single, Deep In My Head sees them channel their energy wisely; the familiar tropical, delay-soaked riffs intact while mellow clap beats set them up for a roaring onslaught of all this band is about. The chorus blasts all calm from the waters and you can hear the boys’ passion in their distant lyrical screams.

As long as they don’t wear their voices out before an imminent tour, you’ll be seeing a whole lot more of this North East quartet.

Broom of the System – Marsha

I only discovered Broom of the System a couple of weeks back and featured one of her older tracks in Singles Club #150. Luckily for us, her  latest helping of irresistible lo-fi arrived on April 1 and is her finest outing yet.

Marsha quivers and palpitates with emotion through dark, warbling synths and gentle, organic guitar chords. Her use of melody and supersonic soundscapes are almost overwhelming, and Julia herself is ‘sick of feeling everything‘. She manages to encapsulate emotion effectively and above all, poetically to the point where you can’t help but feel them with her.

An aquatic synth riff joins arms with a blend of spiritual calls that reach an unresolved finale, leaving us staring into a realm of uncertainty after such raw portrayal of emotion. Broom of the System may not get your feet stomping, but she’ll certainly get your heart pumping.

‘Sit Down. Be Humble.’ Urges Kendrick Lamar Duckworth from the chair of Christ in a scene depicting Da Vinci’s, The Last Supper while his ‘disciples’ get tipsy on red wine. Follow that with scenes of faces bound with burning rope and Lamar in some clerical clobber with a beam of light shining on his back, and you get the impression he’s trying to tell us something.

But what? Many have already labelled this the ‘right stroke’ to Big Sean after his previous track The Heart Part IV dished out the first blow. Lyrically that may be, but there’s so much symbolism in the video, which perhaps steals the limelight from the track itself which edges long on a deep, plonky piano beat and never really hits the heights we know Lamar is capable of.

Despite the obvious comparisons to Lamar’s ‘godlike’ genius which has made him arguably the greatest rapper of his generation. Anyway, let Lamar and his visual antics take you on a wacky journey into the mind of a superstar. K Dot is back.

Hailing from Newcastle-Upon-Tyne, singer-songwriter Jake Houlsby has been winning us over with his dreamy musical craftsmanship and sincere lyrical delivery.

His latest, Oklahoma is fueled by a sense of nostalgia and mysticism attached to the South American states, weaving a tale of love for Oklahoma state and an attachment to nature and the wide open expanses of the American soil. The lingering taste of summer, the workers tending the land, trains that shuttle across states; they’re all neatly encapsulated into this shimmering track.

Houlsby has a bright summer ahead of him, and his euphoric folk-infused story-telling is taking him places, just like his songs transport his fans.

Another Hartlepool-based one to watch, James Leonard Hewitson channels his subtle wit into a fine brand of pop that surfs on a shallow wave of 60’s psychedelia and takes a load of in the world of 90’s slacker rock.

Dream Person toys with gender roles and finding that perfect somebody, tackling issues head on in his lyrics and swamping their low-key delivery in swathes of indulgent synths and dazzling guitar; it’s a neat combination that is as uplifting as it is laid back.

Globe-spanning, multinational jazz ensemble KUHN FU embrace all manners of feeling and emotion and allow these to resound compositions that range from frantic, bass-heavy mind ticklers, to the slow jams that effortlessly ooze cool and talent.

The band’s latest album, titled KUHNSPIRACY is said to formulate its approach from light-hearted themes of ‘failure, death and humanity‘, so we can expect a breezy affair i’m sure…

What astounds is KUHN FU’s versatility, they seamlessly move through influence and time signatures yet this is expertly funneled into their slick brand of jazz that recalls new-wave jazz pioneers Comet Is Coming and GoGo Penguin.

You can preview the album below!

Slowdive – Sugar for the Pill

The shoegaze pioneers Slowdive are making their return but in unfamiliar style in their latest single, following up their comeback single Star Roving.

Setting their fuzz pedals to one side and working in sharp, crystal bursts of guitar, the final product is a mellow yet melancholic 80’s pop number that plods along gently but makes up potency in the familiar dreamy vocal and synth combos.

Sugar for the Pill showcases the versatility and brilliance of a creative force that’s lay dormant for decades; but man are we glad to have them back. Long live shoegaze.

With a third record in the pipeline, Maryland-born Cali rapper Logic is showing he’s one of the realest rappers there is with his consistently brilliant rhymes and like many, battling through the toughest of times to perfect his music.

Everybody traces similarly tricky and fluent bars to Kendrick Lamar, finding rhythm where others could not. His lyrical prowess is neatly cushioned by some spacey vocal samples and slick bass bends, cementing his effort alongside the pinnacle of hip hop right now.