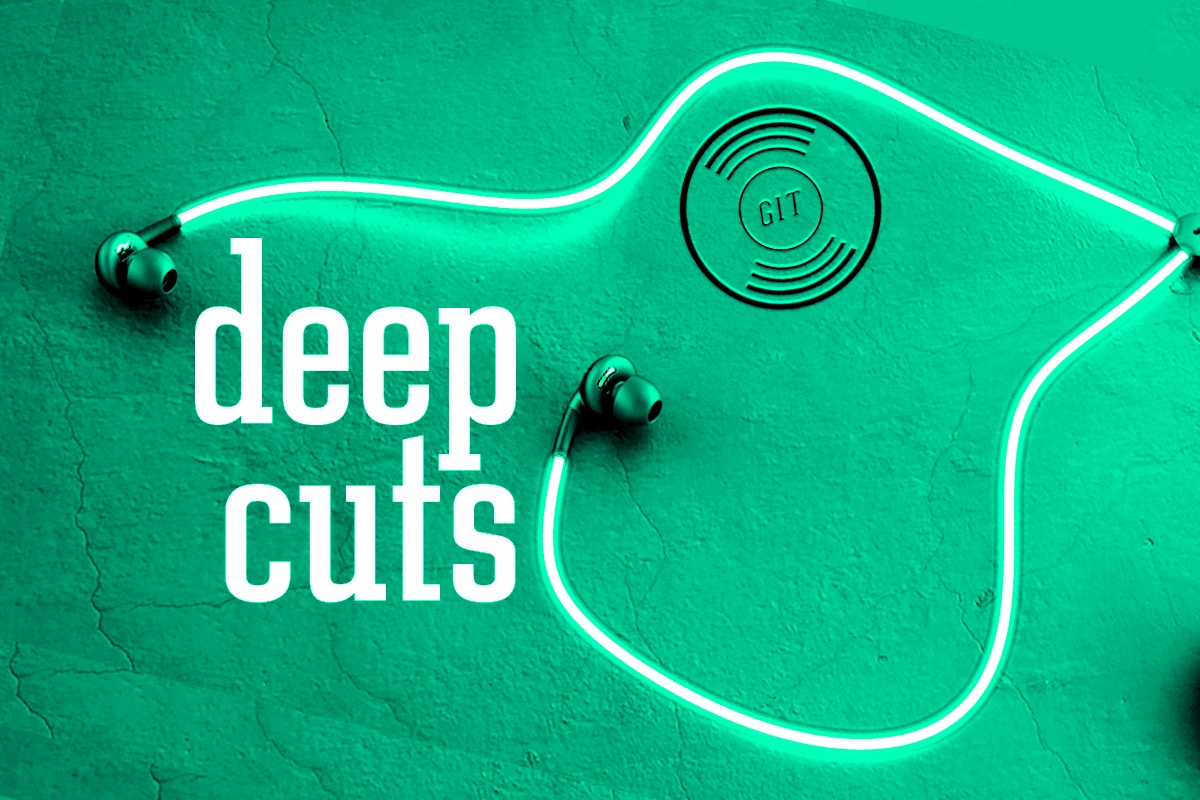 After a difficult week for the UK, Manchester and music fans worldwide, Getintothis’ Cath Bore discusses the freedom for women and girls within music, while our contributors pick our top tunes from May.

The bombing of the Ariana Grande concert last Monday evening in Manchester, the audience largely a mix of teenage and pre-pubescent girls and members of the LGBTQ community, brought issues of freedom to the fore in a massive way.

The freedom of women and girls to move around freely in general outside their homes away from supervision was a big part of that, the freedom to make choices and do what they like without physical or less visible restraints restricting activity. The phrase ‘no one should go to a concert and never come home’ was one bandied about last week one thousand fold, and although it is an emotive, sentimental phrase that gives no solution, it has a kernel of truth in it anyway.

The consequences of the attack have had consequences close to home, here on Merseyside. Attending the Sound City festival this weekend, whether it was to see the well-known name artists on the bigger stages or checking out the stars of the future, having police with guns amongst the crowds and security staff frisking everyone on the way in was “uncomfortable”, as a friend said.

The cops and security staff were pleasant enough, chatty even, the police outside at 11pm waving a cheery and amiable goodnight, but having security to this degree at a local festival, where bands you see in support slots at O2 Academy or showcasing at Buyers Club or EBGBs are playing, is unfamiliar and alien. This isn’t a criticism of Sound City or the police; they had to be there. After Manchester, I’d have been a bit disturbed if they weren’t.  Yet it’s there anyway, isn’t it; a chipping away at freedom, movement, expression.

When we go to see new music, on the surface it’s an easy ride we have here in Liverpool, all told, using broad brush strokes and without examining it too closely; cheap ticket prices, accessible and friendly venues in the main.  But thoughts have been drifting into my own mind of late about women and girls at gigs, since last Monday, and after the Cabbage “incident” as it’s commonly referred to now, the one that happened during a support slot for Kasabian in April, after which singer Lee Broadbent apologised for something he claimed he never did in the first place.

The “incident” that everyone has now forgotten about.

New bands are after building their fan base, aren’t they? That’s why they do support slots, to earn the fandom of the main band’s audience. Be a waste of time them turning up otherwise. Cabbage are a new band still, in the grand scheme of things; they are no household name. Not for their music, anyway.  If women and girls are made to feel insecure and unsafe at a gig by a new left-leaning band looking to spread the word, one where they assume everything’s gonna be straight up and cool, that’s not good, surely; from neither the band nor the audience’s perspective.

Freedom for women and girls at gigs and how they consume music are ongoing issues. For every music reviewer who smugly comments on teenage girls in the front row of a boyband show, or female students at an indie band’s gig, questioning and analysing their motives for being there, or observes that mums (mid-week too, tut tut) are present at a sit down show at the Philharmonic, I have to question why.

Is it a suspicion of women and girls getting together en masse? Is it cos it doesn’t involve you? Help me out here, folks.

The way I look at it, being snobby over girls screaming at Harry Styles onstage or a woman with her mates enjoying Josh Groban singing love songs at them and being a bit cheeky and charming, means you’re pissing over their freedoms. Why? Because the music consumed by others but doesn’t have to affect you; you are not the centre of the universe; if you hate light indie pop like, say, Blossoms, it doesn’t make the music they make less important or valid.  The consumption of that music has nothing to do with you, it does not affect you or cramp your style. And neither does it mean that those enjoying it are thick or easily led, the same way (I suppose) that following a football team doesn’t make you a sheep.

Responsibilities lie with the male gig going population too; no woman should have to have to see some bloke in front of them watching a pornographic film on their phone, the man determined every woman behind him should watch it too by holding it up high, and obvious. I have. Stuff like that happens more than it should.

With Manchester in mind, the conversation last week about girls at gigs and the preciousness of first gigs showed a lot of positivity, and support. It was inspiring actually. Be positive if that train of thought carried on, and bloomed into something bigger and permanent. No one should go to a concert and never come home, yes indeed. A round of applause for that, certainly; but furthermore anyone, women and girls in particular, who wants to, should be able to go to concerts without others passing comment. Cath Bore 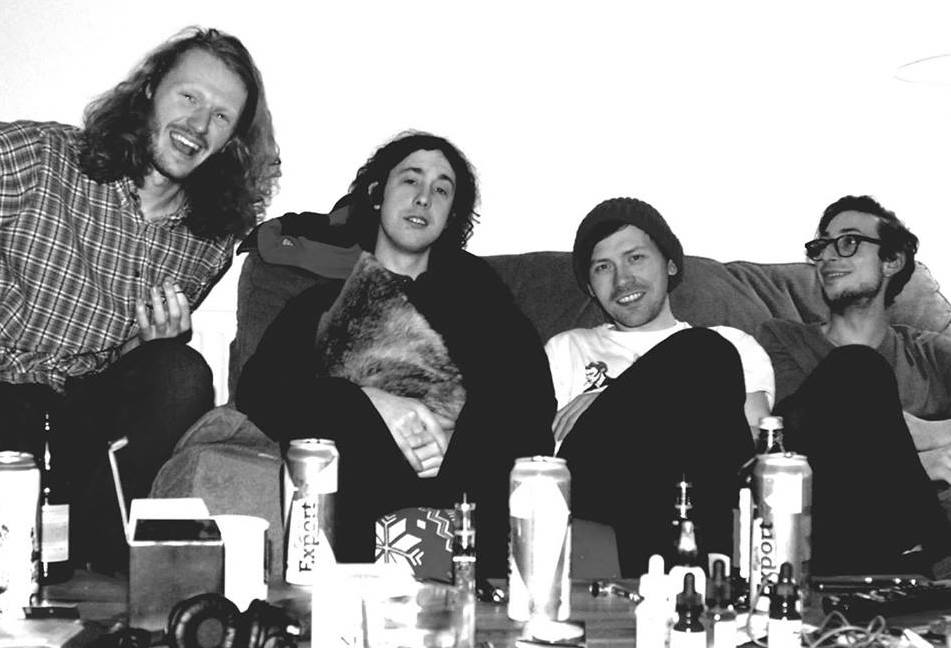 This meaty jam from Newcastle’s EAT FAST is one to get your heart racing! Beginning as a solo recording project and blossoming into a full blown live act, the quartet blend garage rock and grunge, bolstered by measured, lo-fi riffs.

Think boisterous blasts of early Wavves meets LA noise rockers, No Age, charged by pounding floor toms fuzzed out vocals and the sludgiest of bass riffs, it’s a sweet concoction of influence topped off with a simple lick and droning vocal tones that worm their way through the murky, manic backdrop. 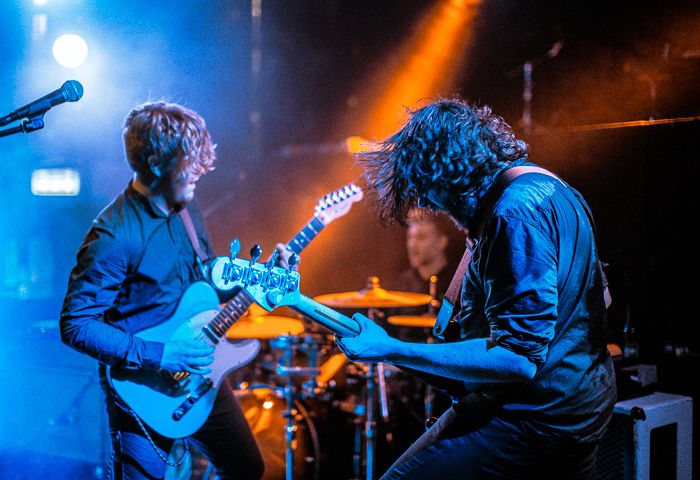 Alpha Male Tea Party – Nobody Had The Heart To Tell Him He Was On Fire
Ahead of their forthcoming album Health, released towards the end of June, the bearded Liverpool trio of Alpha Male Tea Party have offered us a small glimpse of things to come.
Nobody Had The Heart… is a rollicking instrumental that makes you sit up and take notice. Like the soundtrack to an incredible kids TV show that might have starred a superhero having a nervous breakdown, the track crunches along powerfully with gleeful abandon.
While more playful than anything on their previous album, the overlooked Droids, Nobody Had The Heart… is still undoubtedly Alpha Male Tea Party. The taut and precise math rock riffs and shifting aural textures are testament to that.
There’s a sense of the band having slightly more fun than usual here though, which leaves us itching to hear the new album. 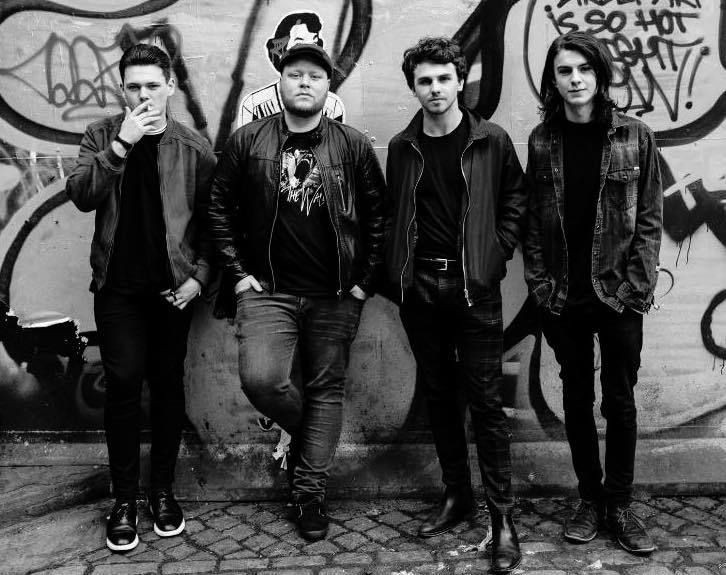 Proletariat are the latest band to be making new sounds down the M62. Mr Brown is the lead single from their debut EP Always The Same, and it’s a signal of intent. Bolt your doors, Proletariat are looking to break into your house and blow the roof off.

Mr Brown is an in your face punk tune that’ll rattle through to your core, definitely not for the faint hearted. In the live scene they’re gigs are frantic and full of sexy garage riffs, it’s an infectiously energy filling tune.

Fresh off a This Feeling backed sell-out EP launch at the new Northern Quarter hangout Jimmy’s, they’re coming at you with some more shows to be announced and a couple of festival slots including Sound City and Cotton Clouds. 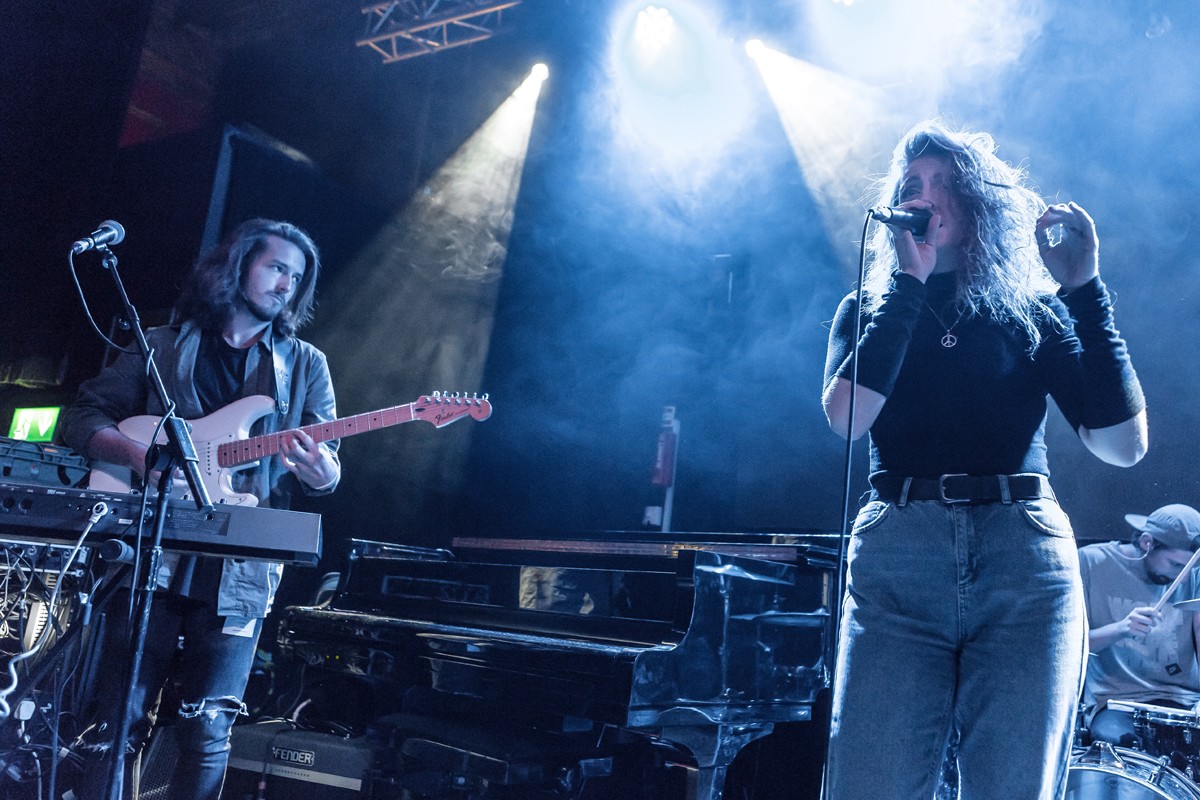 Deliah – Waiting for the Rain

Livepool based contempary R&B duo Michelle Harris and instrumentalist Alex Dopierala form Deliah. A band who have already been featured on TV shows and in magazines for their last single Better The Devil.

Now the latest release from the Deliah, Waiting For The Rain, brings a twist on the classic radio friendly R&B, with the steady beat throughout the track and the vocals floating throughout the verse and then the chorus taking control as the song erupts.

The track has all of the energy and emotion you would expect and desire from a great modern R&B song with its catchy hook lyrics and melodies that will not leave your head.

They will be playing a fundraiser for Whitechapel Centre at 24 Kitchen Street, July 7, which you won’t want to miss. 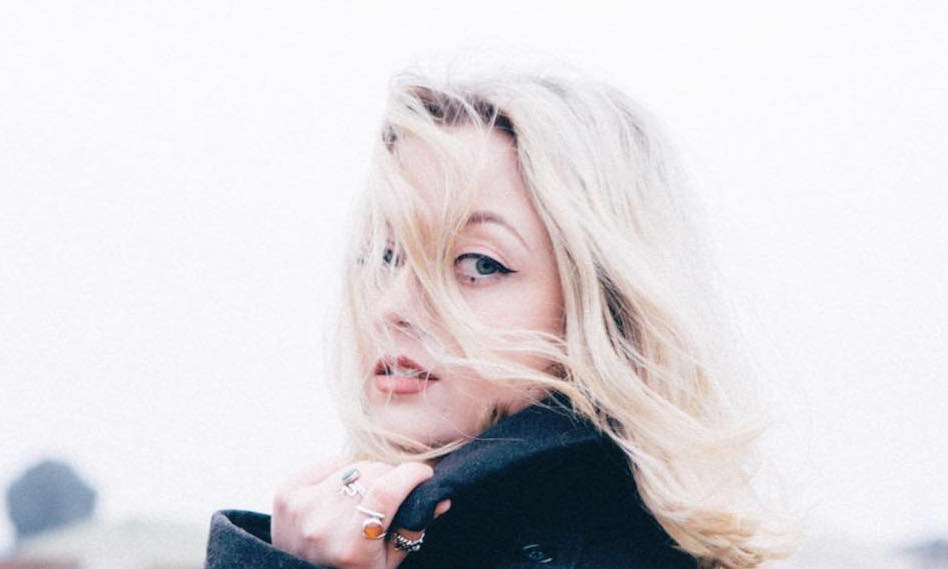 With a sophisticated and rather passionate new track, the South London-based singer-songwriter Caswell has given us another slice of her unique pop stylings.
Following on from Animal, her previous single, Brother finds the singer in inquisitive mood. “Brother, won’t you tell me why you’re sad” she yearns, her jazzy Brit School vocals floating high above a dark descending chord progression and bassy synth sounds.
“I am not the enemy” she sings, in a starkly personal message to her estranged brother. Lyrically emotional and raw, this is an artist unafraid of putting her heart on her sleeve.
For all the heaviness of the lyrics though, the tune as a whole is surprisingly light, flowing deftly from beginning to end.
Caswell is a singer with a big future ahead of her and a rapidly growing fan base behind her. On this sort of form it won’t be long before she’s a household name. 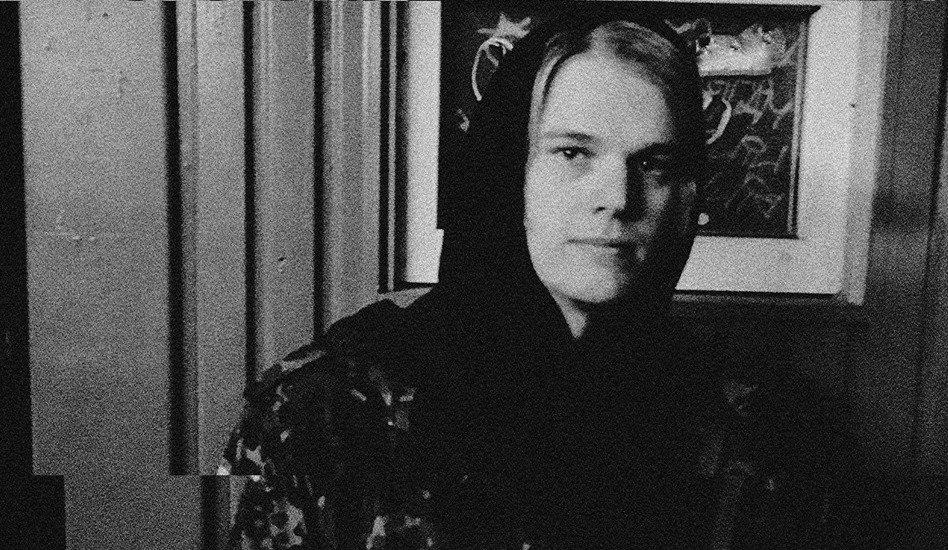 A hail of programmed feedback introduces us to the world of NONN, before a drum machine and a pulsating synth bassline start the song proper.  NONN would appear to have one foot in the 80s, redolent of such Peel session favourites as X-Mal Deutschland or Test Card F, while the other foot is in  a more contemporary camp, with Ladytron being an obvious touch point.

The effect is at once dancey and unsettling, the discord of the keyboards purposefully at odds with the song and creating an interesting tension. Personally, I would be intrigued to see which direction NONN take and maybe to hear what they would sound like with a full band.

It’s always impressive to find bands carving a sound that owes little to contemporary trends, and NONN are doing that with some style. They may also be finding both a niche and an audience for themselves. Good stuff. 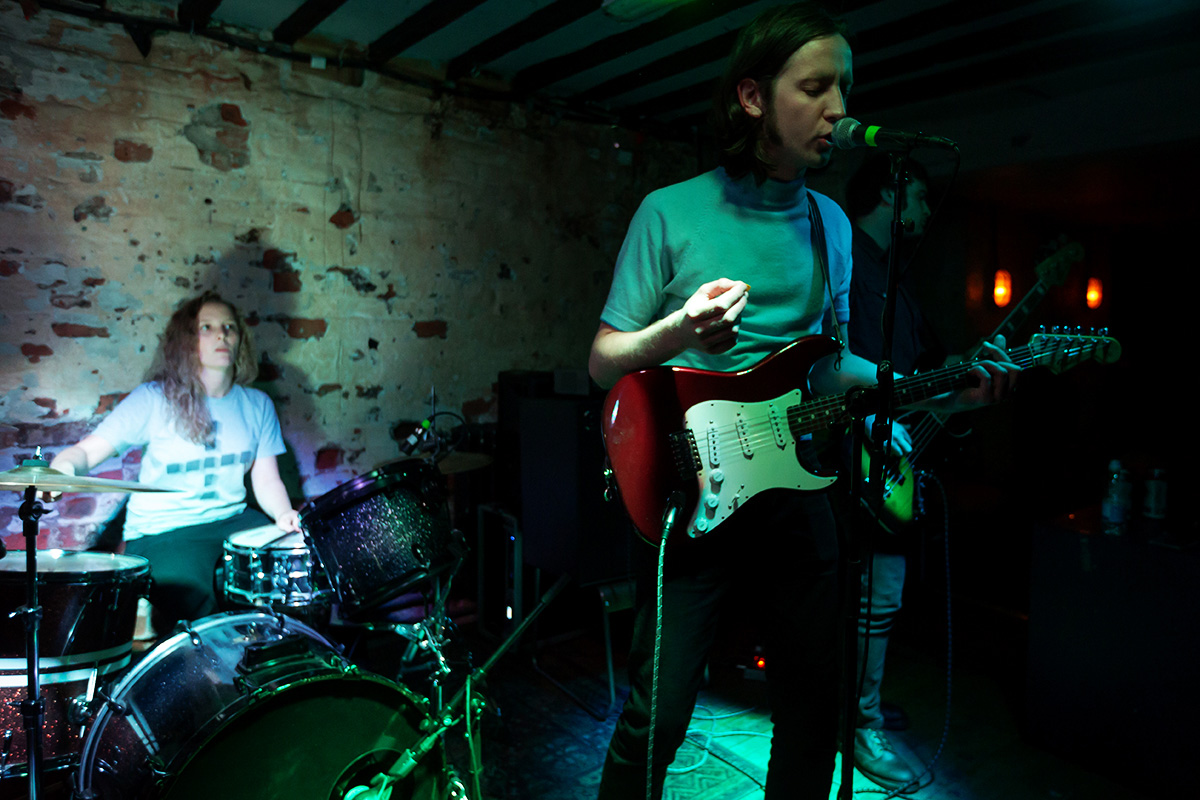 There’s certainly no shortage of psychedelic inspired rock bands on Merseyside, and Pale Rider are just the next in a long line from the city. This saturation of artists make it incredibly hard to get noticed, so you’ve got to have something about you to break through the noise.

Through their live performances and tracks like their recent demo The Modern Lovers, recorded at Pirate Studios, Pale Rider manage to do just that. Reports from their support slot with the Lucid Dream suggest the four piece are a live outfit to be reckoned with, while their handful of recordings suggest menacingly hypnotic sounds with effected guitars, stoner rhythms and faraway vocals.

We can’t wait to see them at our next Deep Cuts Live. 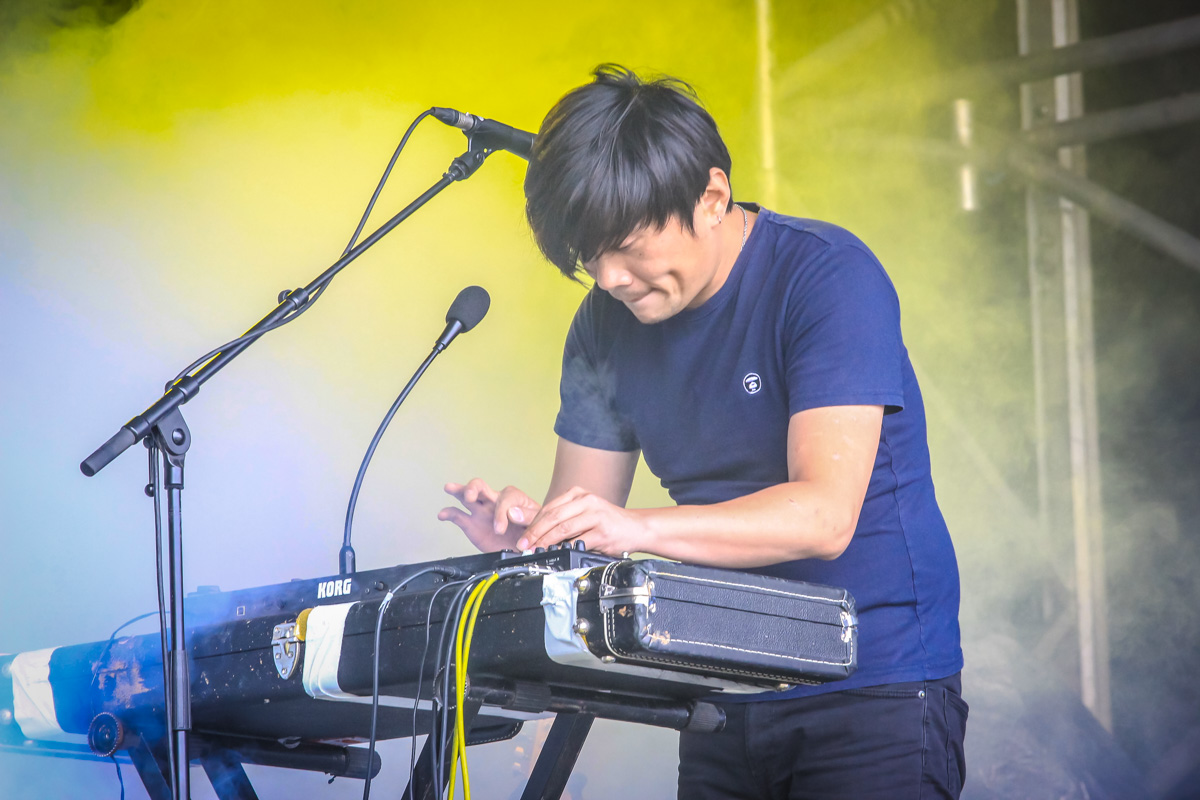 Set to release their debut album Before The Applause on Liverpool based label Modern Sky UK, Chinese post punk heavyweights Rebuilding The Rights of Statues, or Re:TROS, have released the first teaser in the form of single 8+2+8 II.

Coming in at over 10 minutes long, the track is a mesmerising, industrial kraut juggernaut, pulsating along driven by an intense rhythmic drum beat. The track feels constant and motorik, yet warps and moves within your mind as it moves along. Put it on loud enough and it’s genuinely disorientating, and one of the most compulsive and interesting new tracks we’ve heard in some time.