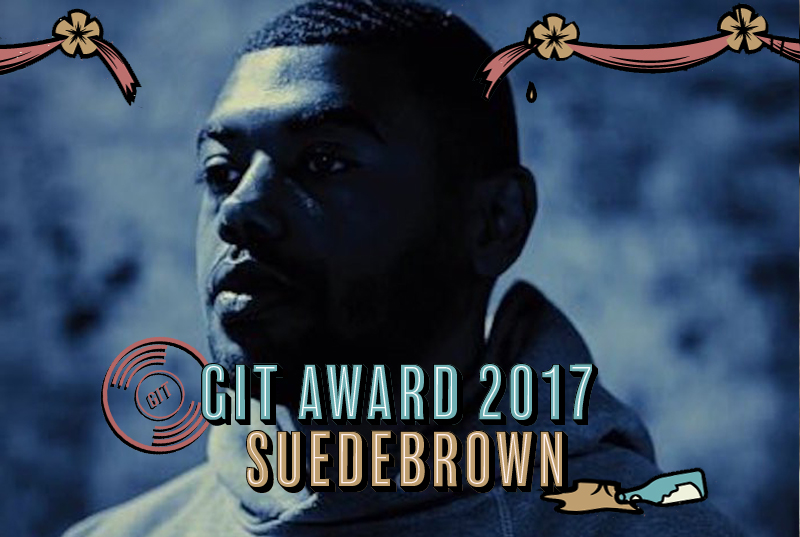 Discussing parental record collections, Wu Tang Clan and working with Steve Levine, Getintothis’ Glyn Ackroyd caught up with rising producer and DJ Suedebrown on the back of his GIT Award nomination.

As the sixth GIT Award ceremony approaches we catch up with nominee Suedebrown in FACT on the sunniest, hottest afternoon of the year. “This is great, sun at last, you forget what an effect it has” he says by way of a greeting, easy smile on his face.

The producer and DJ has been nominated on the back of a couple of years of real progress and a growing fan base as his remixes and original compositions have garnered excellent reviews and provided the opportunity to work with the likes of legendary producer Steve Levine.

He was born in Liverpool, where he has spent most of his life, other than a couple of years in London post-college, during which he “did a bit of music, but mostly as a hobby”. Music has always been part of his life and his earliest influences combined his mother’s love of Sade, Maxwell, Erykah Badu, Jill Scott and Stevie Wonder with his father’s love of UK Garage (“my dad fancied himself as something of a Garage DJ” he says with an amused look).

He talks about the first album he bought: “I wasn’t allowed to bring home anything with any swearing in it so I used to listen to stuff at mates. When I was 10 me and my mate saved up and went out to buy the first Wu Tang Clan album, we split the money between the album and Pokemon cards”.

At family get-togethers the competition to get to the turntable was fierce. His older cousin was generally the man in charge and it was something of a rite of passage when he was first allowed to select a few discs for the gathering. “Even now, when I’m chilling out listening to music, the last 30 seconds of a song make me feel uncomfortable, I’m thinking what’s next, what will work. It’s a curse”.

It might be a curse when you’re trying to be easy on a Sunday morning but that eternally questioning nature is surely a blessing when you’re behind the decks playing to a live audience or in the studio searching for inspiration, looking for that particular sample that will lift the track.

We talk about some of his music, particularly two tracks that almost book end his career to date, Indigo, produced five years ago and Like The Subway In Harlem which dropped onto Soundcloud only last month. 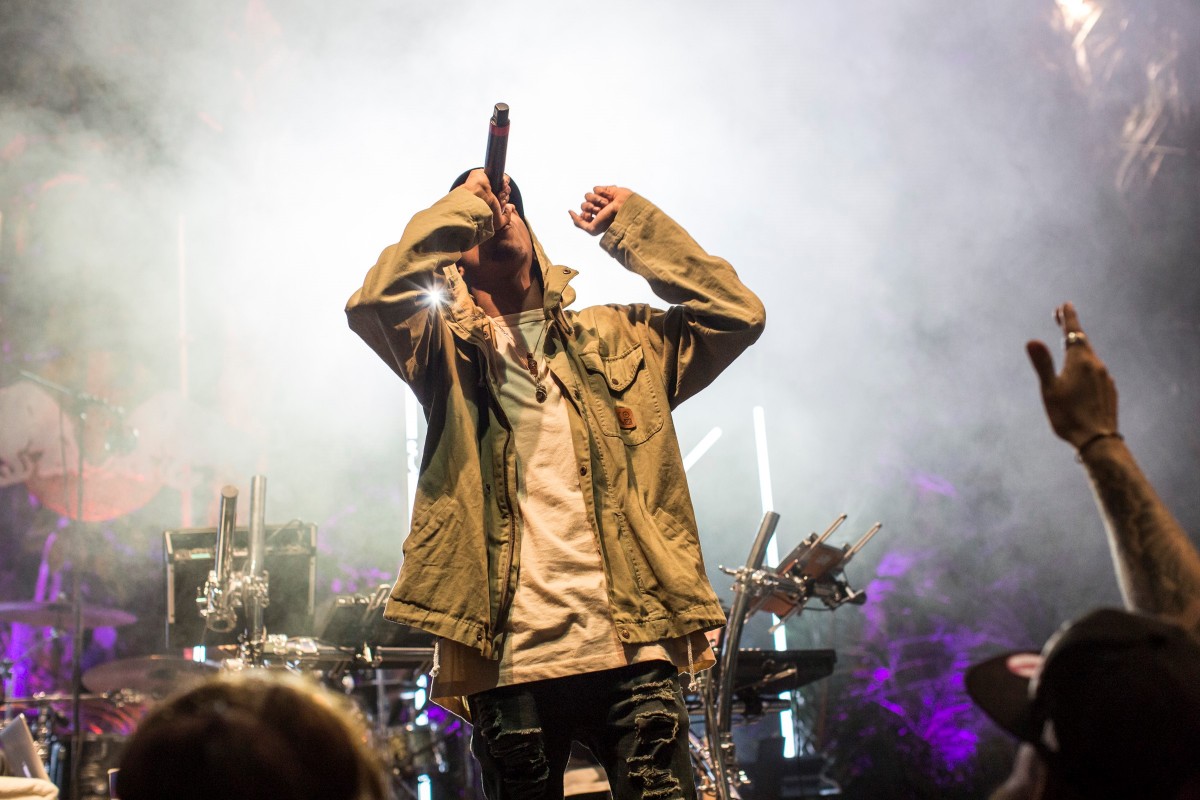 Both have his trademark cool sound, previously described on Getintothis as ‘completely understated…..slick and easily listenable‘.

Is this an assessment that he agrees with?

“Yeh, that’s right, a lot of my music is chilled, based on my influences. My natural inclination is to go for things that are more mellow.

“I think you can get pigeonholed if you come straight out with bangers so I wanted to get a bit more relaxed first. Sometimes you’ve just heard the bangers but when you delve into someone’s work a little deeper you find a more artistic side you didn’t know was there, but it’s a balance.

“I’m quite patient, I’m in it for the long haul. I’d rather have a hundred people that really care about a tune than a thousand who are a bit iffy.”

Indigo has a delightful violin sample running through it, which floats above shuffling percussion and a repeated keyboard motif to quietly hypnotic effect. I ask him where he found it and he cites a Chinese martial arts movie called Hero of which the violin was part of the soundtrack, an interesting source and one that is indicative of the openness to experimentation and diverse influence that Suedebrown displays throughout our conversation. Like The Subway In Harlem is a remix of Destiny’s Child’s ‘Soldier’, a subtle reworking which features a beautifully laid back instrumental fade out.

An EP was due for release in January 2017 but a rethink has led to the five songs being drip fed as single releases, the first of which is imminent. “Rather than drop one project with a few songs on it and have one song get picked up we thought we’d stagger it to give each song more attention”.

He hints at a change of direction with the new material, and a more danceable groove influenced by his father’s UK garage collection which he began to listen to as he hit his teens. The latest track, East revisits the Chinese martial arts theme (a constant fascination and a feature of early Wu Tang output) explored in Indigo. “I wanted to try and soundtrack a battle scene; the build-up, the marching, the combat, and translate that into something I could use when I’m playing. I’m going for orchestral grime as a sub-genre!” he laughs. 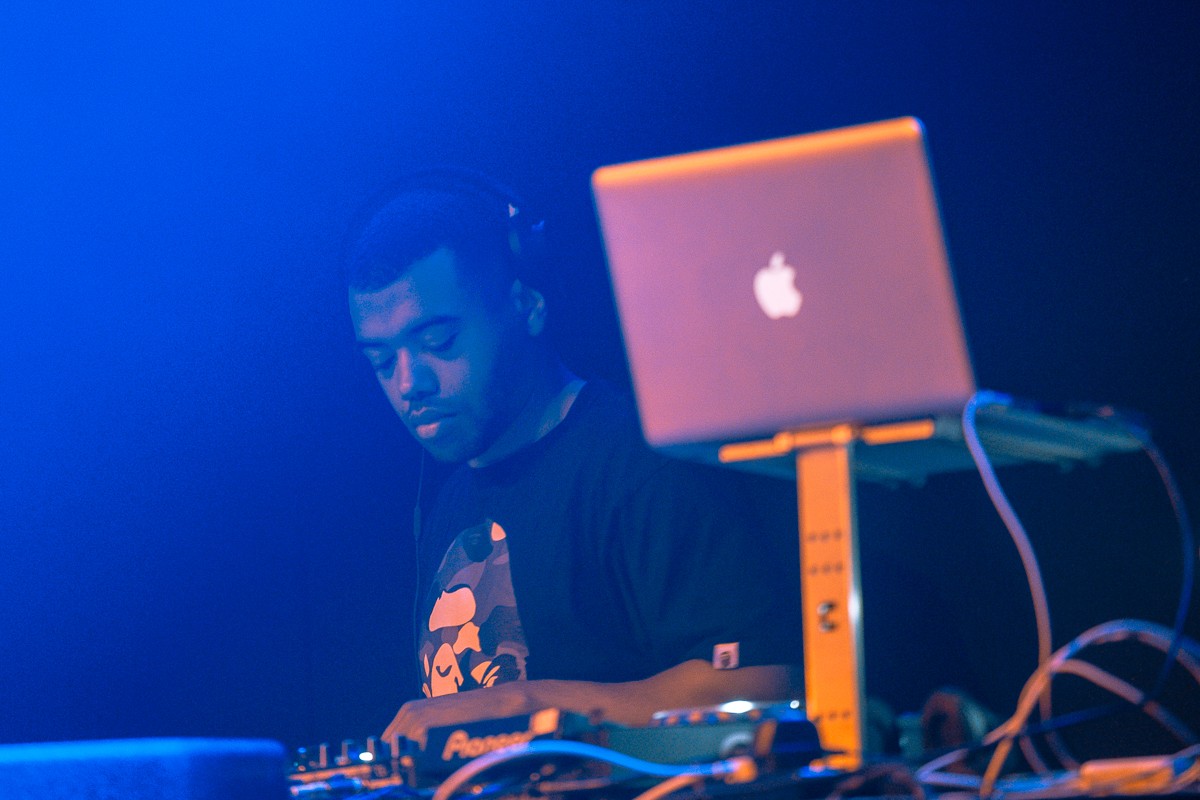 He works out ideas on a keyboard but says that he doesn’t play “to a performance standard” (although we suspect he’s being modest here) but does play on studio recordings along with session musicians. Those recordings are infiltrated with samples from a wide variety of genres; the more traditional fields of blues and jazz rubbing up against the contemporary worlds of trap, grime, hip-hop and bassline.

I ask him if he’s thought about throwing in something completely different, like a metal sample or something, and he’s totally open to the idea, “Funnily enough, I’ve always had this thing about the Kerrang channel, they’re the only music videos I watch.

“I don’t have any friends who are into it and I’ve never been fully immersed in that world but I think it’s the fact that I’m disconnected from it that makes it interesting. Xam [Volo, fellow nominee, friend and collaborator] is really into it so we might end up doing something”. Watch this space for a Suedebrown-meets-Metallica dancehall banger!

He still uses his given name, Paris, when playing residencies in clubs and really came up with the moniker Suedebrown in order to distinguish the more creative elements of his work. He credits No Fakin’ DJ Paddy Quinn, with whom he worked in a clothes store on Liverpool’s Bold Street, for giving him the impetus to forge the new identity. Quinn advised him that doing residency work and mixing/production under the same name would lead to a watering down of his identity in the minds of his potential audience and the music business.

He no longer works in the ‘rag trade’, describing himself as a ‘struggling musician’. “I’m not chasing fame. Doing the commercial DJ stuff helps to pay for the more creative side of things. If I can wake up in the morning and think ‘What does that snare drum sound like’ and pay the bills, I’m happy. I can’t switch off from it, I’ve tried to go serious and get a job but I just end up thinking about the music all day”.

The assistance he has received during his recent twelve month mentoring opportunity with the LIMF Academy has helped him to make the transition to full time musician and he is full of praise for the academy’s approach. “It’s really cool, laid back, less hands on than I thought it would be, they just email you to let you know when the next masterclass or workshop is on and you’re sharing the class with some great people like Xam and Eleanor Nelly so there’s a great melting pot of ideas. 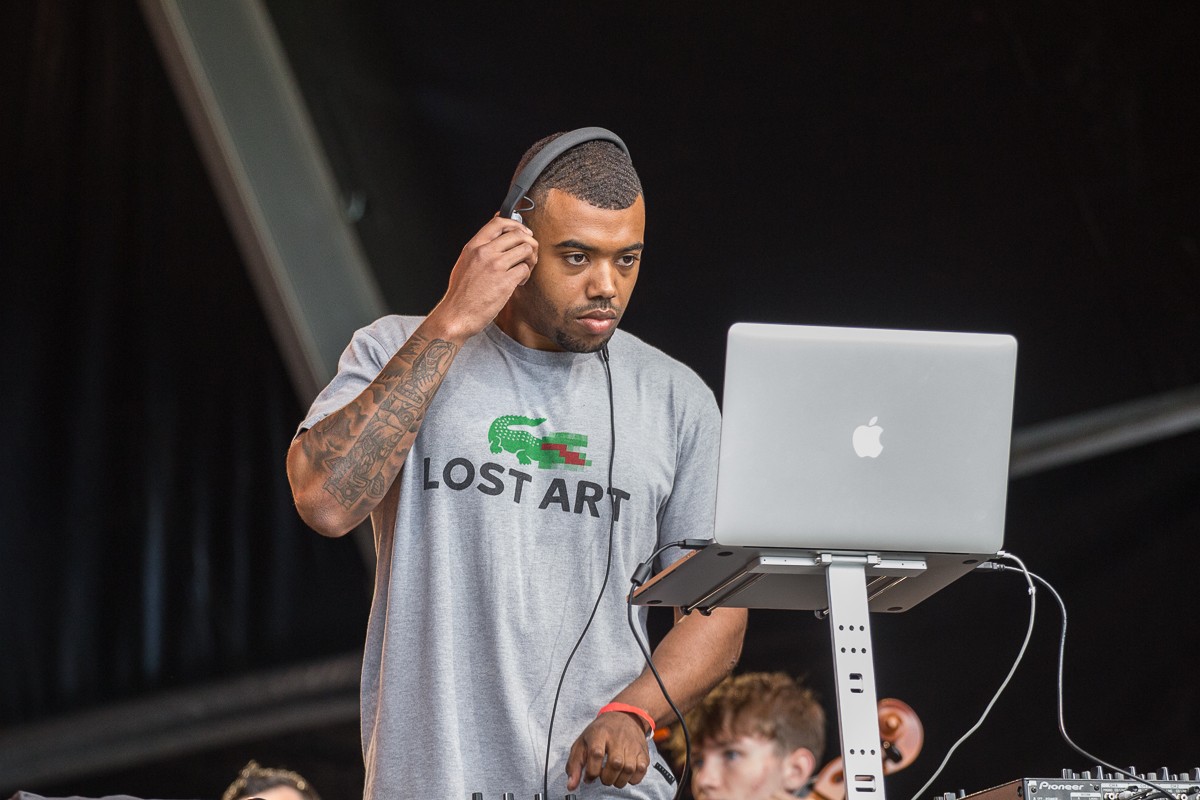 “They also give you loads of help with the promotion side of things and getting a website together so it’s been really positive and the artists think it’s a credible thing to be associated with.”

The academy also brought him into contact with genre hopping producer Steve Levine (Culture Club, The Clash, Motorhead): “that was amazing, I worked on Goddess with him, it was the first thing I did that got a bit of traction, he definitely brought a live element to it, made it more of an acoustic feel. Just walking into that studio was amazing, the best space I’ve been in in my life, the equipment is incredible, and his experience….I knew sort of what I wanted, like I want the strings to sit over here, but I couldn’t get it, stuff I’d been trying to figure out for ten years he knew in 30 seconds.

“He taught me to hear the things you can’t hear. Frequencies that operate subconsciously, sometimes they’re good, sometimes bad but if you’re not trained to hear it the track won’t be there. Production, a lot of the time it’s about taking things out. The best producers make the best songs with the least in them. A lot of the stuff I do is instrumental so I try to overcompensate for the lack of a vocal, I’ll put another two instruments in there just to try and fill that void when I don’t really need to. That’s what he taught me.”

I ask him about the GIT Award nomination. ”It was a surprise, personally it’s, what’s the word?…affirming. I’m ridiculously critical, if a song’s not going right one night it’s like, ‘I’m done with music, this is rubbish’, so this is great for me, the line-up is fantastic, just to be there on the night will be great, it’s great to be associated with those artists. So if I can keep on the radar of these people then I’m doing something right.”

What can we expect from him on the night? He thinks for a while: “I’ll probably take something well known, deconstruct it, break it down, take the beats out, maybe go a cappella, before building it up again” he muses, but we reckon we’ll just have to wait and see as the improvisational nature of that process could lead anywhere and besides, he might just decide to try something new on us, live audiences often being cast in the role of unwitting guinea pigs for Suedebrown’s latest ideas: “I can throw 30 seconds of a song I’m working on into a live mix and see how it resonates, if the vibe and the energy drops you can tell straight away, it’s like giving the audience a sneak preview and taking the response back to the studio”.

Does he suffer from nerves before a performance? “Not as much as I used to. When I did the Culture Clash thing at the O2 last summer I started playing to about 1,000 people, the biggest crowd I’d had at the time. After the third track I looked up from the decks and there were 15,000 people looking back at me, so you know, if you can do that….”

The conversation roams. We discuss the minimal funk of ESG and another idea springs forth: “I’d like to try something like that, maybe limit myself to just a few instruments and see what I can come up with”. Given his preoccupation with Chinese martial arts and movies, I ask him if he’s heard Jah Wobble‘s Chinese dub output of the late 90s, produced following Wobble’s sabbatical from the music industry when he worked on the London Underground before being drawn back into music making. 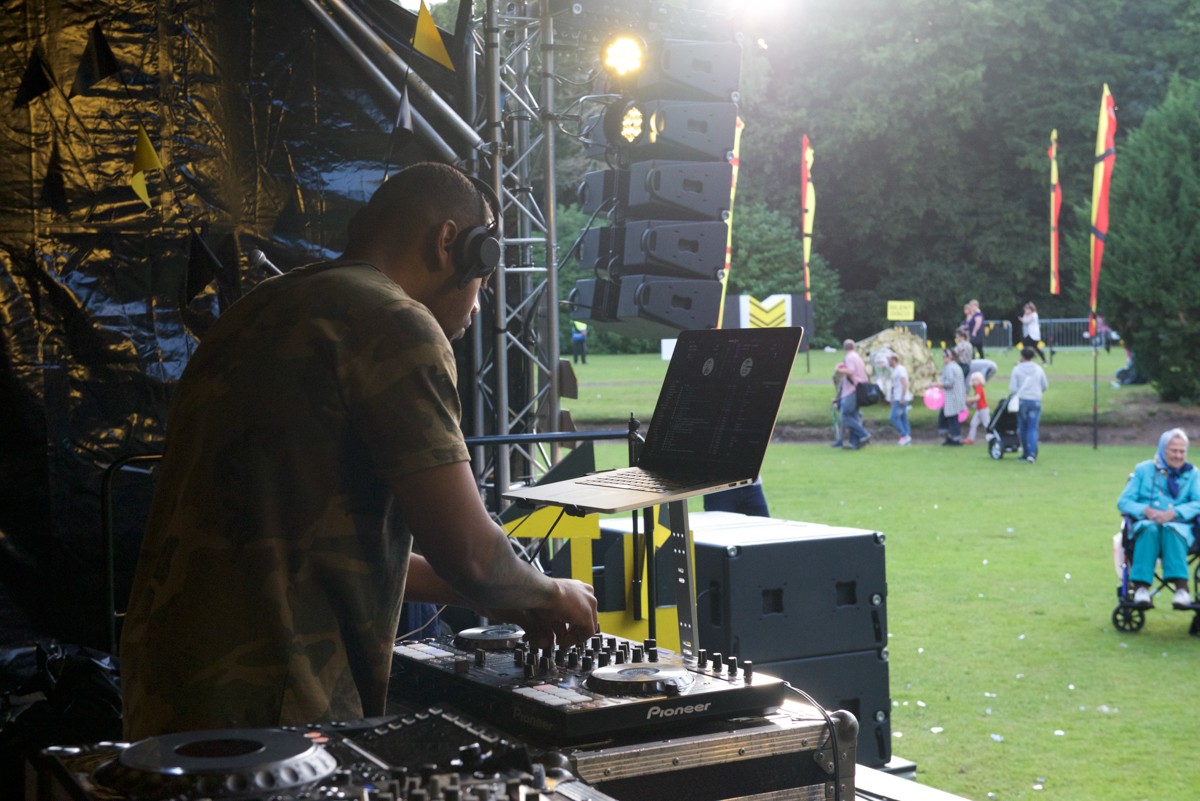 Suedebrown smiles at this. “You can’t get out” he says, pauses for thought and adds, “and I’m not even in yet”. If this latter comment is true then he is most certainly knocking persistently on the door and we think that, whatever the outcome of this year’s GIT Award, he has the quiet determination, level-headedness and, above all, passion for the music to push that door wide open.

“Where are you heading off to now?” I ask as we shake hands. “I might go down to the beach at Hale, it’s beautiful down there on a day like this…or I might do some drawing….or maybe I’ll just go back down to the studio…….”