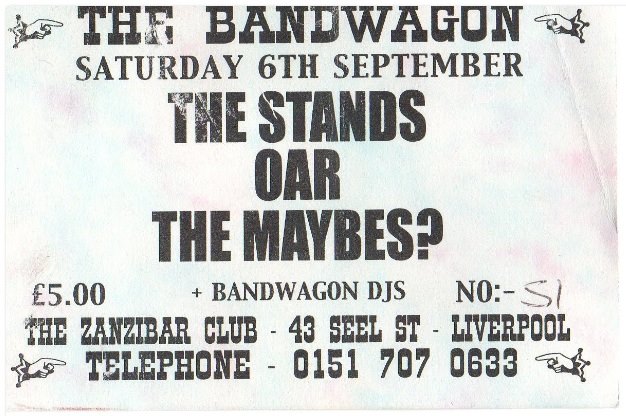 In this months Lost Liverpool, Getintothis’ Jamie Bowman recalls a time when the eyes of the musical world gazed at the formation of a new scene.

Liverpool, more than most cities, knows the importance of a good venue. The Cavern, Eric’s, Cream – writer Paul Du Noyer called them ‘the crucial three’ of the city’s music scene. They’re the catalysts. The places where three generations of fans have gathered and propelled a local scene onto the national stage.

Between 2001 and 2004, the Zanzibar on Seel Street did its best to add its name to that holy trinity and for a brief moment it really did feel that all eyes on where on this gloriously shabby corner of Liverpool city centre.

With the ever-present owner Tony Butler on the door, ‘the Zanzi’ was an unlikely place for Liverpool’s next musical revolution. Its narrow dance floor and raised seated area always gave it the look of one of those provincial nightclubs you had your first snog in, while the strange UV light system made everyone’s eyes and teeth glow. As far as I remember there were was rarely a door on the gent’s toilet.

What the Zanzibar did have was a commitment to supporting local bands and a sound system that belied its size and status. The stage was set for The Bandwagon.

‘Basically there was just a great vibe around Liverpool at the time,’ said The Bandits’ frontman John Robinson when I interviewed him in 2003.

‘It was The Coral really who exposed what was going on and hats off to them. There was an excitement back then and even if there hadn’t been the attention, I still think something would have happened because they’re all good bands. I just hope there’s room for all us.’

Robinson was referring to what became known in the media (but nowhere else) as the cosmic scouse scene: a loose collective of bands from Liverpool including The Zutons, The Stands, Tramp Attack, The Basement, The Hokum Clones and of course The Bandits.

It was The Bandits who made it their duty to provide the night which coalesced the scene and gave these bands somewhere to play.

Formed in 2000 The Bandits’ original members Gary Murphy and Tony Dunn had been a part of Tramp Attack along with soon-to-be Zutons frontman Dave McCabe.

However upon leaving Tramp Attack the two hooked up with John Robinson, Scott Dulson and Neil Crosby (drums). In 2001 the band made their mark by appearing on Beatin’ Planks– a compilation album featuring two early recordings called Take it and Run and Free Me Rain.

By 2002 the group began to search for a lead guitarist and settled on Ritchie Taylor with Neil Crosby replaced as drummer by Dave Sweeney. This completed the band’s line-up and the six musicians began to make real headway alongside their Bandwagon night which saw Robinson and Murphy promote a monthly event featuring bands and the band themselves DJing a playlist of tunes ranging from 50s rock n roll via reggae, punk and 60s psychedelia.

‘I just remember it always felt like a big house party which happened to have a proper stage, decks, a great sound system and a sound engineer in Andy Free,’ said Dulson, who began his successful DJing career at the Bandwagon.

‘It didn’t feel like a club night and there was a fairly open policy about the backstage area mainly because a good proportion of the people were either friends, friends of friends or had been coming regularly and became friends.

“The whole upstairs of the Zanzibar was the ‘dressing room’ and it usually was very, very busy. Once in the early hours of the morning, after the bands had long finished, we got a knock on the door from the doorman; ‘sorry lads.. do you mind all coming downstairs and bringing everyone? You can keep drinking and chatting but there’s 40 of you up here and about 10 downstairs!’ The main bands would rotate headlining with regular appearances for other Liverpool groups and solo acoustic players. Very quickly a scene developed and soon higher profile touring bands were eager to play with shows from Soundtrack of our Lives, The Music and, in 2004, an appearance from The Libertines.

‘We are definitely proud of it but it wasn’t a conscious plan or anything,’ said Robinson.

‘People point at the name Bandwagon and of course it’s ironic now, but I never thought about it as a wagon of bands. It was just something I’d written down and sounded good. I took the credit later!

“To come from the humble, shit beginnings of only having the mums and dads at the gigs to where we are now with packed gigs that are too hot is incredible. We used to joke about putting on the posters that you’d have to be in before 11 because they’ll be a lock out and now it kind of is true.’

‘We always prided ourselves in the diversity of the music we DJed and of the acts we put on,’ remembers Scott.

‘As well as the usual mix of our mates and their bands, we had country blues, folk, reggae, punk and rock bands. We once even had a sitar and tabla player doing Indian ragas.’

A strong imagery helped too with The Bandits utilising grainy shots of Mexican bandidos and Wild West-style posters the advertise the nights and pasting stickers everywhere they went. The club stayed open late, the bouncers were amenable and the smoking ban was yet to take effect. A good time was had by all.

Catch up with all our Lost Liverpool memories here

‘We managed to get dub reggae producer and sound system legend the Mad Professor to play,’ says Scott.

‘John and I did a reggae only set and then he came on. my memory is generally sketchy but it was very loud. At one point he announced over the mic “This is for The Bandits: they rob from the rich to give to the poor” which we liked a lot.

‘Gary was recently tour managing somewhere far flung, either Sydney or Kuala Lumpur, and he found a message for ‘Gary from the Bandits’ which the Professor had written on a backstage pass or something and left for him in the dressing room. He remembered us!’

As the NME began to focus its attentions on the band night after the both The Coral and The Zutons made headway into the singles and album charts while both The Stands and The Bandits signed record deals.

Channel 4 and their music programme 4music paid a visit and caught footage of The Stands, The Hokum Clones and The Bandits themselves joining together in a cover of Bob Dylan’s Maggie’s Farm.

On May 3, 2003, probably the most famous moment in the night’s history occurred when Noel Gallagher took to the stage and performed a gig which has gone down in history with many Oasis fans. Noel had taken an active interest in the burgeoning Scouse scene and had given The Stands several high profile support slots as well as letting The Bandits use his recording studios.

Gallagher was in Liverpool to watch Manchester City take on the Reds and was in a buoyant mood after Nicolas Anelka clinched a winner for the visitors. Prior to the gig, which he performed alongside fellow Oasis guitarist Gem Archer and part-time Oasis percussionist Terry Kirkbride,  Noel had taken the opportunity in several radio interviews to promote the greatness of the newly written song Stop the Clocks which received its first ever public airing that night and went on to feature on his debut solo record over ten years later. The other songs Noel performed, after being welcomed onto the stage by The Stand’s Howie Payne, were Talk Tonight, Wonderwall, Don’t Look Back in Anger and Married With Children, which was dedicated to Noel’s old Scouse mucker Digsy.

‘It was all total insanity, obviously it was heaving with people even though it wasn’t announced officially,’ says Dulson.

‘Gary also managed to get Lee Mavers along; in itself no easy task. Noel is a huge fan of Lee, so after the gig he went over and met him.

‘It was cool seeing someone who is arguably one of the most influential musicians of his generation and one who has no problems being himself and speaking his mind become very mild mannered and slightly in awe when finally going over and chatting to Lee, just being another music fan like all of us.

“I remember seeing them shaking hands in the corner of the dressing room and saying to Gary, ‘I think we’ll always remember this… and you made it happen!’

It all came to an end on December 16, 2004 when the last ever Bandwagon night saw The Bandits, who had split by then, reform for one last gig. The Hokum Clones and Tramp Attack were there too, dressed in Father Christmas suits and singing Jingle Bells. Everyone was there. You had to be there. Maybe you were. Goodbye.

Former Stands frontman Howie Payne has shared a track, Some Weekend Night, recorded during the Zanzibar era with additional guitar by Noel Gallagher.

The track, which features Noel on lead guitar and also inspired friends The Coral’s The Sorrow or The Song, Howie said: “We recorded it at Wheeler End, Oasis’ place – Noel played a killer solo on it, a really heavy, vicious thing.. stunning!

“Somehow, for some reason long forgotten it got lost in the mix on the record, so I’m properly happy to be able to fix that on this version. I played him the new version the other day and he was well into it.”

The track is taken from his forthcoming boxset The Stands Recordings 2003-2005, due for release June 23 on limited edition vinyl.