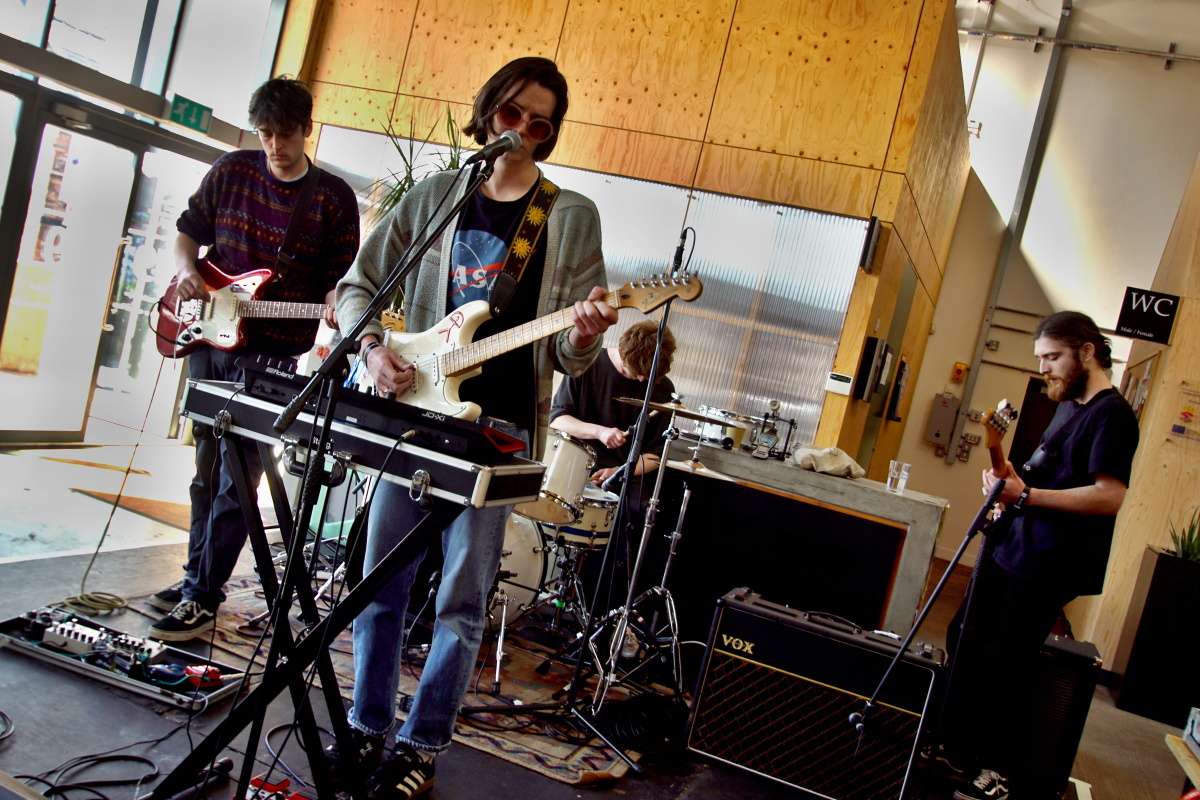 A five-star line up of the finest new sounds from around the North West are assembled for Buyers Club on August 3 – it can only mean one thing – Getintothis‘ Deep Cuts Live is back.

We’re getting the hang of these gig things now.

Yep, Getintothis‘ Deep Cuts Live events are fast becoming one of our favourite monthly happenings – and it appears word is spreading.

Last month’s offering drew a variety of record labels, North West press, an international blogger from Music, Why Not? and musicians from the likes of Hooton Tennis Club, The Tea Street Band, Zuzu and The Zutons.

Now, we’re not gonna boast, but there’s a reason for that – the music being served up really is fine, the atmosphere a right laugh and the times are guaranteed to be swell. Suppose that’s what it’s all about really…

Best one yet for me – lovely night of ace new music. Five bands, £4, incredible value. Enjoyed all especially @tvmeband and @MamatungMusic https://t.co/gZV2KdVfpu

So where we at? Episode Seven.

Taking place once again at Buyers Club (just off Hardman Street in Liverpool town centre) on Thursday August 3 from 7pm, we’re serving up our most experimental and ambitious line up to date.

Hailed by the likes of No Fakin, DJ 2 Kind and all manner of hip hop heads as the premier Liverpool rap live outfit are long-time Getintothis hype duo Beyond Average.  Long time followers of the Scouse hip hop scene will be well versed in their superlative album GMTA with Jeopardy and Big O melding fierce rhymes with the sickest of beats. Having performaed alongside icons including Ghostface, Mobb Deep, Method Man and Redman here’s your chance to see them up close and personal.

Two of Merseyside’s most intriguing new prospects from differing ends of the guitar spectrum play Deep Cuts Live #7 – Oh Well, Goodbye and The Racket share the simple fact they’re both kicking up a storm on the live circuit. Relative enigmas Oh Well, Goodbye played a blinder to this writer in the bricked up dungeon of Sound‘s basement knocking our head off with precise algebra-breaking math-rock and seismic rhythmic textures while The Racket‘s debut gig at The Zanzibar was a sell out and immediately led to them bagging a Sound City emerging spot. 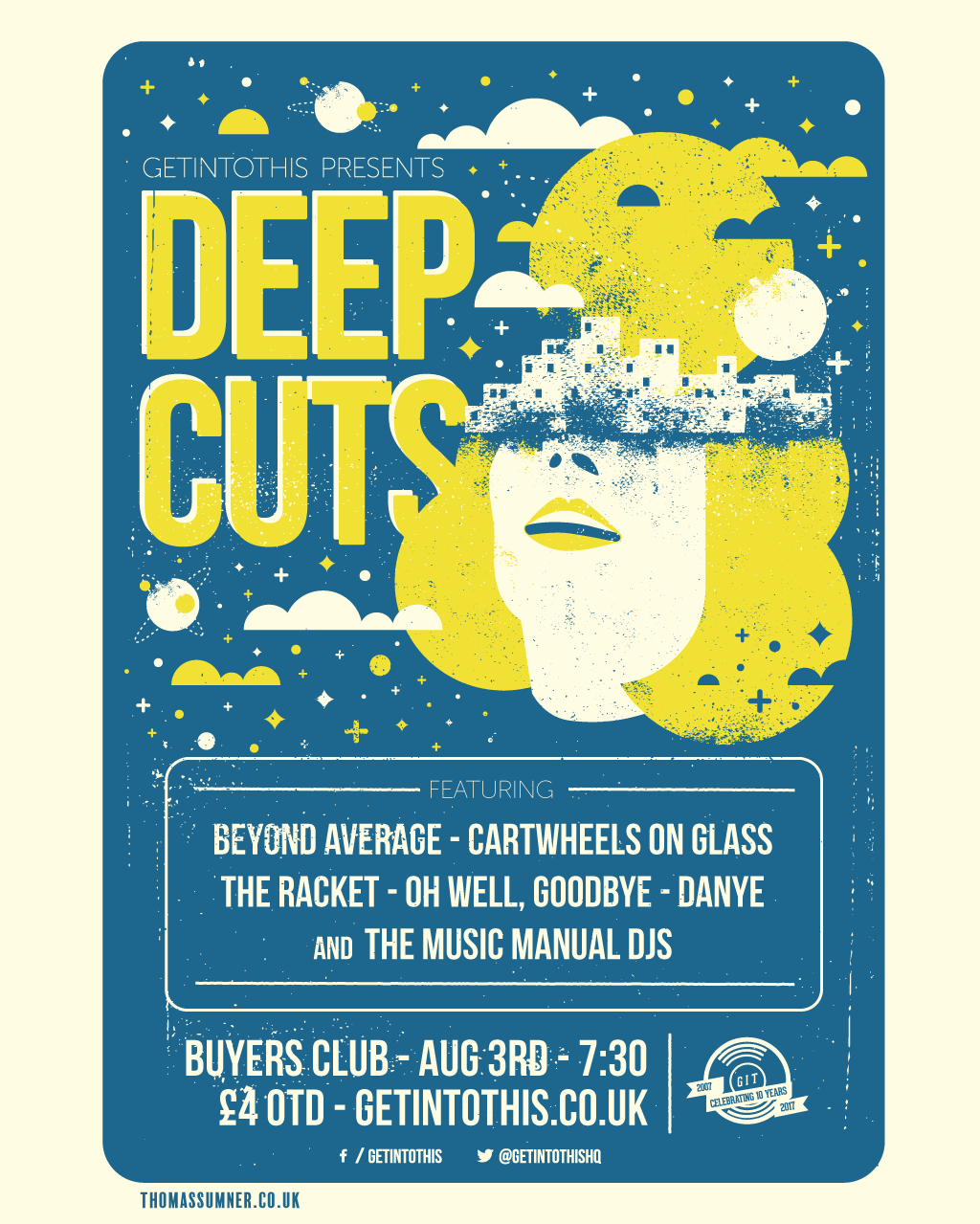 Our final two bands are at the opposite end of the spectrum in terms of where they’re at. Having emerged as firm favourites within the blooming psych-pop Mersey scene, Danye are a name gig goers will be well acquainted with. Their blend of subtle, ear-nagging echo-laden cosmic pop is ideally suited to our August Deep Cuts Live offering and will give new listeners the first chance to hear beautiful new track Happy One.

Brand spanking new to the live scene are Cartwheels On Glass. And we’re bloody spanked to have ’em on. Comprising some of the finest songwriters and live music anarchists Merseyside has to offer (Craig Sinclair from Lovecraft and Simon Gabriel from Organ Freeman to name two), Cartwheels On Glass have largely been under wraps while prepping tunes – however, the smattering we’ve heard are playful art-rock winners with a huge side portion of laconic pop. We’ll have some of that. And so should you.

In between all this action we’ve invited our pals at The Music Manual to DJ – having spent two years on the GIT Award judging panel expect finely tuned ears bursting with passion. Yes, indeed.

Here’s the line which says all that far more succinctly – and a playlist of those performing.

Finally we close with a reflection on our July Deep Cuts Live offering, here’s Amaan Khan with some choice words.

Rising Scousers The Wools kicked proceedings off with crisp songwriting recalling early melodies akin to the more pop end of The Coral before seamlessly morphing into somewhat of a rebooted Kinks complete with modern dream-pop sounds.

Following up are TV ME – who have grown visibly since we saw them at FestEvol. With their drum machine driven candy floss synth-pop their constant exchange of guitar, bass and synth aligned to quite exquisite vocal harmonies makes for beguiling listening. Best of all, their set has an apparent crescendo that perfectly comes together when they funk it up a little – the huge applause attests to a fine set – and the band know it too.

Black Pulp bring a dose of Foals-like math pop – there’s energy, ridiculous rhythms and in closer there’s a definite nod to to mid-career Mogwai – it sounds HUGE. Interlude are sound-tracked by Mellowtone DJ David McTague who mixes classic blues, Nick Drake and some reggae – it works and the vibes are indeed real swell. The uniqueness of the track selection stands out and you’re reminded of the actual point of being a selector – playing the records you are passionate about? Pints downed and the crowd swells for Mamatung – three women set adrift among dozens of musical contraptions – it reminds us of I SEE RIVERS a few months back at Deep Cuts Live.

But Mamatung are weirder, waaaay more whacked out. Their music is not for one with a fleeting attention and rightly so, they command a silence akin to a classical performance. Those who get it find themselves enraptured by the charisma of the performers. It’s great to experience how the last time we saw them they were attracting a large crowd of Sound City‘s tired attendees to dance along at the Invisible Wind Factory while this time they create an atmosphere of refreshing intimacy. Show closers Uncle Jane ooze out a certain ‘character’ that is intriguing – a kind of angst that doesn’t look pretentious. They deliver a set of garage rock that surprises you with its sheer quality, intensity and power. It all seems to end suddenly until the crowd led by the then dancing members of Mamatung ask for another tune.

The crew behind the sounddesk oblige and the band blast into an angst-ridden country punk tune. Finding a previously unknown band like Uncle Jane is such a treat – and that is what Deep Cuts Live is all about. 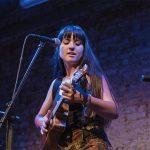 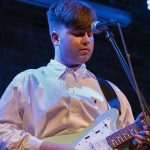 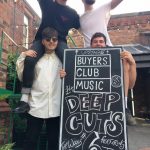 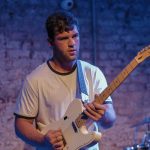 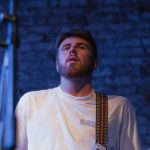 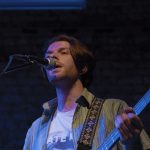 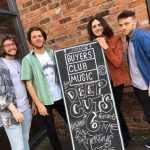 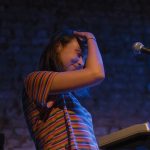 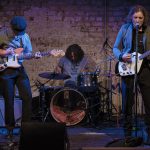 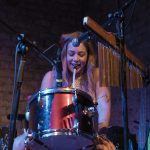 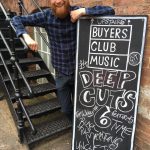 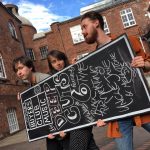 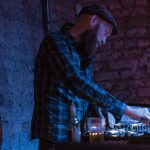 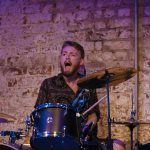 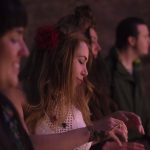 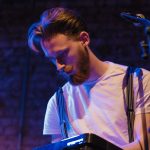 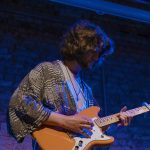 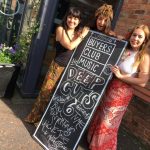 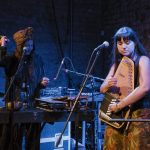 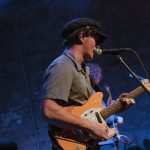 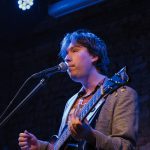 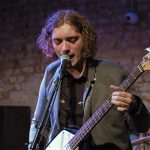