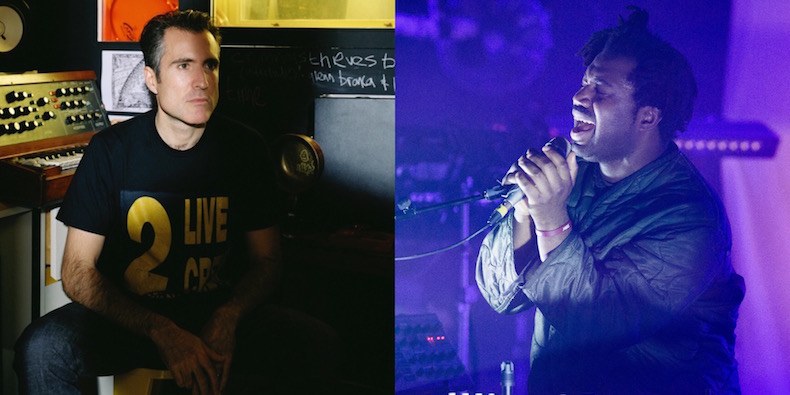 Getintothis’ Matthew Wood returns with even more hot picks including the son of a country legend, the latest release from the Odd Future clan and a cross-generation vocal combo you have to hear to believe.

Everything Is Recorded – Close But Not Quite (Feat. Sampha)

A collaborative project from the owner of XL Recordings, the production mastermind Richard Russell, Everything Is Recording invites contemporary musicians into the creative bubble aka West London Studio The Copper House.

This debut recording features contemporary artists as well as glimmers of a star-studded past with South London artist, Sampha at the forefront of this one. His irresistible vocal joins a textured intro; twinkling with chimes, with a blobby bass sound treading beneath the surface.

We’re then met with a blast from the past as Curtis Mayfield travels through the ages to meet Sampha with his chorus from The Makings Of You; seamlessly stitched into the track, his timeless vocal alongside Sampha’s is about as smooth as it gets.

Filmed in The Copper House, the music video is equally impressive; blending warped imagery, iconic photographs and footage through the ages. It’s rare you’ll find the work of so many legends in one place and it’s a joy to behold – keep your eyes peeled for Brian Eno ‘n’ all.

Not strictly a brand new single, but he’s just announced his debut album and you just have to hear this! Témé Tan was born in the Congo and has since bounced around the globe, soaking up the rich cultures and musical traditions that fascinate him so.

His music is as colourful as his passport most probably is, flowing with influence from the far corners of the earth but retaining one core energy: his lust for life. Growing up with the Congolese musical traditions and then branching out into Bossanova and sounds of the South Americas, Tan has crafted a marvellous medley that can bring a smile to anyone’s day.

Annie Hart found her feet as one third of Brooklyn dream pop outfit Au Revoir Simone, she now engineers and producers her own tracks from her basement at home, using synths and simple beats to produce pensive, often melancholy numbers that you’ll melt right into.

I Don’t Want Your Love rides along on a robotic beat while layered chords swirl and mingle producing a softened, dream-like blend that will have your thoughts drifting and your toes shifting. Stripped back and minimal, Hart demonstrates the power of clever layering and production and her debut solo record will be out for all to hear July 28.

Lukas Nelson & Promise of the Real – Find Yourself

Only the son of one of, if not the, most iconic figures in country, Willie Nelson, the boy was born to play… but can he do his papa proud? In comparison to his Dad, you could say Lukas has had it easy, heck Willie grew up during the Great Depression writing songs from a very young age, while Lukas turned to full-time musician a little later on, under much different circumstance.

He’s opened for Willie, as well as B.B.King and played alongside Neil Young which you may expect, but his latest tracks feature a figure you may not immediately associate with country genre; Find Yourself features none other than Lady Gaga.

It’s a polished, raunchy jam and wondrous vocal duet, boasting a plodding groove perfect for laying down some country soul solos and gravelly, gospel vocals. There’s perhaps more resonance of Kings Of Leon, Black Keys and Jack White as opposed to classic Willie, but this will get anyone’s foot a-stomping.

Taken from his spectacular new EP, I’m Not Alright, A Place To Drown aches with emotion, marking the point in Brill’s relationship where he’ll give every drop of his being for his lover. Think of that ghostly beauty that The Antlers encapsulated so well in Hospice, the opening piano piece is enough to break hearts and you can almost hear the crack of emotion in his vocal as we reach the chorus.

‘If you need a place to drown/ I’ll be the water for you‘, bleeds Brill, joined by some crystal female vocals and a growing, dark force of synths that plummet you to the depths of his love. Brilliantly crafted and produced, the wide expanses of this track send a tingle down your spine, and there’s even a mention of Sefton Park in there for good measure!

Comprised of members of Slow Club and The Wave Pictures, the newly formed outfit toss their former sounds aside and instead opt for a meaty garage-rock sound that’s somewhere between Black Lips and the late work of Bright Eyes’, Conor Oberst.

A rumbling drum fill charges the track while it’s a mad bluesy riff frenzy to follow, a practically relentless onslaught of squealing melodies with brief interludes of Oberst-esque vocals. Testing new waters seems to be paying of for these lads, their debut, self-titled album is due out September 1 on Moshi Moshi Records.

In run up to the new HBO mini-series Defiant Ones documenting the improbable friendship between Dr. Dre and Jimmy Iovine, the groundbreaking artist has produced a new track titled Gunfire.

Although it’s not set for official release, admittedly it cuts out prematurely but it’s still well worth a listen. The track simmers and steams with some top-end horns and a some slick verses from King Mez & Jon Connor, and of course Dre comes flying in at the midway point, sound a little croaky and no where near as deep and ballsy as he once was.

Still, as the title suggests this one’s about guns, and it’s got a poppin’ female vocal chorus to blast out to your neighbours.

Whether you can’t stand the guy, you love to hate him, or maybe you hate what he’s done to the malleable minds of spoiled teenagers, or maybe you can appreciate what one creative mind has accomplished in under a decade, whatever it may be it’s safe to say Tyler, The Creator ripped some expletives in your eardrum at some point.

The rapper/actor/director/producer/designer/all round moneymaker has built an empire around what began as a few mix-tapes and he’s back with his fourth studio album, Scum Fuck Flower Boy out July 21. Whatever Tyler creates now will garner a mass following; he could smash his head on a glockenspiel and record it and some kid in a pink GOLF hoodie with more rooms in his house that brain cells would lap it up, and all his friends too.

Of course, the Odd Future founder is no slack and his efforts since 2015’s Cherry Bomb are already apparent. He matures with every record, but what’s persistent is his attitude to life; the beats get more complex, the rhymes more eloquent, but at the end of the day he’s still gonna break a limb on his skateboard or flying headfirst off a trampoline into his swimming pool. A big kid with a big bank account, and his beats got so many of us hooked.

Aussie all-girl psych quintet Beaches announce their third record, Second Of Spring and this, their lead track is a might explosion of motorik energy and sass for you to soak up. Not to be confused with Toronto quartet, The Beaches the Melbourne girls pack a punch from the off; launching into a roaring jam of spiralling kraut and ferocious guitars.

Heavily delayed vocals occasionally pervade the sonic infusion, bouncing around the thick walls of sound as the track builds with intensity. The more you hear, the more you want to hear and it’s energetic jams like these that work so well in a live environment. No doubt there will be some limbs flailing to this one, enjoy!

Bodies of Water – Hold Me Closer

Another band snapped up by Secretly Canadian Records, Bodies Of Water began on a computer in a closet in the cramped house of newlyweds Meredith & David Metcalf. Since then they’ve released three albums alongside numerous creative endeavours and their latest Spear InThe City is due out August 25.

Hold Me Closer is a sultry jam, blending beautiful baroque elements and triumphant vocals for a sound that recalls that mystical early period of Arcade Fire’s career as well as the encompassing work of Serge Gainsbourg.

Emerging out of the vibrant, historical city of Vienna, Inner Tongue began as a potential heartbreaking story, particularly for a musician. A rare problem with his vocal chords threatened his career as a vocalist, but after some high-end treatment his voice was saved, and it would have been quite a loss as you’ll hear upon your first listen.

His music bridges gaps between many genres, his vocal soars in the same way Kevin Parker’s does, and he’s definitely a fan of the psychedelic infusions crafted by the Aussie genius. Tight drum beats, colourful grooves and synths so velvety you you just want to sink right into them.

Take a few glimmers of the prominent Vienna electronic scene and you’ve got kaleidoscopic pop with swathes of juicy influence. He’s certainly one for digging as deep as possible and piling his findings into his sound, and we can expect his debut album early next year – keep ’em peeled.