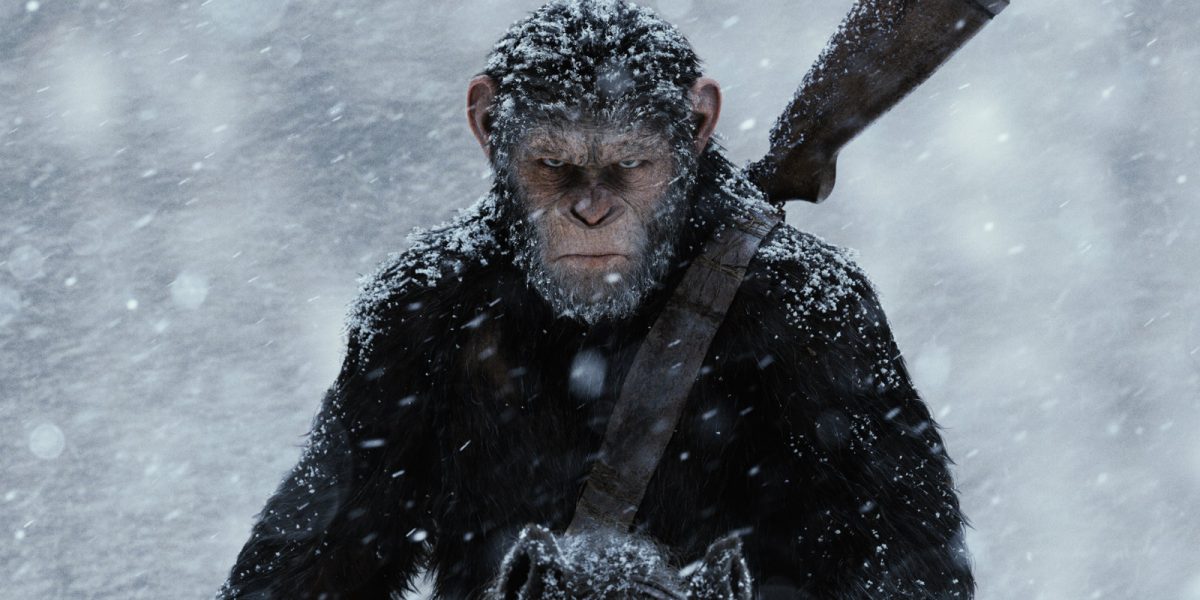 Andy Serkis- War For Planet of the Apes

Planet of the Apes franchise is back once again, Getintothis Luke Chandley swings into action on review duties

It’s a rare thing, getting to the final third of a trilogy and still being interested, Planet of the Apes is that rarity.

In general, the longer stories go on, the worse they get. The horror genre is pretty bad for that type of thing. And whilst horror is quite the niche – with fans generally enjoying scares and gore punctured with the odd interesting plot – making it through two films with a studio whilst still holding critical acclaim doesn’t happen often (I’m looking at you Pirates of the Caribbean). That’s why War for the Planet of the Apes is such an interesting case.

In case you missed out, the first two films – Rise of the Planet of the Apes and Dawn of the Planet of the Apes – were great. In a story that always seemed easier to get wrong than to ever imagine getting right – portraying a world where apes had evolved to lead a revolution against their human counterparts – the team behind these films have mixed great acting (Andy Serkis as Caesar the ape), an interesting story and most of all, the grim reality of the world they portrayed, fantastically. Leading up to the final chapter of this apocalyptic thriller, a lot was on the line. We were very close to the perfect three.

War for the Planet of the Apes starts with a brief low-down on what had come before: man was on the edge of extinction whilst the apes has colonised the forest. But in more words. These words prove important, as the hype behind this film has overpowered that of the previous films. There will be people who have only just joined the ride.

Luckily for these people, the film will suit them as much as us – the Apes fan. This approachability doesn’t lead to dumbing down of ideas, acting, or plot though, and this is the most important point.

All talk from post-production was of excellent performances and genuine excitement. Excitement in mainstream film often means increasing the explosions and speeding things up. Matt Reeves, the film’s director, avoids this well.

Theory: most films produced to blockbuster crowds are made to thrill visually, and ideas are no longer paramount. But to make the best films – classic films – you need pace. Rushing through scene after scene may thrill, but where does the emotion come from? You only need to look at classic films that have been developed further, years later, to understand. The original Star Wars, Alien and even Terminator all pace themselves. Slowing down the film to allows you to settle on a character. To feel for them. To remember their name. Years later, their remake comes during a time when studios are scared of boredom. So they speed things up, which ends in, basically, a crap, lifeless film. War for the Planet of the Apes has the right pace to feel something, and the right amount of action to mean something. It’s as brilliant as the previous two entries.

War for the Planet of the Apes takes you through the story of the end. It’s the final battle for either the humans or the apes and neither sides are without heroes. Andy Serkis is excellent as ever as Caesar, who juggles blind rage and genuine conscience very well. The moral argument that threats through this trilogy for the king of the apes is laid bare. His want to allow the apes to thrive whilst not harming human kind. But bumping into human hero The Colonel means that, finally, Caesar must fully choose a side.

The Colonel is played by Woody Harrelson. Harrelson has little to do that isn’t a grunt, snarl or nod. Visually, though, he plays the bad guy (there’s argument that he’s actually the good guy, if you’re into survival at any cost) well. He looks the part, emotes when he needs to and roars soldiers to arms.

This is a war film, make no mistake. What it isn’t, though, is action packed, and that’s for the better. War is reflected here in loss, pain and grit as much as the fighting. The few battle scenes are exhilarating, but they’re more of a bonus, as it’s the twisting agony of loss and redemption that shines brightest. But there is a major minus point: man.

This isn’t in the terms of man and ape, this is in regards to man and woman. In this film there is no speaking part for a female. Young Nova, vehicle to a surprise in the tale, is a mute young girl. Emphasis on mute. To have zero speaking part for a female in this film borders on game-changing. This is the main criticism of the film, and some might say the only criticism of the film. But it is major. In a moral tale of evolution and changing worlds, ironically this factor seems to take us back in time. Cinema needs to change. It’s 2017 for Christ sake. It’s enough to leave a very sour taste.

An honourable mention must go to newcomer to the tale, Steve Zahn. Zahn plays clumsy, vulnerable and warm Bad Ape brilliantly. This character should be left as a nice surprise, but not before stating that his involvement improves the film. the rest can be left to you.

Tying everything up nicely at the end, It would be a disappointment if we saw another film in this universe anytime soon. We have possibly just been given one of the greatest film trilogies (if not the greatest) in history with this Planet of the Apes story arc, and that doesn’t mean we should beat it until it’s dead. Allow this story to be, let the universe rest. In the war for critical acclaim this year, this film will be up there with the best. An impressive ending to the tale of human vs ape, it’s as good a banker for enjoyment as can be expected. Two big, opposable thumbs up from us.