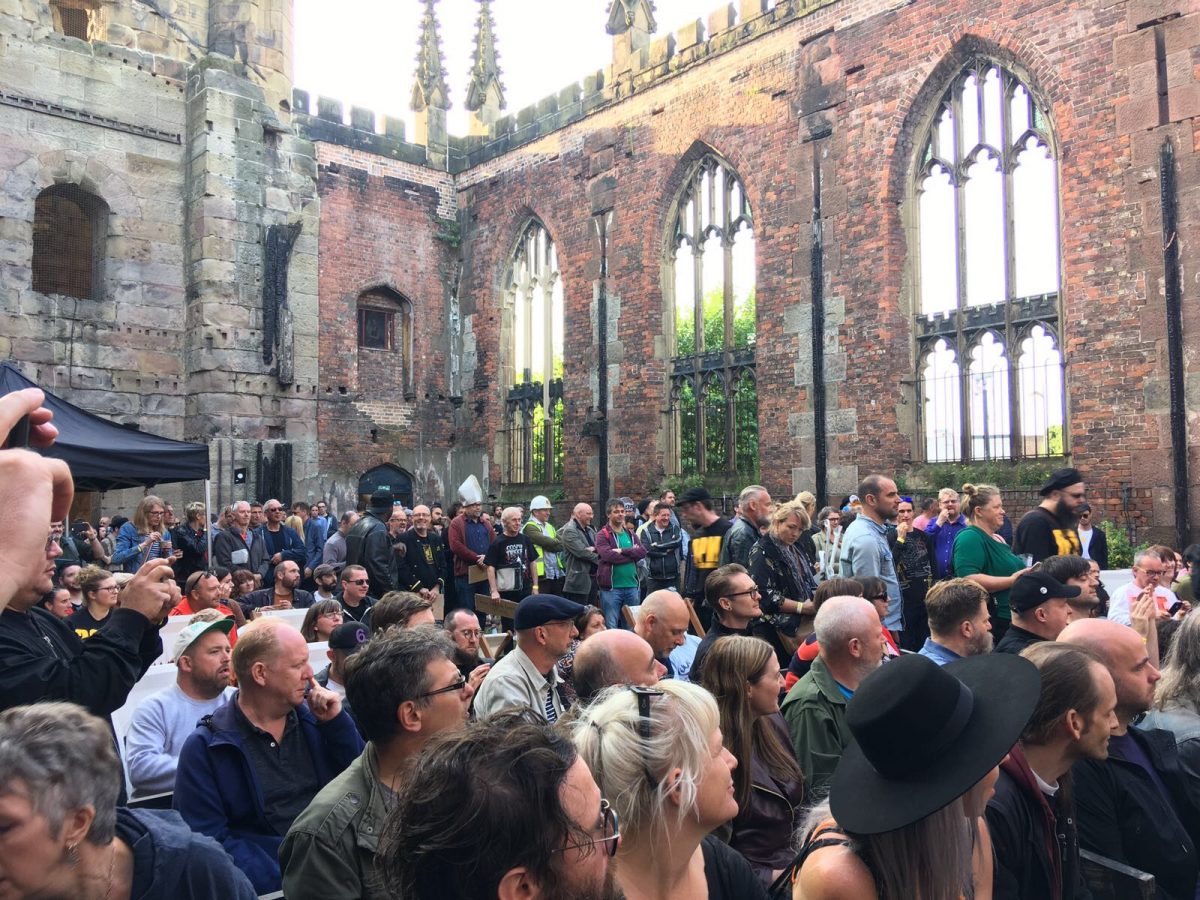 On Day 2 of the KLF’s takeover of Liverpool, Getintothis’ Gary Aster goes on a quest across the city of his own.

The day begins in the dramatic setting of St Luke’s – aka the Bombed Out Church – a well preserved and well-used, de-consecrated ruin in Liverpool’s city centre. As we enter the roof-less building we are directed either left or right by stewards assigning each of us an odd or even number. We are directed to stand in orderly, straight lines so that the high priests of Mu may pass amongst us and offer communion with greater ease.

But our communion hosts turn out to be odd or even-numbered pages torn-out by hand from brand new copies of the Jams’ current book 2023: A Trilogy. Jimmy Cauty is handing out the odd numbered pages and Bill Drummond the evens. The process takes about 10 minutes. We are then asked to identify the chapter number of our individual pages and gather together with the rest of the people from our chapter. Our task is to allow the one single page we have been allocated to stimulate our imaginations and to produce some form of creative response to, or representation of, that single page. “It might be a poem or a graffiti…you might want to make a bill poster and paste it up somewhere, for example” it is suggested to us. Really, it’s completely free. It just so happens that they’ve laid on all these materials with which you could go and create a graffiti or bill poster…

I meet up with the rest of the people with pages allocated to them from the same chapter as me. These pages really are now fully allocated to us, by the way, “for all eternity”. Our names have been noted down and we are told that they will appear in all future print runs. We are all to become footnotes in the Jams’ history quite literally. We arrange to meet again at 5 and all report back with the fruits of our labour.

The KLF in Liverpool: why did The K Foundation burn a million quid?

So I listened to my imagination for a while. Rather than read my page I figured I’d let my eyes wander over it and see which words jumped out at me. The words ‘Tangerine NiteMare’ were the first to catch my eye. I’d heard that there was a unique Tangerine NiteMare poster with an image from the book which had been pasted onto Ringo Starr’s childhood home, but I hadn’t seen it for myself.

I go for a coffee (or covfefe if you prefer) at the Dead Perch Lounge and notice that I’m drinking it from a mock-up of a Starbucks container with Yoko Ono’s face photo-shopped onto the logo and the words ‘War is Over’ printed beneath it. I’m still thinking about the poster on Madryn Street and I’ve got a job to do. Perhaps I’ll incorporate the poster in some way.

Then the idea hits me. I should remix this page – sample a few words and phrases from it, add a few more of my own and turn them into a poem. But the poetry will not lie in the words themselves, which will be random and almost meaningless. The poetry will lie in what I do with them.

3) …bring it back to the Bombed-out Church and burn it. This will serve as an act of protest against the shape of the new pound coin.

I give myself half an hour to write my nonsense poem composed by randomly plucking words that happen to rhyme from my allocated page. It is page 204. As you’ll be able to tell, it doesn’t even take me that long. Here it is (and I guarantee that despite lots of words being sampled directly from the book, it contains no spoilers):-

Get off your phone and on your high horse

Keep true to the trail and stay the course

Has a complex sexuality

No glory in a wine bar

Reynardine knows where the times goes

And which way Dylan’s wind blows

Jung’s Drums of death in a heart’s beat

I am suffering under no illusions about the literary merit of this work – it has none. I set the words out neatly on three separate pieces of paper. A trilogy. Google reckons it’s over half an hour’s walk to Madryn Street, but I’ve got long legs and I’m a fast walker. My destination is one of the Welsh Streets in Dingle, now mostly boarded-up and long un-occupied. I think the site is still visited by Beatles tourists as number 9 Madryn Street was Ringo Starr’s childhood home, but this isn’t why I’m going there. I’m going there because the words “Tangerine NiteMare”, which appear on my allocated page, first appeared on this mysterious poster which had been pasted onto this address some months ago. This is reason enough for me to stick my poem up alongside it – arguably the only appropriate, site-specific place for me to do so.

On my walk, thoughts like “what the hell are you doing?” and “what is this all for?” refuse to form fully in my mind. With the help of Google I soon find the address. It’s pretty quiet round here and the boarded-up houses inevitably bring a sullen sense to the atmosphere, although the residents I speak to don’t appear to be affected by it. I can’t help but wonder what it must be like for those still living nearby to have all these boarded-up ghosts practically next door.

Madryn Street itself is completely un-occupied and the street is unmarked. I venture down and find the Tangerine Nitemare poster, still there, but now covered in lots of Beatles fan graffiti. I realise I am not the first KLF fan to come here when I spot a ‘Wanted’ poster, putting a bounty on the head of Little Alan, a soft-toy mandrill resembling Alan Moore. I also realise I have brought nothing with which I can attach my, ahem, “poem” to the wall. I pop into Mohammed’s Corner shop and purchase a roll of parcel tape. That’ll have to do. I don’t suppose it will be there long. It doesn’t need to be. The point of this journey was not to arrive.

Job done, I take a pic on my phone and set off back to the Bombed-out Church. It’s a pleasant but uneventful stroll back through, to be frank, a fairly deprived and run-down corner of Liverpool. This isn’t what I had been expecting to do with my day at all, but I’m enjoying it so far.

At the church there are lots of people milling about. It appears as if some chapters have formed groups in order to produce collaborative responses to their pages. Occasionally Bill or Jimmy might pass by going about some task or other. The Ice Cream Van’s here and Jimmy’s tinkering with it. Bill will be making soup later. But elsewhere there is growing evidence of people’s individual and joint creative efforts. Sculptures, sketches, songs and memes amongst many other things are all underway.

My own self-appointed task is as yet incomplete. I have two more jobs to do. After lunch I venture out to Flanagan’s Apple at the bottom of Mathew Street. This building was once home to the Liverpool School of Language, Music Dream and Pun. It also housed the Science Fiction Theatre of Liverpool and was the venue for the epic production of the Illuminatus Trilogy on which Bill Drummond worked as a set designer many years ago. Nearby is a manhole cover which has assumed not-near-but-actual legendary status, despite being both moved and replaced in recent years. But that’s another story.

My job here is to recite my poem to a statue of Carl Jung which is set into an alcove of the outer wall of Flanagan’s. I can’t do it. It’s a busy street. There are people walking up and down constantly. They’re going to think I’m a nutter and perhaps they’d be right to. I consider leaving my paper copy of the poem in the statue’s alcove, but if I do that then I can’t complete task 3. I settle for reading it in my mind and directing my thoughts to Jung while standing on the manhole cover and head back to the bombed-out church.

Somewhat incongruously, in the centre of the church there is a pond. On a small island at its centre sits a statue of the Buddha flanked by a rubber duck and a pot of jam. This seems the natural place for me to perform job 3. Here I will burn my only surviving paper-copy of my “poem” in protest against the shape of the new pound coin. I don’t actually say this to anyone or anything like that, I just quickly burn the piece of paper and stroll off, but I reckon it was heavily implied.

I’m heading for the altar, on which there lies a book to be completed by all volunteers providing brief details of their creative efforts. I somehow manage to condense the above text into 3 or 4 sentences and hurriedly write them down.

I wander around to get a flavour of what others have been up to. There’s a lady who appears to have composed a short piece for the cello. The church is decorated with feminist bunting; each separate flag asserts a different woman’s right. There are sculptures, there are posters, and there are poems and diary entries. This last one brings me to Winston, a fellow volunteer whose page number was in the same chapter as mine. Winston tells me that he knew the late Ricardo Da Force, the singer and rapper who appeared on many KLF hits. Some of the words on Winston’s allocated page had brought Ricardo’s death to mind and his response was a sincere, heart-felt and plain-spoken reflection on grief and loss.

I felt strangely moved to read of how others had filled-up their day and exercised their creativity in the Jams Liverpool online facebook group. One allocated page had been placed on the grave of Robert Tressell “in the shadow of Walton Jail”, and others had taken engravings from gravestones onto their pages. Most moving of all for me personally was the chap who had fashioned himself a hat made from the sleeve of a 2nd hand Tammy Wynette record.

Bill and Jimmy are still milling about. I have some soup from Bill and the volunteers’ soup kitchen, pop out to take a few snaps of the Ice Cream Van in daylight and head home. There’s a Moody Boy Tony Thorpe DJ set I’m missing out on at the Dead Perch Lounge, but I’m knackered and tomorrow is the big day; the grand finale – The Rites of Mumufication, The Great Pull North and the Graduation Ball. Can’t wait. 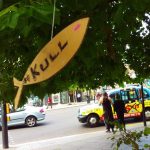 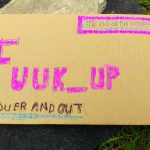 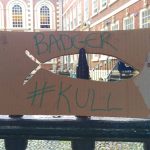 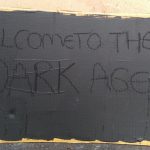 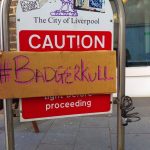 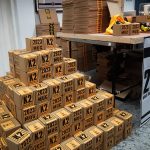 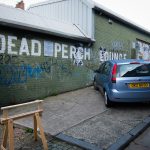 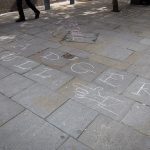 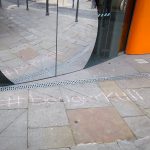 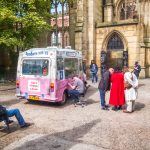 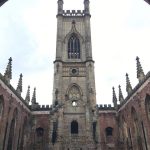 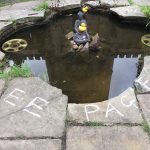 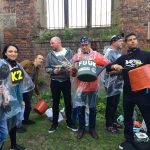 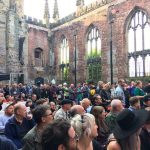 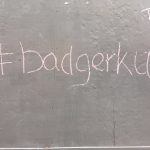 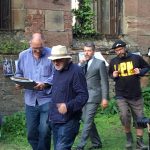 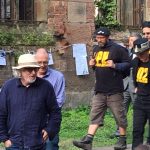 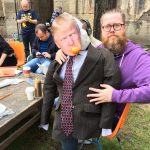 23 balloons float into the sky over The Bombed Out Church #klf pic.twitter.com/xXIbqzQLSe