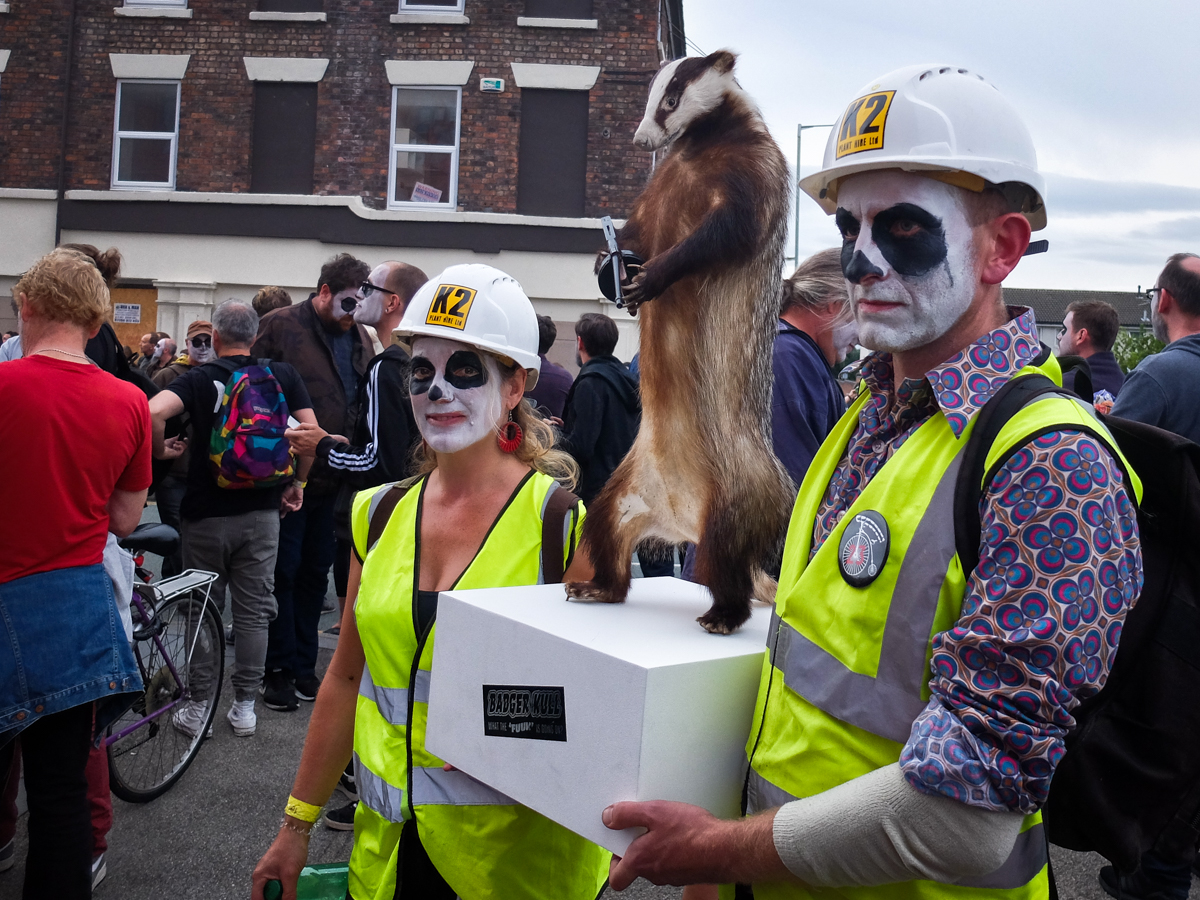 Day three of The KLF shenaningans in Liverpool leave Getintothis’ Gary Aster happy but bewildered as to what was going on.

Activities begin a little later today. Most of us are to assemble at the Florrie for 4:30, save for some volunteers whose jobs require them to arrive a little earlier.

I get there on time at half four. The Ice Cream Van is parked outside but this isn’t the first thing I notice. There are lots of people milling about. They are all wearing make-up. Well, I say make-up (and indeed it is make-up) but stage make-up.

Everyone’s face resembles a crude skull akin to those worn by participants of a Day of the Dead parade. This is the very first time throughout these whole proceedings when I can honestly say to myself “Yeah, I was expecting that.”

So I head inside and am almost immediately directed to a table where a volunteer is painting everyone’s face in all-over white. I am then directed to a second table where another volunteer sits me down and applies a deep black around my eyes to give the impression, of course, of the eye sockets of a human skull.

However, due to the surprising and let’s be frank, completely undeserved success of Badger Kull everyone I speak to at first seems to believe we are being made-up to resemble badgers. You reckon? Funny looking badgers if you ask me.

One bloke even laughingly tells me that some local kids asked him why everyone was in panda make-up. “Ha!” I said “we’re not pandas, we’re badgers!” No, no we’re not. We are skulls. These faces are death masks. We are walking memento mori.

How was this not obvious? Loads of the volunteers who said they were good at drawing have been appointed to the role of “skull-painter.” Badger Kull’s song, which they will perform tonight, is entitled ‘Toxteth Day of the Dead’.

And here we all are arriving at a venue in Toxteth and yet loads of people seem to think it’s the day of the badger.

Badger Kull, for those who may not know, is simply a group composed of volunteers.

I don’t mean to go on about this misconception, but I think it exemplifies something about this whole affair. The situation seems to be designed to derail itself and throw up these chaotic confusions. “A lot can go wrong in 72 hours” we were told at the outset.

Leaving that aside, the business of having everyone’s face-painted does help to break the ice and there’s a friendly and amiable atmosphere in and around the Florrie. Everyone’s very chatty and in seemingly good-spirits, which is just as well because things are a bit late getting underway. Then, when they do get underway they’re swiftly halted again by a persistent fire alarm.

Finally we trudge into the main hall of the Florrie and take our seats.

Three vertical screens in portrait aspect dominate the stage we are all facing. On our seats, hymn books with the (slightly altered) lyrics of ‘Justified and Ancient’ are within. The screens burst into life, accompanied by an ambient/industrial soundtrack that really makes the room shudder and rumble. It’s the 2023 Triptych Film. I won’t attempt to review it here but I will say that it’s a pretty dark piece.

And it prominently features quite a bit of skull imagery…

Then something even more sombre gets underway. A lecture from Callender and Callender (undertakers), which, with a bit of poetic or artistic licence concludes “do not be afraid we are already dead”.

Indeed we are instructed to stand up and sing these words as a repeated refrain, as if we were all assembled in a church again, this time during a funeral service, but a really fucking weird one.

The KLF in Liverpool: why did the K Foundation burn a million quid?

Soon a robed and hooded figure emerges. It’s only Jarvis Cocker, here to give a rendition of Justified and Ancient accompanied by an organist and a choir of volunteers in Mu Mu robes. As Jarvis sings, more volunteers enter from the back of the room in procession, they bring with them decorated skulls (seriously, does anyone still think we were supposed to be badgers?) and two coffins.

Some carry traffic cones, but on their heads as helmets. They join Jarvis and the choir singing the repeated refrain “all bound for Mu Mu land” and march out together singing in procession. It seems clear that we must all now follow them, out of the Florrie and into the streets still in procession, some of us still singing.

The Rites of Mumufication are underway. We’ve heard the sermon, sung our hymns and now we must walk in holy procession.

The Great Pull North awaits us. The Ice Cream Van is outside ready to be pulled through the streets by rotating groups of volunteers. Inside sit Drummond and Cauty, the Justified Ancients of Mu Mu.

400 people, with skull faces led by a bagpiper. Other volunteers hold aloft a banner heralding ‘Toxteth Day of the Dead’. There are bishops of Mu in orange robes with traffic cone helmets, flanked by volunteers pushing shopping trolleys filled with ragwort and other weeds which are scattered before us on the ground (actually, the road) we are about to tread upon.

Some have car tyres which they are rolling along with them, others too have shopping trolleys bearing stuffed animals. We are a 400-strong deathly carnival of the absurd.

It’s a 3 mile walk to the Invisible Wind Factory from here along the dock road.

We would resemble a riotous rabble were it not for the huge amount of fun everyone was clearly having and the obvious good-spirits amongst the marchers. It’s a hell of a thing to see coming down the road towards you and, of course, people are peering out of their windows and then coming out onto the street to watch us go by.

After about a mile, the boot of a car parked just ahead of us is opened and boxes containing the robes of Mu are retrieved to be dished out for us to wear. There is an enthusiastic scramble to get hold of these and people hurriedly don their robes.

Actually they are yellow pack-a-macs with a distinctly monk-like hood, and the Jams logo and phrase ‘Toxteth day of the dead’ printed onto them. There seem be enough for everyone.

Of course further down the road we run into a bit of bother since a procession like this does rather stop the traffic, and it would appear that no one has cleared any of this with the authorities. The Police appear to want to halt proceedings but we’re allowed on our way probably because by this point we would cause less disruption by continuing to our destination than by turning back. [Ed – we did wonder about that]

Our destination is a large patch of empty ground opposite the Invisible Wind Factory. Empty no longer though – it contains a large pyramidal structure (23 foot high I learn later) which has evidently been prepared for a fire. The two coffins carried all the way from the Florrie are placed into the pyramid. Bill and Jimmy don their horns, take up flaming staffs and put it to the flames.

We learn more about Mumufication – much more, but this isn’t the place to go into that now. As the fire begins to fade the Invisible Wind Factory opens. Our shared ritual is at an end and we have graduated from the Dark Ages and our Graduation Ball awaits just across the road.

After the experience the 400 have just had this can only prove to be a let-down. At least it was for me I’m afraid, but I’m not disappointed.

These last few days on the whole have been remarkable in many ways, and this final day the most exhilarating and bewildering of all. This experience has been quite unlike anything else I’ve ever participated in; a unique situation. Tomorrow morning some things will be explained to us, but I think I now know where all this is leading… 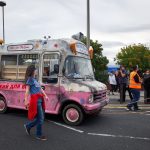 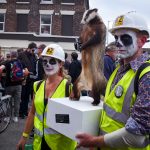 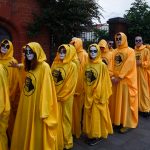 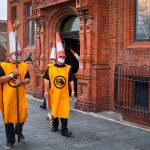 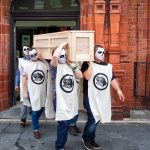 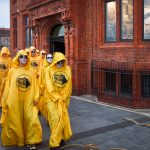 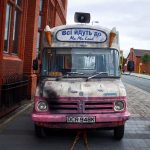 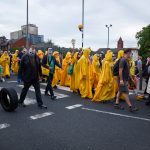 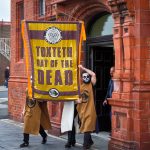 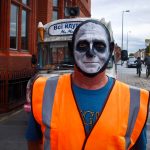 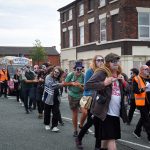 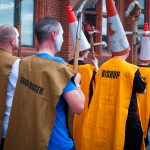 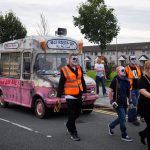 The day has arrived. Wake up now.https://t.co/NEVROZL1t1

The scene at @TheFlorrie – Jimmy Cauty fixes The Ice Cream Van, volunteers get ready to pull it & there's a Dalek. ? #JAMs #KLF pic.twitter.com/xGjado9p0o

If you're coming @TheFlorrie tonight get ready for a MASSIVE surprise. ☠️ #JAMs #KLF pic.twitter.com/1f7Wq0FX2m