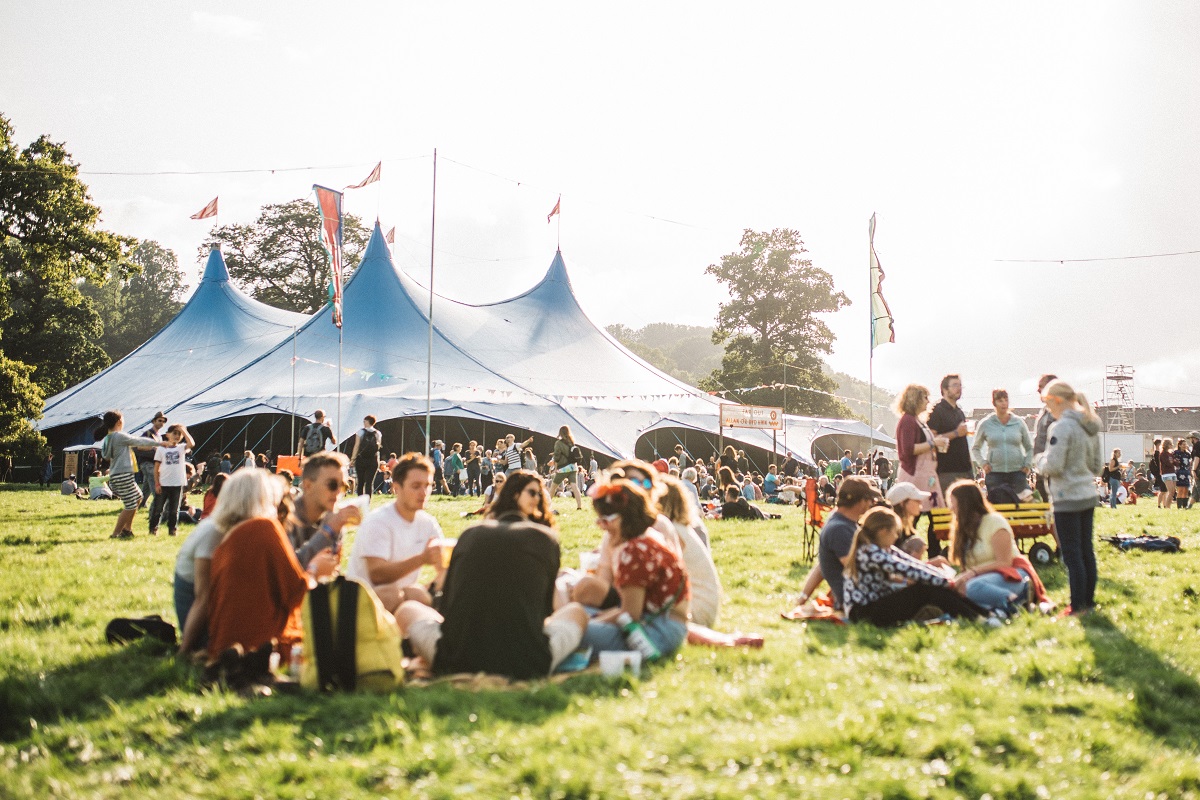 The Green Man Festival celebrates 15 years and Getintothis’ Luke Traynor was there for the party.

‘It wouldn’t be a proper Green Man without some rain,’ remarked a veteran of this festival, peering out into the grey leaden skies, on this the Brecon Beacons event’s 15th anniversary.

To be accurate, it’s only on Sunday when it bucketed down, the previous three days of sunshine infused quite nicely with generous dollops of women playing bruised acoustic guitar.

But there’s nothing vulnerable or tentative about headliners Future Islands and Ryan Adams who both impressed a very middle-class audience packed in front of the Mountain Stage with confident hooky melodies.

Adams in particular was a surprise and a revelation, hammering plain and simply “rock” into his tunes, perhaps in a bid to rid himself of the “country” tag which has remained ever since he left Whiskeytown in the late 1990s.

The previous evening, on Friday, Future Islands set the tone with Peter Hook-like bouncing basslines and Samuel Herring‘s gruff, almost leering vocals which made him, in every way, an arresting sight.

Bobbing and weaving like a boxer. scowling and clawing at his chest, it’s a tour de force performance from Herring, more animal that human, and whose dark growling vocals somehow suited Future Islands‘ clean, fresh-sounding pop.

They were matched, nonetheless, by Oxford shoegazing quartet Ride.

Filling the undercover Far Out tent with heavyweight slices of trembling guitar distortion, but (unlike My Bloody Valentine) accompanied with real discernible melodies, this was a Wall of Sound of the finest order, and an impressive way to kick off Green Man proceedings on the Thursday night.

Like many festivals however, the best music was to be found away from the Main Stage where families, children and trolleys for sleeping babies abound.

In the Far Out tent, Gospelbeach unashamedly cashed in on their West Coast folk rock roots, and Julian Cope needed only his guitar and his infectious wit to charm his Sunday early evening audience.

His bizarre chatter, and renditions of The Greatest and Perfection of Love, and in particular Sunspots, with its impression of a zooming speeding car engine, were a rare delight.

On Friday night, it was a bother that Future Islands clashed timewise with rapper-poet Kate Tempest with her acerbic social commentary on 2017 Britain, machine-gunning her way through the whole of her Let Them Eat Chaos album.

Tempest was clearly in her element, even with this extremely middle-class crowd, pointing an accusatory finger at Donald “Orange Monster” Trump, the Tories, the 2008 financial crash, “illegal” wars, to name a few hapless targets, while all the time registering her contempt for the lawmakers, at top, breakneck speed.

But the performance of the weekend went to Norwegian singer/songwriter Moddi, whose 60 minute set in the Walled Garden was as captivating as anything over four days of performances.

His folk pop was constantly charming, and his latest live musical project showed his human side, charting the fate of 12 songs banned, often for political reasons, from 12 different countries.

For those wanting a break from the music, the Babbling Tongues stage offered a mix of discussion by day and comedians by night.

Scottish Trainspotting author Irvine Welsh and left-wing activist and singer Billy Bragg drew in the biggest crowds, both men so popular that fans were prepared to stand and listen even from five rows deep outside the tent.

Bragg, on this occasion, was here to focus on the study of skiffle music, but his not infrequent turns into politics draw many impromptu rounds of applause.

He ends with a song, inviting the audience to join in with a rendition of that very English hymn Jerusalem.

It’s an unconventional way to end his 60 minutes of chat, not least because we’re in deepest Wales, and yet it’s well received and it all ended up seeming quite appropriate.

Green Man seems to have the ability cater for everyone, be that children running round the lush Mountain Stage field like a school playground, to the wine sipping brigade stationed resolutely in front of the main stage in their folding chairs, to the night owl dance fans who packed Chai Wallahs and Far Out tents until 4am.

The KLF in Liverpool:  Ice Cream Vans at midnight

Elsewhere, the Nature Nurture section of Green Man was akin to Glastonbury‘s Healing Fields, offering every conceivable type of massage, and its coup de grace, a series of outdoor frothing hot tubs.

Customers were coaxed to bathe au naturel, and some did take up the birthday suit challenge.

Green Man is undeniably pretty, the festival sitting in a Welsh valley, with the Black Mountains rising steeply at one end and the River Usk worming its way through the site.

It’s the festival’s 15th year, with a sell-out capacity of 20,000, and there were frequent reminders of the Green Man‘s resolutely sustainable ethos, like the army of green-bibbed volunteers who snaffled any sign of litter at all times of day and night, and the reusable plastic pint glasses which festival-goers were encouraged to keep using them with each trip to the bar.

At midnight, the whole festival flocked to the ceremonial burning of the Green Man, complete with a lengthy firework display, in true Wicker Man style.

But wait. Is that Edward Woodward singing The Lord’s My Shepherd inside that gradually disintegrating wooden structure? 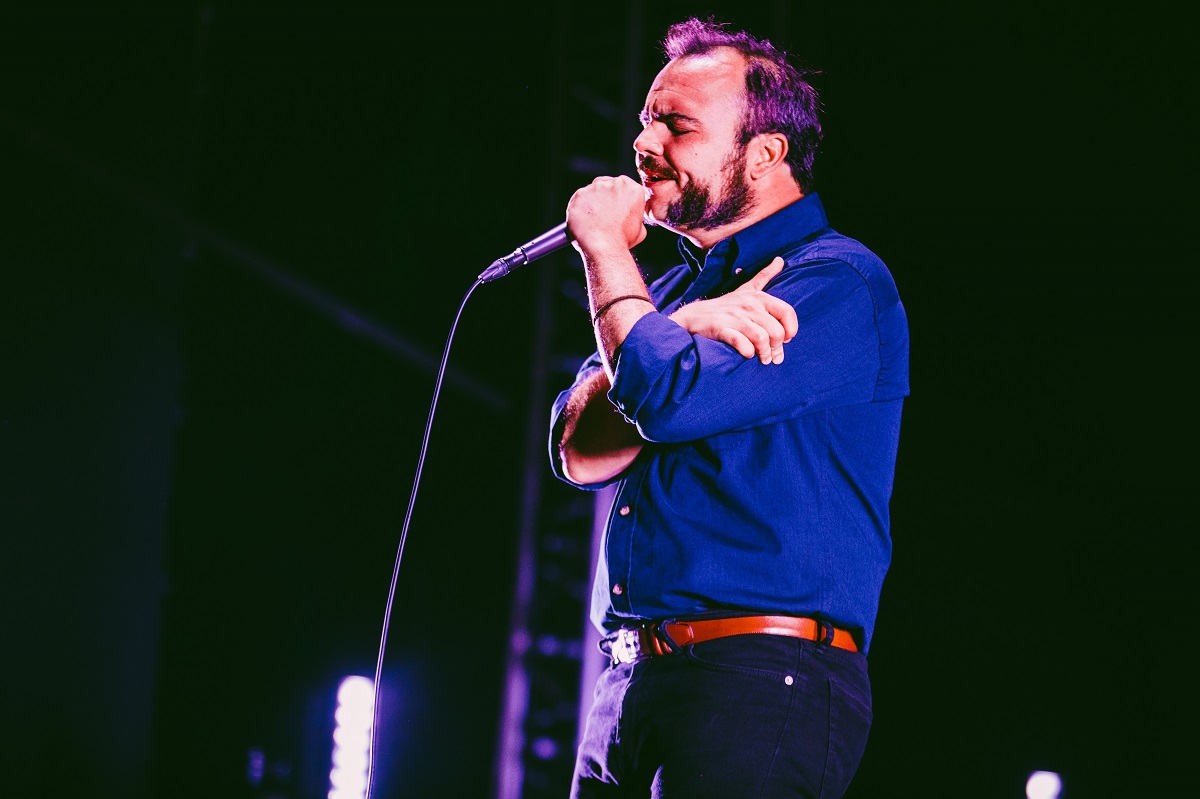 1. BadBadNotGood at the Far Out Stage

An extremely talented band of musicians that fuse experimental jazz instrumentation with various popular genres such as hip-hop and soul. Ably led and driven by a truly world class drummer in Alexander Sowinski, the band interwove mesmerising keyboard, bass guitar and saxophone timbres into a truly beguiling set. Most definitely FabFabNotDud!

2. Future Islands at the Mountain Stage

On a clear night an expectant crowd huddled close, as stage became awash with a warm glow felt by all. Electro-synth rhythms combined with thumping bass and soulful voice to produce a magical set of wondrous tunes. Samuel T. Herring’s fabulous vocal range, chest-slapping and amazing slide shapes, ensured that this night (and early morning) was completely owned by Future Islands.

3. The Orielles at the Walled Garden

Occupying first slot on the Saturday billing, The Orielles drew a decent crowd and kept its attention for the duration of their set. By the time they finished on I Only Bought It For The Bottle, their DIY-indie, bass-heavy tones were bouncing from wall to wall, with sound waves swaying an appreciative audience.

4. Lambchop at the Mountain Stage

5. Thee Oh Sees at the Far Out Stage

Frontman John Dwyer and his most recent musician collective, unleashed an unrelenting slice of manic, drum-driven, blisteringly-paced, garage rock to an anticipative crowd; reminiscent of the sound created by the MC5 at their wildest, anarchic best.

6. The Comet Is Coming at Chai Wallahs

Late night jazzy overtones with funky electronic backbeats that took us on an intergalactic journey around the cosmos … before returning us back to Planet Green Man, with a flump.

7. Shame at the Far Out Stage

On a seemingly endless tour of clubs, festivals and more clubs, South London boys, Shame delivered an energetic set of punk anthems for embittered casualties of an austerity-ravaged Britain that completely won over a wary Green Man crowd.

And to celebrate, lead singer Charlie Steen launched himself head first into a sizeable moshpit during their final song, Gold Hole.

8. Julie Byrne at the Walled Garden

There was plenty of folk music at the festival, but nothing sounded quite as perfect as this. Enchanting songs complimented with a voice of pure beauty. Hardly any audience chatter throughout  … Exactly how it should be!

9. Sleaford Mods at the Far Out Stage

On many a Green Man festival-goers’ ‘must-see’ list, Messrs. Williamson and Fearn served up an intoxicating fare of enticing beats, smoking rhymes and acerbic wit, making them worth the festival-entrance fee alone.

Jolly Fucker was particularly entertaining, and to a wide demographic, including numerous stay-up kids and chair-clutching sexagenarians. 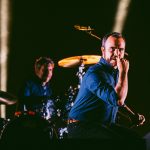 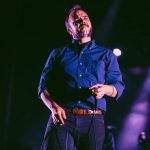 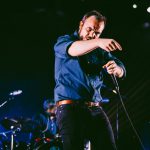 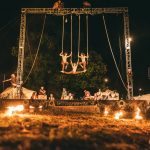 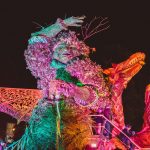 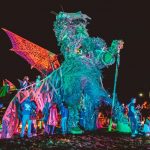 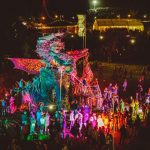 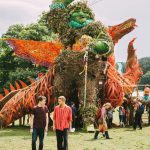 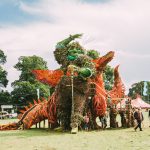 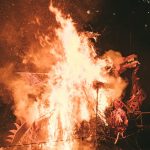 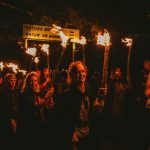 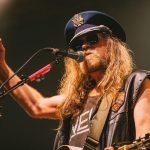 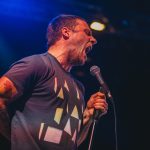 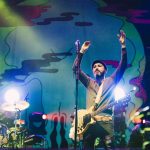 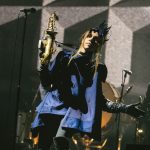 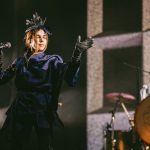 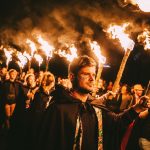 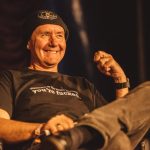 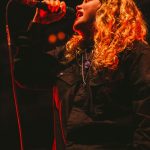 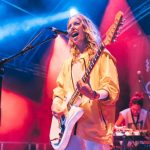 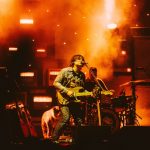 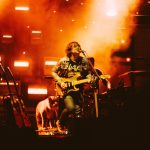