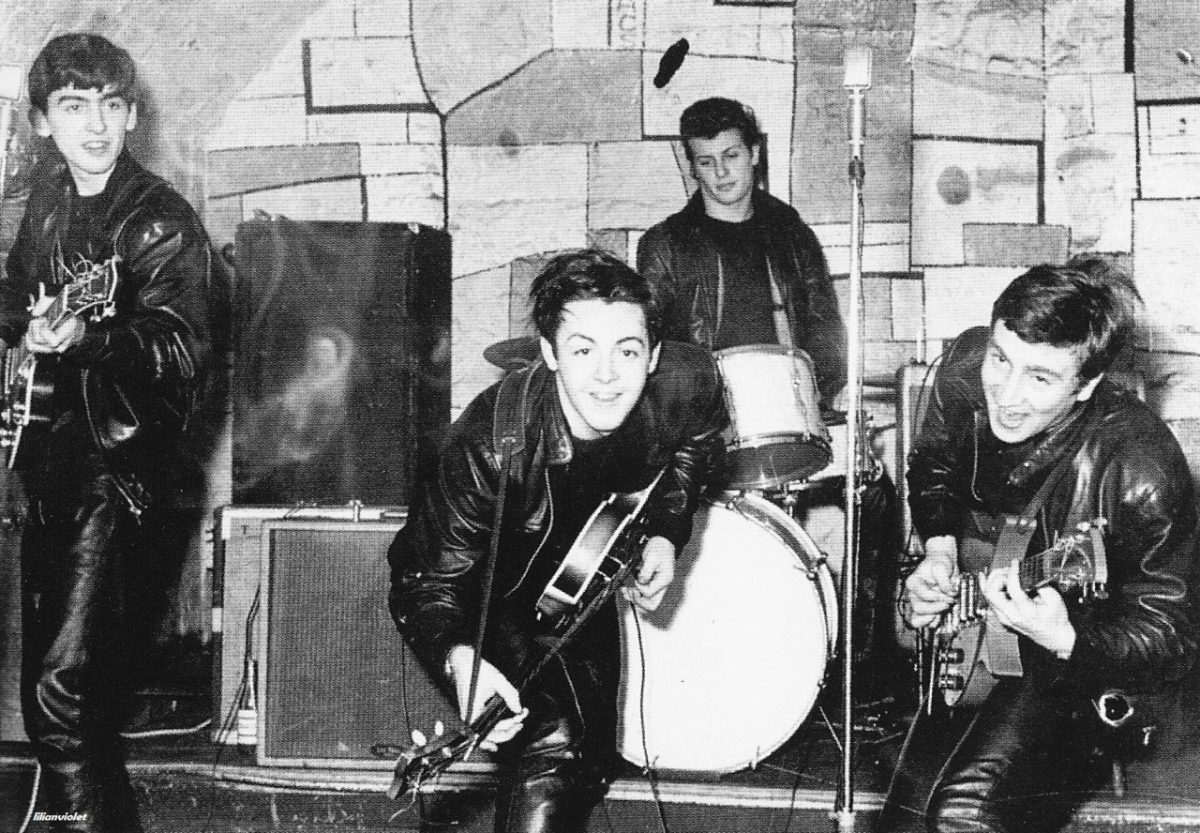 The Beatles making history in The Cavern

Examining the importance of a lesser-told tale from Liverpool’s 1980s, Getintothis’ Del Pike revisits the unsung heroes of The Cavern Mecca and witnesses the birth of Beatles tourism.

As the recent Cavern celebrations attest, January 2017 being the 60th anniversary of the legendary venue, the memory of The Beatles and the Merseybeat era that surrounded them has not gone away.

The Cavern’s upcoming Beatleweek at the end of August will once again prove this point further. So massive were The Beatles it was inevitable even during their heyday that they would still be selling music into the next century and beyond.

However there was a time in Liverpool when it felt that the whole thing was a dream and for a while, The Beatles didn’t really matter.

It takes a while to regain cult status after world domination and the long hair and beard years of The Beatles dampened the mania of their earlier years. Gone were the screaming school-kids, they had grown up, got jobs and like the band themselves, mellowed. The early 70s was a time when a lull fell over the city and music fans were looking elsewhere for their thrills.

Mathew Street, that hub of creativity lost its beloved Cavern when, in 1973, the bulldozers moved in to make way for work on the underground rail system. It was short-sighted, imagine Gracelands succumbing to the same fate. Its removal left Mathew Street without a heart, with just The Grapes pub remaining as a reminder as to where The Beatles famously drank before heading into The Cavern.

In a recent documentary by local director Paul Sudbury, Cavern Mecca: Rebirth of The Beatles, fans talk of how tourists from all over the world would still come to Liverpool to see the home of The Beatles and how they would stand bewildered on the pavement of Mathew Street looking for some evidence of their presence.

1970s opening times wouldn’t even guarantee the warmth of The Grapes, at that time the only pub on the street. 1974 saw the unveiling of local sculptor, Arthur Dooley’s tribute to The Beatles, Four Lads Who Shook the World, still there, high on the wall just by Lennon’s Bar, but the iconic Eric’s would not open until 1976.

Beatles fanatics Jim and Liz Hughes, a married couple who saw the gap that the removal of The Cavern had left, opened the Magical Mystery Store on North John Street. Selling records, posters, tee shirts and badges, it was as much a meeting place as a shop, somewhere at last that Beatles fans could come in and feel at home.

The Hugheses were a quiet unassuming couple, the most unlikely pair to be responsible for what has now developed into a full-scale industry in Liverpool, Beatles tourism. Friends are trying to this day to see the couple rewarded with some recognition for this achievement, possibly in the form of Freemen of the City but the powers that be are not biting.

In the case of Liz it would be an honorary recognition as she sadly passed away in 2008. A memorial plaque is on display upstairs in Flanagan’s Apple at the Met Quarter end of Mathew Street adorned with a photograph of the couple smiling proudly with Paul McCartney.

This upstairs space was the site of their next venture. 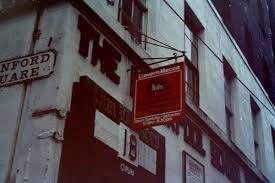 In January 1981, Jim and Liz opened Cavern Mecca. The idea was to open an official meeting place for Beatles fans and tourists. The interior was built by volunteers, friends of Jim and Liz and included a small-scale mock-up of The Cavern, a coffee bar, galleries of related artefacts, mainly from their own belongings and a fireplace in the corner that would become a haven for cold and weary travellers. The Magical Mystery Store too found its way into Cavern Mecca and the team of sales assistants would become welcome faces to the many regular visitors.

The opening of the centre was brought forward to just after the New Year as hordes of fans had gathered in the city to mourn the loss of John Lennon who was murdered in New York the previous month. They still had nowhere to gather and Cavern Mecca was an unfinished but a perfect shelter. An actual mecca.

In October 1977 former Beatles manager, the recently deceased Allan Williams, along with original Cavern Club DJ Bob Wooler, organised the first Beatles conventions in the long closed Pickwicks club. It was a low key and suitably shabby affair, that allegedly included an impromptu stripping-off race instigated by Allan with a ten-pound prize. It was a start and the idea showed potential.

Clearly there was a need for such events. In 1981 after further attempts to organise a regular event, Jim and Liz took over and organised the first official MerseyBeatle Extravaganza at The Royal Court Theatre. Later conventions at The Adelphi Hotel would prove massively popular and kick-started the annual celebrations that Cavern City Tours continue to organise to this day. 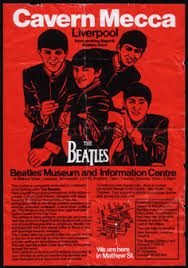 I was a part of this scene, first visiting the Cavern Mecca, or the Beatles Museum as we called it, one night after school and it was the friendliest place I had ever known. As a shy kid coming from a particularly rough school, friendly faces were a rarity, particularly from others my age. Before long I was in there every Saturday making more and more friends and for the first time feeling a part of the City scene and gaining in confidence.

The mocked up Cavern stage would play host to guest speakers and bands but mainly housed a small TV and VHS player, showing endless glorious footage of The Beatles, their films, gigs, interviews and fascinating glimpses of their solo stuff that you couldn’t see elsewhere.

We would sit for hours, only coming out for a coffee and a mess about at the counter. Being only 15 years old my main memories of Jim and Liz are being told off for making a noise and being threatened with expulsion. God help us if we were summoned to the office. We must have been a right pain in the arse.

Want Beatles? You got it…

Cavern Mecca always seemed to have a string of visitors including the actor Victor Spinetti, who had appeared in the first three Beatles films, John Lennon’s ex-wife Cynthia and Rick Buckler from The Jam. It was a great place to get autographs. A few years later when Yoko Ono would visit Liverpool with a young Sean Lennon, they were given a royal welcome from the Beatles community and were shown John Lennon’s childhood home on Menlove Avenue and the children’s home at Strawberry Field. 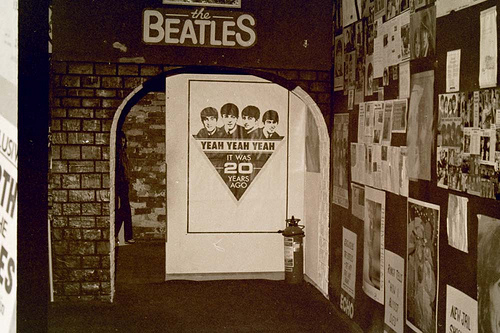 The area surrounding Cavern Mecca came alive during the time that the centre existed, and a community of Beatle people grew. There was us, the ones too young to remember but also the likes of Allan Williams and Bob Wooler, always on hand to tell tales of their involvement in creating The Beatles legend.

John Lennon’s Uncle Charlie was seemingly ever-present to give his version of events. He became a surrogate uncle to us all and was a fascinating figure with his instantly recognisable Lennon nose and train driver’s cap. Other folk such as the wonderful Pat Daniels, who had worked alongside Cilla in the Cavern Cloakroom, and former Cavern bouncer Paddy Delaney would also be regulars. All of these people have now passed away and are missed by many.

Cavern Mecca itself would create local legends, none more so than Eddie Porter. This charismatic figure who would later be known by some as The Walrus, worked at the centre and was without doubt the heart of the place. He taught me to be who I am and was a guiding light to so many of us young fans at that time, making us feel safe in what was then a potentially rough place to be.

A regular face at the bar of The Grapes and carrying on his career as a tour guide on the now iconic Magical Mystery Tour coaches, there are very few Mathew Street regulars and City dwellers who have not at some point crossed paths or shared a pint and a story with Eddie. His 1987 book Beatle People chronicled the folk who drifted in and out of the 1980s Beatles scene, I am proud to be included in Eddie’s role call of Dancing Girls and Cavern Mecca Fellas. 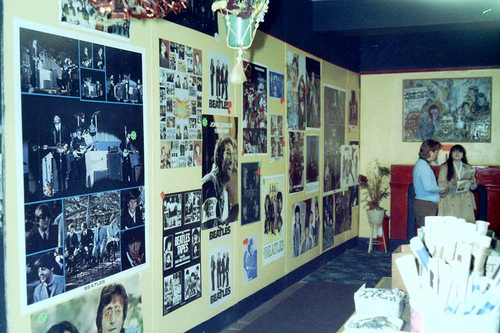 Due to health issues Jim and Liz closed Cavern Mecca in 1984, it was a heart-breaking moment for many. It re-opened briefly in the newly built Cavern Walks but the atmosphere was never the same. Gone was the musty, dusty smell of the original, it was just too clean. Regulars visited maybe once and never returned leaving just the few hardcore fans to support a venture that should never have been.

We continued to meet, all a bit older now, in Lennon’s Bar and The Grapes. The girls continued to follow Mojo Filter, a Liverpool beat band who mixed 60s classics with a few originals, who played around town, mainly at The Beaky on Victoria Street. Saturday nights would be spent religiously at the newly opened Cavern with DJ Ron Jones.

It seems strange now to think of the great Liverpool music that was being created alongside what we were doing, (Bunnymen, Teardrop, Frankie) which we didn’t really notice. Some remained on Mathew Street; others including myself, drifted away. 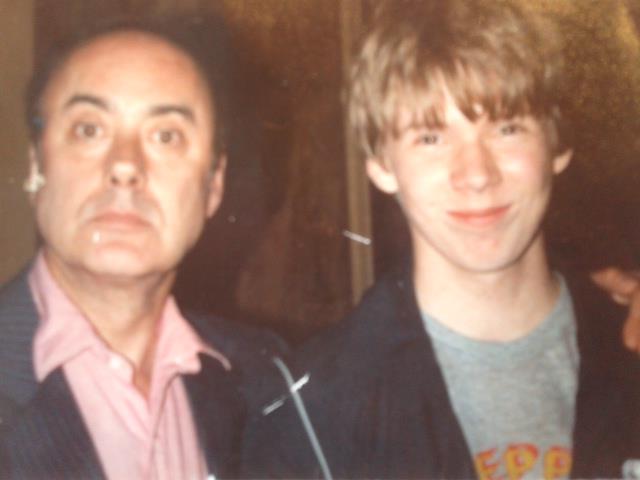 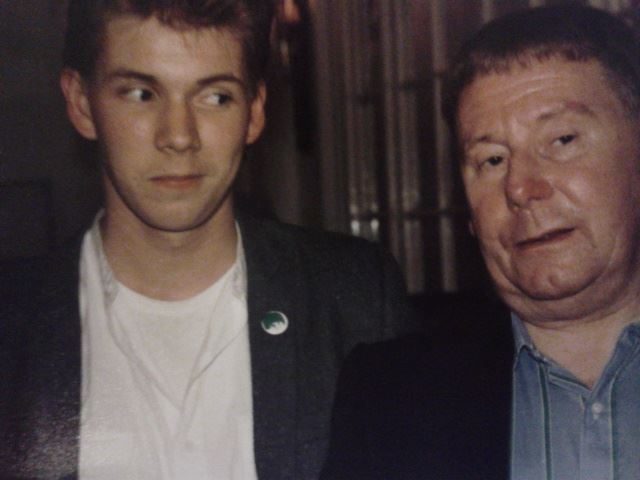 The new Cavern, as we all know, was not exactly located  in the original space and was mocked as such by many, but as the years have passed it has become as important a part of Beatles tourism as the real Cavern was to the original regulars. Acts including The Arctic Monkeys, Adele and Macca himself have graced the stage since it re-opened and it continues to attract massive crowds day and night.

The Mathew Street that exists today seems so far removed from those revivalist days of the 80s when it felt that the street belonged to us, particularly on a Saturday night when the Street is overflowing with stags and hens. It felt safe and in some ways quaint then. Hard to believe that this quiet little backstreet was where The Beatles plied their trade before heading off to conquer the world.

The seeds that were sown by Jim and Liz have bloomed into a city packed with  Beatles-themed hotels, bars, cafés, even a University. John Lennon airport ensures that travellers coming to Liverpool can enjoy The Beatles experience from the second they touch down. Mathew Street itself though has become lost in a sea of themed pubs, illuminations and noise. There are havens to be found but the Beatles element feels a lot more corporate than it once did.

There is a belief that without Jim and Liz, Beatles tourism would not have happened quite so quickly and effectively as it did. So many people owe a them debt for their creation of a magical era that would otherwise have been lost in the late 70s and through the 80s.

An annual Cavern Mecca reunion, run by long-standing regular Julie Sudbury, takes place every year in The Cavern giving us all an opportunity to relieve memories, and as our families and group of friends grow, it gets busier year on year.

The 2016 event in November included a screening at the Museum of Liverpool the following day of Paul Sudbury’s documentary, Cavern Mecca the Rebirth of The Beatles. The hour-long film successfully reflects the era and pays homage to the work of Jim and Liz Hughes.

A lot of money has been made from the legacy of The Beatles but Jim and Liz’s efforts were most definitely from the heart.