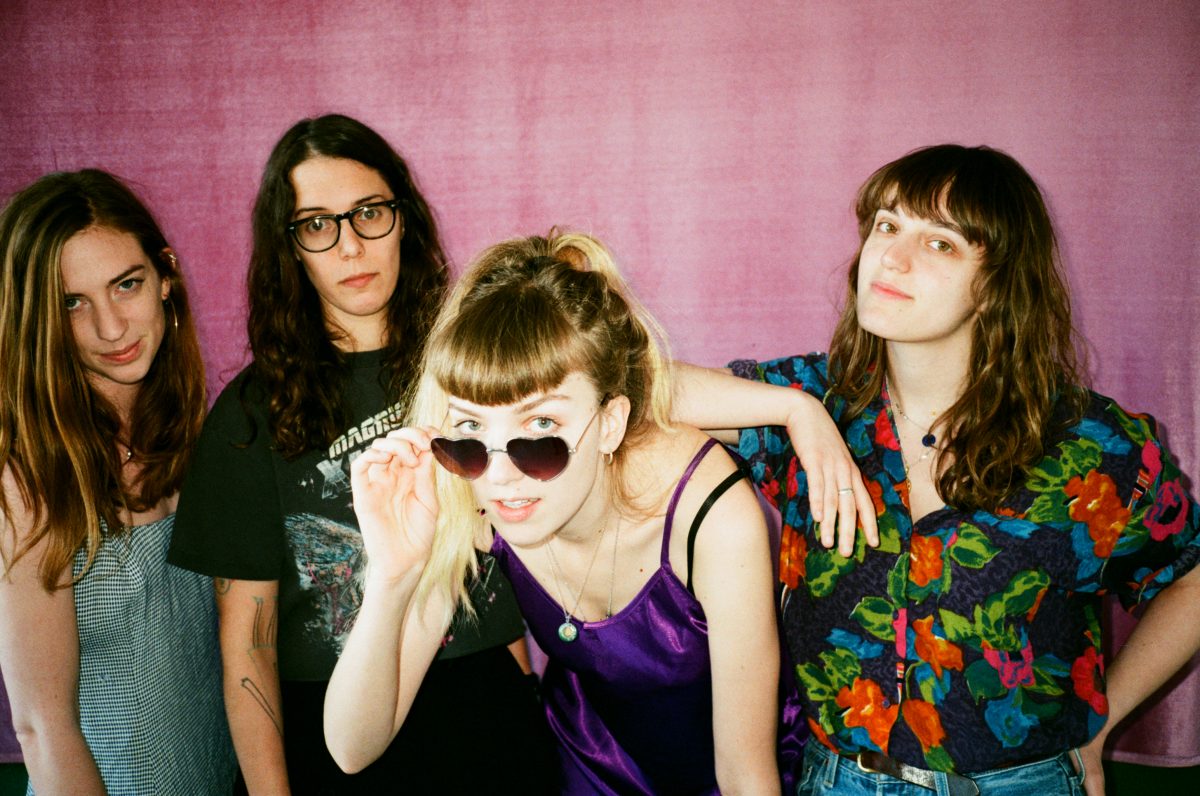 The Big Moon played the Magnet and Getintothis’ Lauren Wise caught up with them to chat about touring, backing Marika Hackman and pop.

It has been one heck of a year for The Big Moon. After their Mercury Prize album nomination, they took to touring for the majority of the year, including a pit stop at Liverpool’s The Magnet during their UK tour.

We got the chance to chat to bassist Celia Archer and drummer Fern Ford to see how the tour has been treating them, what their favourite part of being in a band is and providing backing for Marika Hackman.

Downstairs in The Magnet is a secret third bar, closed off from punters, acting as an exclusive VIP space for the headliners of the night, The Big Moon.

After a welcoming hug from bassist Celia and a quick scout around only to see a lack of available perches, there was nothing for it but a cosy interview on the floor.

Celia: “Yeah, the tour’s going really good, it’s the longest we’ve probably ever gone around the UK and it’s great. It means that we’ve got to go to loads of places that we’ve never been before like Hebden Bridge, Middlesbrough, Preston and Aberdeen,

it’s been really nice to go and see crowds of people that had never seen us before or that had had to travel to different cities to see us. It’s nice to play shows in their hometowns and the response has been great. We played a show in Sheffield the other day that felt like a London show which was really nice – Fern’s going to join us.”

Getintothis: I was just asking how the tour’s going?

Celia: “She doesn’t mean it. It’s been really nice, I’ve enjoyed all of it so far.”

Getintothis: You haven’t lost your mind yet?

Celia: “Well we’re only at the end of week two, we’ve got two more weeks so it might all fall apart soon but I don’t think it will. I’ve got a good feeling about this tour.”

Getintothis: And you went on tour in North America with Marika Hackman earlier this year, how was that?

Fern: “That was wicked. Very tiring. It’s a big country.”

Celia: “Yeah, we were doing our set and then playing for her as her band as well because we were on her album so it was the five of us and we had a lady out there called Rachel, who was amazing, who was doing sound for us.

Marika is like one of our best friends and Rachel who was looking after us doing our sound was really, really amazing as well so when you’ve got family like that and the shows are great, the people and cities – there are people across the other side of the world that are wearing your t-shirt and are so excited to meet you, want you to sign their album that they bought online, it just makes it all worth it and you just feel like ‘Oh my God how did this happen?!’ So it’s great.”

Getintothis: What’s it like performing your own music compared to backing for someone else?

Celia: “Well I really love playing those songs. And we love Marika.”

Fern: “It’s a whole other kettle of fish. It’s such a variation of music too, which is fun – you can kind of wear both masks.”

Celia: “The first show we did on this tour, I felt at the end like I was supposed to start playing Marika’s songs. I was like ‘okay now’s the time when we go and play Marika’s songs’. I’m sad that we won’t get to play those songs for a while. And it’s fun playing good music with your friends. We can be a totally different kind of performer as someone else’s backing band, it’s so much more relaxing to just be the band rather than be the band.”

Celia: “Yeah, cause it’s all on Marika! We can just like mess around in the background.”

Getintothis: How does recording the album (in 12 days?!) compare to doing so much touring?

Celia: “Well we recorded the album live. All the basis of the tracks is that we go into a room and we play it all together at the same time so the reason we could do it so quickly is because of the amount of touring we’ve done of those songs – for most of them, a few of them not, but mostly.

We’d been playing some of them for two years at that point and that feeds into how you want the album to sound and your cohesiveness as a group. That’s how we could just do it, go to the studio all together, just thrash it out and make it sound how we did live. But touring and being in a studio are very different. Both of them make you go slightly crazy in their own special way.”

Celia: “I love touring. I like the immediacy of the reaction that you get and getting to meet people after the show. It’s one of my favourite parts of doing this job.

Whereas, I feel like when I’m in the studio listening to stuff I’m more the kind of person that would overthink stuff and be like ‘Should we play it 2 bmps slower? I can’t even tell anymore.’ I may be the first to drop out of those conversations but Jules has the tenacity to stay like right to the end. They’re her songs, I think that also helps. I like touring, I like having the finished product.”

Fern: “When we’re touring I kind of miss the studio a bit sometimes. Like the kind of ground up thing. Where you have the songs obviously but the sounds just builds on top. I enjoy that but then the immediacy and the excitement of playing live is kind of the adrenaline.”

Getintothis: You toured with Inheaven and VANT in 2015, what was your reaction when you heard VANT’s plans to split?

Celia: “Yeah, it’s a shame. We haven’t actually spoken to any of them about it, I’ve been meaning to send a message. It is such a shame because they really cared about what they did. I don’t know why they’ve decided to stop but it’s always a shame when bands stop being bands because it’s such a big part of your life.”

Getintothis: What was the music you grew up with?

Celia: “Yeah, I was also into guitar music as well, I wanted to find stuff that was different that no one had heard of. I religiously read NME and was very into always knowing about the ‘new band’.”

Getintothis: Did you have one band you loved most?

The Jesus and Mary Chain: We didn’t get within a million miles of the establishment

Getintothis: Do you have particular female inspirations as well?

Celia: “I saw 10 Things I Hate About You when I was like ten and my Dad said it was the first film I saw where I was trying to decide who I was going to be or becoming aware of what I was interested in.

Julia Styles in that film was my absolute idol and that’s how I found out about Bikini Kill and The Raincoats and Joan Jett. A friend of mine then introduced me to Jack Off Jill and we used to listen to a lot of Hole. It’s such a broad question that I don’t want to kick people out because it feels like they’re different from the other bands that I used to really love or other people that inspire me like they’re just part of the whole make up of good shit.”

Getintothis: What have you got going on after the tour?

Celia: “We’ve got a couple more festivals in the year, European ones but apart from that we’re just going to spend some time with our loved ones. Jules is going to haul herself up and write some songs and I might build a table, go on holiday.”

Celia: “I want to sleep in my own bed for more than like…”