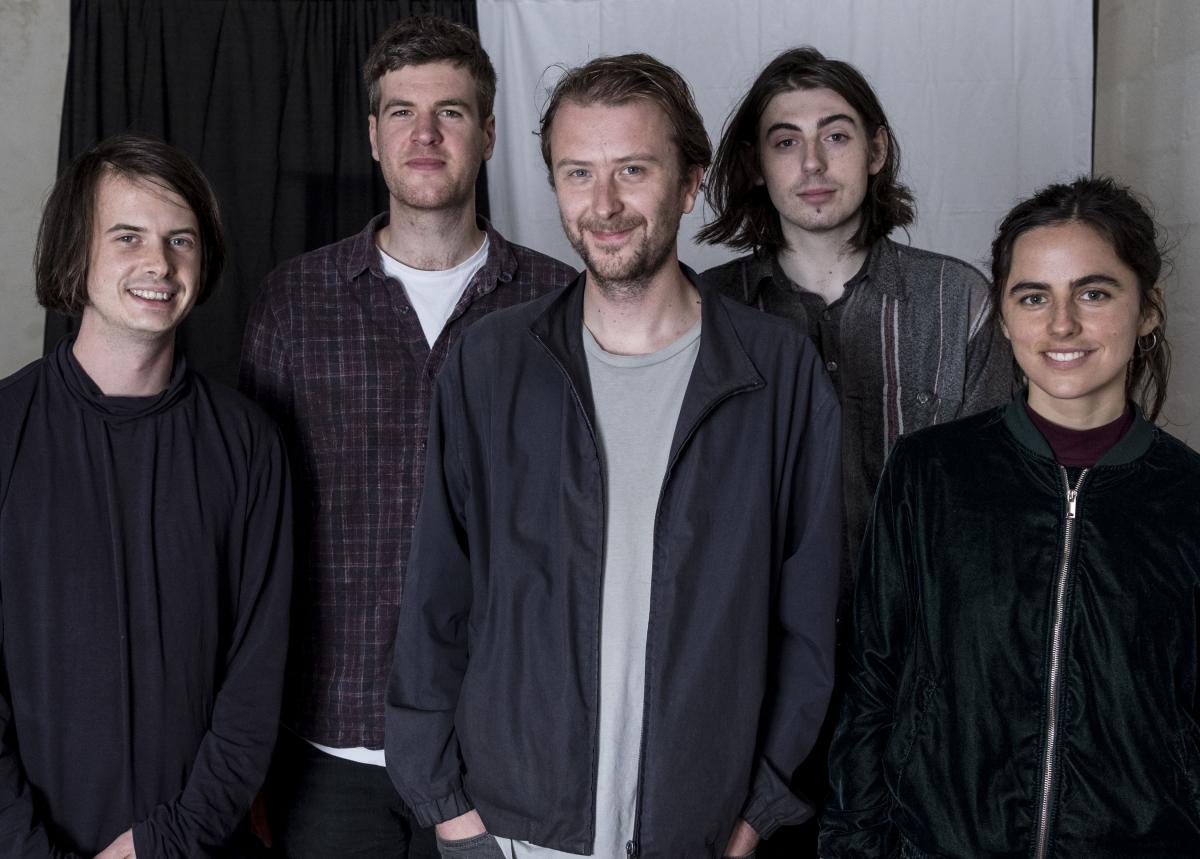 Spinning Coin prepare for their debut album release and first ever Liverpool gig, so Getintothis’ Cath Bore had a wee chit-chat with the Glasgow five piece.

Formed in 2014, Spinning Coin quietly got on with things in their native Glasgow for the first year or two, bit by bit, gigging locally and releasing EPs on cassette tapes.

Signing to The Pastels’ imprint Geographic 18 months ago changed all that.

Since then we’ve seen the release of two singles on beautiful 7” vinyl; Albany, a perfect two minutes thirty six seconds wistful imagining of what could have been been, written during the Scottish Independence referendum (‘Just be…brave‘), followed by Raining on Hope Street, more dreaminess but one of sweet longing and hurt (‘If I had enough heart I’d give it to you’) and, well, hope (‘be mine, be mine, be mine…’).

The band toured with Teenage Fanclub and Scottish Album of the Year 2017 winners Sacred Paws, hit festivals in the UK over the summer, and notched up stamps on their passports playing SXSW in Texas, and supporting Real Estate in Europe and UK.

This week, Spinning Coin kick off a headline tour of the UK, to be followed by shows with Girl Ray and Dinosaur Jr.

Next month, they release much anticipated debut album Permo.

They’ve come a long way since the beginning, when Spinning Coin were called The Sean Armstrong Experience. It’s up in the air at this end whether that’s the best band name in the world ever, or not so much…

‘I used to record just on my own quite a lot and started getting asked to do some gigs so whenever I played with a band I called it the Sean Armstrong Experience,’ says Sean. ‘It was meant to be a joke, it was meant to be a really bad band name.

‘The band members changed a lot,’ he continues. ‘Jack (Mellin, guitarist and fellow songwriter) and Chris (White, drummer) were up for playing for some of my songs. It was really nice of them that they wanted to do it. And then so we decided to keep playing. We did some of Jack’s songs as well so we were kind of like, this is fun. Let’s make it its own thing.’

With Cal Donnelly on bass, they put out initial EP releases on cassette.

‘Initially because it’s cheap. And they also sound good, I think, for the type of music we do,’ continues Jack.

Rachel Taylor joined the band proper early summer this year. ‘I sang on the single Raining On Hope Street and then I did it live a couple of times. And I guess there was room for a keyboard player and someone to sing some harmonies!’

Songwriters Sean and Jack offer complimentary sides of the same, for want of a better word, coin. Shiny pop freshness tinged with an endearing melancholy, drawing from Glasgow’s well-stream of jangly, soft-focus indie.

Vocals vary between sweet harmonising and urgent post punk aggression; guitars are either served with an angular strum, a pretty circular pattern, or sometimes an incendiary, overdriven amp for some garagey noodling, as if to say; don’t rest easy, the flip side of us coming next. Indeed, the band is not one to stay still and ferment; different band members have other projects; one reviewer labellng them tongue-in-cheekily an ‘indie supergroup‘.

Bass player Cal for example is one third of the magnificently named Breakfast Muff.

How do they juggle so many projects?

‘We all play music all the time so when we’re not doing one thing we’re doing something a bit different,’ says Jack.

He’s vague about where the band’s name comes from too; one theory is it’s a nod to John Mayall’s 1995 album, another they’ve named for Leeds band Beards.

‘It could be John Mayall or Beards or actually neither. (The name) was for another band originally, a hypno-coin, a hypnotising coin that a hypnotist would use. But I changed hypno to Spinning because I thought it sounds a bit too new wave or something.’

Permo is released on November 10. Named such, says Sean, to celebrate its permanence. ‘Something that lasts forever, and keeps going. Maybe like a spinning coin. It’s on vinyl so it will last a long time.’

The album was recorded in two different studios. Green Door in Glasgow, a creative hub for the city’s DIY scene – initial recordings by Happy Meals were done there- and also Edwyn Collins’ Clashnarrow in Helmsdale in the Scottish Highlands, where Hooton Tennis Club made second album Big Box Of Chocolates.

‘Both recording sessions were done with a similar approach, mostly live as a band. Raining On Hope Street and Tin single were done at Green Door first. We went to Helmsdale to stay and record with Edwyn shortly after. Then we mixed back at Green Door and decided to record some new songs as well to finish up,’ says Chris.

The band don’t waste time song-wise. The fourteen track album is busy with three minute wonders, some nearer to two.

‘It’s the way we do it. It’s just the way we write the songs. It’s bit boring to repeat thing s loads and loads we tend to not repeat too much.’

Social commentary is another Glasgow tradition Spinning Coin seem proud to continue. One the album Mellin covers the more practical and day to day, working for minimum wage and for a shitty boss, and inequality. On Money IsThe Drug he intones ‘there’s many people who live in luxury…there’s many more people there living in misery’

‘We just write about whatever we feel like writing about. We didn’t want it all to be political only some of the songs are. It’s pretty hard to ignore all the stuff that’s going on in the world. The world is ridiculously unfair.’

And yet, if anything, as we’re about to dive headlong into winter, it seems very much that Permo is an album of hope.

‘Generally the songs are just whatever we were feeling like writing about at the time. We don’t really think of ourselves as a political band, I think we are more into compassion than politics.’

Spinning Coin play the Breaking Out strand of Liverpool Music Week at EBGBs  on 29 Oct, supported by The Fernweh, SPINN, and Emilio Pinchi, and are on tour around UK from Saturday.