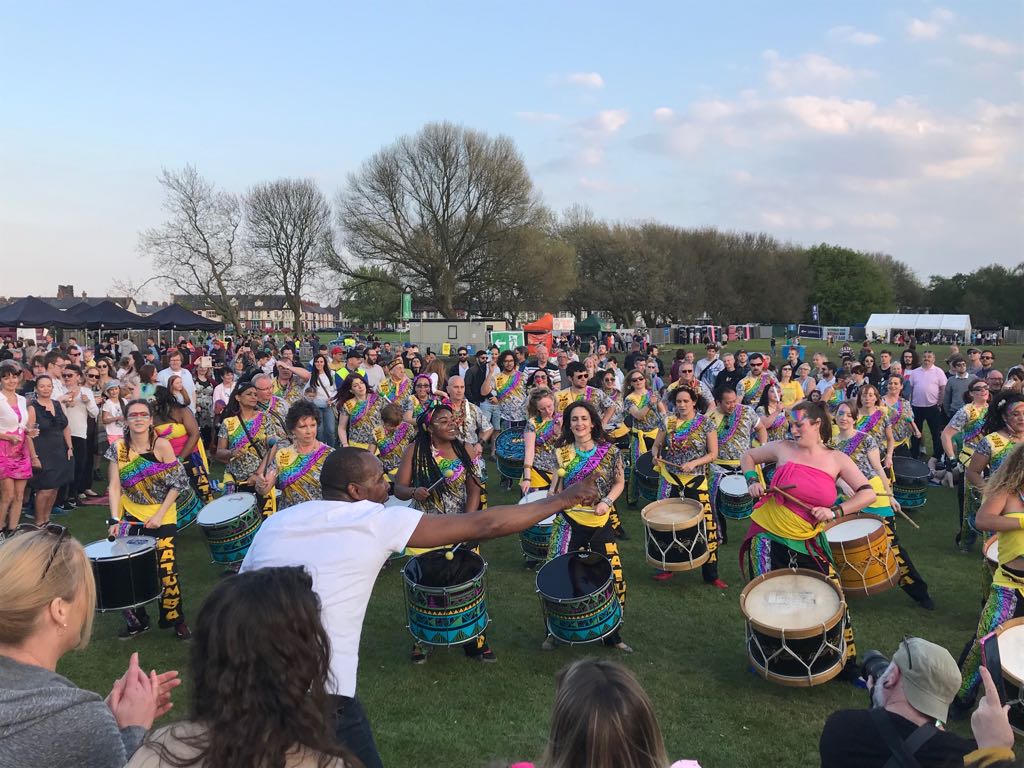 As Smithdown Road Festival attempted its most ambitious music event to date; Getintothis’ Mark Rowley was there to soak up the vibes and sounds on a gloriously sunny bank holiday weekend.

The grass roots, community festival has grown year on year, and 2018 attracted a range of popular acts to the various stages (17 in all) across the site of the festival in South Liverpool. Access to all stages was free.

Despite being a Community Interest Company in need of support and financial backing itself, Smithdown Road Festival 2018 was proud to support and fundraise for The Whitechapel Centre, a local charity that undertakes fantastic work for homeless people in Liverpool.

There were two distinct areas to the festival, the numerous pubs, bars, cafes and record shop along Smithdown Road; and The Kris Ealey and Bar stages in an enclosed area in the Mystery Park. The Mystery Park stages showcased over 30 bands over the Saturday and Sunday and included household names such as Space, John Power and Krafty Kuts; along with rising stars like The Mysterines, Ovvls and Hushtones.

Whilst there was a distinct Merseyside flavour to all festival stages (including those in the Mystery Park), entertainment for the festival was sourced from all corners of the North West and much further afield. As well as the music in the park there were various bars, food stalls, and a vegan market. There was also a children’s play and activity area (with quite a music theme) organised by Marmalade Skies and … for the kid in all of us, there was Infinite Wrestling!

The festival went out of its way to be family friendly and the Mystery Park stages were attended by music revellers of all ages, just like Liverpool’s other fantastic festivals, Africa Oye and Liverpool International Music Festival. 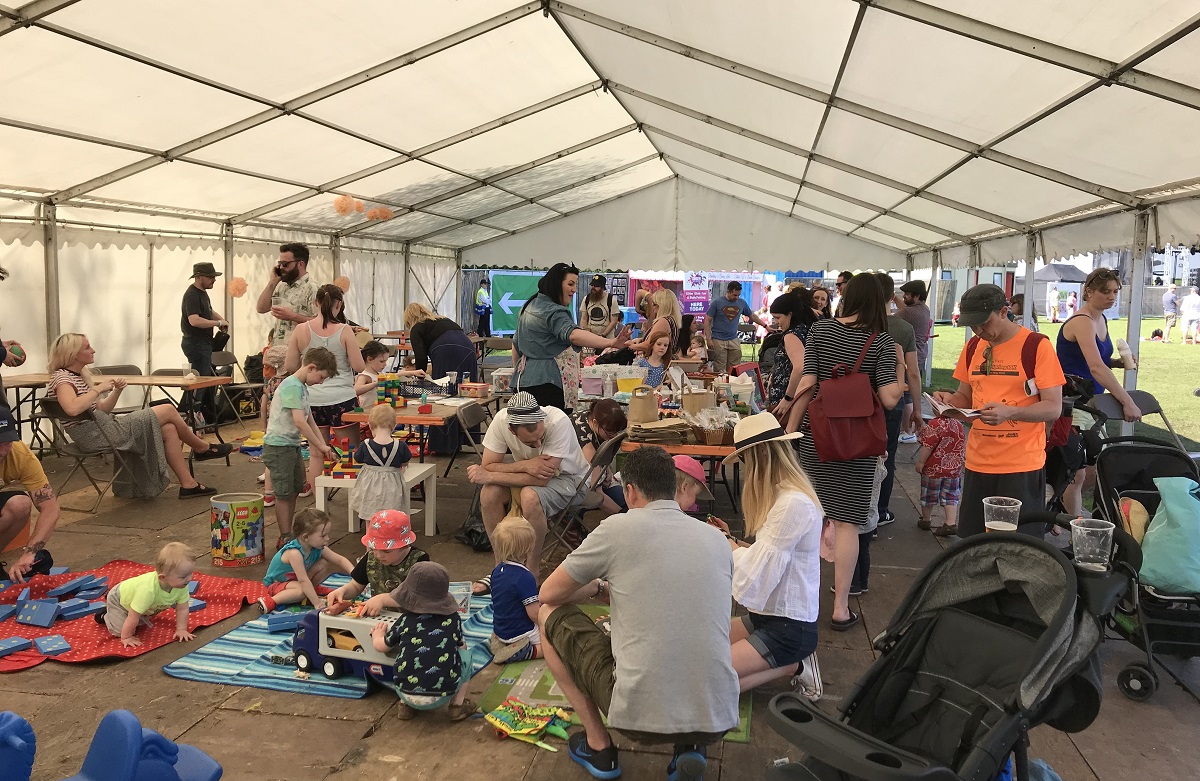 Often dismissed as an area that consists of just students and takeaways, Smithdown Road has outgrown that stereotype in major way. It now has excellent and affordable restaurants, very pleasant bars and pubs, and cosy and welcoming cafes. These are all independent businesses and there is a growing, upbeat economy for the area.

One of the main aims of the Smithdown Road Festival is to impress on the public what a thriving area this part of Wavertree is, which organisers hope will attract more people to visit, more often.

Whilst there were things going on in certain bars and cafes on nights leading up to the weekend, the festival sprung into life on the Friday night, with live music and DJ sets happening in a few of the bars and cafes. There was also a photography exhibition of previously unseen photos of Shack, taken by Paul McCoy, which stayed up in Naked Lunch Cafe for the duration of the festival.

In the build up to the festival, the weather forecast was for a weekend of brilliant sunshine. On the Saturday morning this prediction had come to fruition. The sun was beating down on Smithdown Road, but for the organisers, it was a morning of major stress as concerns about ensuring that each venue had a PA system and backline equipment had become a major headache.

Added to this, the major anticipated funding streams for the festival had not been forthcoming and festival organisers, Andy Scott and Kevin MacArthur (who arrange the festival in a purely voluntary capacity) were visibly fraught with anxiety about how the weekend would pan out, and if indeed the show could actually go on.

Despite these early worries, the venues, stage managers and the acts themselves all combined to work selflessly to ensure that not only did the show go on, but it was a resounding success. The spirit was such that, despite the odd moan about set times running late or being changed, everyone stayed positive and the vibe was just incredible. By the Saturday evening, Andy and Kevin were walking around with beaming smiles and deservedly so, for all the effort they’d put in. 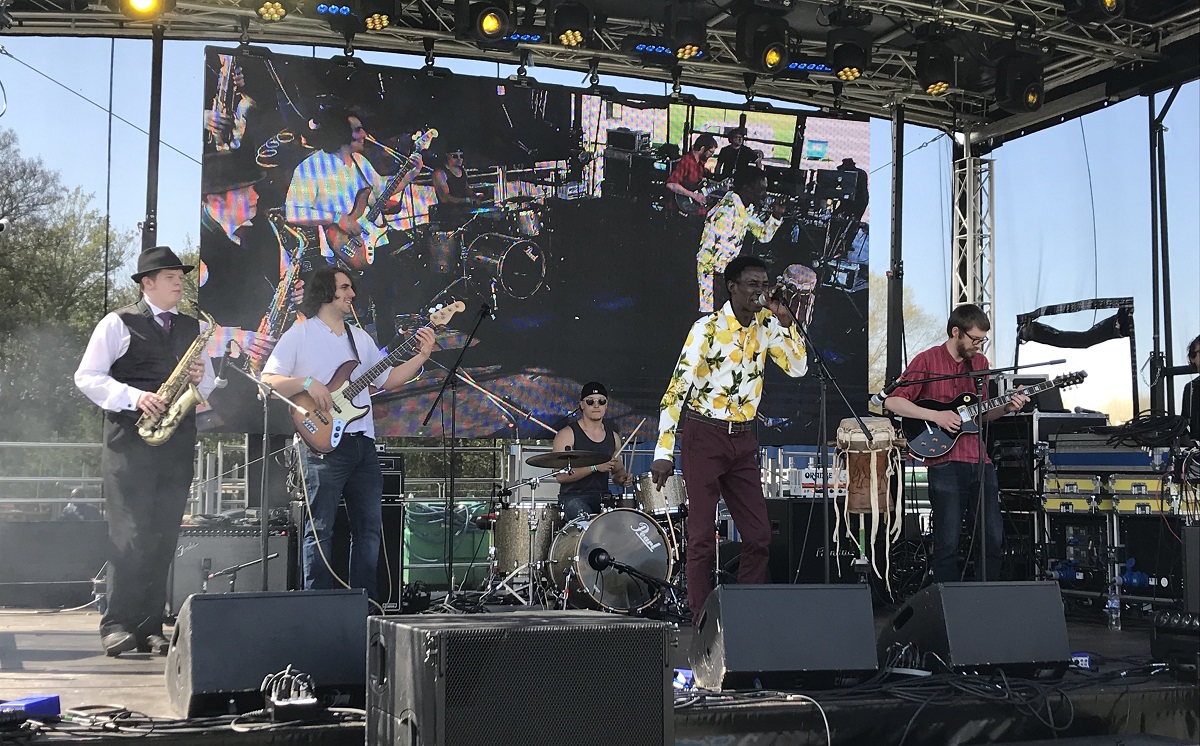 Saturday at Smithdown Road Festival was a beautiful day of music. Day time, the place to be was definitely in the Mystery Park, however as evening drew close the pull of the bars and cafes on Smithdown Road itself was too strong to resist. There was so much going on that, even if you were able to split yourself six ways, you would still be missing lots of brilliant music. The lineup in Kelly’s Dispensary for the Saturday evening was arguably the best bill of bands in one venue across the whole of the city. And as if that wasn’t enough, the lineup in Craft Tap Room, featuring bands like Scarlet, Caveparty and Eastcote ran it a very close second.

Liverpool Sound City 2018 review, pictures, best bands and what we learnt from the Baltic

Stand outs for Saturday were:

Mamadou – funky African rhythms and scratch guitar riffs, propelled by Mamadou’s drumming (along with his dazzling lemon print shirt of actual lemons) brought in the sound of summer. The set was truly infectious and heart-warming. (Kris Ealey Stage)

Silent-K – with Dave McCabe (ex-Zutons) on bass and frontman Chris Taylor sounding like Wayne Kramer of the MC5 (with falsetto vocals and hot guitar licks), Silent-K entertained and were superb in every way. (Kris Ealey Stage)

Katie Mac (with band) – with her 5 piece backing band, singer-songwriter and acoustic guitarist, Katie Mac bellowed out her Americana-influenced songs with such powerful vocals to a crowded bar of perspiring bodies. (Handymans)

Samurai Kip, Eyesore & The Jinx, Ohmns – three bands you just needed to be there to witness. Samurai Kip were their usual brilliant selves; whilst Eyesore & The Jinx‘s intelligent lyrics to very clever song structures meant that their set was a major highlight of the weekend as a whole. The atmosphere for heavyweight big-hitters, Ohmns was intense. The place just rocked and the band was insane. (Kelly’s Dispensary) 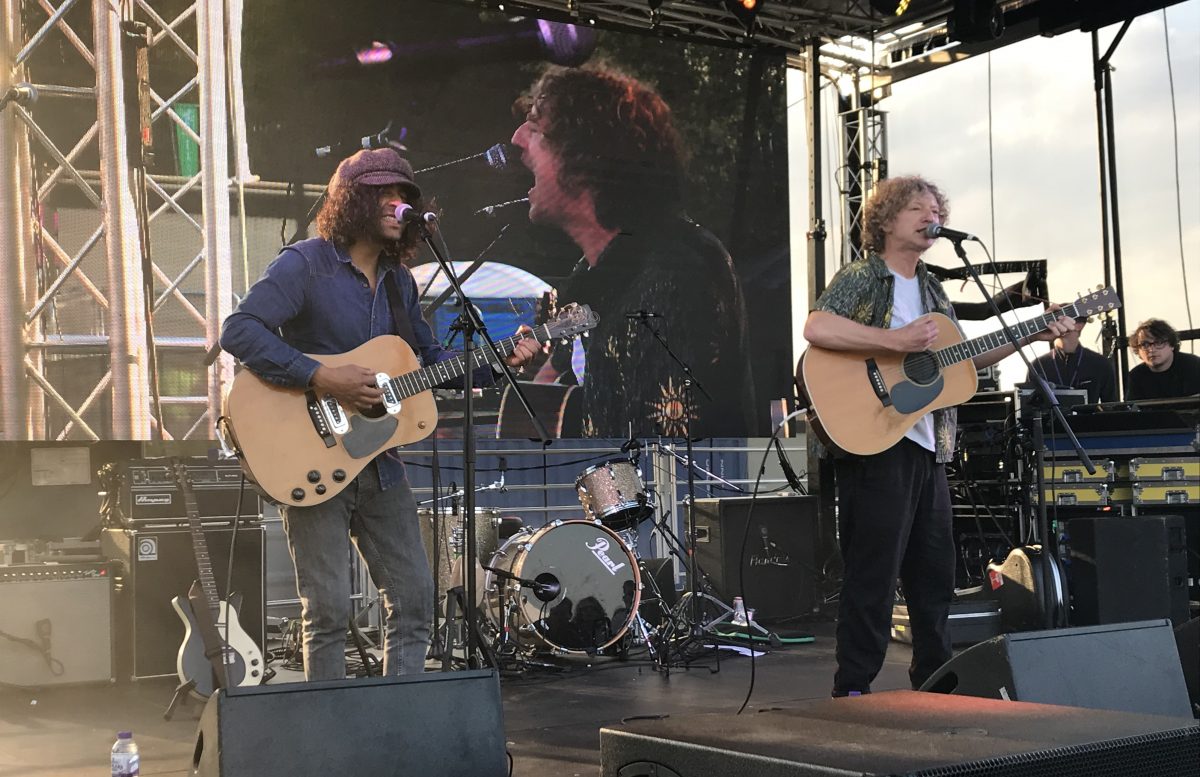 If anything the weather on the Sunday was even warmer than the Saturday. This was a day to just enjoy the music in the park and socialise with friends that you don’t get to see that often. Having said that, we do think everyone that attends the festival needs to get on board with ways to support it financially. It is a free festival, so don’t try to smuggle alcohol into the Mystery Park site. It is the purchasing of drinks from the bars that will keep it free. And maybe buy a t-shirt as this will help also.

With decent beer on tap, and family and familiar faces of people to catch up with, the lure of the crowded bars on Smithdown Road was not as strong as the evening previous. The pull however was eventually succumbed to and there was plenty to check out once the main drag was hit. 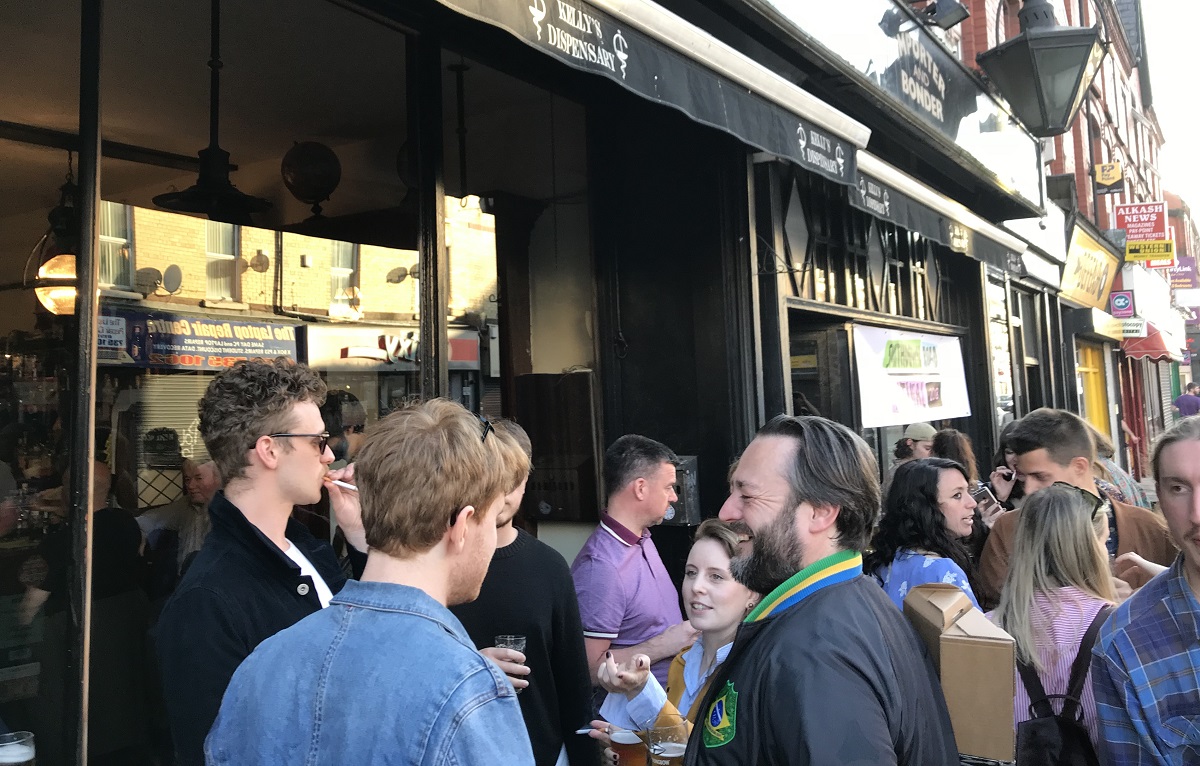 Stand outs for Sunday were:

Edgar Jones &The Joneses – Edgar’s northern soul inspired rhythm and blues was a joy to behold. There were plenty of smiles all round from band and audience. A fantastic feelgood set that had everybody nodding and moving their bodies. (Kris Ealey Stage)

Manalishi – the Manchester garage-noise rock four-piece put in a formidable late afternoon set. Most definitely not for the faint-hearted, this band melted faces in an Ohmns-type fashion. They were heavy on the ears, as the 25 people lucky enough to be in the audience will testify! (Evil Eye)

Siren – coming on later than billed, Siren band members performed an excellent set and were clearly happy to be part of the festival. (Cafe Oro)

SPILT – Runcorn garage-psych grunge rockers gave a brilliant account of themselves as always. Despite using a kiddies drum kit that drummer Josh Cunningham threatened to smash into pieces, the band played a blistering set that woke up the bar regulars. A party atmosphere prevailed in which Elliot Gill (of The Bohos) took over guitar duties from Mo Molyneux, for set-closer Acid Baby. By this time the stage and all around it had gone completely mental. Except for bassist Ronnie Ayres, just playing his bass and exuding his stable nonchalant cool. (Hill 16)

Deja Vega – announced earlier in the day, this was a real bonus to the festival. For the second night running, Kelly’s was wall-to-wall booming. And thumping, motorik psych-rock trio Deja Vega (from Winsford) were happy to oblige and join the dots. If anyone there didn’t know Deja Vega before Sunday night, they sure as hell know them now. (Kelly’s Dispensary) 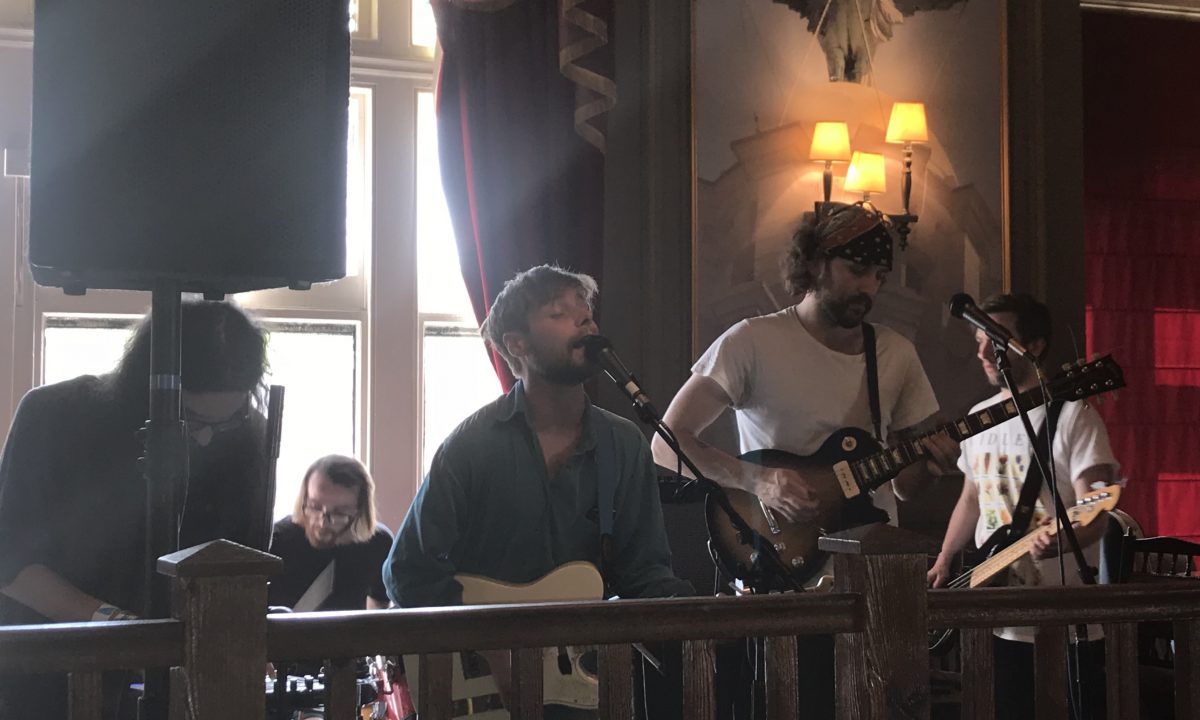 The bank holiday Monday on Smithdown Road was a much quieter affair following the weekend’s excesses. With so much beer and sun consumed during the previous couple of days (along with the Mystery Park stages not having live music), a lot of folk stayed home to recuperate, whilst the rest of us went out to listen to folk.

Standouts for Monday were:

FUSS – another surprise announcement on the morning of the festival, Fuss brought their cosmic psych rock to elevate us onto a different plane. Finishing their set with last summer’s release Coma, the soaring guitar lead that echoes through the song is probably still ringing out in the rafters of the venue. (The Brookhouse)

Lucy Mayhew – this was a lovely relaxing way to spend the Monday afternoon, listening to Lucy’s solo acoustic set. An accomplished performer despite her tender years, we can hope and expect to see more of this Wirral performer in the future. (Evil Eye)

Astles – A solo acoustic set exuding such class and talent, Daniel Astles was just amazing. If you haven’t done so already, you need to check this lad out. You won’t be disappointed. (Evil Eye)

Dave O’Grady – front man for Seafoam Green, Dave O’Grady is a fantastic singer-guitarist. His solo acoustic set was a mix of his own songs and Americana blues covers all belted out with feeling and true class. (Frank’s Bar)

This year’s Smithdown Road Festival was a resounding success and a truly remarkable achievement given its humble beginnings, its free access and the fact it is organised by volunteers. 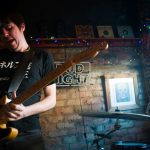 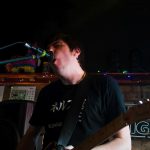 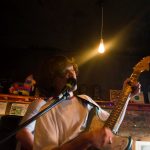 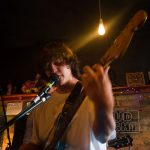 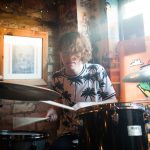 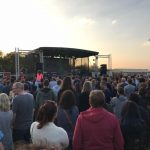 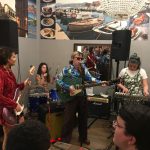 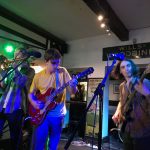 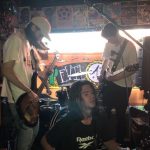 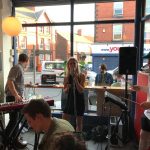 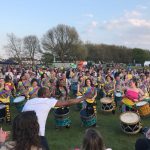 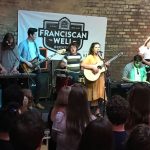 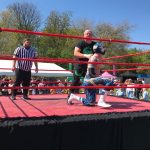 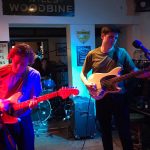 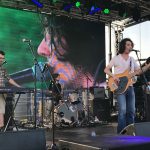 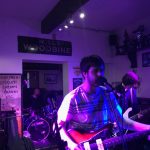 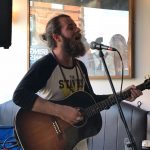 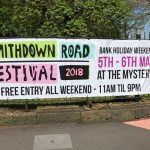 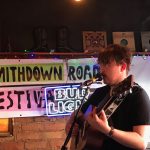 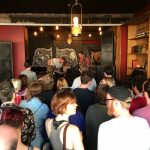