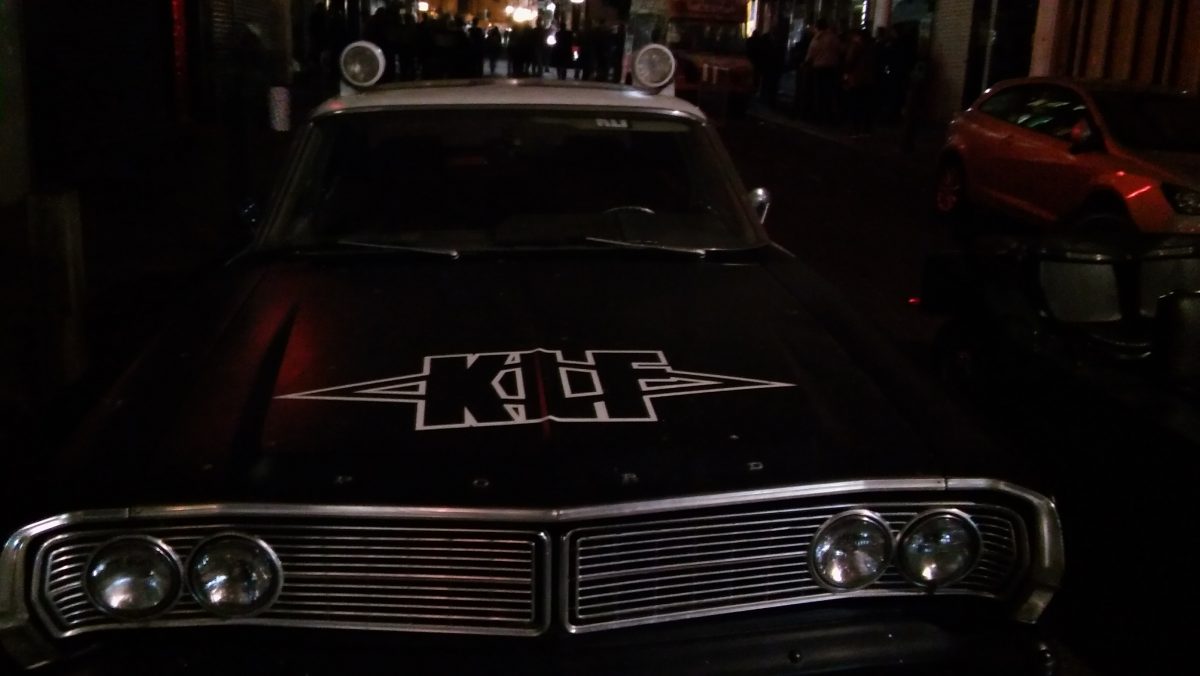 As The KLF’s Doctorin the Tardis celebrates its 30th birthday Getintothis’ Gary Aster looks back at the strange history of the unlikeliest number one record.

30 years ago today, on the 23rd of May 1988 a record was released which began an unexpected yet irresistible rise towards the top of the UK singles chart at a time when scoring a number one hit single still meant something,

Indeed at a time when a UK number one was still something of a crowning achievement – a sign that you had ‘made it’. Entitled Doctorin’ the Tardis by a group temporarily calling themselves The Timelords, it was undeniably a novelty record, long considered by discerning music fans to be the perhaps the least artistically credible type of song to gatecrash the singles charts, as such records regularly did in those days.

It was not then, to be sure, a classic record, or even a half decent record. On the contrary, it was a bit of turkey truth be told – a shameless, stomping piece of musical hype which, for reasons best known to its creators, combined elements of glam rock, house and the Doctor Who theme tune to lucrative and chart-topping effect.

So why waste words recalling a record which even its creators appeared to be somewhat embarrassed by you might, not unreasonably, be wondering. The answer to that lies partly in who was behind the record, how they achieved their success and what they would go on to do soon after.

Early on in 1988, the duo of Bill Drummond and Jimmy Cauty – who were then operating as the Justified Ancients of Mu Mu (and were soon to re-christen themselves as The KLF, of course) called a halt to their early incarnation and opted for a change of name and direction, not for the last time in their careers.

They wanted to get away from the knowing, ironic and subversive nature of their initial lawyer-baiting recordings as the Justified Ancients of Mu Mu. Acid House had caught the pair’s attention and they entered a recording studio with little more than an initial idea – to record a house track which used elements of the Doctor Who theme.

Clearly they hadn’t thought long about this idea because it soon became apparent that it was a non-starter. The rhythm and timing of the Doctor Who theme was entirely incompatible with the sort of rhythms typically found in house music.

The KLF- a reflection on Welcome to the Dark Ages

They soon realised that the only beat they could get to work with the Doctor Who theme was the so-called “Glitter beat”, so beloved of naff early 70s glam rock and pop music from the likes of The Sweet and Gary Glitter, and which is about as far removed from a house beat as you could get.

If you’ve ever seen footage of an early 70s Top of the Pops from the glam era then you’ll be familiar with the sort of, ahem, “dancing” which accompanied this beat – hands in your pockets (but not too deeply), feet fixed firmly to the same spot, let your knees do most of the work, elbows out and sway from side to side in platform shoes, flares and a checked tank-top. It’s a vision of hell which those of old enough to witness first hand have spent a good deal of time trying to forget ever since. This was not the sort of beat that could be called upon for use in a hip, contemporary dance record.

But Cauty and Drummond were not the sort of chaps simply to give up having fallen at the first hurdle. Going with the flow, they abandoned the idea of making a hip, dance record and determined instead to revise their plans. With cheerful pragmatism Cauty concluded ‘OK it’s going to be poppy so let’s just go for it’.

As Drummond tells it, the pair consciously opted for each available “lowest common denominator” and, by the end of their second day in the studio, ‘We realised we had a number one on our hands’.

The pair’s previous releases as the Justified Ancients of Mu Mu had been issued on their own independent label, from necessity as much as idealism, which was fine for the sort of cult releases they’d been involved with up until that point, but with the top of the charts in their sights that could now be a disadvantage. The UK Top 40 singles chart was not (quite) the exclusive preserve of the major labels, but still there was a tendency to regard any independent releases which broke through as exceptions to the general rule. This was the natural territory of the major labels and they had both the money, experience and resources to dominate it and rig the game in their favour.

The KLF in LIverpool: Ice cream vans at midnight and strange stamps

Cauty and Drummond had between them accumulated years of, at times, bitter experience of the music industry and knew full well that having a track with the potential to make it to number one was only half the battle. They needed a way of standing out from the rest – a hook to catch the media’s interest and give them something to write about. As it turned out, the answer was parked outside the Essex studio they’d been using.

Their record would not be presented to the world as the work of Cauty and Drummond. Responsibility shifted instead to Cauty’s second-hand car, a 1970 Ford Galaxie Interceptor police vehicle which had been used as a prop on various film sets.

The car was hastily given the name Ford Timelord, occasionally given a voice by the band’s publicist (hiding under a blanket on the back seat) and was sent out to handle the interviews. The results were mixed to say the least, but it gave the record its unique selling point and the media something else to write about, even if some of the tabloids felt moved to expose the “scam” and reveal to their readers that the car hadn’t really made the record (No! Really?)

Towards the end of May ’88 the song climbed its way into the UK top 40. Channel 4’s flagship Sunday morning ‘yoof’ TV programme, Network 7, included a feature about the single and made an attempt to expose another related type of scam. It was suggested to Ford Timelord by a serious and concerned- looking journalist (well, as serious as one can look whilst interviewing a car with a funny voice) that the record wasn’t really very good, and that the band were surely laughing all the way to the bank at those who were buying it.

There may have been some truth to this. Cauty later admitted that having the car front the record was simply because they were both too embarrassed by it. Drummond, for his part, told Radio One’s Steve Wright that they justified it to themselves as something that was “part of a long-standing British tradition – something that Timmy Mallet would understand.”

Now the track had entered the charts a video was required. It consisted mainly of shots of Ford Timelord driving around various Neolithic and mythical sites in Salisbury and environs, including Stonhenge, Avebury standing stones and the Uffington White Horse.

This footage was intercut with shots of Ford sparring with some poorly assembled and man-powered, homemade Daleks. A classic it was not, but it served its purpose and the record continued to rise up the charts.

Behind the scenes, Drummond and Cauty had employed the services of a group of pluggers – people who usually acted on behalf of the major record companies, targeting those record shops used by pollsters Gallup to compile the weekly singles charts. The not-so dark arts of hyping or ‘working’ a record were employed to the full and on Sunday 4th June the seemingly impossible (or perhaps the inevitable) happened, and the song landed at number one. It reached the Top Ten in dozens of other territories too and made the number one spot in a handful of other national charts.

Despite the confidence and bravado of Drummond and Cauty, this must have come as something of a surprise, if a welcome one. Of course, it also meant that the KLF coffers were suddenly flushed. Given that the band were essentially their own managers and record label bosses, the spoils from this were not inconsiderable. In some ways the serendipity of their hit paved the way for much that was to follow.

Cauty’s car became an iconic part of the KLF’s imagery, and was the star of their unfinished road movie ‘The White Room’. Their initial number one gave the band its first taste of commercial success which they naturally tried to repeat. The string of KLF hit singles which soon followed were aimed at the top of the charts with the accuracy of laser-guided missiles. The notion that the band were somehow scamming their fans and the media gained traction however, and it’s a suspicion which they have never fully managed to shake off, much to their evident frustration.

That impression was hardly helped by the publication of their book The Manual – How to Have a Number One the Easy Way, which told the story of Doctorin’ The Tardis from beginning to end and revealed their “zen-archistic method” for reaching the top of the charts.

It’s a terrific read combining a hard-nosed cynicism about the music industry with a pure, uncritical love of pop music. It’s only ever been printed twice and both editions now regularly change hands on eBay and elsewhere for three- figure sums.

But above all the book isn’t really an account of what occurred.

It’s an exhortation for the reader to follow in their footsteps, risk everything and chase their own ambitions. Thirty years later most of the advice it offers about scoring a hit single is surely past its sell-by date, but it’s core message, that you shouldn’t wait for permission or wait for the right qualifications or experience and instead should just go out and do whatever it is, remains as potent as ever.