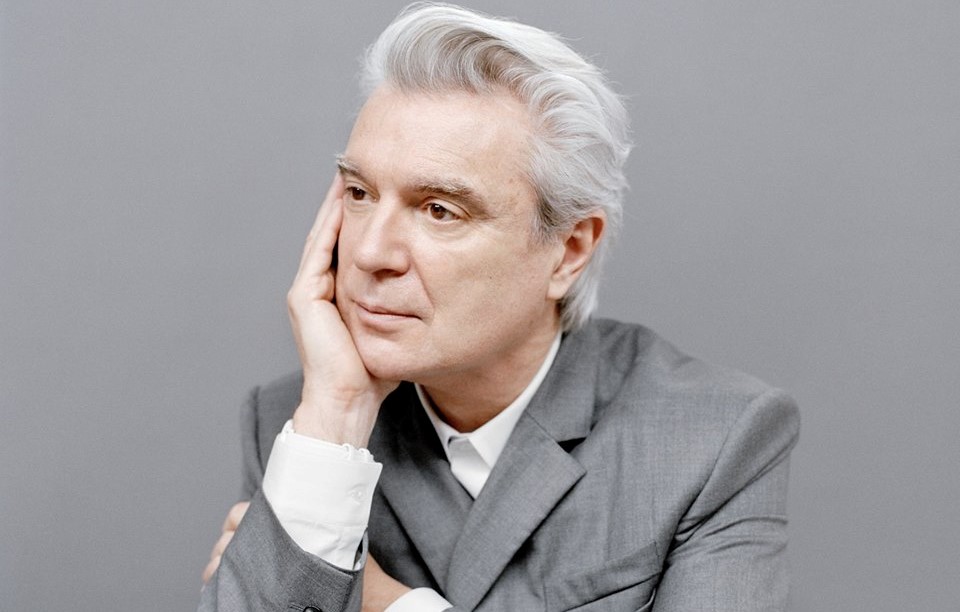 Talking Heads frontman David Byrne brings his American Utopia tour to the UK, Getintothis’ Sean Fearon gears up for the show of a lifetime.

It must be difficult for music titan’s like David Byrne. You have such an expansive and loved back catalogue, but you’re also constantly trying to develop as an artist and try new things.

Fine for an album, but try to push it live and you could have a lot of angry dads on your hands.

It’s lucky then that Byrne is a master of his craft when it comes to live shows. Any Talking Heads fan will be aware of the concert film Stop Making Sense, and that Byrne knows how everything should be placed – from lighting to backdrop to choreography. More an auteur than actor or director.

Tonight is no different. As the crowd waits, the stage show cases a chair, a table with a brain upon it and a backdrop of chains.

When the lights raise to reveal Byrne as the chairs occupant the brain becomes the prop that guides the audience through opener Here. It seems like very typical Byrne from around the time of Grown Backwards – mellow, insightful and trying to get to the heart of the human condition through his almost inhuman analytics. The tone it sets as an opener suggests it will be a quite sedate affair.

To the surprise of almost everyone in attendance this mood gets thrown out the window as the band thrusts into X-Press 2 collaboration Lazy. Immediately the beard-scratching ceases and the crowd erupts into awkward-grooving and chanting along.

From this point, Byrne structures his set like a DJ at the best house party ever, bringing out classics like I Zimbra and Slippery People before counterpointing his polyrhythmic past with a couple more cuts from American Utopia.

For a 66-year-old man there seems to be no signs of fatigue, as he stumbles, prances and wriggles about the stage. The plastic-nerd stiffness of his youth seems to have matured into a friendly and open demeanour, reminding you of a particularly enthusiastic art-teacher, and he looks to genuinely enjoy the full aspect of his and his bands performance.

The boldest moves seem to come at the middle of the night. This Must Be The Place and Once In a Lifetime not being the closing or encore seem like bizarre – but welcome – choices, and the inclusion of a somewhat obscure, incredibly fun Brighton Port Authority (aka. Fatboy Slim) track Toe Jam.

This continues into more unexpected cuts, including the tribal-insanity of Born Under Punches and even a track from Naked (!) before bringing the set to a close with arguably Byrne’s most well-known track Burning Down the House.

The encore brings extra treats, as well, in the form of Imelda Marcos inspired Dancing Together and an awe inspiring locomotive thrash through The Great Curve.

The crowd demand a second encore, and despite the shouts for Psycho Killer and Road To Nowhere, Byrne once again subverts expectations.

After a brief introduction that a Janelle Monae track will be performed the band storms through the percussion and vocal heavy Hell You Talmbout, a track that urges the audience to chant the name of victims of police brutality in the United States.

Unfortunately, the passion and intensity of this issue seem to fall flat with a British audience, and despite a riotous applause, you can’t help but feel that some members of the crowd feel short changed by not hearing their personal favourite so they can whistle on the train home.

A similar reaction also seems to be had to opener Laura Mvula, whose all-too-short set comprised of a handful of synth and drum heavy tracks with post-rock dynamics ranges and soulful, poetic vocals.

Unfortunately, the majority of the crowd spent this time fumbling around looking for their seats or checking the England scores – which is a shame, because they missed a genuinely interesting and artistic foil to the headliner.

Social reaction to David Bryne at the O2 Apollo in Manchester

David Byrne in Manchester last night was just incredible. Probably up in my top 5 gigs ever. Cheers @DBtodomundo! pic.twitter.com/4HgTHjol8o

The David Byrne show lived up to the hype and then some @DBtodomundo #americanutopia #manchester ACE and MINT .. what musicians they were #wow pic.twitter.com/evuzkYipMa

Mind Blown…. What a set, what a show! @DBtodomundo returns with an awesome and thoroughly entertaining show #americanutopia #davidbyrne #manchester #musicislife pic.twitter.com/6lX3hwb1V5

I've been lucky to see some fantastic gigs in my time – Springsteen in Leeds, The Cure at Hammersmith, Arcade Fire in Scunthorpe(!) – and @DBtodomundo was up there with the best of them last night in Manchester. An utterly unique live performance.