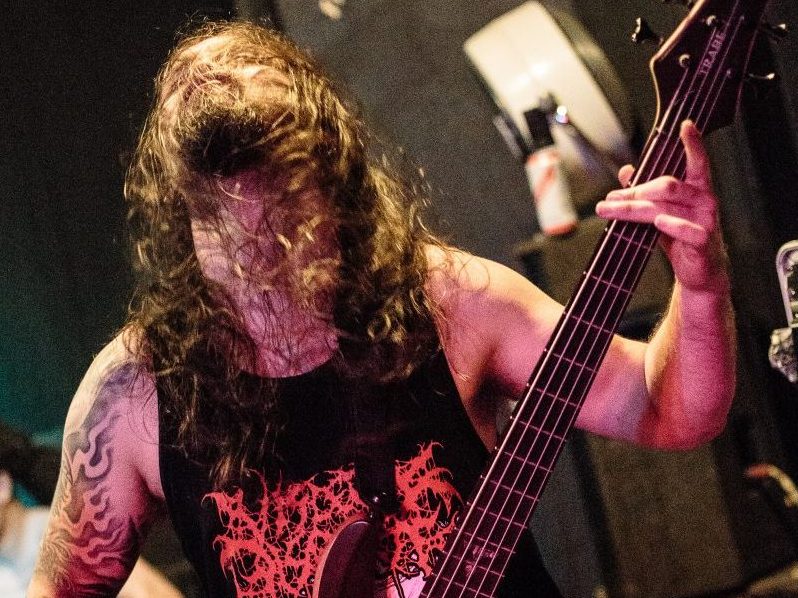 Slam hammers, the Frank Mullen chop some of the most brutal grooves in metal. Getintothis‘ Nedim Hassan ventures into the world of slam death metal and profiles what is arguably the heaviest event on the British metal calendar, UK Slam Fest.

Merseyside has a rich, if often overlooked, extreme metal heritage. Carcass and Anathema are the two most well-known examples of artists from the area who went on to have a profound influence on international metal scenes.

Yet, Merseyside continues to be home to pivotal players in the metal underground. One such individual is Joe Mortimer, who is equally recognised as an accomplished bassist, playing in bands such as Neuroma, Colpocleisis, Crepitation and Cancerous Womb, and as a key promoter on the death metal scene.

In recent years, in particular, Joe has become one of the central figures behind the rise of UK slam death metal through his role as one of the promoters involved with the annual UK Slam Fest. In this month’s column, we talk to Joe, exploring the phenomenon that is slam death metal and finding out why UK Slam Fest continues to go from strength to strength.

Although it would not emerge as a sub-genre in its own right until much later, the sound of slam death metal has its roots in the music of artists like Suffocation and Internal Bleeding.

As Joe explains: “It was largely the New York death metal scene in the late 80s/early 90s which really came up with the vibe where they would have aggressive death metal and then they would have like some huge kind of grooves and breakdown riffs, some heavy catchy riffs. So later on those riffs kind of became idealized […] so when you see these bands playing those riffs the crowd would go crazy for those riffs because it was an opportunity to ‘lock in’ with the rhythm of it and engage with the music as opposed to head banging maniacally as metal heads did in the 80s and the 90s. It was something where people could bring out an aggression and allow people to move in time with it.“ 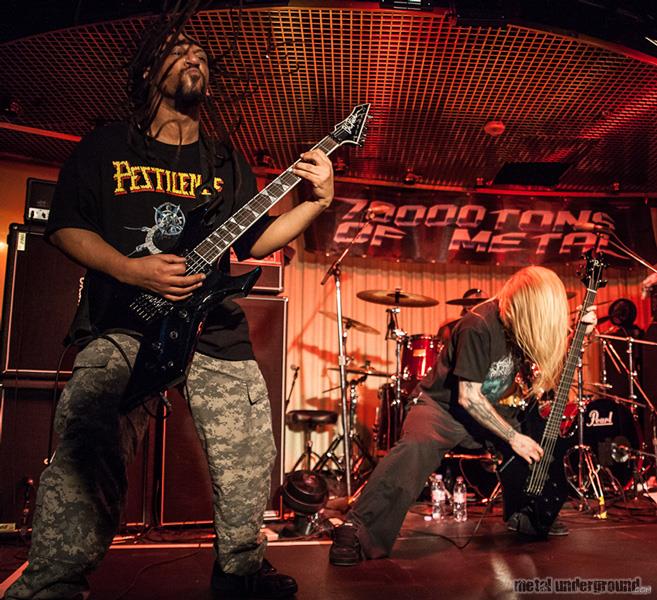 The rise of bands either claiming to be, or being labelled as, slam death metal has grown rapidly over the last fifteen to twenty years. So much so that Joe points out how now there are sub-genres within the sub-genre.

“There’s now even varieties of slam. Like, for example, Colpocleisis we call ourselves ‘caveman slam’ just for the fun of it, but that’s more similar to bands like Cephalotripsy or Cerebral Incubation, where it’s focused on the relentless, almost club-beating (hence, caveman) [sound]of a riff, where it’s all about the groove, all about the heaviness, all about the brutality of every riff that is played.“

It was this growth of an interest in the sub-genre (that is still admittedly a niche area of extreme music), which inspired the formation of UK Slam Fest in 2015. The only UK festival dedicated to hosting international and locally based slam death metal bands, UK Slam Fest has enjoyed considerable success in its early years.

Held at Temple of Boom in Leeds, the festival sells out every year. To match the demand from bands applying to play at the event, the organisers quickly realised that they would have to expand the festival, which was initially held over one day.

Joe explains: “Ever since that first year we get applications from many, many bands all around the world asking to play the festival. So, we decided to do a second year [and]invite some more bands over. Due to the phenomenal demand from bands wanting to play, we decided to do a pre-show, where it was kind of an over-spill of bands. […] The pre-show stuck, so now it is a Friday and Saturday event.“

UK Slam Fest’s reputation has been built upon securing exclusive acts and British debuts. Joe elaborates: “Last year we had Cephalotripsy playing the show and it was a European exclusive. They flew in to play our festival only so that was huge for us. This year we’ve got Wormed who haven’t played the UK before for many years. They’ve only played one show before in London, so they’re going to be coming over and headlining this year. So we always have a strong focus on UK exclusives, UK debuts and giving as many bands the opportunity to play as possible.” 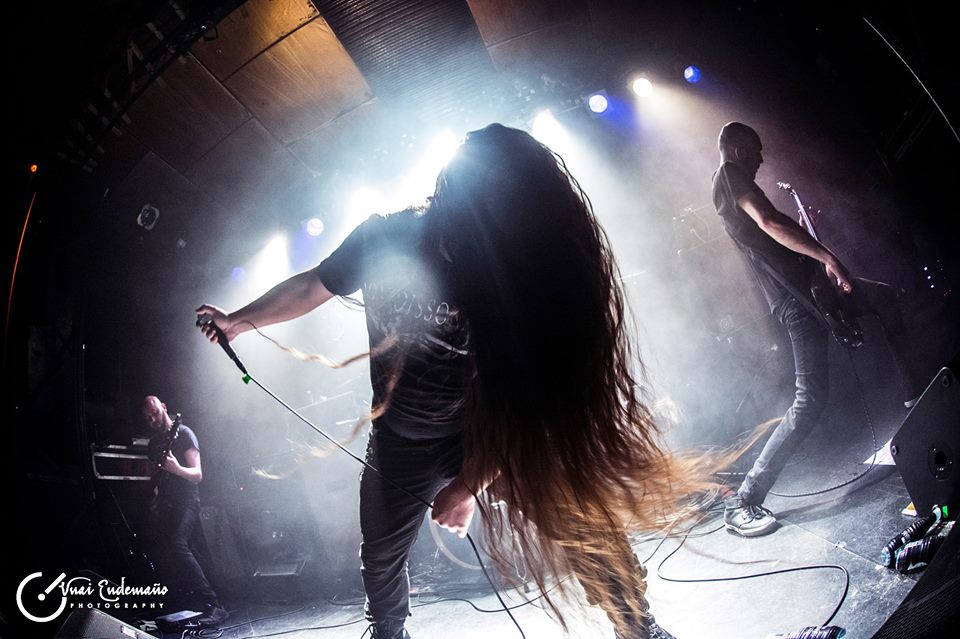 Despite the extreme sound of many slam death metal bands, Joe emphasises the importance of a party-like atmosphere: “I wanted crowds to come, I wanted crowds to interact, I wanted people to party and have fun, I wanted a great time. There’s been a lot of shows in the past that I’ve played in the UK where the crowds kind of appreciate what you’re doing but it just didn’t have that vibe that a lot of European festivals have, so I wanted to try and bring that to the UK.“

The emphasis on crowd interaction is central to slam: “When it comes down to slam – you expect a circle pit, you expect to see people slam dancing, you expect to see the slam hands throwing down and the slam hammers.” The latter two dance styles refer to different ways of swaying arms up and down in time to the grooves of the riffs, in a way that is not far removed from dance moves seen in hip hop. Slam hammers are simply a more aggressive form of this in which a fist is made and the arm ‘hammers’ down in time with the riffs.

Slam bands and fans may also enact what is known as the ‘Frank Mullen chop’. Named after the vocalist from influential death metallers, Suffocation, who popularised the move, this is a short chopping motion which uses a lot of wrist but the arm hardly moves. As Joe puts it with a grin: “It’s kind of a death metal jazz hand. A less flamboyant death metal jazz hand.“

For all the sonic brutality and gory imagery, our discussion of partying and forms of crowd participation illustrated the way in which there is a lot of humour associated with the slam scene. People don’t take themselves too seriously and the emphasis is on fun and community. For those interested in sampling this scene, this year’s UK Slam Fest takes place between on October 5 – 6.

Before we go and practice our Frank Mullen chops, it is once again time to delve into the metal underworld to see what new releases we can excavate.

Some death-doom metal acts explore other worlds through using keyboards, ‘beauty and the beast’ vocals or instruments associated with other genres. Atavisma conversely convey visions of rituals, old Gods and gothic relics through a crushing combination of death, black and doom metal guitar work. The debut offering from this French group, which is scheduled for release on 23 July, features cavernous, guttural vocals from the mysteriously named L. At times, the vocals are barely audible and buried beneath monolithic distortion overlaid with some sharp Autopsy inspired death metal riffing. This enhances the atmosphere of this record, which although it outstays its welcome in places, plunges into some satisfyingly devastating doomier depths on evocative tracks such as Invocation of Archaic Deities and Sacrifice unto Babalon.

This duo from Brisbane, Australia have taken their time to craft a regal follow-up to 2012’s debut album, The Sins of Aquarius. Kicking off with the death metal infused battle metal assault of King of the Beasts, this album rarely drops in intensity and quality. Clear sharp riffing gives way to a morass of death metal noise on Neurian Transformation. The epic Trail of the Serpent and The Thirteenth Card are stand-out tracks with their dynamic torrents of frenetic blackened riffing seguing into slower, darker and dramatic hooks.

These Japanese black metal miscreants are back with a suitably grimy new EP. Unholy Bestial Fire smoulders through a cacophony of Eastern-tinged guitar distortion, with vocalist Yasuyuki’s sneering demonic voice reminiscent of an extra from the Evil Dead movies. Sounding like the product of copulation between Motörhead and Mayhem, Black Satan of War is an infectious dose of punk-infused blackness. Complete with a speeded up Thin Lizzy Cold Sweat riff, this is the highlight of an entertaining slice of old school thrashing black metal.

After sampling material so close to the fires of hell, we are going to begrudgingly venture outside into the sunshine in our corpse-paint to cool down and buy an ice-cream. Until next time, keep supporting your scene and come August don’t forget to venture into the Bloodstock New Blood tent to salute the newly crowned Merseyside Metal 2 the Masses Winners, Equinox.