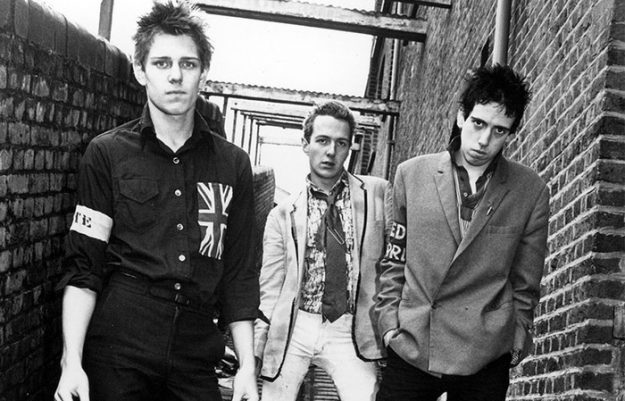 In the middle of 1978, two years after The Clash had formed, the NME ran a cover filled with the face of Mick Jones, a potent image of the guitarist staring straight at the reader, face framed with shaggy hair, simultaneously defiant and vulnerable.

The picture was captioned, in the style of a typed police charge sheet, ‘JONES, MICHAEL Age: 23 Occupation: Guitarist in a bloody good rock band’. The cover was calculated to stop readers in their tracks.

Mick’s long hair, literally like a spiky crop that had been allowed to grow out, and the ‘rock band’ descriptor (no mention of ‘punk’ or ‘new wave’) were signifiers that change was afoot – still a band with outlaw credentials (after all the story inside was about them spending a night in the cells) but now a ‘rock band’ rather than just a punk band. Fans wondered where was this was going?

Their live shows at the time were volatile and ferocious, their attack undiminished even though they were now playing to larger crowds

The second time I saw The Clash was musically fantastic but also frighteningly violent. A bunch of us travelled to Crawley to see them on a date in their On Parole tour. In the cloudy summer afternoon groups of the arriving audience drifted around the concrete shopping centre, punks, skins, smoothies, even some teddy boys, looking at each other warily. It was like an audition for a Richard Allen novel.

In the venue, a vast and charmless leisure centre, it was clear that skinheads were a huge contingent, with a number of NF supporters. The atmosphere was highly charged, adrenalinised. 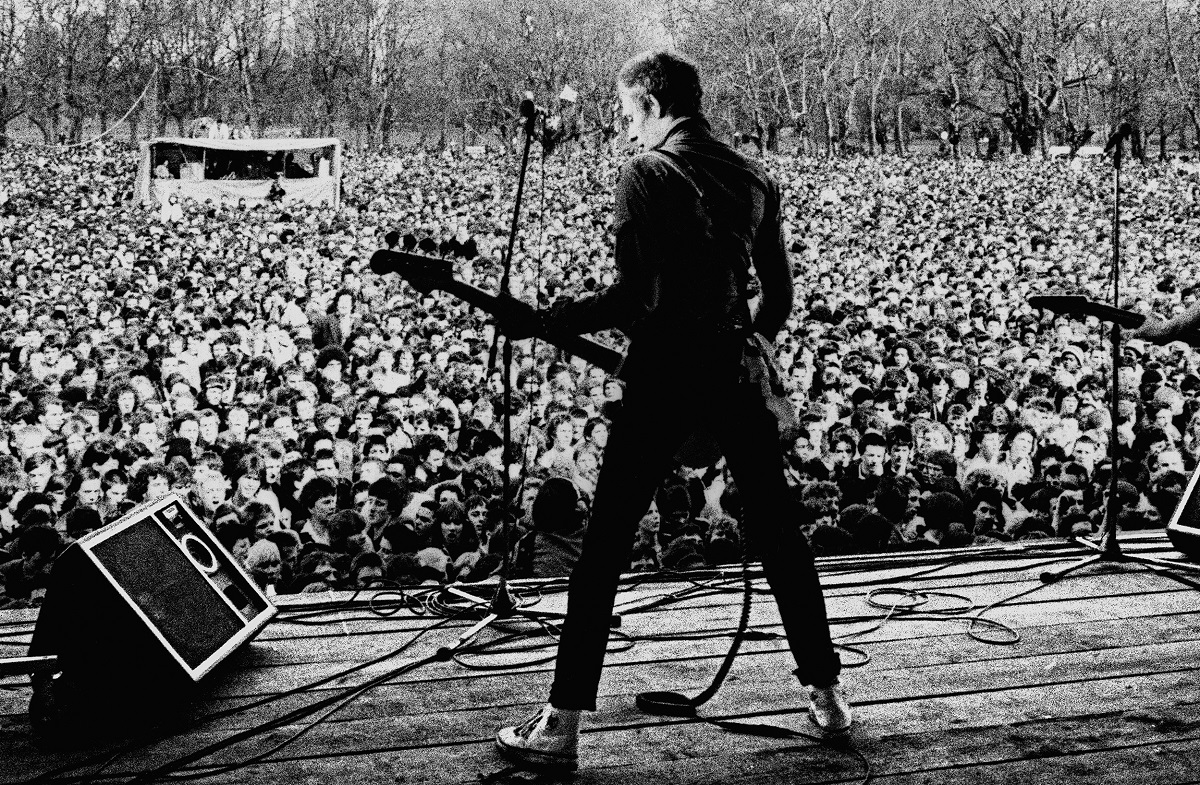 The huge ‘leisure’ centre space the site for random attacks from wandering skins. The Specials, then known as The Coventry Specials and fronted by a long-haired Terry Hall, made an impressive opening act and lightened the mood. They included a skinhead-placating version of Liquidator, but were clearly unsettled by the confrontational vibe. In his book Ska’d for Life, Horace Panter writes that this gig was the ‘pivotal moment that formed The Specials and our anti-racist stance’.

US electronic duo Suicide inspired a largely hostile reaction, although me and my mates loved them, with Alan Vega facing down the haters until skins invaded the stage and he was physically beaten, and Martin Rev in enormous shades playing on anyway with disdainful New York cool until stopped by a randomly-present Jimmy Pursey who tried unsuccessfully to restore order.

Into this savage tension The Clash performed a high-octane set, with some inspired and unexpected moments of eclectic brilliance: recalling Police and Thieves segueing into Blitzkrieg Bop after decades still making the hairs on the back of my neck stand up. Between each song, angry voices bayed for White Riot, wanting some kind of racist validation from what they imagined the song to be about. Eventually it was played in the encore, albeit cut short due to excessive rioting.

So in 1978 The Clash were a band on a quest to carry the punk rock flame, watched intently by the music press, gathering a large and fanatical following, provocative combiners of politics and art, chaos and creativity unfolding around them, heroes of the careening drama that was ‘being The Clash’.

The Racket tell us about their debut headline tour, causing ‘chaos’ and coming from Widnes

After the blistering, this-changes-everything assault of the first album and the sustained attack of follow up singles Complete Control and Clash City Rockers, after the devastating brilliance of (White Man) In Hammersmith Palais, expectations of the second album were crazily high.

Give ‘Em Enough Rope featured the classic Clash lineup of Joe Strummer, Mick Jones, Paul Simonon and Topper Headon. CBS recruited Sandy Pearlman to produce the album, a notable US producer, manager and writer best known for his work with Blue Öyster Cult and The Dictators.

Recording and mixing happened in London, San Francisco and New York over a period of months, with an aim to achieve a cleaner and more commercial sound that would get the band heard outside the UK.

The cover art, depicting a dead cowboy being pecked by vultures, overlooked by a Chinese soldier mounted on a horse, undermines any idea that this would be an exercise in uncritical US-friendliness. 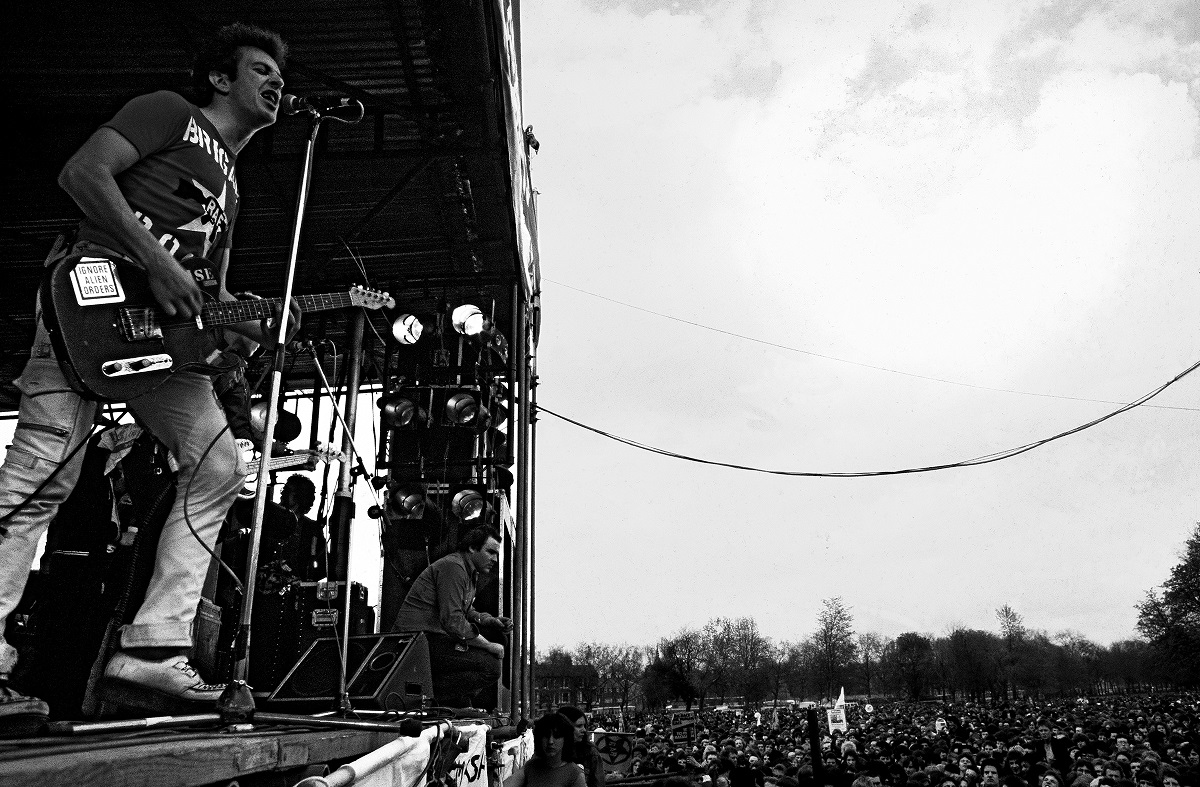 The album opens spectacularly with Safe European Home, the multilayered sound creating a mighty onslaught, justifying Pearlman’s claim that ‘there are more guitars per square inch on this record than in anything in the history of Western civilisation’.

Strummer’s voice is mixed beyond the horizon of comprehensibility apart from the occasional phrase, which is a shame as the lyrics are unexpected, the singer glad to be back from a trip to Jamaica, ‘Don’t want to go back there again’.

Rather than claiming easy credibility as outlaw musicians crossing into the land of reggae, the song reveals an actual experience of being in a place where ‘I’d stay and be a tourist but I can’t take the gunplay’. And there’s a twist buried in the backing vocals of the closing seconds; the ‘safe’ European home is also an ‘explosive’ European home.

Tommy Gun was the first single from the album, radio-friendly enough to break into the UK top twenty, one of those songs that suddenly appears as an unlikely choice in a background-music playlist in some supermarket or service station when it’s decades later and everyone from those times has grown up, or changed, or died.

Appropriately incendiary, the song conjures gun-wielding terrorists who through violence ‘can be a hero in an age of none’, simultaneously questioning and participating in the media amplification of their acts – it’s that Red Brigades t-shirt in a song, throwing out potent slogans more than answers.

As on many of these tracks the drums are mixed high and do a lot of the expressive work, and we get some blazing Mick Jones guitar work – the whole package becoming one of the band’s most memorable tracks.

Julie’s Been Working for the Drug Squad changes up the mood from death and destruction to ironic current affairs commentary – Operation Julie having been a massive drug-busting operation in the mid-Seventies. Comedic vision of the eponymous Julie tripping out as part of the undercover infiltration of a vast LSD business in a carnival arrangement with barrelhouse piano in the mix make for a fun few minutes.

Side One concludes with powerful rocker Last Gang in Town, a title that works as self-mythologisation of the band, the lyrics actually about the wasteful violence of gangs fighting each other. Skinheads, punks and rockers battle it out while a reference to a mysterious Zydeco-based gang adds a slightly surreal dimension of dodgy outlaw romance.

Guns On the Roof opens Side Two with an I Can’t Explain riff that is the highlight of the song. The production simply adds so much space that the song is expanded beyond its nature, any attack it might have had diffused.

Queasily, the title references a pigeon-shooting incident that had resulted in charges and fines for Headon and Simonon but the lyrics aren’t explicitly connected to that incident – it’s another song about terrorism and gun violence, reflecting that ‘A system built by the sweat of the many creates assassins to kill off the few, take any place and call it a court house’.

Without pause the record shreds into Drug Stabbing Time – rapid-fire cacophany, a sax overdub contributing to a rather muddy feel, lyrics inaudible but a catchy hook.

Stay Free, Mick Jones’ reminiscence of teenage friendship, adult growing apart and reconnection is a contrast to the rest of album. Often compared with Mott the Hoople, it’s an effective narrative song, with a lightness of touch that suits the personal, reflective material. Instead of headlines we get autobiography, instead of slogans we get recognisable details, menthol fags and drinking in the Crown. Even the overworked production can’t drown this fan favourite.

Cheapskates cranks up the noise again, moving into fully self-referential territory, going on the defensive against criticism that the band’s increasing success had removed them from their working-class roots. The complaint is delivered to listeners over a competent but undistinguished catchy punk anthem, with Jones’ full-throttle guitar adding pretty much the only element that one of The Clash-like bands of the time couldn’t manage.

The album finished with All the Young Punks (New Boots and Contracts) which sounds slightly celebratory but mostly wearily pessimistic, with a similar undercurrent of complaint to Cheapskates. It’s like The Clash finding themselves becoming elder statesmen of a movement that see no future for, and not liking it – an understandable viewpoint perhaps, but not exactly one that listeners can relate to. A dispiriting end. 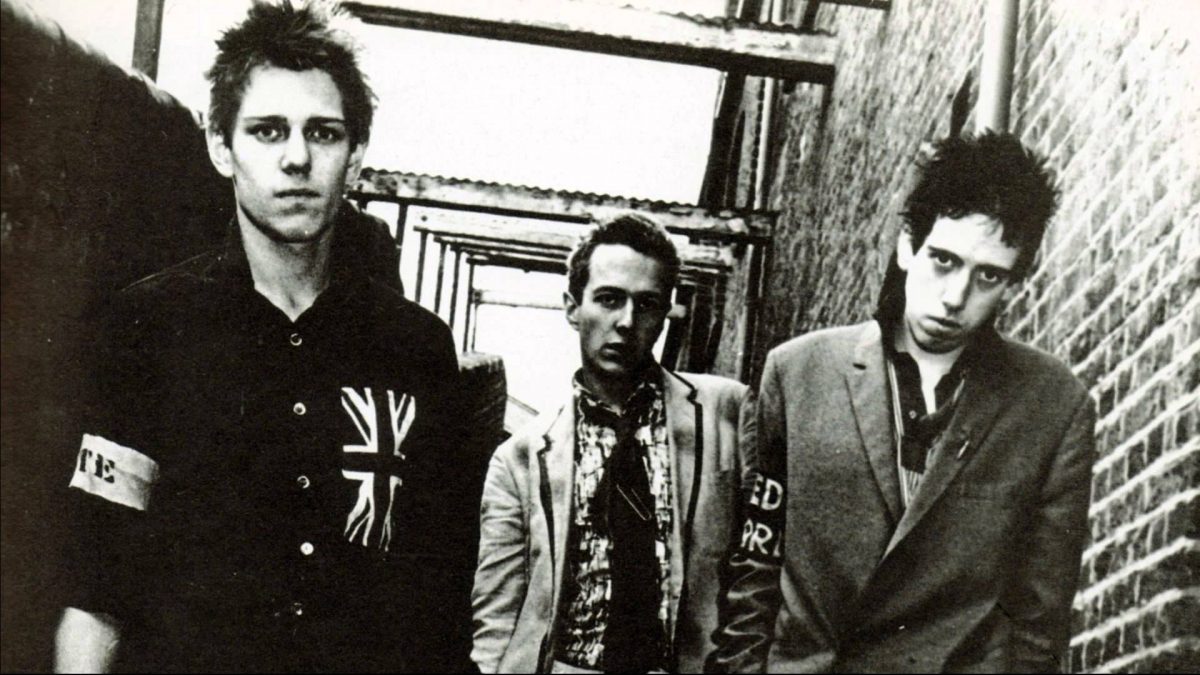 Despite some great songs it is hard to fully like this album. Talking the immediacy and spontaneity of The Clash and running it through lengthy and luxuriant production produces an uneasy mixture – like drinking Special Brew with champagne chasers. It’s The Clash doing a hard rock album – which isn’t quite The Clash doing The Clash.

Also, some of the material feels overstretched, becoming inward-looking, sounding tired. If this was the ‘bloody good rock band’ trailed by the NME earlier in the year it was a slightly disappointing one – and if this was to be the future, there was a danger that The Clash would become a lifeless replica of themselves, like those wild west outlaws that ended up stuffed by taxidermists and toured around in carnivals inside glass cases. Fortunately this was not to be the fate of band, who would go on to produce much of their greatest work.

But Rope did what it was meant to do, getting a decent level of US attention and commercial success in the UK, where it rose to number 2 in the album charts. Critics were broadly divided by the Atlantic. In the UK we had NME describing them as ‘a dying myth’ and Melody Maker stating ‘so do they squander their greatness’.

Nick Kent picked up on the ambivalent treatment of violence in the lyrics, writing that ‘One is never sure which side [the band]is supposed to be taking’, the violent real-world events they reference being used ‘as fodder for songs without caring’.

By contrast it was well received in the US – Lester Bangs saw ‘more evidence that The Clash are the greatest rock ‘n’ roll band left standing’, while Greil Marcus said that they ‘rain fire and brimstone – with a laugh’ and observed that ‘The Clash‘s attack is still fast and noisy (straight English punk), but with lyrical accents cracking the rough surface’. Where Nick Kent saw dangerous ambiguity, Greil Marcus saw an album ‘full of questions and honest doubt.’

Perhaps seeing the ‘questions and honest doubt’ in Give ‘Em Enough Rope is way in to appreciating this transitional album. ‘I’d like to think that we’re subtle; that’s what greatness is, innit?’ said Strummer in Rolling Stone interview early in 1979, distancing The Clash from ‘people preaching, like Tom Robinson’ who was ‘too direct’.

Not, then, an exercise in taking a particular side, beyond a general anti-fascist, anti-violence stance that Strummer believed ‘goes without saying’, but an honest attempt to ‘sing about the world that affects us’, contradictions and all.

The Last Gang in Town might be truly gone but the world of this 1978 album – filled with the violence of polarised groups, awash with potent ambiguous symbols, threatened with returning fascism, energised by an uneasy searching for identity and a place in the world – is the world of 2018.