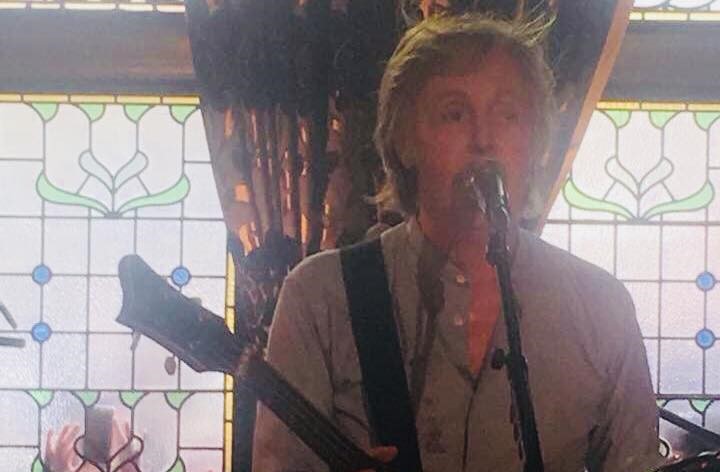 Paul McCartney performing a surprise set in the Philharmonic Pub

Paul McCartney causes pandemonium in Liverpool with a gig in Liverpool Philharmonic Pub and visiting his childhood home, Getintothis Father McKenzie on a fab day in the city.

Paul McCartney surprised music lovers with a return to Liverpool playing a secret set and parading around the city centre.

Playing in front a crowd of just 50 people, The Beatles star played a set list which included Love Me Do, I Wanna Be Your Man, Back in the U.S.S.R, Birthday, I’ve Got A Feeling and Hey Jude.

He was also spotted filming in the city on Saturday alongside James Corden – taking a selfie with his own Beatles statue at the Pier Head.

The two stars were then seen in a car on Allerton Road, where they were understood to be filming for the famous Carpool Karaoke segment of Corden’s US talk show The Late Late Show.

In the last few days, McCartney’s Instagram feed and profile picture has been deleted, leaving his page completely blank.

His Twitter profile picture has also been removed, leading to speculation McCartney could be gearing up to release new music.

The Beatles at 50: Merseyside music on the Fab Four’s best tracks

Last month, McCartney was made a Companion Of Honour for his contribution to music. He is only one of a few musicians to receive the honour, including Vera Lynn and opera singer Janet Baker.

Other recipients include Stephen Hawking, Judi Dench, and J.K. Rowling.

SO ME AND @Iadymccartney JUST STUMBLED ACROSS A SECRET PAUL MCCARTNEY GIG AND WAITED FOR HIM OUTSIDE
WHAT
THE
FUCK ALWNSKWNSKWNSJ#liverpool #PaulMcCartney #thebeatles pic.twitter.com/BkyHY5kmhv

Sir Paul McCartney is spotted in Liverpool! The Mac is back! ✌️ pic.twitter.com/ZpFkj2TRj4

My head has fallen off. Just seen Paul McCartney play a gig to 50 people in the Philharmonic pub in Liverpool. Absolutely made my life. Thank you for the music Paul . The Beatles X X X pic.twitter.com/tYuDCdArNJ

Paul McCartney and James Corden spotted taking pictures in front of the Beatles statue at Pier Head in Liverpool this afternoon. @PaulMcCartney @JKCorden

Crowds outside the Phil pub because apparently Paul McCartney is inside doing a private gig, according to a member of the crowd. pic.twitter.com/rZqW0rOaDM

Paul McCartney is posing with his statue in Liverpool,like right now. With James Cordon. Can anyone say “Carpool Karaoke”? 🎤 ❤️ pic.twitter.com/LELh8VsIiw

Surprising Who you find on your doorstep on a Saturday afternoon. The joys of living near Penny Lane. Amazing to see @PaulMcCartney showing @JKCorden around his home town two superstars outside @sgbsalon on a random afternoon pic.twitter.com/jYNez8GDyK

Paul McCartney and James Corden spotted on a surprise visit to Pier Head in Liverpool this afternoon by shocked fans! @PaulMcCartney @JKCorden