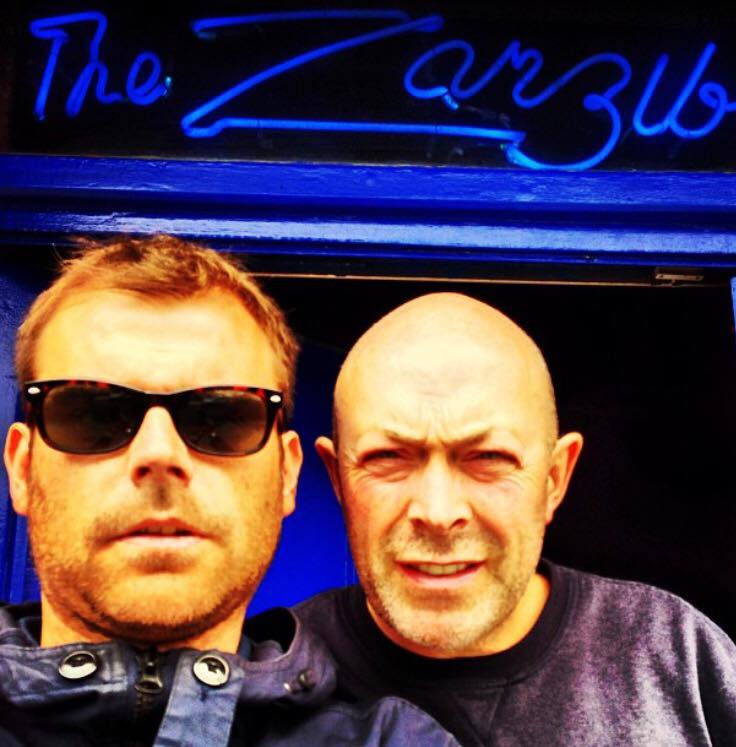 Tony Butler (right) and Nicholas Otaegui outside the Zanzibar

Tony Butler, man what a fella.

So sad to be writing this and didn’t think I should, but Getintothis thought it would be worth it, so I’m having a go.

I want to firstly pass on my thoughts, love and condolences to Tony’s family. He was a great, great man.

I was really emotional yesterday when I heard the news off my mate, another Liverpool musician my age, who obviously has the same love, respect and admiration for the man.

For my generation of Liverpool musicians, it ALL started in The Zanzibar.

I played my first shows for every band I’ve been in, in ‘The Zanzi’.

It was the only proper venue where you could play. No need to pay and shift tickets like other arl arse promoters would push on you back in the day. And if you brought people through the door you got paid well.

That was Tony’s ethics. Get off your arse, get out there, get playing and give it all the respect it deserved.

Make it special, and you’ll get it all back!

Not interested in keeping in with all the hipsters and shakers, he was a truly independent man and the venue, with its open door policy for young musicians is an institution, has helped an army of us dreamers across Merseyside immeasurably.

I met Tony in Heebies for a very early Maybes? gigs, around ’97 I think it was.

He was blunt, honest and such a character.

Animated, and at times, for a kid, intimidating. But pure heart and Scouse wit.

From just down the road from where I grew up, he was always familiar. He never changed. I’ve had the good fortune to know him for 20 years.

I’ve argued with him, been lashed out the club by him, shouted at and buzzed off by him for being a young upstart.

All from the right place though. He’s also dragged me out the rain on Seel St and given me a towel and a coffee to warm up.

Offered direction and faith to carry on playing when my heads been up my arse.

The support he showed all the bands I’ve been in both financially and with encouragement goes way beyond.

Always energetic and always on the money. Over those two decades he was always the same and always stuck by his ethics.

The Bandwagon, Noel Gallagher and the greatest nights at The Zanzibar

A man of principle, a stubborn get, with loads of love.

I’ve read so many heartfelt stories and boss words, from people across Merseyside of all ages, singing his praises over the last 24 hours.

Totally deserved and on the money.

Funny thing is he wouldn’t have liked it.

In fact it’s the type of thing he buzzed off. Never wanted the attention, any spotlight.

No faff or bullshit with Tony. He was all about getting the job done.

He’s backed and supported so many bands I know, and countless more I don’t. He never got any praise in the local media, he wasn’t about that.

He probably told most of them to fuck off somewhere along the line anyway, as they didn’t get behind the club and youngsters, unless there was a fanfare to jump on to.

One example of Tony’s independence and respect for local music, was when he was so pissed off with the “Mathew Street Festivals” line up not having any local bands on in 2007.

He put on a free gig all weekend, over the three days, full of local bands. It was chocka and I played one of the best gigs of my life. For extra measure he called the whole thing “NOT THE MATHEW STREET FESTIVAL”. Brilliant.

I went the club last week to watch Silent-K. First gig back in there for a while. Tony wasn’t on the door.

Andy and big Paul were about as usual; hugs, smiles and good vibes as ever.

The venue still sounds great and the atmosphere for a show was superb.

Murals up all over the place celebrating all the bands that came through the doors over the years. Loads of familiar faces around. But no Tony.

Paul grabbed me at the end of the night and put me on to the situation and that I needed to call up Tony and check in.

I didn’t get the chance. I’m gutted, man.

His voice, with his own special choice of words and excellent use of profanity has been buzzing around my head for the last 24 hours.

What a character. An ambassador. A scene stealer. A gent and a true Scouser.

Fuckinell Tony, I miss you mate.

Thanks for everything, you belter.

Peter Guy on The Maybes? and what the world was waiting for