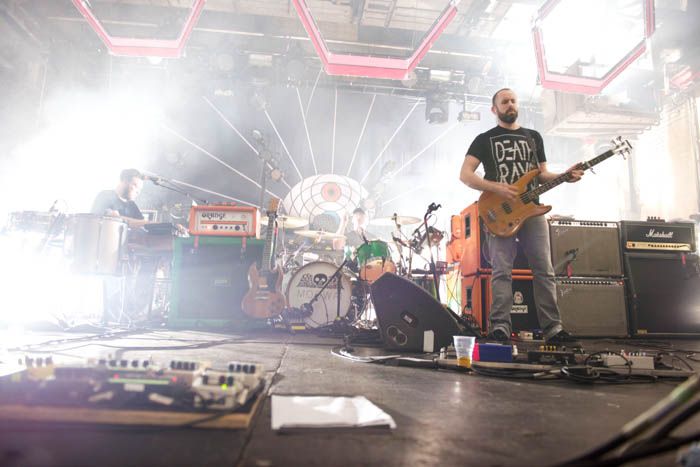 Ahead of their Liverpool show, Mogwai submit to Getintothis‘ latest 13 Questions.

Mogwai are a strange but enthralling prospect.

Their music can be both intricately subtle and punishingly powerful. Their latest album, their 11th, is a soundtrack to the film Kin. It is no surprise that Mogwai have gravitated to providing music for films, their songs have long had a cinematic, widescreen feel to them. A bonus is that Kin has followed less than a year on from their incredible Every Country’s Sun album.

Now with a core of Stuart Braithwaite, Dominic Aitchison and Barry Burns, Mogwai have been plowing their individual furrow for an incredible 27 years. In that time they have created a run of albums that take in the extremes of music, from fragility to fierceness, often in the same song.

As the band prepare to play the Liverpool Olympia, Getintothis sat them down and asked them 13 questions:

1. Where are you and what are you doing?
I’m in my studio in Berlin and I’m writing music for a TV show while trying to squeeze in a remix for someone.

2. What’s your first memory?
Looking up at round airplane windows when I was two years old on a trip to South Africa. I have around 3 or 4 memories of that trip and then nothing until I was about five.

3. Recommend one band or album that you think we should check out?
De Rosa from Glasgow. Those albums improve over time.

4. What would be your final meal if you were on Death Row?
Anything horrifically spicy from south India.

5. What is your favourite film?
Superbad. I am not sophisticated and I like fart jokes.

6. What was the first gig you went to?
The first one I went to without parental supervision was The Inspiral Carpets.

7. Where did you last go on holiday?
North Cyprus. It’s not really a recognised country, I highly recommend it, been there 5 or 6 times.

9. What’s your favourite season and why?
Probably Autumn but it’s close with Spring. I suppose I don’t like the seasonal extremes of Berlin and those two seasons are a wee bit magical. The summer is horrendously warm and the winter can be Russian-like but you can get stuff done in Spring and Autumn

10. Tell us a secret…
If I ever get an email from someone dead famous I print it on A2 paper and sellotape it above my bed. That might not be true.

11.  Do you have any pre-gig superstitions?
No. I worry that I haven’t had just the right amount of alcohol sometimes.

12. What’s a common misconception about Mogwai?
Despite constant evidence that we’re a bunch of actual morons, some people think we take things a bit seriously.

13. Do you have anything else to declare?
I don’t really get emails from famous people.