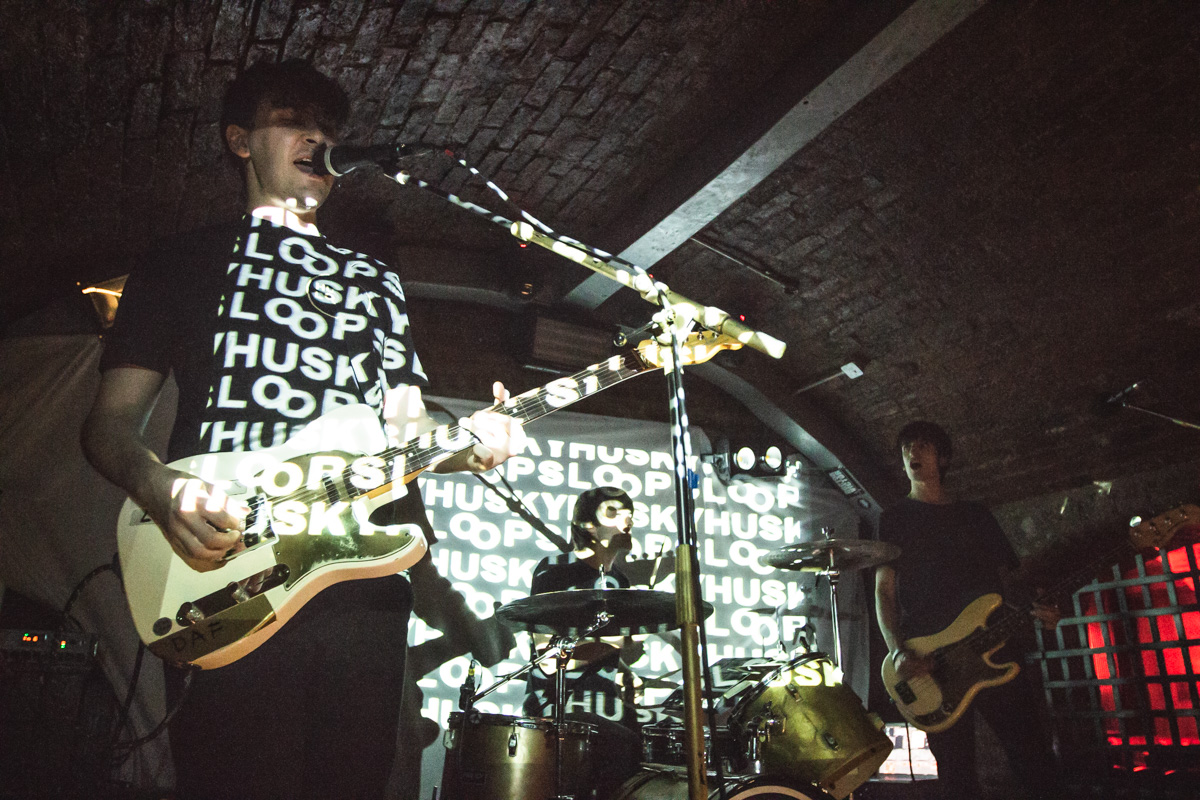 Husky Loops bring their sights and sounds to EBGBs and Getintothis’ Lucy McLachlan is there to take it all in.

London/Italian three piece Husky Loops have graced Liverpool’s stages a number of times already this year, with their last show at Sound City 2018 notoriously cut short due to the Blade Factory stage running over.

It seems fitting that they are back for more and just when we thought a venue couldn’t get much darker than upstairs in the Baltic Triangle the deep depths of the EBGBs basement topped that with a pitch black cave.  Husky Loops arrive in EBGBs riding high with single Everytime I Run being featured in the new FIFA ’19 video game soundtrack and a new video for the same song released the day of the gig.

We arrived to Paul Iwan, a Liverpool multi-instrumentalist, his sound was 90s drum beats, with a laptop and guitar. He was a one man band apart from live drummer ‘Steve‘ and had most heads turned and already nodding away.

We guessed that the majority of the crowd were here for other support bands. It was a younger vibe, almost like a school prom, large groups gathered against walls drinking Hooch and we’re wondering who’s going to be sticking around for Husky Loops because people have turned up suspiciously early for once.

Forrest brought half the crowd it seems. The theme appears to be early 2000s rock, the laid back vocals remind us of Ash but with shoegazey jangly guitars.

As one band clears out with half their mates from the crowd the next one comes in with theirs. It feels like the audience has completely changed and aged a year at uni. We’re still looking for the people who might stay for the headliners but we’re not sure who they are right now.

Rivia bring more old school 2000s rock, this time sounding like The Calling meets Alien Ant Farm. It’s their very first gig and their songs sound straight out of a 2001 coming of age film. At the end of their set they acknowledge that the crowd made up of mostly their mates have never heard of Husky Loops and should probably stick around to hear them.

After quite a while in the cold EBGBs basement, our main band finally appear, as if taking the piss that the majority of the audience weren’t necessarily there to see them, their name was plastered across projections, the drum kit and even their t-shirts. If you didn’t know who Husky Loops were at the start of the show, you definitely did by the end.

It seems the band have a small loyal following, which would make sense as they have already played Liverpool three times this year. The crowd knew songs like Fighting Myself, When I Come Home and after quite a bit of coaxing from singer Danio, even shuffled to the front of the stage.

Husky Loops always pull off a decent show visually, there’s a look to the projections and lighting right down to the instruments and mic stands spray painted gold and standard indie issue black clothing that makes everything look so industrial and carefully put together. Much like the music.

It’s hard to pin point a musical style for Husky Loops which is probably a good thing, on one hand the samples and fuzzed out attacking bass lines can be a bit Nine Inch Nails, whereas the addition of a voice changer brought Danio‘s vocals down a few octaves lower for a more hip hop sound.

It’s a sound that’s constantly changing and evolving, just like the projections swirling around them. From mash ups of people running in films such as Ghostbusters, the Breakfast Club, Forest Gump, Rocky and loads more to stills of a washing machine dumped on the pavement you never really know what you’re going to get. And we like that a lot. 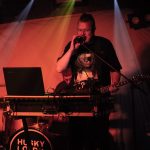 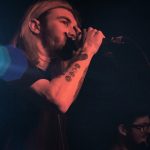 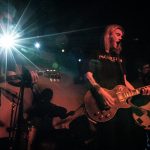 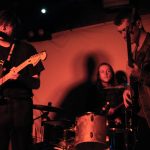 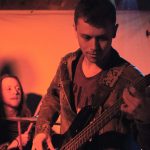 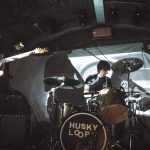 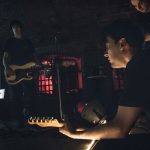 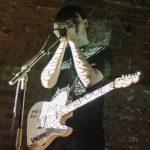 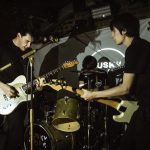 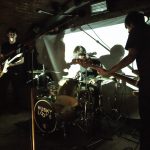 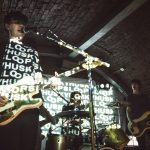