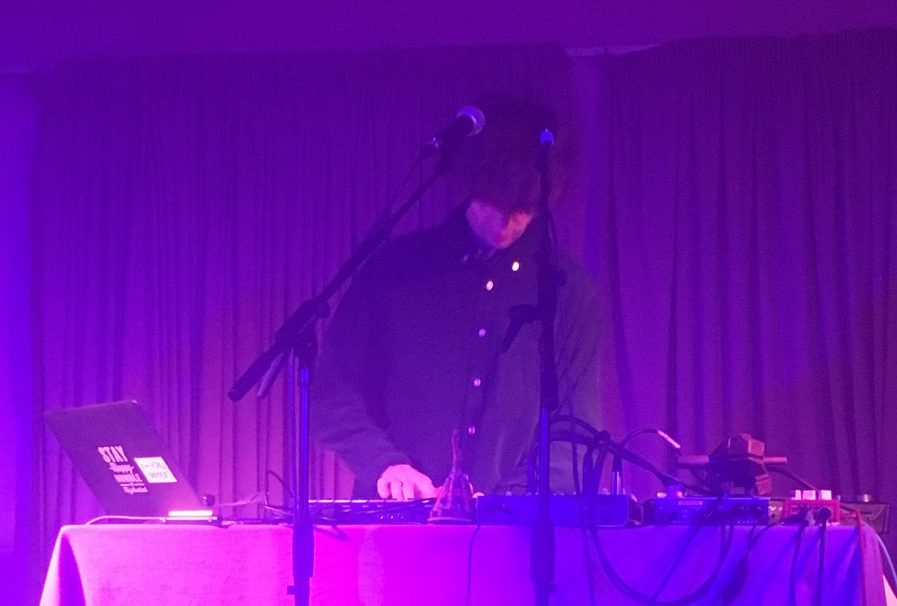 Cosmo Sheldrake at The Pink Room

Cosmo Sheldrake came to Manchester and Getintothis’ Will Truby was there for an evening of bird calls, computer crashes and the sounds of the sun itself.

The uppermost room of the fairly new Manchester venue YES, The Pink Room, is certainly the most accurately named venue we’ve ever come across.

By comparison, the 100 Club fits about 350 people, The Deaf Institute is not particularly accessible, The Zanzibar is an awful lot colder and dingier than its namesake country. But upon entering The Pink Room, you are met with exactly what it says on the tin: a square room of Calpol walls and soft baby pink lighting.

First up is the Norwegian three piece I See Rivers, who bring a cosy vibe to the cold November evening with their home-brew folk-pop stylings. The Pembrokeshire-based band perfectly execute three-part harmonies, intricately weaving in and out of each other, with a synchronicity you’d normally find in musicians decades their senior.

They perfectly blend danceable indie pop with heartwarming folk in I Don’t Know, and after teaching us the Norwegian for cheers (skål, in case anyone was wondering), the band incite a raucous and emotional singalong to the final song, Play It Cool. With the entire room basking in the warm glow of I See Rivers’ cosy folk pop, Cosmo truly couldn’t have asked for a better warmup act.

The atmosphere of a packed out Pink Room suits Cosmo Sheldrake just fine as well, with its air thick with smoke and soft undulating blue and pink lights.

Attending a Cosmo Sheldrake gig is something akin to a TED talk mixed with live music. He prefaces most songs with detailed explanations of their origins, ranging from absurdist poetry in The Moss to the sixth age of extinction in which we now find ourselves in Pliocene.

You’d be forgiven when seeing Cosmo’s setup to assume he is a DJ – the stage is bereft of acoustic instruments, with only a table laden with electronic gear. However, he is something of a looping wizard, utilising not much other than a bank of peculiar samples and his vocal techniques to create his songs.

These samples are weird and wacky in origin; a cow carcass, tropical birds, cold war recordings of marine biology, the frequency of the sun’s light waves sped up, and his godson’s first hiccup.

here is a really old song (from 2013!) i made with a friend of mine J.D Eidse on an iphone on a british columbia island. today she decided to release it on spotify, apple and more. some of you may know it already
'i threw a rock into the sea'https://t.co/dLwOqdmaAW pic.twitter.com/TMQ4T9ZK5C

A technology malfunction becomes a turn of good luck for us, with Cosmo treating us to 3 improvised pieces while simultaneously rebooting his laptop.

There’s no absent-minded noodling or extended solos here; he is a he quickly and carefully layers stacked harmonies, glitch sampled drumbeats and scat singing to create all sorts of genres. This is part of what makes seeing Cosmo such a treat, each performance is truly live in every sense of the word – you’ll never hear the same track twice.

Despite coming across as shy and bookish, he cheerfully responds to heckles and requests, and ultimately wins us over with a weird and wonderful show.