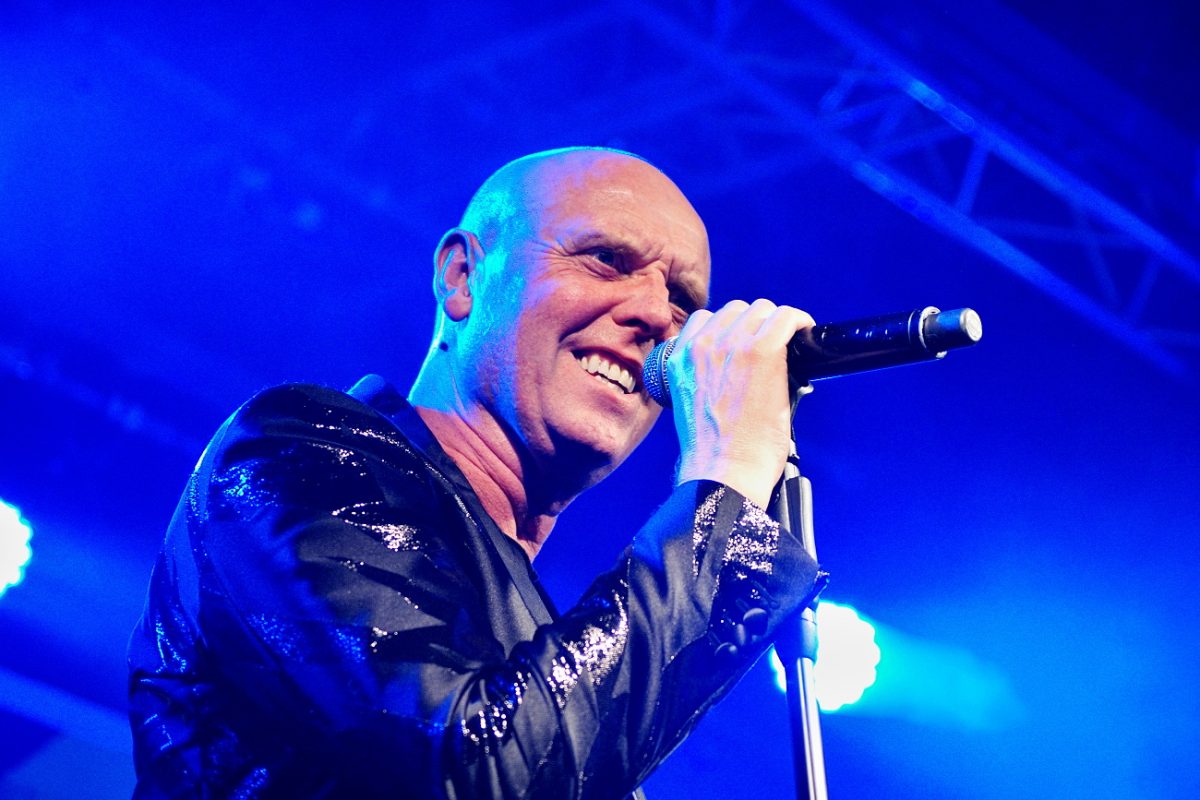 As one of pop’s busiest men Glenn Gregory takes time out to talk to Getintothis’ Banjo about what he is up to and why he keeps himself so busy.

Glenn Gregory is a busy man.

In the space of a few months, he will have played three gigs with three different bands in Liverpool alone.  Heaven 17’s last appearance in Liverpool saw a crowd reaction that almost blew the band off stage and the roof off the O2 Academy.

In February, he will be back at the Philharmonic with Holy Holy and then in March, he will be making a more intimate appearance at The Cavern with new band Afterhere.

Somewhere in amongst all this, he finds time to record soundtracks for film and TV.  Clearly, he is driven and an unstoppable creative force.

Thankfully he managed to find time in his busy work schedule to talk to Getintothis about writing, performing and why he loves playing Liverpool.

Getintothis: What is it that drives you to do all these things?

‘Well then main thing is that I like it, it’s what I do.  I don’t really have any hobbies, I don’t play golf or anything, I don’t have a TV and this is what I love doing.

In fact, Berenice and her partner are coming to ours for Christmas, and we wondered if we’d be able to get a couple of hours in the studio.  We decided it probably wouldn’t be a good idea, but that’s how I think, I’ve always got something I want to do musically.

And for years I’ve been involved in writing soundtracks for films and TV between bands.  I started doing tis with a friend, but it all started going wrong, he started getting very unreliable and drugs came into the picture.  So then I worked on my own for a while, but I missed having someone to bounce ideas off.  I started asking myself questions and that got worrying when I started answering them!

And, because my studio is at the bottom of my garden, I would just wander down there in my dressing gown.  My wife would come home and say ‘you’re not even dressed yet!’ and it wasn’t a good way of working.

So I asked Bernie if she’d be interested in some soundtrack stuff and she said that it would be a dream come true, so we started working together.

We had already been working in Heaven 17 for a while and then we were in Holy Holy together and we got on so brilliantly that I said ‘we should be in a band!’

And when we work together it’s so easy, we have a very similar work ethic and it all works so smoothly.  Every other time I’ve written music with someone it involves almost constant rowing.  I mean, Martyn [Ware, partner in Heaven 17] and I are great friends away from the band, but when we rehearse we’ll shout at each other – ‘it should sound like this!’, but with Bernie it doesn’t work like that, it’s a symbiotic relationship.  And she’s a great musician, she’s classically trained so she can do something in 5 minutes that it would take me 35 minutes to do.  And it will sound better! And she’s got such a great voice, she sings most of the songs on the album.’

Getintothis: That’s a brave and generous move from someone who’s primarily known as a singer?

‘Well I don’t have much of an ego and, truth to be told, I don’t much like being in the limelight.  I know I can perform on stage, but you’d be amazed at how many of these celebrity TV programs I turn down on almost a daily basis because I’m just not interested in being a celebrity like that.  I don’t even have a TV.  And if it’s better for the song, which it is, then I’m quite happy if Berenice sings it.’ 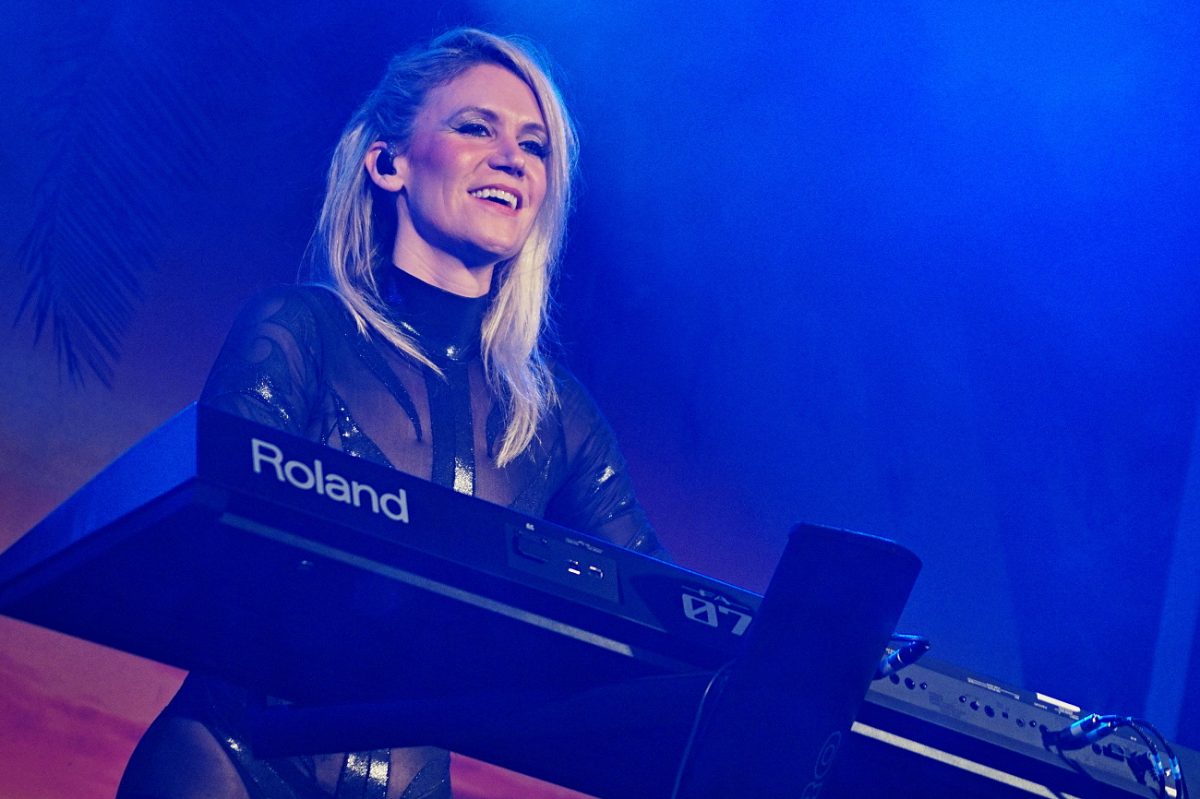 Getintothis: Why did you not have a TV, was it because you see it as a drain on creativity?

‘I’ve never really been a big fan of watching TV.  We had one for a while for my son, who is 15 now, 16 in February, but he never really watched it either, he’s always out on his bike.  Even as a kid he didn’t really bother with it.  So I asked him if he’d miss it and he said he wouldn’t, so we got rid of it.

It just takes your attention.  If I go to a pub or a bar and there’s a TV on I’ll ask them to turn it off, or I’ll get up and turn it off myself, because I didn’t go there to watch somebody else do something.  You’d be amazed at how much time TV can take off you, even if it’s just ten minutes here and there as you walk through a room.  No, I can recommend not having a TV.

I’ve got a couple of screens in my studio, for when we’re working on soundtracks, but apart from that, that’s it and I don’t miss it at all.’

Getintothis: The audience at your last Liverpool show was really loud!

‘They were, that was a great audience.  In fact, I think the whole tour gave us probably the best receptions we’ve ever had.  It’s just a great feeling being on stage when the crowd is like that, the energy from the crowd comes on to the stage and then you give it back to them and it becomes this great loop of energy, although it doesn’t always nearly take the roof off like it did in Liverpool!

In fact, for the last few dates I wasn’t feeling so good, I had a cold like millions of us do at the moment.  As we were heading on stage at Manchester, Martyn looked at me and said ‘you look terrible.  Are you ok to do the show?’ and I said ’yeah, I’ll be alright.’ And then when you get on stage the adrenalin kicked in and Martyn said later he was amazed at the transformation.

But you’ve got to perform and an audience like the one we had in Liverpool really lifts you.

Our 2nd ever gig as Afterhere is in Liverpool on the 7th of March and after the reception we got last time I couldn’t think of a better place to do it.  When the chance came I thought The Cavern would be a great place to play, and it will be quite different, it’s just me, Berenice, a lighting guy and a sound guy in a van.’

Getintothis: Going back to your roots

Getintothis: Or is it?  Did you do the whole living out of a van thing, because BEF didn’t play live for a long time.

‘Yeahhh, I did all that with other bands.  In fact, I was in bands with both Martyn and Ian [Marsh – founder member of Heaven 17] before they formed the Human League, some serious, some semi serious.

And then I headed off to London to become a photographer and Martyn told me he was putting a new band together called Human League.  He told me he didn’t know who to get in as a singer, but he was looking at a guy called Phil, who he used to go to school with.  He said he didn’t know if he could sing, but he had a great haircut [laughs]

So that’s one band I was glad I didn’t join, because I was a huge fan of Human League as they were.  In fact there is a book coming out in February of some of my photos of the Human League.  I was throwing out an old chest of drawers recently and I found a folder of negatives that had slipped down the back.  And when I looked at them they were all of the Human League.’

Getintothis: What can we expect on the next Holy Holy tour?

‘Well I’m back in Liverpool with them in February, so I must be drawn to Liverpool.

We’re doing The Man Who Sold the World and Aladdin Sane albums in full, in order.  So there’s going to be a lot of songs to get through.  But these are songs I grew up with, from my early days when I would go and see Bolan and Bowie live, so being on stage singing those songs with those people is a real honour.

And it’s a real band, there isn’t a laptop in sight and none of the music is on tape.  It’s a real rock band and they play loud!  Woody pounds his drums and I can feel the air moving when he hits those drums.’

And with that, we feel it’s only fair to let Glenn Gregory return to what he loves best, creating new music, rehearsing and working on his myriad projects.  It is hard to think of any other musician who has the drive, the enthusiasm and the ability to play three gigs in one city in just 6 months and with three different bands.

Music needs people like this, those who are driven to create, to shift and try new things and, above all, to get across their passion for the music they create. Hats off to him.