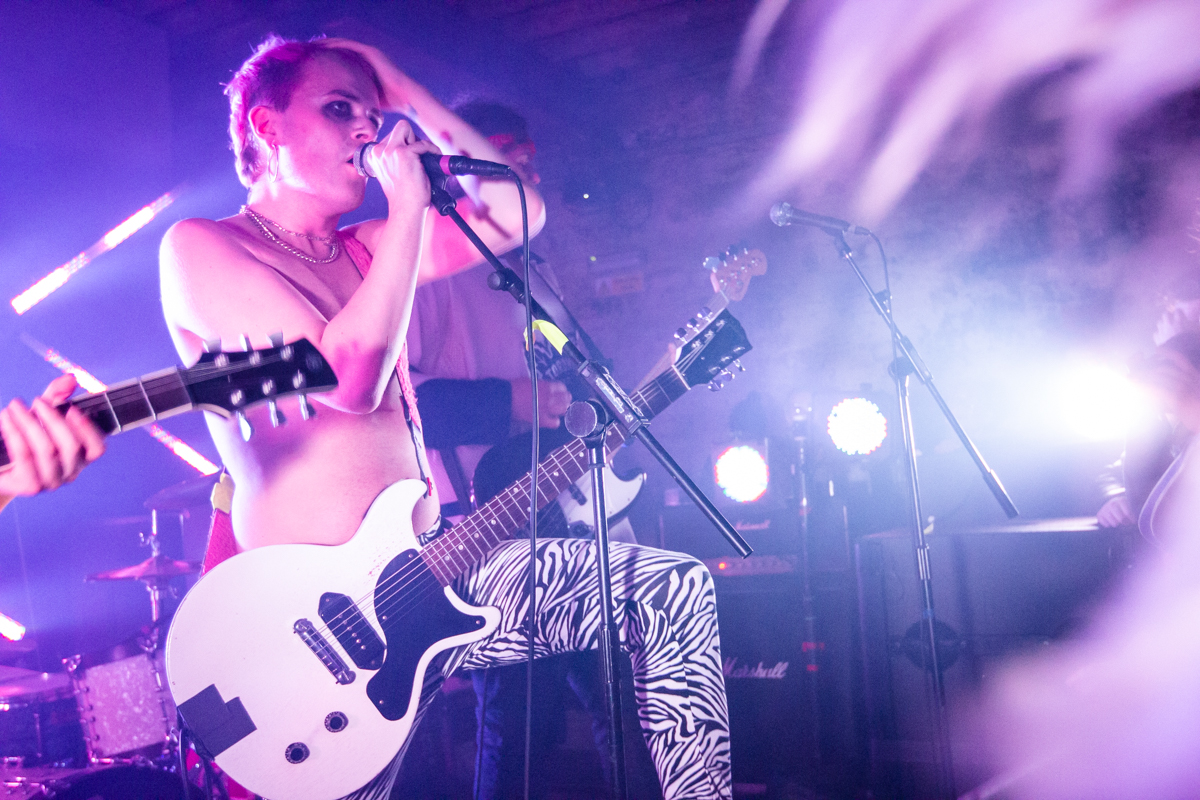 With their debut album ready for release, Getintothis’ Banjo spoke to Queen Zee to see what they might get up to in 2019

Queen Zee are more than just a band; they are a gang,  an unstoppable force, an antidote.

They are also 2019’s brightest hope.  We need a band like Queen Zee to shake things up, make people think and to challenge the mainstream.  It has been too long since we have had a band whose mere image makes them subversive and genuinely interesting.

Now all this may sound worthwhile, but a band also need to deliver killer tunes. Queen Zee have some of the catchiest songs you’ll ever hear and can put on a show like no other band around.  Live they are an unpredictable affair, where a stage is too small a space to contain them, where speaker stacks exist to be climbed and where the band are naturally dedicated to breaking the barriers between audience and band at every opportunity.

The debut album does a great job of capturing the energy and the attack of the Queen Zee live experience. They somehow manage to occupy a space between punk agression, epic pop and glam stomp.  First song Loner sets the scene, marrying full on RAWK guitar to a singalong chorus and a heartfelt lyric.  The ability to do this is Queen Zee‘s ace card, sing about what’s in your heart and make it so catchy people will be singing it into the night long after they’ve heard it.

Album highlight Idle Crown is just irresistable.  It has been a long time since we have heard a band who are credibly alternative (whatever that means these days) and can perform songs that could be equally at home at punk gigs and daytime radio.  This is not an easy thing to pull off, but to make it all seem so natural and effortless is jaw droppping.

Getintothis spoke to singer Zee Davine about.  Zee thinks about answers before speaking and provided us with an intelligent, likeable and immenseley quotable person.  There are pauses between questions and answers, as Zee formulates a response, rather than just blurting an answer out.

That said, when Zee is in full flow, ideas and sentences tumble out without pause, the enthusiasm that we see on stage is a natural part of Zee’s makeup, not something that is only worn when performing.  Even when speaking rather than performing, the star quality and charisma is so obviously there.

Speaking to Zee only serves to make me love the band all the more.

Zee: ‘Amazing.  Beyond what I could imagine.  People are reacting to the band in a way that I don’t think anyone could have predicted, it’s been phenomenal.’

Zee: ‘If it continued at the same rate I’d be blown away, but even if we did half of what we did in 2018 I’d be content with it.  What we’ve got planned already is shaping up to be pretty special, we’ve got the album and then a UK tour.’

Getintothis : At your last Liverpool gig, it struck me that there was a new crowd there and I went away from that gig thinking that something was happening, that Queen Zee are perhaps starting a whole new youth movement.  Does it ever feel like that to you?

Zee: ‘Bizarrely yes.  I feel like we’re one of those bands who have played with so many other bands and played so many festivals.  Like we’ve opened for death metal bands like Venom Prison, and yet we’ve also played festivals where we’ve shared a stage with Mel C and Noel Gallagher.

We’re a bizarre band in that way, where we can kind of fill a gap, and what I think people have responded to is the energy of the band.  I think we see that a lot in Europe, very rarely when we play a European festival do we play with another guitar band, we’re normally playing with a DJ or we’re playing in queer clubs and so on.

It’s about the energy and the connection and I think that’s what people are responding to.  Guitar bands these days seem to be focusing on the drab, minimalist, indie, reverb-soaked guitar sound.  And it’s very cool, but I don’t really want to be cool, I want to connect with people.  I think that’s what DJs have been doing for the last 20 years and bands haven’t kept up.  There are a few bands, our friends’ bands and what we’ve done has met that head on.’

Getintothis : I think this was the case at LIMF last summer.  I was sat by the local bands stage and as you say, there were a lot of bands like that.  I’m not saying they were bad, but they were just standing there and playing and then Queen Zee came on and the energy and intensity level just shot up.

Zee: ‘Well I’m there to do a show and I’m going to do a show.  I have absolutely no time for someone who rocks up in their shit jeans like they’ve just pulled a shift in a bar and then gives it the same energy they would to pull that shift in a bar.  It shouldn’t feel like that, it should be an escape.

Our fans are so passionate and they’re so dedicated to us they travel to see us.  We had fans fly over from Ireland to go to that Liverpool show, so it would be a disservice to them to not give our energy and not give our chaos to them. ‘

Getintothis : I don’t think I’ve seen you yet play on a stage that is big enough for you, you run around and climb up the speakers and jump into the crowd.  Is there a stage big enough for Queen Zee?

Zee: ‘No.  I’m hoping the Glastonbury main stage might offer more of a challenge, but I’ve got to get there first.’

Getintothis : But do you think Queen Zee would suit being that sort of mainstream band, or do you think you’re more effective working from the outside?

Zee: ‘The whole philosophy of Queen Zee was to bother the mainstream, to take the politics and the ideas and the ethics that were very much fringe and were very much confined to the punk scene and to go and preach them to the people that need to hear them.

I was watching these queer bands and these LGBT bands talking about their politics to a room of 20 or 30 punks who completely agreed with them and I thought that this idea isn’t getting anywhere.  If you look at Brexit and the rise of the far right, we’re living in this social media bubble where we’re kind of talking to ourselves and we’re deleting people off Facebook if we don’t agree with them, so we kind of live in this echo chamber.

Queen Zee is all about breaking this echo chamber and saying that we’re going to play on a main stage to people who might not like what I have to say, but if ten or twenty or a hundred or a thousand heard us I’d feel like we’d done our job.  I feel like it’s our duty to become a mainstream band.’

Getintothis : At that last Liverpool gig, some of the support bands seemed to have a similar sound, whether that’s a Sass Records sound or whether that’s you inspiring people.  If there was going to be a new scene around your music, what would it be called?

Zee: ‘We were jokingly calling stuff Sass Punk, but that kinda makes me feel a little bit sick now.  There was a movement in America that was called Queer Core, all these queer bands coming together around Chicago and Toronto, and we called ourselves Queen Core. Maybe Queen Core can make an appearance.’ 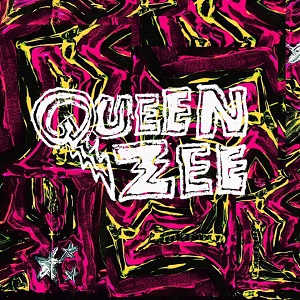 Getintothis : Musically where do you draw your influences from?

Zee: ‘We’re all over the place, I don’t think we know ourselves to be honest.  We all like different stuff, we’ve all come from different scenes.

I’ve grown out of Liverpool’s punk scene, whereas Jay was much more of a metal head, Frank was in a hip-hop group, Dave was in an indie band, Ash loves pop music.  There are a few bands we all agree on, we all love Iggy Pop and The Stooges.  To get that nod from Iggy last year was massive for us.’

We love a lot of the old punk bands, like The Damned and The Cramps and that kind of gnarlier edge.  But at the same time Prodigy are in my top three, Beastie Boys are up there, we all love reggae and hip hop’.

Getintothis : And lyrically where do you get your inspiration from?

Zee: I like a lot of nonsense poetry, Edward Lear is a huge influence.  He wrote this nonsense and children’s books that I really love.   I love John Cooper Clarke and that rapid fire that he embodied.  And then I remember listening to The Misfits as a kid, and some of the lyricism grossed me out, and that fed a little bit into what I do as well.’

Getintothis : It’s fitting that you like a lot of the early punk bands, because you seem to have been adopted by the older crowd, such as playing at Doreen Allen’s birthday, and they’re still picking up on the energy and the youthfulness that you have.

Zee: ‘I love it because these are people who have seen it before, they know what’s real.  I say this all the time about Liverpool, playing in Liverpool is a hard gig because it has such a rich history.  Someone like Doreen who had Dead or Alive and Frankie Goes to Hollywood play at her birthday party before, you’ve got to be good.

And there’s a lot of punk bands at the moment where it’s almost like punk cosplay, dressing up as punk bands rather than embodying any of its ethos.  So to get that nod from people who were there, who’ve seen Iggy, people who’ve seen The Damned and The Cramps is amazing, it does kind of blow our minds.’

Getintothis And how rock n roll are you when you come offstage?

‘Zee: It depends on the day.  Sometimes we’re very rock n roll and I’ll get taken off on a stretcher and have my face put back together, but then most of the time you just want to sit down and have a cup of tea.  Particularly when we do these big tours like the one in France.

There was a great one where we had driven for 12 hours to get to the venue and there was this band from New York playing with us who were like ‘let’s go out! We’re from New York, we’re never going to see each other again, let’s do it!’ and I was like ‘Guys, we’re going back to the hotel and having a cup of tea’ and we did, three of us in a double bed, had a cup of tea and no partying.’

Getintothis : Do Queen Zee have an Agenda?

Zee: ‘Probably just to continue to irritate everyone.  All the time.  [Laughs]’

Getintothis can think of no finer ambition and no band more likely to pull it off.  Let Queen Zee get under your skin at your earliest opportunity.  Before they take Glastonbury’s Pyramid Stage by storm.