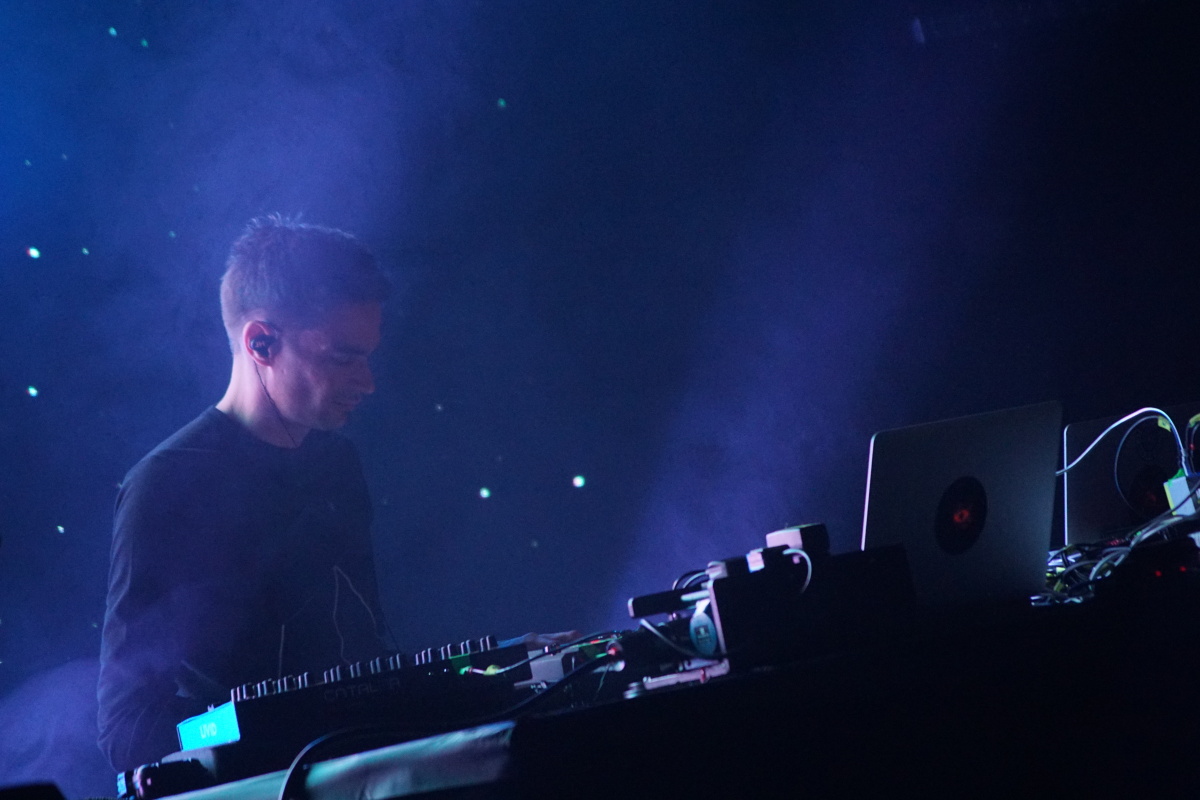 As the juggernaut that is the 6 Music festival rolls on Getintothis Chris Flack found himself at Mountford Hall at a ridiculously early hour to be faced with something he wasn’t entirely sure of.

It’s safe to say that the reports from the 6 Music Festival have been healthy, to say the least

We’re on day two at Mountford Hall and have been given the wildly unhealthy checking time of 5pm to catch three acts bringing their wares to the city in the name of old Aunty Beeb.

Five O’ Clock in the evening is a ridiculous time to check in for any gig but given the madness that is likely to follow at the Invisible Wind Factory it’s our guess that they’re hoping most of these punters make their way to the docks as soon as this one wraps up, if any of them can manage to flag a taxi down of course.

Given that our very own Craig Charles is headlining this very night there is every chance a number of them will make the trek, even if it means actually making a trek.

This evening’s entertainment comes in the form of Jon Hopkins, Little Simz, and Slowthai, and it is Slowthai that has the dubious task of warming a crowd up at the ungodly hour of 6.15.

Slowthai, real name Tyron Kaymone Frampton, hails from Northampton and has become the darling child of more than a few publications.  Given the love for him all over the place and the talk of politics, anarchy, and anger it’s fair to say we were looking forward to whatever he had to bring to Liverpool.

When we arrived at 5.40, there wasn’t a single person in the room, and talk of just 800 tickets sold, an interesting start at any rate, especially if you’re first up. By the time Slowthai hit the stage, there were about 300 people in the room so it probably wasn’t as mental as he was hoping for. Tough gig that.

@slowthai into the audience 🙌 #6MusicFest pic.twitter.com/KPT7XJ1ReZ

So tough in fact that Slowthai seemed a little out of his comfort zone, perhaps the hour and the slightly clinical feel of the room at this hour threw him. He decided that his rap and drum and bass heavy set was better delivered right in the middle of the room, and that brought more than a little magic to proceedings.

It certainly did a number on both the camera crew and any of the punters near the front. For a second everyone seemed to panic.  That’s how you do it to be fair, keep everyone on their toes.

It was a bass heavy, politics-laden, thumping set that was all too short, the man was just getting warmed up as the imaginary hook appeared at stage left. Not quite our vibe in all, but he gets 10 out of 10 for sheer delivery and conviction. Well played young man, well played.

Little Simz was next up just as the room was starting to fill up. She has come a long way from her days as Vicky in CBBCs Spirit Warriors or as Meleka on E4s Youngers, a long way indeed, given that she has worked with everyone from Ms. Dynamite to Tinie Tempah, CBBC that is not. She has been hailed by Huw Stephens over the last few years and created quite the hype with her third album, Grey Area, released at the start of this month, there was quite the sense of anticipation as she took to the stage.

Her set was bass heavy, floor rattling, ass shaking, arm waving Jamaican tinged thumping rap, and it was joyous too.  The room filled up pretty quick and most of them were very obliging on the arm-waving front, which is always a bonus when punters do what they’re told. Where we were there was a lot of dancing, whooping and cheering, clearly, a few of the punters had come here for this.

She seemed to be having an absolute ball on stage, the faster she rapped the harder the dancing and hollering in the room. A lot of her music is about living, love and the lingering doubts we all have, there was even a snippet of social justice and truth thrown in for good measure and that is alright by us.

Though it should be said, Little Simz needn’t have any doubt about tonight, she brought it all, tons of energy, a tight band, some superb sampling, and buckets of energy.

Pardon my desperate beg(nezz) but I travelled to Liverpool to see this one @LittleSimz and she did NOT disappoint. Smiling like the Cheshire Cat. #6musicFestival #littlesimz pic.twitter.com/vlo5xreOtX

The final act and the one most people probably came along for was one Mr Jon Hopkins, taking to the stage at the frankly unreasonable hour of 2100 hours.  Hopkins appeared on the scene in 2001 with his first release, Opalescent, given the age of the supports this evening he practically a geriatric. Like ourselves.

Five albums in and Hopkins crown remains unblemished, Opalescent received rave reviews and managed to reach the top spot of the Indie and Dance charts. It was clear from the off that he meant business.

If we thought that the bass from Little Simz was hard hitting we clearly hadn’t considered Mr. Hopkins. The BBC6 crew had completely rebuilt the stage from the floor up, leaving only decks and an assortment of Hopkins tech and a shed of strobe lights, unsurprisingly both were put to the test.

Hopkins delivered a set of solid gold oldskool house and rave, it was precisely the kind of set this crowd had come to hear. They couldn’t see much of him to be fair as he was in utter darkness for most of the set.

We found ourselves trapped in the old ravers’ corner and while the sheer force of the bass bins drove away the lightweights at the front, the rest partied hard, it was utterly infectious too. He played for the best part of an hour and delivered a punishing level of guttural bass throughout.

We were here scouting the venue out for a conference not long before Christmas and the University maintenance team had lifted a significant section of this floor up.  If any of them happen to read this, we would suggest they have a quick whip around and check everything again.  And possibly have a look at the plaster too.

While this is not normally the kind of night we would normally entertain, the mix of talent, politics, unbridled joy and sheer abandon left us wanting more. We left the Mountford Hall looking for taxis and tickets. We were, as you might imagine, Invisible WInd Factory bound. With everyone else. 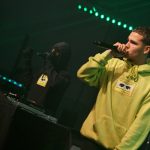 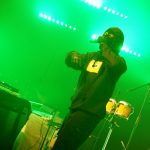 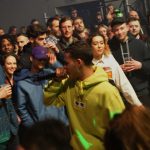 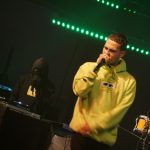 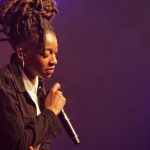 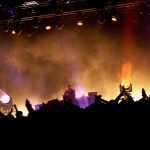 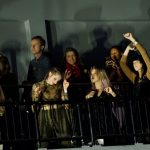 Ravers in the balconhy at BBC6 Music Festival 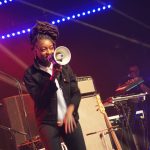 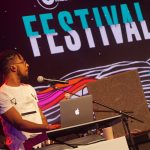 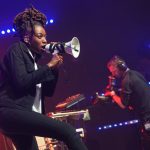 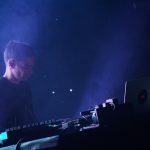 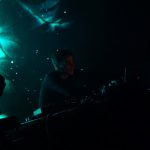 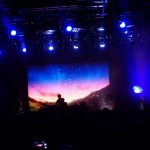 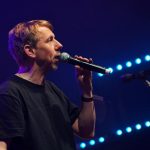