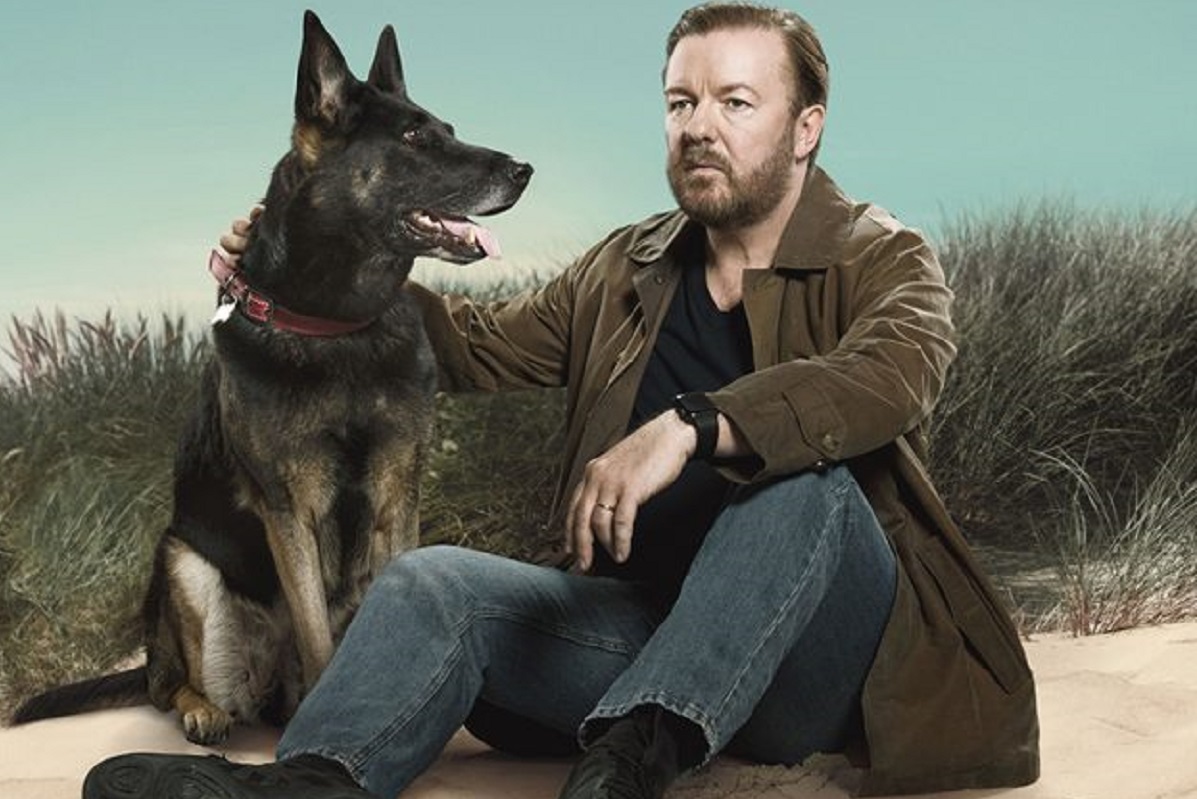 With Ricky Gervais’ latest series After Life new on Netflix, Getintothis’ Nathan Pang looks at a strange career path for a comedian.

Besides the odd dud, Ricky Gervais’ absolute strength as a creative is on television.

Nearly 20 years since the premiere of The Office, it is still the standard by which modern British comedy is measured. His last series, Derek, proved that he could still largely still strike the balance of humour and heart without Stephen Merchant.

And so we reach his latest offering, After Life.

Available on Netflix, After Life follows Tony (Gervais), a recent widower battling grief, who is the closest Gervais has come to writing himself, even more so than the actual fictional self he portrayed in Life’s Too Short.

From the arrogant glean of intellectual superiority, dismissal of other voices (and religion, of course), to his trademark plain black outfit, Gervais is a job title and tragic death away from being Tony. And as Tony’s entire arc is learning how to stop being a dick, it ends up appearing like a 3 hour self-therapy session for Ricky Gervais, to stop being Ricky Gervais.

Tony’s way of grieving is to be brutally vile to anyone who passes, while all those close to him try to pull him back. Although After Life is populated by what appears to be a killer ensemble cast, it’s a show that struggles to look beyond its central character.

Without the talking heads and ongoing drama of its supporting cast that allowed Derek to be more than just The Derek Show, After Life wastes its cast. Ashley Jensen (from Extras) as Tony’s father’s nurse, and Kerry Godliman (from Derek) as his late wife are the only two cast members allowed to push the drama and be funny.

Treating the heady subject matter of depression and grief, After Life revolves its locations and subplots in a slow moving meditation. Though often feeling meandering and aimless, it manages to mirror Tony’s emotional purgatory, that if deliberate, is rather ingenious, and coalesces in the finale once Tony cycles through all of his relationships once more with an altruistic purpose.

After Life is a modestly funny show, but the humour rarely develops beyond “what social faux pas will he commit in this scene?”. I can count maybe three or four moments per episode that induced an audible chuckle. My tears during the finale were much louder than any laugh.

Most of its comedy bounced between a contrived array of village idiots for Tony to make vaguely humorous remarks to Diane Morgan (as a broader version of Philomena Cunk) and Tony Way (with less characterisation than his bit-part as The Fool in Game of Thrones), playing thinly sketched caricatures.

Which is why After Life feels like Gervais at a crossroads. His scripted series have been steadily getting less funny each time, and After Life is a clear example of Gervais deliberately underplaying comedy in favour of drama. And in fact, the first 5 episodes even underplay drama in favour of the final episode’s intense emotional catharsis, to be as hard-hitting as possible.

A bit of a dramatic whiplash to which functionally may move you to tears, but not tears that are quite well earned. Reducing so much of its supporting cast to one-note characters left the show not being grounded in an emotional reality that made Derek and The Office as powerful as they were.

In almost every Gervais series, he has very clear dramatic intentions, and knows exactly how to push those buttons, despite occasionally using shortcuts. He’s still fully capable of drama that matches David Brent’s plea for his job in the series 2 finale of The Office, or Brent’s stunning “why don’t you fuck off” line to Chris Finch, in the Christmas Special. But he hasn’t written anything remotely as funny as Extras, since (in any medium).

And this is why Ricky Gervais should stop writing comedy.

In his early years, he was the uncompromising artist who co-created two stellar hits in The Office and Extras, and has spent the latter half whining about artistic integrity of being allowed to be offensive. His self awareness became self-consciousness.

In the HBO special ‘Talking Funny’, where he chats with three other comics for an hour, he makes an off-putting rant about how he feels he’s cheating if he’s only making the audience laugh, and how he needs to be better than his audience. Jerry Seinfeld, Chris Rock and Louis CK practically laugh at his pretentious neediness.

As a man who desperately feels like his comedy needs to be high art, he spends most of his time in his latest stand-up special Humanity ranting about how he should be allowed to say what he wants (the entire special is basically framed around it), in place of actual jokes, and then just proceeds to read his funny tweets.

His gradual disinterest in creating comedy is apparent not just in After Life, but even in his stand-up comedy. He’s a terrifically talented television writer. He’s a dreadful stand-up.

And yet, the most insufferably self-conscious comedian has made his television writing career a peek into his sentimentalist alter ego, and is always more successful than his off-puttingly arrogant stand up could hope for.

Fyre: The Greatest Party That Never Happened on Netflix – a review

A self-confessed “observational comedian”, there are few comics who spend so much time trying to define their own style. It seems he’s trying to put up the illusion that he hasn’t really changed since his Office days. His best comedy comes from observation, but he stopped observing long ago.

What remains is a drama writer. Any good drama series has jokes and levity, of course he should still write funny scripts. But comedy as a deliberate relief to drama is much stronger than a supposed comedy that is ashamed to be funny.

In 2019, British comedy is Fleabag, Derry Girls and Catastrophe, shows that are confident enough to set their own standard, like The Office did way-back-when.  And After Life simply can’t keep up.