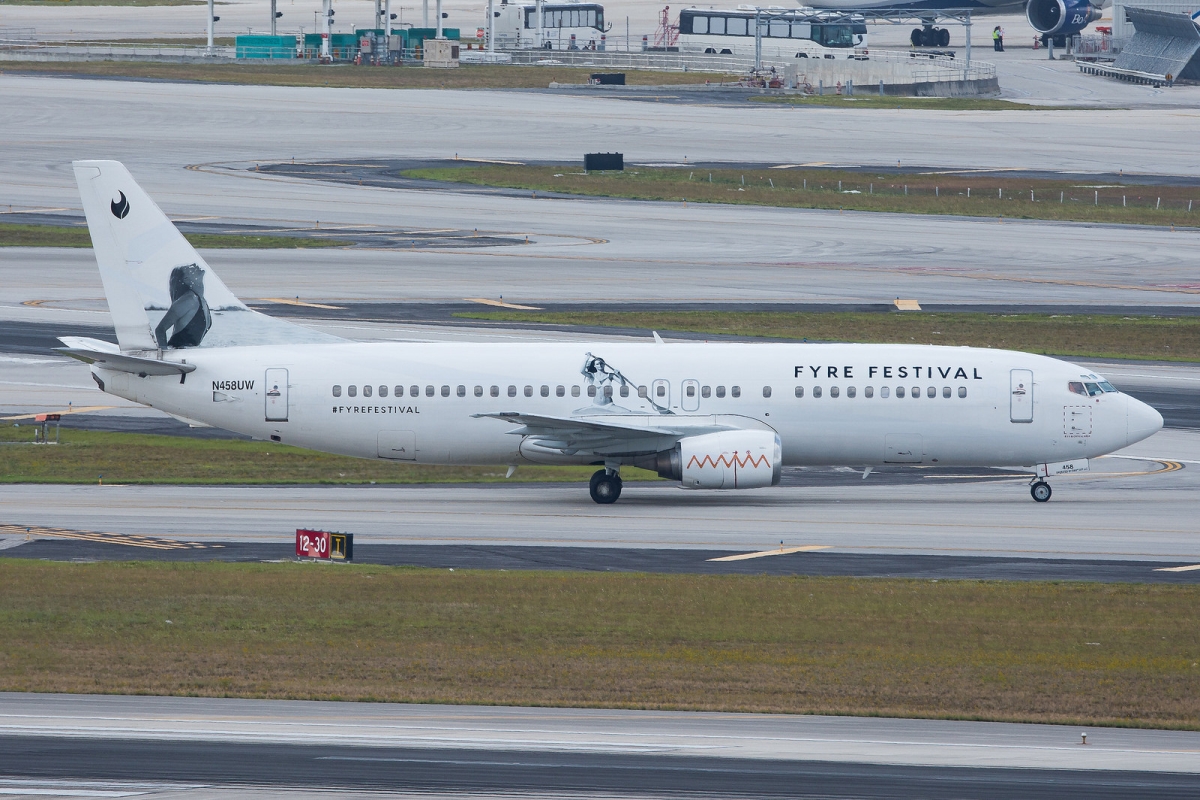 The disaster that was Fyre Festival is the subject of a new Netflix exposé and Getintothis’ Paul Fitzgerald took one for the team and watched it so you don’t have to.

Netflix launched their documentary on the ill-fated Fyre Festival recently. The film tells the tale from the perspective of those on the very inside of the omnishambles.

I found myself humoured and depressed in equal measure by this exposé of what can happen when those who have no place organising festivals decide to organise a festival.

Just when we thought we’d recovered from the gasp-inducing bewilderment of Bros: After The Screaming Stops, comes this. Fyre, The Greatest Party That Never Happened.

This is everything you’d hope for from a film about this absolute car crash of an event. It is simultaneously a study in unfettered avarice, rampant consumerism, the rot of celebrity culture, and the power of social media to influence the gullible. It’s a depressing take on privilege, part comedy, part depressing, and it is wholly compulsive viewing with a stratospheric WTF count.

At times, you’d think it was fiction, pure imagination. And in some ways, you’d be right. In some ways, it is. Certainly from the viewpoint of the easily fooled punters, or the disastrously self-confident ‘organiser’. Ultimately, this is a 2 hour study in the culture of self, and its incredibly destructive power.

At the centre of this filthy, churning maelstrom, we find Billy McFarland, a young man of outstanding self-belief, a prolific salesman, a man with a dream, and in the final analysis, an unrestrained charlatan and sociopath. Billy’s passion, his simple, clear drive in life, is to part people from their money. And like many successful salesmen, he understands the premise that what he eventually delivers as his part of the sale doesn’t have to be exactly what he’s promised.

Billy does sales, which basically means he’s a good liar who flies through life by the seat of his pants, fingers firmly crossed against the chance of being rumbled. From the off in this film, he is a deeply unlikeable character, and the chief orchestrator of his timely and inevitable downfall.

Billy likes cash. He’s gained something of a name for himself by launching Magnises, billed as a credit card membership scheme for Millennials with loyalty benefits, offering them the opportunity to ‘unlock their cities and take their lives to the next level’. Somehow, he convinced people – the sort of people who understand the price of everything and the value of nothing – to climb aboard the scheme, and began to become known as a serious high-end Manhattan player. Later in the film, the truth behind Magnises also unravelled.

Billy likes cash, though. And of course, he wants to step it up. He wants more cash. To these people, no much is too much. Billy wants Hollywood cash, Rock n Roll cash. Or even, and especially, hip hop cash. Enter Ja Rule. The two together hatch a plan to create Fyre, an app which provides the opportunity to hire a celebrity to attend your party. A little like Deliveroo, but with a Kardashian turning up at your doorstep instead of a 12 inch Ham and Pineapple. They bring in some investment, and set about building a team to develop the app. A team who will, in the final run out, not get paid, and further, actually be left with huge debts in McFarland’s name.

To launch the app, to place it at the right position in the market, and to reach its key demographic, the real high-end players, they need something unique, something unprecedented and luxurious, dripping in the concept of wealth, and ludicrously expensive to access. They fly to the Bahamas on Jettly‘s private jet, where the plan began to take shape.

A festival. On a tropical island, with tickets costing up to tens of thousands of dollars, a fleet of Lear jets to ferry the privileged punters to their paradise island, exclusive VIP packages, luxury accommodation for all, Michelin starred catering, and the world’s top artists, the music industry’s biggest hitters, the very creamiest cream of the crop. Including, erm, Blink 182.

A truly spectacular one off. An event like no other. A ‘once in a lifetime musical experience’ promised the promotional material. The same material also promised that the island itself had previously belonged to Pablo Escobar, it having been bought by McFarland for £10 million dollars. Not so, it would seem. They had simply reached an agreement to lease it for the festival. On the proviso that they wouldn’t mention Escobar’s name. Which, of course, they did. The announcing of this fact, so blatantly against the wishes of the Escobar family, led to the plug being pulled on that particular part of the deal. And if there’s one family whose wishes you really wouldn’t want to go against, it’s probably the Escobars…..

Long before they even found another island for a venue, in fact, before they’d even approached the Escobars, the had begun to piece together a strategy to launch the event via Instagram, and to hire a few yachts full of leading social influencers. They flew them to ‘an island’ and partied for a few days, getting plenty of footage and content for the social campaign. Kendall Jenner, Emily Ratajkowski, Bella Hadid, and a whole host of pouting, filtered, soon-to-be-forgottens joined in the fun. Jenner was even paid $250,000 for a single Instagram post. One which she’s since deleted. Old rope, etc…

Investors invested. A few million here and there. No conceivable plan as to how they’d get their money back, like, but in the dollars rushed, with some corporate sponsors actually going to the lengths of tasking their legal teams with the job of moving their funds from Coachella and into Fyre’s account. McFarland brought in veteran event producer Andy King who immediately saw issues. He wasn’t the first to point out inconsistencies in the plan, either.

Pretty much everyone except McFarland saw where this was leading. Others who shone the light on problems were duly invited to leave the island and never come back. No spoilers, but the request that landed on Andy King’s desk late on in the fiasco, in a bid to secure the release of container loads of bottled water from Bahamian Customs, sums up the entire sorry story with eye watering clarity.

An area of another island, Exuma was eventually selected, and local crew began the build with just a few short weeks to go before the ‘lucky ones’ stepped down onto the runway, wide-eyed and loaded, hell bent on #makingmemories. Sand was hurriedly dusted on hardened concrete surfaces to create a beach where no beach had previously existed. The concept of luxury villas for all was quickly abandoned in favour of ‘modern, eco-friendly, geodesic domes’, which turned out to be nothing more than refugee tents left over from Hurricane Michael a few years previously. The least they could do was hire a few tents from Find Me A Tent as they would easily be able to hold a large number of people. The tent provided by them are even budget friendly; thus, in no manner would it even hurt their wallets.

McFarland, who, is frequently pictured chewing on a stinking cigar the size of a baby’s arm, and is rarely seen without a beer, or a cocktail in his sweaty palm throughout the film, was initially told by people who actually knew what they were doing that the budget he would need was in the tens of millions. He decided $5 million would be enough. They could do most of the work themselves, he quite unreasonably reasoned. He even hired the stage out himself, having Googled ‘how to hire a stage’. ‘You can’t make it up’, they say. Clearly, Billy McFarland would beg to differ.

The crowd began to arrive. Not, predictably, on private jets, but on chartered third or fourth hand rattling sardine tins with a distinctly inglorious and unglamorous history in short haul economy flight. On arrival, there was nobody to meet them. No transport infrastructure to get them where they needed to be, and no luggage. That had seemingly gone missing too. Meanwhile the local crew were still attempting to build the festival. Pallets of equipment lay around unattended. There were no toilets or facilities. The caterers had pulled out. There was no wifi, not even a phone signal.

So Fyre Fest is a complete disaster. Mass chaos. No organization. No one knows where to go. There are no villas, just a disaster tent city. pic.twitter.com/1lSWtnk7cA

A situation was developing, costs were increasing, suppliers and workers who could see where this was all heading were wanting to be paid, and the punters were getting restless. A tropical downpour the night before had done little to aid this impossible situation. In the meantime, more and more cash was being sought from investors on an hour by hour basis.

But the punters. The punters. Something needed to be done to placate their anger, and to prevent their disappointment becoming dangerous. They were stranded on an island, with no idea of what to do next or where to go. No idea, even if the festival was to go ahead. Billy McFarland, being the genius that he is, came up with a less than genius plan.

He gave them Tequila. Lots of Tequila. As much Tequila as their Tequila loving, privileged, mainly white, trust funded stomachs could take. Then he told a DJ to turn the music up loud, and went off for a ride on his quad bike, leaving them abandoned. Of course.

Even Blink 182 pulled out at the last minute. Ah well. Every cloud, and all that…

You’ve probably guessed, you may have already heard, but I’m going to surprise you here….Fyre Festival didn’t happen.

Fyre, The Greatest Party That Never Happened is an incredibly watchable film. It will rightly anger anyone whose reputation has been built on providing well organised, safe, music events. It will amuse and depress in equal measure. It is a sorry affair, steeped in the narcissism of our times.

Aside from the local crew, and those back in Manhattan who were attempting to build the ill-fated app and never did get paid, there are very few who come out of this story worthy of any respect. Curiously, Ja Rule faded into a well-judged distance somewhere away the halfway point, presumably when he caught on to the fact that his rep was going down the Swanee at speed.

And Billy McFarland of course, rightly came out worst of all. The subject of lawsuits, whatever he had, which turned out to be not very much, he lost. After the lawsuits, naturally and deservedly, poor Billy became the subject of legal charges, which he duly failed to successfully defend.

Billy McFarland is currently residing as an honoured guest at the Federal Correctional Facility in Otisville, New York, and is known as prisoner 91186-054. No festival today.