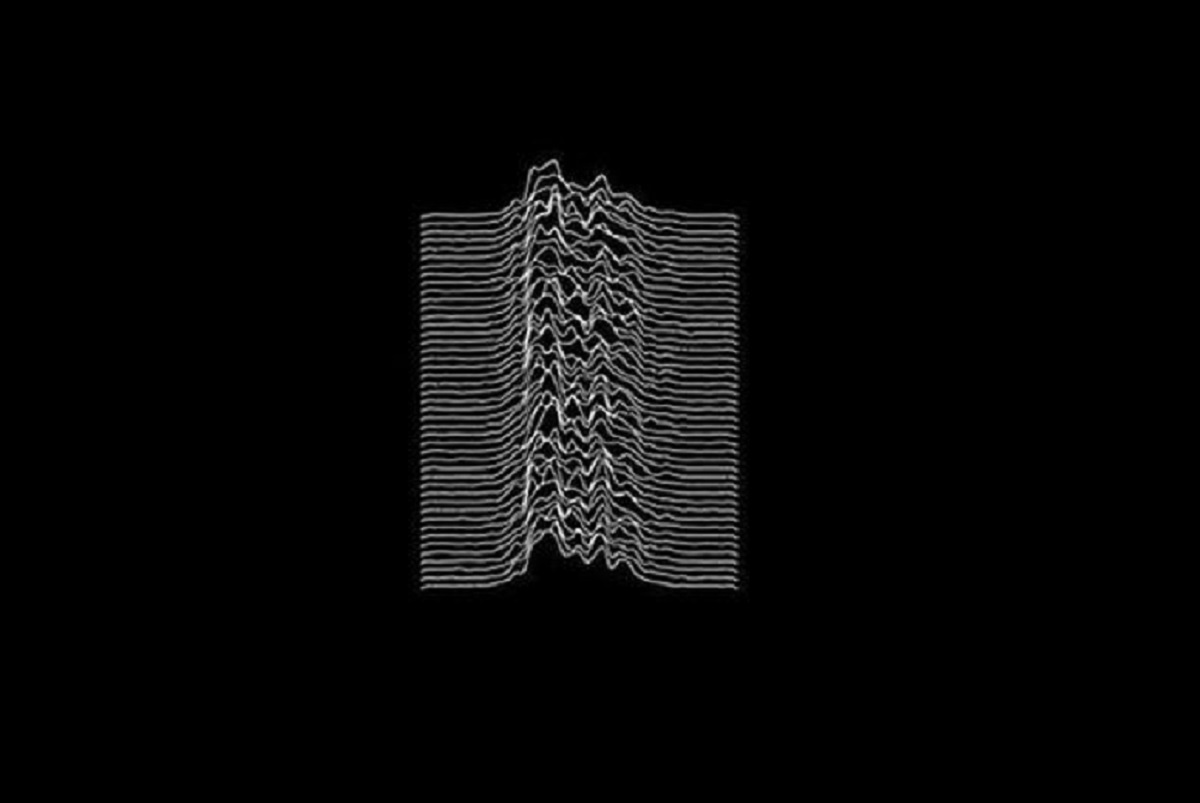 As Joy Division’s Unknown Pleasures celebrates its 40th anniversary, Getintothis’ Banjo offers a personal reflection on one of the greatest debut albums ever made.

Every now and then, there comes along a band whose entire recorded output is a thing of pristine beauty.

If we’re being honest, it is also often the case that the band has a fairly short career, for whatever reason, they never spoil their legend by recording a single song that isn’t perfect.  Instead the short canon of songs that they leave behind are immaculate, much loved, shining examples of perfection.

Joy Division are such a band.

As a fan, I find this is true even of their early songs that never made it onto the debut album, but that are burnt into my memory from hearing them played live.

Their first release was a very limited EP, An Ideal for Living, which captured the band in their punky beginnings.  Only a thousand copies were made and Peter Hook remembers that, even so, unsold copies of the EP lay in piles in various member bedrooms.  Hook has since sold his own copy, autographed by the whole band, for in excess of £13,000.

Apart from this barely noticed EP, the first thing that gave the record buying public a chance to hear Joy Division’s majesty was their debut album, Unknown Pleasures. None of its tracks were ever released as singles, a brave move that spoke volumes of the belief that Factory Records must have had in the band.

These days, this might seem a strange approach, where well-planned promotional campaigns and marketing strategies are the norm, and a trail of singles are released to ‘build momentum’.  But in the heady days of 1978, young feisty labels like Factory either didn’t know or didn’t care about such approaches.

Those of us who were able to attend gigs in Liverpool and Manchester at this time had the chance to become well acquainted with Joy Division through their many gigs in the area.  In fact, one of the most memorable parts of my own gig going life was watching them develop from their punky roots to the towering heights they reached later.

Right from the start, Joy Division stood out.  They were the first band I ever saw at Eric’s, supporting Rich Kids, and me and my friends took to them straight away, like no other band we saw at the time.  Durutti Column were the support band for my next visit, and I can clearly remember us all deciding between us that they were good, but they were no Joy Division.

We saw them every chance we got after that, going from support slots to their first headline gigs, once to less than 20 people.  But those who knew, knew.  We loved them, they were ‘our band’.

But to others outside of this local scene, hearing Unknown Pleasures would be their introduction to the sound of Joy Division.

Once they had shrugged off their punky beginnings, Joy Division developed a sound that, at the time, put me in mind of the likes of Wire and Magazine, the emerging post punk bands.

That said, some of Unknown Pleasure’s tracks show quite strongly that they were birthed in punk.  Opening track Disorder has the energy and pace of punk, but Joy Division were already on a journey that would take them further out.

In our recent interview with Stephen Morris, he told us that “It was punk that kind of gave me permission to do all that stuff, and really early on it was the energy of it. It still is really, you should be piling in a lot of energy, even though Unknown Pleasures doesn’t sound like that now.  It was a great record, but it doesn’t sound like The Clash or the MC5 or anything like that.  But it has got its own kind of energy”

All the elements of Joy Division’s music are already in place on track one.  Curtis’ distinctive baritone voice, Hook’s high bass notes and Morris’ excellent drumming are all evident.  Guitarist Bernard Sumner deserves special credit here too, with his distinctive guitar sound giving the song its hook.  Towards the end of the song, his guitar fades or blurs into almost industrial noise.  Sumner’s guitar playing often gets overlooked, but he is a player of rare ability, creating otherworldly walls of sound that mark Joy Division out as something different.

Day of the Lords and Candidate see Joy Division morphing into something else, casting of the shackles of the past and creating something that is slow, haunting and heavy.  Producer Martin Hannet found the space in Joy Division’s songs and brought it to the fore, creating a sound that gave the songs atmospherics room to breathe and grow.

Hannet said of working with Joy Division “They were a gift to a producer, because they didn’t have a clue” and he was left to create their unique studio sound.  In turn, Peter Hook said of their producer “He was a slave driver, obnoxious, sarcastic, obtuse, never satisfied, arrogant, driven, always knew you were wrong, difficult to work with. Perfect for a Genius!”

However the two poles of Unknown Pleasures rubbed each other up the wrong way, the end results were nothing short of perfect.

Famously, most of Joy Division hated Unknown Pleasures when they first heard it, as they thought it had none of the attack or energy of their performances., only Ian Curtis could see Hannet‘s vision for what it was  These days, they have thankfully revised their opinion, but there is no doubt that the version of the band Hannett created was hugely different to the band people saw at their gigs.

That said, it is Joy Division that shine through on Unknown Pleasures.  It is easy to surmise that with the songs they wrote and with Curtis’ deeply personal lyrics, it would have been difficult to make Unknown Pleasures into a bad album.  But with Hannett and Joy Division coming together, in the right place, at the right time and with the right attitude, they managed to create something greater than the sum of its parts.

New Dawn Fades provides us with our first classic Joy Division song.  For me this was an early standout on the album.  Time lent it a more focused sadness, as it was the track John Peel played after announcing Curtis’ death on his Radio 1 show.

On a personal note, I can remember this very clearly.  For many of us, young as we were at the time, this was our first taste of death.  Sid Vicious had died some time earlier, but he always seemed unreal, far away, more of a cartoon character than somebody we could relate to.  When Ian Curtis died we had, for the first time, lost one of our own.

After seeing him play live, get his autograph in the toilets at Eric’s and knowing that the band were poised for greater things, it was all over, snuffed out in an instant.  As New Dawn Fades filled my bedroom, tears ran down my teenage face.

With the benefit of hindsight it is perhaps too easy to read Curtis’ lyrics and see that he needed help, but, as the people surrounding Joy Division have said, we were all simply too young to know how much it was meant and how we could have responded.

His death was not regarded as a newsworthy event at the time.  Apart from Peel, there was no mention of it from the BBC, it did not make the national papers and was not included in the news.  Even in his local paper, the Manchester Evening News, it merited just three paragraphs away from the front page.  And even then they spelt his name wrong.

Unknown Pleasures never charted and was, shockingly, the only Joy Division album released when Curtis was alive.

Side two of the album, when albums had sides, started with She’s Lost Control, our second Joy Division classic.  With its memorable bassline, this is one of the songs I can remember them playing at Eric’s, along with Transmission and Exercise One.

Curtis’ fascination with epilepsy eerily presaged him developing the illness himself.  The inspiration for She’s Lost Control comes from a woman he worked with in his day job, who was having trouble finding employment because of her epilepsy.

After working with her for a while, the woman stopped coming into the occupational rehabilitation centre where Curtis worked and he presumed their efforts were successful and she had found work.  Later he found out that she had in fact died as a result of a violent epileptic seizure.

Shadowplay, Wilderness and Interzone pick the pace up a little and, yet again, Martin Hannet’s production lifts the songs into another place. Sometimes, for some reason, all the pieces needed to create truly stunning music just seem to fall into place, and that is what has happened with the songs that make up Unknown Pleasures.  Having heard demos and live versions of these songs, I know that they are strong enough to stand on their own, but here they are taken beyond themselves and transformed, honed, perfected.

Closing track I Remember Nothing takes both Joy Division’s aesthetic and Martin Hannet’s love of space to extremes.  A sparse, empty song with occasional violent bursts of noise from Hook‘s bass,  Sumner’s guitar sound redolent of The Stooges, a seldom mentioned influence on Joy Division.

I Remember Nothing sees Curtis lamenting ‘We were strangers for far too long’ and, once again his lyrics reach out to the listener, pull them in and place them at the epicenter of his struggle and anguish.

Throughout the song, glass breaks as bottles were smashed on the floor od the recording studio.  The ferocity of this act and the knowledge that the broken bottles will never be repaired suits the vision that the song conjures up.  A chilling end to a record that can leave you drained after listening to it in full.

I only saw Joy Division one more time after Unknown Pleasures was released, at the first Futurama Festival in Leeds.  the album had brought them to the attention of a much wider audience and I remember feeling the I had lost them, they were no longer ‘my band’.  They belonged to everybody now.

Less than 8 months later, Curtis had committed suicide and it was all over.

It is frustrating to think what would have happened to him and Joy Division were he well enough to stay with us.  Would he have found happiness?  Would he, as some have said, left the band after Closer and become a writer?  What would a third Joy Division album have sounded like?

But without knowing the answers to all of this, all we can do is look back at Unknown Pleasures and its successor, Closer, and marvel.  There has never been a band before or since who have created such dizzying heights from such perilous lows.

Joy Division were sublime, glacial perfection.  And, frozen in amber as they are, they simply always will be.