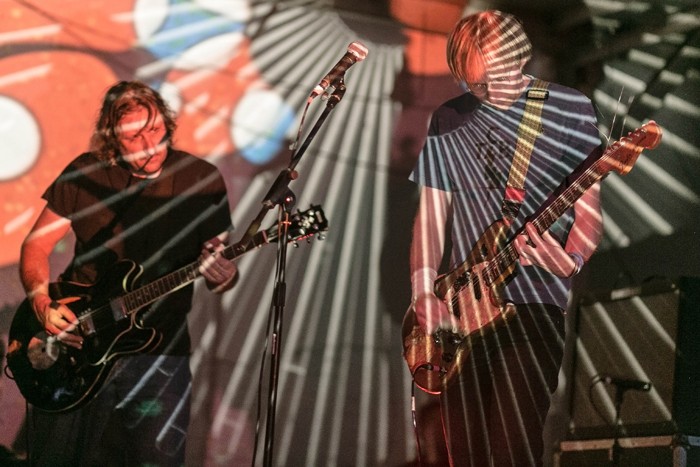 With the news that Kandodo are about to release another slice of cosmic colour, Getintothis Chris Flack takes a look at K3 through a kaleidoscope of psych, shooting stars, synths, and moon dust

If ever a record was designed to tune in and drop out, K3 from Kandodo is surely it.

If you need something to while away the time on a train ride, to drown out the noise of other peoples kids, or your own for that matter, then this, dear reader is the record for you.

Recorded over three years and aided by fellow Heads H O Morgan and Wayne Maskell, the album was recorded in Bristol and on Price’s 4 track. It has Simon Price stamped in it’s very DNA.

k3 continues the trajectory of outer space explorations found on previous Kandodo releases. Their work messes with your balance, throws the world out of focus for a while and delivers expansive vibes blended together to create minimalist rhythms layered with echos, deep tunnels of sound and sonic landscapes.

k3 finds Kandodo searching through the murky depths of synths and bleeps for dronal repetitions of far outer space.  These three psychonauts spend long periods of time drawing you in, it’s head-nodding, fuzzy and layered with glorious strings.

For the most part, we expect albums to come in around the 30-minute mark, anything longer and we start to shift uncomfortably, scratching for something else to do.  If that is your bag then this may not be the record for you.  k3 is all about getting lost in the noise, sans compass or map.

It is as simple as it is deep, engaging as it seems almost wistful, K3 deserves attention and space.  The first track, King Vulture (below) comes in at an impressive six minutes forty-seven seconds.

Its all bleeps, blips, strange unrecognisable sounds, some bass and a lot of guitars bathed in feedback, it is a glorious start to a work of some renown.

Track two, Lapwinger, tricks you into thinking it’s going to be a banger, but it’s a naughty tease at only one minute twenty-three, Everything – green’s – gone clocks in at almost fourteen minutes of cosmic feedback, it’s proper deep space soundtrack stuff.

Settle in for the long haul though, because by track four, Holy Debut, we’re nearing the B side of the record and it’s only getting weirder. Track five, The Gawping Maw is probably the heaviest on the record, deep psychosis in sound, swathed in skuzz and fuzz, synthed to the absolute maximum for total drop out.

Track six, Lounge Core, is a gentler thing, designed to bring you back from the brink of the previous song, but it exists only to get you settled for the mammoth High On Planes / Drifter which clocks in at an altogether alarming forty minutes.

High On Planes / Drifter is what K3 is all about.  It’s like going twelve rounds with an alcoholic heavyweight ex-boxer from the Bronx in a backstreet barroom brawl, it’s all sweat, heavy punches, left hooks, gut-churning, mind-bending, shape-shifting punishment of the most glorious imagining.

It really steps things up a gear as it nears the end, around the point where you know there’s no point in fighting and you should stand tall and take what’s coming.  Its spectacular, masterful stuff.

If your sound is somewhere around The Heads, Spacemen 3, Moon Duo, or Fripp & Eno then you need to add k3 to your shopping list.  It’s out on June 21on fmd.