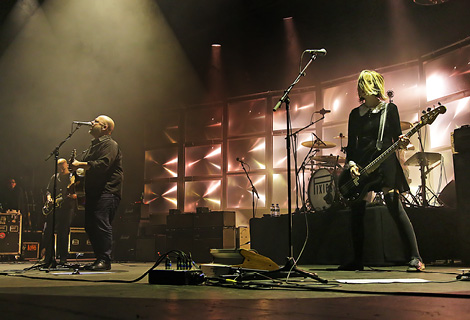 Pixies will return to the UK and Ireland for a full tour in the midst of a new album, Getintothis’ Megan Walder has the news.

Friday 13th is typically one to fear, but in September, it’s one to look forward to.

Following the recent release of their new single On Graveyard Hill, Pixies have announced their third post-reunion studio album, Beneath the Eyrie.

And as the saying goes, third time’s the charm. Still laden with their 80’s predictability (just look at the release date) and ever distinctive loudquietloud sound, Pixies don’t have to rework themselves to feel relevant to today’s audience.

Whilst modern additions to their creative process are interwoven into the fabric of this album (i.e. their It’s a Pixies Podcast, out June 27), they have not lost themselves in today’s music scene, and only continue to impress their ever supportive fans and new followers, who love them for their idiosyncratic attributes.

The band have also revealed a new video for upcoming track Catfish Kate which is to be taken from Beneath the Eyrie.

The clip weaves the bizarre lyrical and visual tale of mountain woman Kate’s simple task to catch a fish for that night’s dinner and was created by Krank! Collective.

Their album launch coinciding with the start of their UK tour, Pixies are set to have a busy September.