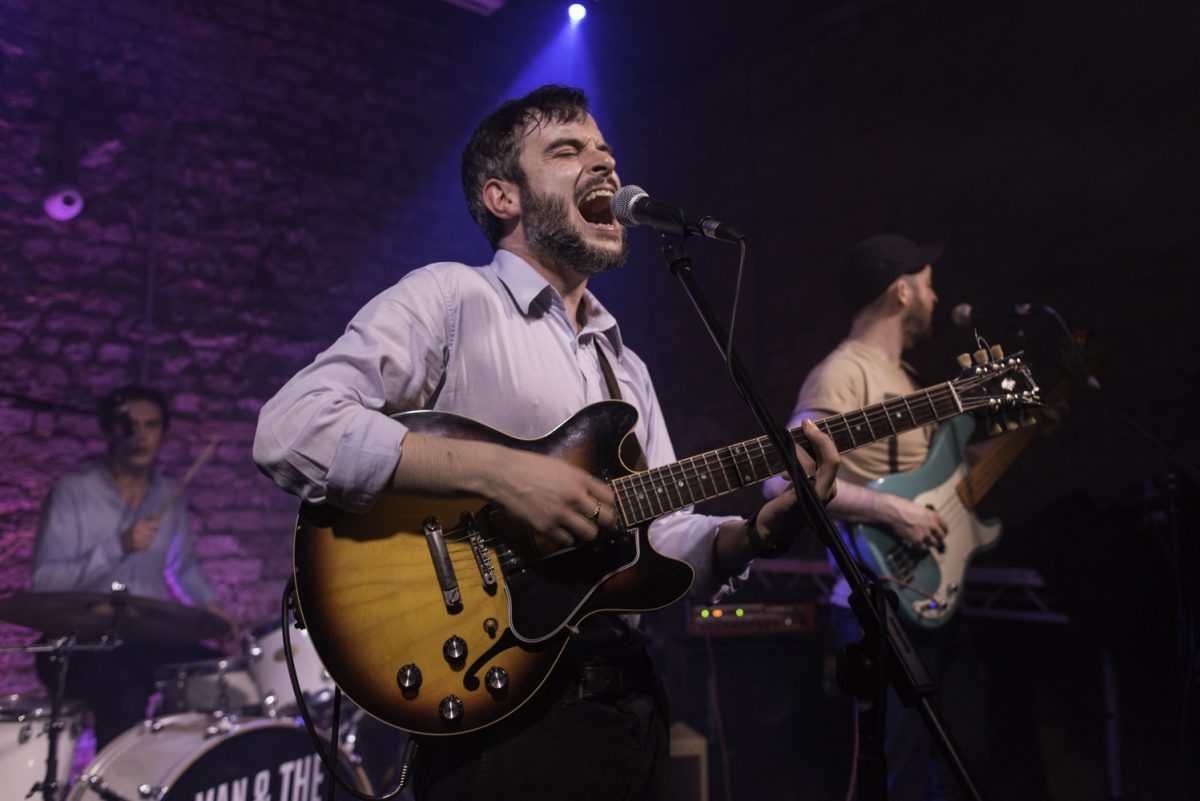 As Man and the Echo prepare to launch their new album with a show at Jacaranda Phase One, Getintothis’ Banjo asked them 13 questions about what’s going on in their life.

Man and the Echo take their name from a poem by William Butler Yeats about a man who pours out his existential grief ‘at the bottom of a pit‘, only to have it echoed back to him

The echo first convinces the man to kill himself but in the end he takes comfort in the company of his own echo; ‘O Rocky Voice, shall we in that great night rejoice?  What do we know but that we face one another in this place?‘

Naming yourself after a Yeats poem is quite a statement.  It marks you out as literate, thoughtful and serious.  Well 2 out of 3 isn’t bad we suppose.

Man and the Echo make catchy, superior guitar music that is fun and straddles genres comfortably.  But serious or dour? Never.

The band have a new album, Men of the Moment, set to be released on August 2 and launch it with a gig at Jacaranda’s Phase One in Liverpool on August 3.

Men of the Moment features cover artwork by, erm, man of the moment Cold War Steve, the collage artist whose satirical work recently featured on the cover of Time magazine, as well as having a giant collaborative artwork at this year’s Glastonbury.

Before this activity, we sat the band’s  Gaz Roberts down and asked him 13 questions.  Read on to find out more about showing off, seeing Steps and admirable checkout assistants.

1.   Where are you and what are you doing?
“I am sat at my desk in the spare room drinking a beer and answering these questions. “

3.   When was the last time you did something you shouldn’t have while drunk?
“I got drunk with Fush (bassist) in Liverpool the other week and bought a couple of cans for the train home, which meant I was then super drunk when I got in. Paid for it the next day. “

4.   When did you last get into an argument?
“I was sat in my car at the side of the road and this boy racer went past and clipped my wing mirror, so I span it round and followed him and he pulled into his driveway just round the corner. I went and told him off and he was really apologetic so then I ended up feeling like an arsehole.”

5.   When did you last shout at the TV?
“When I was watching the last hour or so of the Cricket World Cup final. Unbelievable, didn’t understand a thing that was going on but tremendously exciting. “

Supersonic Festival: review, what we learned and the best bands from Digbeth

6.   When did you last consider quitting social media?
“I’d do it instantly if it wasn’t the primary method we have as a band for communicating what we’re doing. I think it’s such a waste of time, and I’m as bad as anyone for spending hours scrolling through the glibly formed opinions of people I wouldn’t give the time of day to in real life. It has its uses but I think on balance I’d be happier and more productive without it.”

7.   What was the first gig you went to?
“I can’t decide if it was Ocean Colour Scene at the Apollo in Manchester, or Idlewild at the Parr Hall in Warrington. I would have been about 14 I think.

Although there was a disco in town called Frenzy that we used to go to when we were about twelve and I think Steps played at that. And my Mum and Dad took me to see Noel Redding (Jimi Hendrix Experience) demoing bass guitars at a guitar shop in Stockport when I was pretty young so it could be that.

Rich pickings whatever it was. I don’t really like going to gigs that much, which I know is a bit rich for someone who expects people to come to his gigs.

I think when you are a musician you sort of think you have musicians sussed a little bit because there’s not actually that much to it, it’s just showing off for half an hour. “

8.   What’s your hangover remedy?
“Pint of water before I go to sleep.”

9.  What’s your first memory?
“Standing on a rug in my parent’s living room singing The Grand Old Duke of York for my family, showing off.

10.   What’s your guilty listening pleasure?
“I don’t really feel guilty about anything I listen to, I’m not keen on describing music that way,

I don’t like elitism or snobbery around music. People who are like that usually have no idea what they’re talking about and I know because when I was a teenager I was a snob about music and I had no idea what I was talking about.

A lot of stuff that was embarrassing when I was a kid is cool now, I think everything becomes cool after a while anyway.

We play a game when we’re in the van travelling to gigs where we pick a genre of music that we wouldn’t ordinarily listen to and try to do a whole journey listening to that.

We did early 21st century frat-punk and nu metal the other week and we had a great time. Alien Ant Farm went down a storm.”

11.       Vinyl, CD, MP3 or Streaming?
“Mostly streaming. Like the idea of vinyl in practice but always listen to it once and then never again. Can never be arsed getting up off the settee to turn it over.

I like CD, that was the format that got me into music, and I think it sounds the best.

I’m not someone who wets themselves over the hiss and crackle of a record player, or the warmth of analogue, I like clarity..”

12.   Who do you admire?
“The checkout assistants on the self service area at Tesco on Winwick Road in Warrnington.  They don’t give a shit”

13.  Thanks for taking the time to answer our questions.  Is there anything else you’d like to say?
“You are quite welcome, thanks for asking them.

We have a new album out on the 2nd of August called Men of the Moment, available in all good record shops, and we’re doing an album launch show (off) in Phase One in Liverpool on the 3rd of August.

If you pre order the album from them you get 2 free tickets. LP/CD available, LP probably superior now I think of it, given that it’s the more expensive option. “