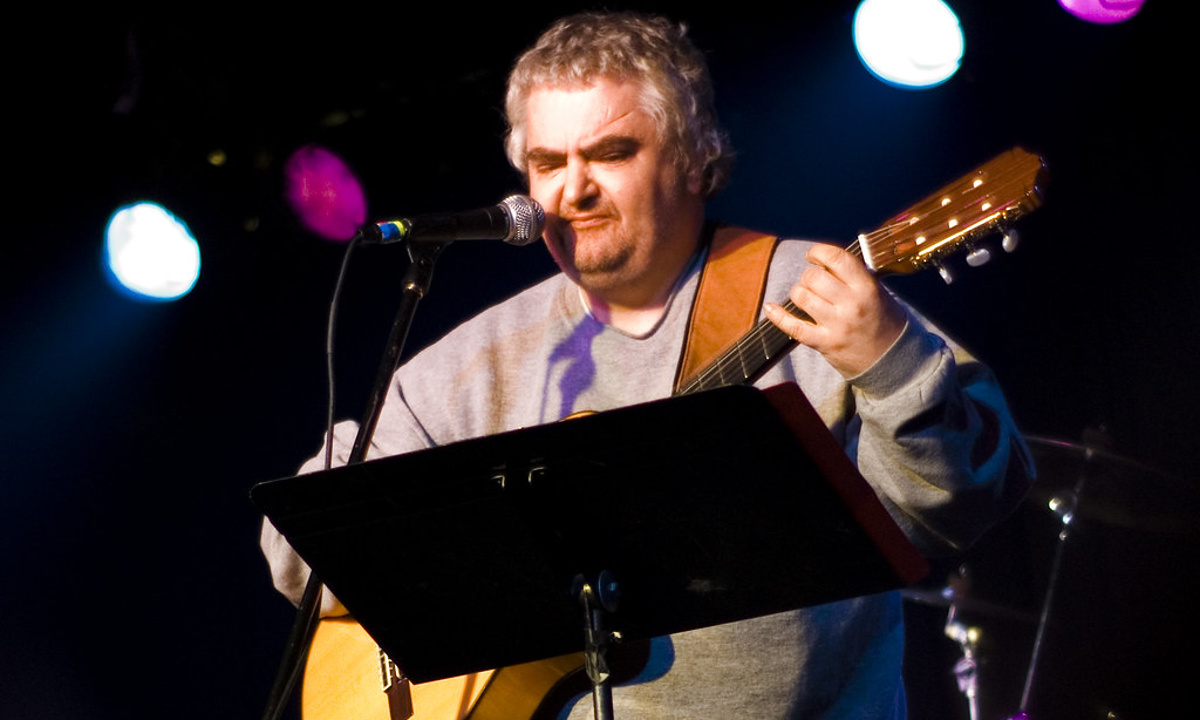 “Mean Girls Give Pleasure”by paulcalypse is licensed under CC BY-NC-ND 2.0

I’d just got back to a friends house after a day of skateboarding, he poured us a pot of jasmine green tea while we sat in his kitchen, clad in charity shop shirts and ripped skinny jeans.

His Mum poked her head into the kitchen to ask how our day was, “Fine thanks”, my friend replied, never a fan of small talk, we had one objective: continue on our path of musical discovery.

We trudged upstairs to his room, our toes poking out of our socks where the grip tape had shredded through our shoes, and then our socks, I slumped in among the clutter, piles of tapes, SNES cartridges, bongos and the occasional house plant, clinging to life.

Sitting amid the creative carnage, I spied a poster on his wall.

A cartoon depiction of a man, he looked cathartic, holding a guitar, his head hollowed out.

A sea of arms held him aloft, each pair of arms belonging to another hollowed-out head.

‘The Devil and Daniel Johnston’ was scribbled in bubble writing above the image, I stood up and took a closer look, “Who’s Daniel Johnston?” I asked, feeling ignorant, as I often did with this friend, always a step ahead when it came to obscure musicians.

Singing the Brexit Border Blues, or how far does that Blue Passport get you?

A few minutes later we were sat in front of a dingy laptop screen watching ‘The Devil & Daniel Johnston.’

Immediately I was immersed in a world familiar, yet unfamiliar, VHS clip after VHS clip of a fresh-faced Daniel Johnston making home movies, toying with his parents, an undeniable urge to create and entertain, and to woo the girl of his dreams.

It wasn’t the VHS clips that were unfamiliar, it was the raw energy, the passion to make something memorable, it filled me up, inspired me, I hadn’t even begun to scratch the surface.

“My name’s Daniel Johnston this is the name of my tape, it’s called ‘Hi, How Are You?’ and I.. I was having a nervous breakdown when I recorded it.”

To this day, I haven’t found a quote from any musician, any artist or writer who has found a combination of words that struck me with such… such… and that’s exactly it, I couldn’t put my finger on it, what was I feeling?

It was light in the darkness, such sadness in a moment of jubilation, an anomaly of emotion.

This clip has repeated over and over in my head since my first screening, accompanied by the haunting ‘Hi, How Are You?’ that appears throughout the iconic record, that would later amass a cult following.

Before me, opened a whole new artistic world, the world of ‘lo-fi’, a world of freedom, of experimentation, of not giving a shit about what anyone thinks of your art or music, and making it because, well, you’d die if you didn’t.

This genre is about pouring your heart out by any means necessary; bare your soul to the world and people tend to take note.

Released just before Hi, How Are You? in the summer of 1983 was Johnston’s fifth self-released tape, Yip/Jump Music, and here we are introduced to some quintessential numbers that illuminate to us some of Johnston’s most prevalent themes.

We are exposed to Johnston’s soulful dedication and obsession with fame and music, in Chord Organ Blues: “For every chord that is played/There is a reward in my heart that is jade/Because my soul loves music/And it loves to hear it made/ Singin’ those chord organ blues.”

And in his unaffected summary of The Beatles: “Everybody wanted to be the Beatles/And I really wanted to be like him/But he died… Four lads who shook the world, God bless them for what they done.”

We’re also introduced to a character that would follow Johnston throughout his career, both haunting him, and providing him with a poetic muse, Casper the Friendly Ghost.

Most likely written as a reaction to his parents calling him ‘lazy’ and not taking too kindly to his work ethic or dedication to art, which wasn’t making him a cent at the time.

The song explores retreating into the eternity of ghosts and of posthumous respect, Casper links to a harrowing experience for Johnston and his father, in which, owing to his mental illness, he was convinced he was Casper while riding in his father’s aeroplane, he took control of the plane and they crashed.

Fortunately, both survived. This may be owing to another character who’s existence (or non-existence) would have a profound impact on Johnston‘s upbringing, God.

The combination of emotions that Johnston conjures up for a listener, particularly when coupled with the details of his struggles with schizophrenia and bipolar, can be overwhelming.

Each song is potent with a purity and sincerity that can often be hard to swallow, and once it’s down, you don’t necessarily want another sip right away, True Love Will Find You, In The End, is perhaps one of Johnston‘s most enduring tracks, it is raw and beautiful in its delivery and upon each listen I feel my heart wrench.

Delving further into Johnston’s back catalogue and history, I found his influence to be woven into everything I would go on to appreciate and enjoy in my late teens and early 20’s.

Bands like Yo La Tengo and Half Japanese made their way out of the woodwork, which led to The Pastels, Neutral Milk Hotel, the movie, Kids, and the infinitely rewarding lineups of All Tomorrow’s Parties.

That night back in 2011, we met up with friends and drank cheap red wine, strummed acoustic guitars, rapped our knuckles on bongos and howled impromptu verses into the night.

We marched the streets aglow with amber, taking deep slugs from the bottles and wandered past a funeral home… “Funeral home! Funeral home! Going to the funeral home!” we began the Johnston-inspired, dark-humoured chant, drunk and full of surprise that such glee should arrive through such a gloomy outcry.

Again, the anomaly of emotion struck me.

Let’s bless him for all he’s done, again and again, and then one more time, with feeling!