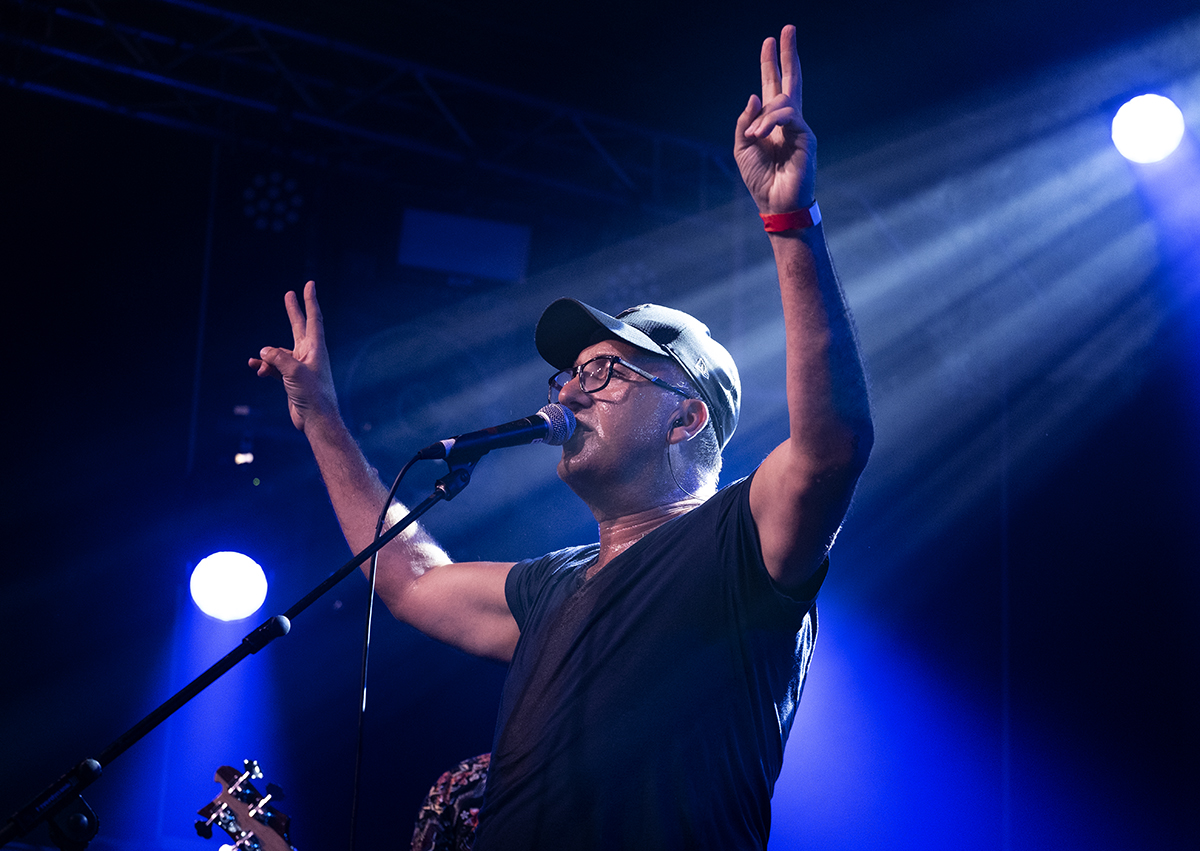 With Autumn fully set in, Getintothis’s David Hughes has selected some tunes to warm you up and feel cosy and some to make you want to go outside and angrily jump into puddles.

Sheffield based Mr Ben & the Bens introduce their new single, Transmission, to the world to show off their next album Who Knows Jenny Jones?, out on 25thOctober.

Self-defined as psychedelic indie-pop, mixed with Chic style bass lines, the brainchild of Ben Hall brings a vintage approach to this modern wave of ‘indie’ music. Transmission brings a surf style riff and guitar sound, merged with lyricism from that of another world.

The song is about a girl from Sheffield called Jenny Jones and how she was abducted by aliens back in the 70s, where the aliens then ‘impart disco knowledge to her through signals transmitted via a sensory deprivation tank.’

It’s all a bit weird, but it’s definitely worth a listen, with a hint of disco to it, with its fast-paced run through the story, you can imagine yourself in the 70s having a bit of a boogie to it.

Mr Ben & the Bens are doing a national tour, unfortunately missing out Liverpool but they’re heading to Manchester and this song is enough for this writer to want to go having heard nothing else from them so far.

Dundee based SHHE introduces to the first sounds of her debut self-titled album, releasing October 11th.

Having released Eyes Shut in September of 2018, SHHE was immediately snapped up by One Little Indian Records, and it’s easy to see why. With a sound in some ways similar to The XX, SHHE makes you feel relaxed and safe, adding a much-needed warmth to your soul needed as we transition into autumn.

Her latest release, Emma, drones and pulsates through its narration to an unhealthy relationship, staying extremely minimal throughout. A single synth, simple drum beat and lack of any real melody from the guitar parts, lay the focus on SHHE’s soft and delicate vocals, allowing the listener to listen intently on the story being told.

Watch out for SHHE’s album when it drops, with it likely to be a hit if the rest of the songs sound anything like this beauty.

Hometown heroes Vile Assembly are back with their latest single Propaganda (out September 27), which points at exactly what it says on the tin.

Vile Assembly are known for their political statements, and Propaganda is no different. This time it’s attack is on the media industry and the way it portrays news stories these days, while addressing issues such as Brexit and that numpty, Nigel Farage.

Lead singer Paul Mason states, “We popped out to the newsagents and bought that morning’s vile offerings (bar The Sun as we’d never buy that piece of s**t), rolled up individual pages and used them as blindfolds. The idea being, the head will sing the lyrics to Propaganda whilst all this media generated miss information fly’s about, with the lyrics to the song representing how we’re manipulated by the media.”

It really is a rallying call for people to stand up against propaganda, so watch this become the official anthem for an anti-propaganda group.

Also, you can see Vile Assembly in Liverpool on October 11 as a part of the Fresh Blood Festival.

Vile Assembly’s Paul Mason talks about the amazing rise of his band and taking to the streets in protest.

Cate Le Bon and Bradford Cox come together to collaborate on Mexican Summers’ Myths 004 EP, out on 1st November. The EP was written and recorded in the space of a week, showing that quality music can be produced on such a short time-scale, which potentially points to this song’s short timestamp.

Secretary is the first track from this EP, a short two minutes thirty look at the boring and repetitive nature of an office job of filing papers, answering phones, eating the same unappealing lunch, repeat.

Perhaps a longer timestamp would suit the lyrical message a bit better, teetering on the edge of it becoming boring.

Despite the nature of the lyrics looking at boredom of work, the song itself is anything but boring, with a progression throughout that grows on the listener each time they hear it, hearing new things each time.

Simplicity seems key in the style that the instruments are played, however, with the build-up of layer over layer of instrumentation, it becomes a bit messy.  Not that this is an issue, it’s a great metaphor for the busy, boring working day.

In a way, it feels quite experimental, in the way that it has been produced, mixed with the layering of what seems a million different instruments, along with the lyrical message. It certainly makes the listener intrigued for the whole EP.

Off Bloom: Are You Feeling It Too?

Anglo-Danish electro-pop trio, Off Bloom, announce their latest single, Are You Feeling It Too? from their debut album, scheduled for release next Spring.

Having previously supported Dua Lipa and ALMA, Off Bloom have announced a European tour, seeing them head to London on  October 23.

This latest track sounds like the sort of thing that you’d have heard at the top of the charts over summer, not that that is a bad thing.

With a groovy rhythm guitar pulsating throughout the song, the introduction of ambient synths and, lead-singer, Mette’s rhythmic vocals carrying the main melody of the song, it has a chorus that will be stuck in your head for a while, sorry about that.

Off the back of this track, it can be expected that Off Bloom are likely to become the sound of summer 2020, so get listening to them now so you can brag to your mates later about them.

These New South Whales: In The Light Of Day

Sydney’s These New South Whales invite us to listen to their latest track from their upcoming album, I Just Do What God Tells Me To Do, set for release on November 8.

These New South Whales are known for their punk sound, yet this offers a sunnier look at them. Vocals sound similar to that of Morrissey (if that’s still a compliment these days), and with riffs not too dissimilar to that of The Smiths, are they a modern day punk version?

Either way, this is a great song, with an interesting video to boot. It struggles to develop much, repeating the same riffs throughout, however that only enhances its ability to get that riff stuck in your head. And if something is that good, why not repeat it, hey?

It would be nice to see them head over to the UK again to play some shows, but in the meantime, they have a tv show on comedy central (pretty weird for band) that looks pretty good.

Blue Hawaii: All The Things

The electronic duo of Raphaelle “Ra” Standell-Preston and Alex “Agor” Kerby have produced a 90s-inspired masterpiece, winding its way through UK garage, house and trance influences, among others.

With a simple, yet fascinating and dance floor ready techno beat pulsating throughout, the vocals supplied by Ra are the perfect overlay, amongst the wacky and weird instrumentation on offer.

The typical piano sound, along with the thin, almost electronic like guitar sound offer that stereotypical 90’s sound, but with the introduction of a saxophone and deep in pitch laughs that can be heard all the way through this three-minute delight, it’s easy to spot new things on each and every listen.

This isn’t the best song to talk about, rather, it’s better for you to have a listen and be entranced yourself. This is going to be THE go-to after party banger, so get your dancing shoes ready.

Let Atlanta four piece Shantih Shantih take you back in time to when life was simpler for some good old rock’n’roll.

The latest track, Radio Dream, from their latest album, out today, makes you believe you’re Marty McFly and you’ve got in a DeLorean back to 1955.

With a sweet, melodic vocal and layers upon layers of ‘doo op’s sitting underneath, the song flows beautifully from section to section, assisted by the phasing guitar and strong 50s style drum beats, with enough time for a crunchy guitar solo mid-way through.

The rest of their music is pretty good too, definitely worth a listen if you’re into your old school rock’n’roll.

Monograms: Don’t Fight For It

The experimental indie-rock band have hit gold with their latest single, Don’t Fight For It, sounding like it’s come straight out the noughties, with its fast paced, electronic sounding drums and synth and electric guitar combination.

The more you listen to it, the more you can pick out little things that can’t be heard on first listen, like the Moby-esque synths midway through the song.

Vocals come from a nasally direction, which leads the song to sound aggressive on some occasions. A heavy bass line, mixed with a repetitive guitar riff throughout lead to it getting stuck in your head for quite a while.

Monograms tour America over the next month, while we’d like to see them head over the pond, as we’d sure love to see them.

Elephant Stone: Land Of The Dead

It’s a less than two-minute dystopian, psych look at what you can expect to hear from Elephant Stone’s latest LP, with the song starting on a Sitar, giving the song a modern eastern feel.

That mood quickly changes with the introduction of a strong bold guitar riff and a strong, but not too heavy drum beat. It has a prog rock feel to it, as it progresses through time and grows, with the sitar being given a solo later on.

Towards the end of the song, all the instruments cut out to reveal an organ and an acoustic guitar playing together, at which points a soft gentle female voice finishes singing the song, a far cry from the male vocal proceeding it.

Look out for the album next year, as it’s set to sound rather interesting if this track is anything to go off.