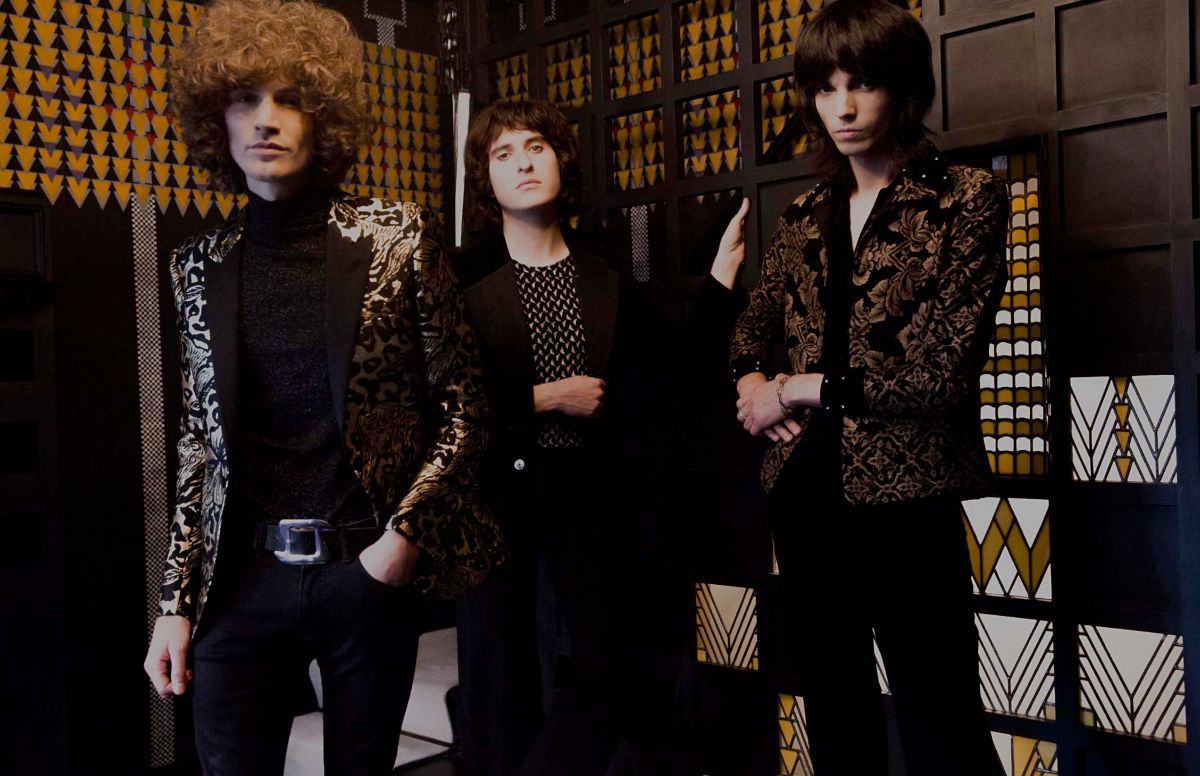 As psych-pop-glam-rock darlings Temples release a third album, Getintothis’ Cath Holland talks with frontman James Bagshaw about the birth of a new era.

It doesn’t feel like the new record from Temples is merely their third.

A band with a knack of creating such tuneful, anthemic songs with a romanticized, pastoral haze are timeless. Like they’ve always been around.

Nevertheless, Hot Motion out on Friday, follows debut Sun Structures, led by the marvellous Shelter Song, which launched them with fanfare in 2014, and the more electronically orchestrated Volcano two years ago.

The phrase sounds like something a zoned out prog ensemble from decades past would announce for whimsy and drama, but to Temples, Hot Motion marks genuine distinct changes.

And the practicalities of creating music shifted for the better, in the form of a new recording space.

A mixed bag of experiences for them, yet the notion of a fresh phase underscores Temples’ very identity, one set apart from the clichéd guitar all-male band tradition and tropes.

They enjoy reading and playing chess, eschewing rock n roll debauchery; Hot Motion’s cover features them posed by a Victorian mural of figures from history, art and creativity, The Greek god Pan to Shakespeare, in their local theatre in Northamptonshire.

‘We’ve always liked those fine art depictions of things….we wanted to be on the cover but we didn’t want to be standing Ramones-style next to a brick wall!’ jokes James.

When we talk about the band’s new drummer Rens Ottik, the frontman tells of how they met when Rens’ band Pauw were ‘on the same bill’, uncomfortable at the idea of referring to fellow artists as the support.

So no, Temples are not your typical guitar band, psych or otherwise.

2019 is an interesting time for guitar music, the rumours of its demise have been grossly exaggerated for quite some time. Indeed, it’s undergoing a renaissance. Making Hot Motion hasn’t reignited the group’s love for the guitar, it was always there anyway, but this album is, James says, a return to why the Temples made music in the first place.

It’s made from the heart, any fussy layers are dispensed with.

‘We’ve made a very selfish record,’ he admits. ‘Bands fall in the trap, we did on our second album, where you’re aware after the release of your first record you didn’t have a fanbase before that, then suddenly you have fanbase.’ 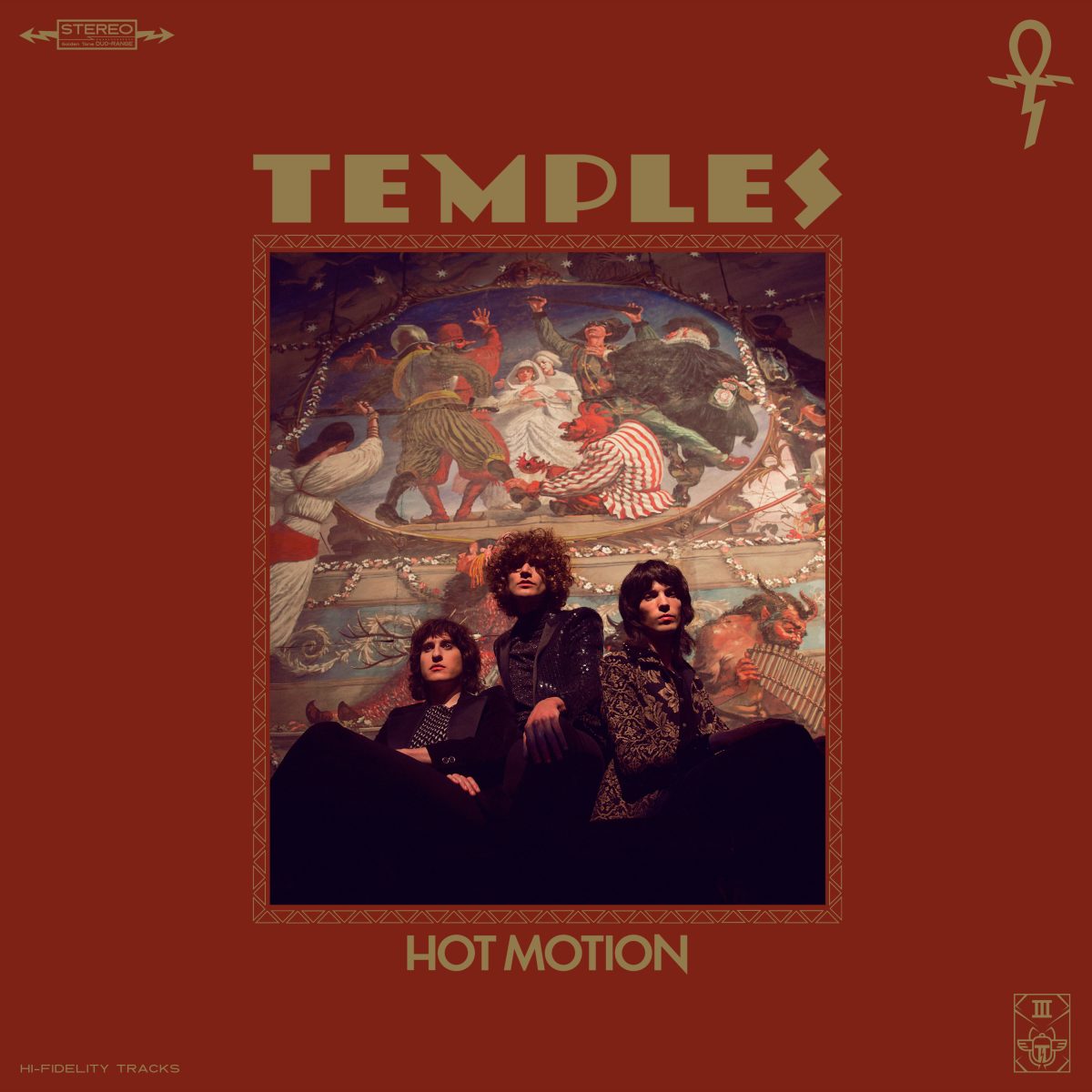 With the new release, a big part of them wanted to rebel against what people’s expectations are.

The idea of conforming, irked.

‘This record was like making the first record, there was no concept of us having any fans, we didn’t think about it. It’s quite a pure record in that sense. Now we’ve got tracks out and people are connecting with it and the selfishness isn’t there anymore.’

When recording second album Volcano, he sounds a little annoyed with himself.

The problem was ‘we came up with a chord progression then we’d have it on four different instruments then the bass line would be backed up with a synth bass following the same thing and suddenly you can’t identify some of the instruments because there are so many layers and the integrity of each part is lost or diluted.

(Hot Motion) a multi-track record, some of them have 35 tracks on but everything’s there with a purpose.’

The new work is abundant with tunes, earworm choruses, the difference this time is that there’s less fuss, more room to breathe. The fresh approach left space for James‘ voice to be grander, does he think? It’s clearer, braver on tracks like You’re Either On Something, and on Context, and even on Monuments, a more romantic, dreamy affair.

‘With this, there’s a full range of vocal sound, with the first record it was a bit more lo-fi with the vocals recorded through a ribbon mic that has a certain quality to it. This was done with essentially the same mic that Scott (Walker) would record through, Sinatra, so it seems a shame to bury that in the mix when you’ve got such a pure smooth sound.’

Is it not the case you’re more confident as a singer now?

‘Possibly but I still don’t class myself as a singer. ’

‘If I had my way I’d just play guitar…I’d just be able to tear into the guitar more!’

The less is more approach to recording sat well with the band, but that’s not to say there hasn’t been some experimenting going on. Hot Motion comes to us via multi-coloured vinyl, and cassette, the latter format paid tribute to on the record itself.

‘Some of the sounds on the record, on the start of (title track) Hot Motion, the guitar sound is meant to be what I used to record on, which is a tiny little dictaphone mini cassette and it has this wobbly quality lo-fidelity. So it’s a little bit of paying homage to those forms of recording.’.

A big part of Temples’ third era is moving from recording in a bedroom to a living room to a dedicated space, a 300-year-old outbuilding tacked onto the side of James’ house.

‘The main difference this time was, to record a guitar part we didn’t have to move the sofa out of the way! Everything’s in the room, ready to go, plugged in. As inspiration comes, you can hear what you want to do next and you know what piece of gear to go to get that.I’m a bit of a collector with studio stuff anyway,  if I want a full bass sound then I don’t want to use a guitar pedal, I know the unit to use so then it’s just a case of plugging in, getting an idea down as soon as you’re thinking about it really. It was instinctive really, there wasn’t a lot of faffing around, most of the decisions were made with purpose.’

At first, the building was in a very basic state.

‘It was a dank, damp garage essentially, but I noticed as I walked into the room straight away, “right, the drum kits go there..”. It took about a year to get sorted, the roof replaced, then I did the rest of the stuff by myself. I wanted it the way I imagined it. It’s still not quite finished, I still need to put some skirting board up. But that’s not going to affect the tone of the album so I thought, it’s better to start recording.’

We talk a little about contemporary guitar music, and how the decidedly poetic Temples fit into that landscape. ‘There’s definitely a post-punk thing going on, noisy guitar bands, but there seems to be a lack of…melody,’ is how James words it, carefully.

He does makes a salient point. Idles and Fontaines DC fulfil their role of firing up the ire within the angst-ridden teenager in all of us very well, but sometimes you’re just not in the mood to be shouted at.

‘For me, the lyrics have always been a secondary thing, the melody is the thing which always gets caught in my head,’ he says of his own songwriting. ‘The melody tells a story as much as a lyric a lot of the time, and I think there’s something lost if you don’t have a melody.’

The big song on the album surely is You’re Either On Something. Its melody is as pretty as hell, yet the narrative of the song adds both an edge and vulnerability. It asks the question about why some people have that sense of security about them, carefree when others are more anxious.

I can’t help but ask, which one is he?

‘Definitely anxious. (laughs). It’s written from my perspective but at the same time it doesn’t really answer the question, the statement isn’t resolved in it for me. Somebody else on a night out or at a gig and they seem carefree, but I wonder is that person taken something to be so joyful and appearing so carefree or are they just wired that way, they just have one beer and they’re comfortable. It’s the thing, why don’t I feel as comfortable as that? Sometimes I’d feel comfortable, if you get anxious then sometimes the last place you want to be is in a crowded room.’

How does having an anxious side to one’s nature marry up with being a lead singer? Temples aren’t exactly known as wallflowers on the performance – and clothes – front, are they?

‘It’s different, you’re up on a stage there’s some protection behind that (laughs) also you’re up there doing the thing that you do, your art that you create, so any anxiety onstage is usually caused by technical errors or a guitar not playing in tune. Whereas if I go to a gig and watch a band, the last thing I’d do is stand right in the middle of the pit, I’d watch from a distance!’

When I ask him where they got new drummer Rens from, James quips, ‘eBay. Very expensive in the Deutschmark.’ He corrects himself. ‘Euros.’

On Hot Motion, Rens makes his mark, on The Howl he taps out a tight military march and turns The Beam into a magnificent Bolan-esque stomper.

‘You either have virtuoso drummers with no feel or trashy people that can’t keep time, he’s somewhere in between, the perfect mix. It came at a time when we needed a new drummer and there was no question about who it was going to be,’ James explains.

With the addition and bold new material, the third era concept sounds right.

There have been lots of changes for Temples, but it’s a natural progression. They kick off the UK in-store appearances this week, then it’s off to Europe, boomeranging here for a short tour and in the New Year, they return to America.

James and the rest of the band relish the audience hearing Hot Motion, personally and otherwise.

‘This record is definitely designed to play live,’ he says firmly. ‘It feels in my comfort zone.’

Hot Motion is released on 27 September, in-store appearances and UK tour dates are as follows: