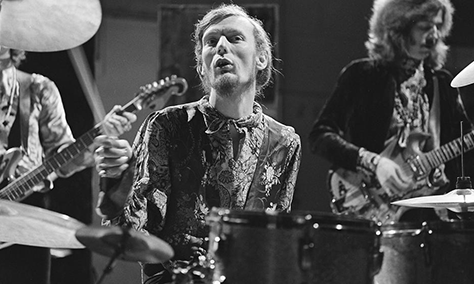 Ginger Baker, one of the most innovative, volatile and influential drummers in music, has died aged 80.

Cream co-founder, Baker‘s style combined the swing of jazz with the brutal power of rock with critics hailing him ‘a human combine harvester‘.

Alongside the likes of Led Zeppelin‘s John Bonham, The Who‘s Keith Moon and jazz legend Buddy Rich, Baker is among the very top tier of contemporary music’s legendary drummers.

However, it was his temperamental and sometimes violent behaviour which led to his notoriety – with on stage punch-ups a frequent occurrence during his live career.

Nicknamed Ginger for his flaming red hair, he was born Peter Edward Baker in Lewisham, south London, in August 1939.

He gained early fame as a member of the Graham Bond Organisation alongside bassist Jack Bruce – who they both teamed up with Eric Clapton (who had previously played with the Yardbirds and John Mayall) to form one of rock music’s first ‘supergroups’, Cream.

Founded in 1966, Cream fused riff-laden blues and wild psychedelia penning classics including Strange Brew, Sunshine of Your Love, Badge, White Room and I Feel Free – plus Toad, from debut album Fresh Cream, which features one of the first ever drum solos.

They sold more than 35 million albums and were awarded the world’s first ever platinum disc for their LP Wheels of Fire.

Along with the fellow experimental trio, The Jimi Hendrix Experience, the band made improvisational rock into a global phenomenon with their live shows famous for their freewheeling solos and dizzying percussion sessions.

On playing live, Baker said: “It was as if something else had taken over – you’re not conscious of playing. You’re listening to this fantastic sound that you’re a part of. And your part is just… happening. It was a gift, and we three had it in abundance.”

But the volatility that fuelled their performances often spilt out on to the stage with Baker and Bruce‘s arguments often turning into violent brawls – even driving Clapton to tears on one occasion.

The band split after just two years and four albums with a farewell concert at London’s Royal Albert Hall in 1968.

“His playing was revolutionary,” said iconic Rush drummer Neil Peart. “He set the bar for what rock drumming could be.”

Following the split, Baker teamed up with Clapton and Steve Winwood to form Blind Faith, followed by the ambitious 10-piece Air Force, which combined jazz and Afro-fusion.

Top Ten – funky drummers and the world’s most sampled drummer

The drug-related death of his friend, Jimi Hendrix, saw Baker leave London to live in Nigeria, where he recorded with Fela Kuti and help Paul McCartney record the classic Wings‘ album Band On The Run, although their relationship soured over claims that he was never paid.

In the 1980s, he played with John Lydon‘s Public Image Ltd, while a documentary, Beware of Mr Baker, was made about his life in 2012.

He is survived by his three children, Kofi, Leda and Ginette.

The world of music reflects on Ginger Baker

We are very sad to say that Ginger has passed away peacefully in hospital this morning. Thank you to everyone for your kind words over the past weeks.

Like Hendrix, Ginger Baker was a name synonymous w/ early days rock. Once you heard him play, saw pics & footage, he seemed to embody the music’s power, the culture’s adventure. Spending a day w/ him in 2014 magnified it all. Lost a big one this morning. pic.twitter.com/nNc5teVfl5

RIP the music giant that was Ginger Baker. The beat behind too many favourite songs from Cream, The Graham Bond Organisation and Alexis Corner's Blues Incorporated. (If you haven't seen the great doc 'Beware Of Mr Baker' do check it out) pic.twitter.com/2ZaJcbcmK2

RIP Ginger Baker. Even if he'd never hit a single drum, he'd have been in Rock N Roll Valhalla just for the way he looked… #dude pic.twitter.com/lqlVEctjLX

So very, very sorry to hear this…..Fly high Ginger! You were a one off and and a true legend…We were honoured to work with you…RIP 😢 x

RIP the great Ginger Baker. The reason so many drummers wanted a double-bass drum. #GingerBaker pic.twitter.com/FXXWsxmsqo